Strata of the Slow, Buried Trench is the first institutional solo exhibition by Moscow-born, Brussels-based artist Marina Pinsky in the Netherlands. In her artwork, Marina Pinsky draws inspiration from any time, place or culturally encoded object she encounters. When invited for a solo exhibition at Vleeshal Markt in Middelburg, Pinsky, who previously studied photography in Boston and Los Angeles, turned her lens to this former meat hall, and the city in which it finds itself. Working her way carefully through the material, her methodology is like that of an archeologist unearthing a site, a detective scrutinizing a crime scene, or, in fact, a sculptor giving animated form to inanimate matter. That is to say, with a slowness that one does not often associate with photography — although Pinsky’s photographs manage to slow down the viewer’s gaze through layering physical material and virtual content.

Pinsky moves between photography and sculpture, staging objects and scenarios to be photographed, as well as creating sculptural work. In The Originality of the Avant-Garde (1981), Rosalind Krauss points out that some art forms such as photography and sculpture are not concerned with the concept of authenticity. The original work (negative or plaster) is not the final product and was never intended to be. We place more value on reproductions created closer to the “original” mold or negative, and, importantly, made by the artist’s own hand — but does it really matter?

Throughout Pinsky’s past works, sequential reproductions of hands appear again and again, repetitively enacting varied systematic activities. In the series of black-and white photographs Instruction Manual, 2013, a pair of hands is depicted in the act of trying to pick a lock. In another series of photographs, Woman and Child, 2016, one pair of gloved hands is directing the movement of another hand in what turns out to be a fingerprinting demonstration for children by the Brussels police. In a 13-minute long digital film, we see various hands touching a scale model of the city of Basel, slowly decoding both the miniature forms representing the city and the accompanying Braille descriptions. These sets of images can be read as ciphers for Pinsky’s own working method, and as instructions for how to look at the world around us; with a slowness and depth that counters the acceleration of most contemporary viewing.

At Vleeshal, Pinsky presents new works — both sculptural and photographic — that she has specifically developed over the last year in response to the former town hall with its meat market. When the town hall of Middelburg was built in late Gothic style, from 1452 to 1520, the city was economically booming, due to a direct connection to the sea which made intensive international trade possible. The sea arm was called “Het Sloe”, in some old English-language books and maps of the area referred to as “The Slow”. Ships passing the sluices and the bridges of The Slow had to pay with a special type of coins, entitled “bakenloodjes” (beacon weights). This alternative economical system disappeared in Middelburg with the silting up of the sea arm. Another symbol of the city’s economic power regressing was the amount of eagles kept in the cage in front of the town hall. In 1700 there was only one eagle left, whereas at earlier, more prosperous times there were up to five—supposedly used to test the meat that was offered in the hall and fed with the leftovers of the slaughter.

For her exhibition, Pinsky metaphorically unearths the trench now buried under filled-in land, and brings in her version of meat stands, sausages and knives. The counts and countesses, who reigned over Zeeland between the 11th and 16th centuries and are positioned on the outside of the town hall in the form of sculptures, will also enter the stage. Pinsky photographed these sculptures, and juxtaposes their projected images with the four sculptures that are placed inside of the Vleeshal. The visitors are invited to join a conversation on past, present and future ways of seeing. 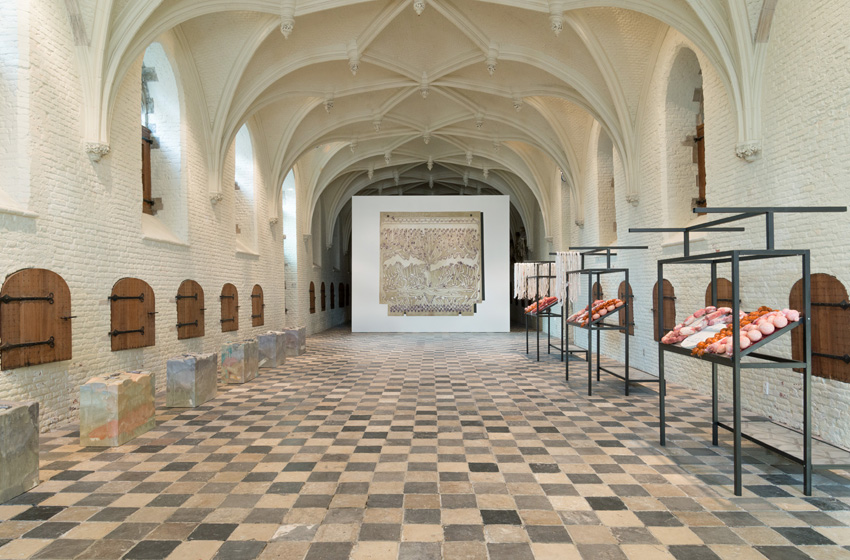 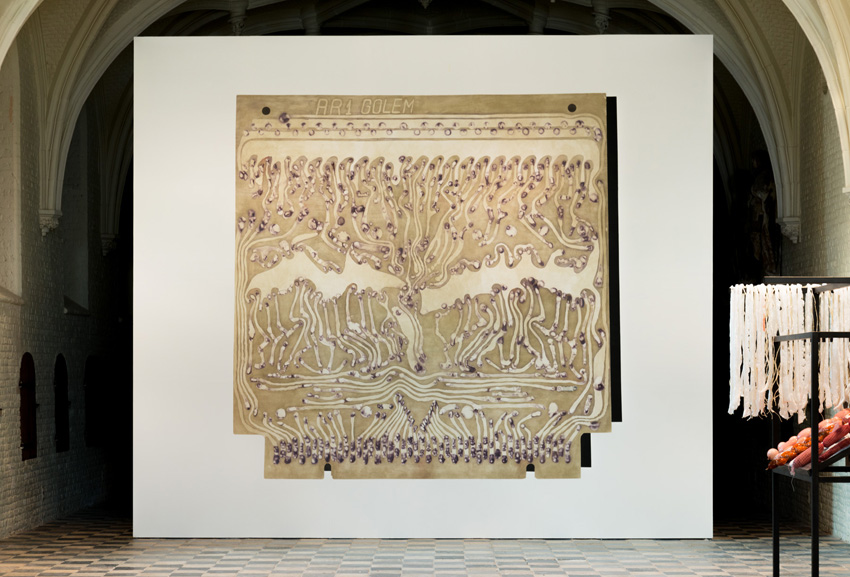 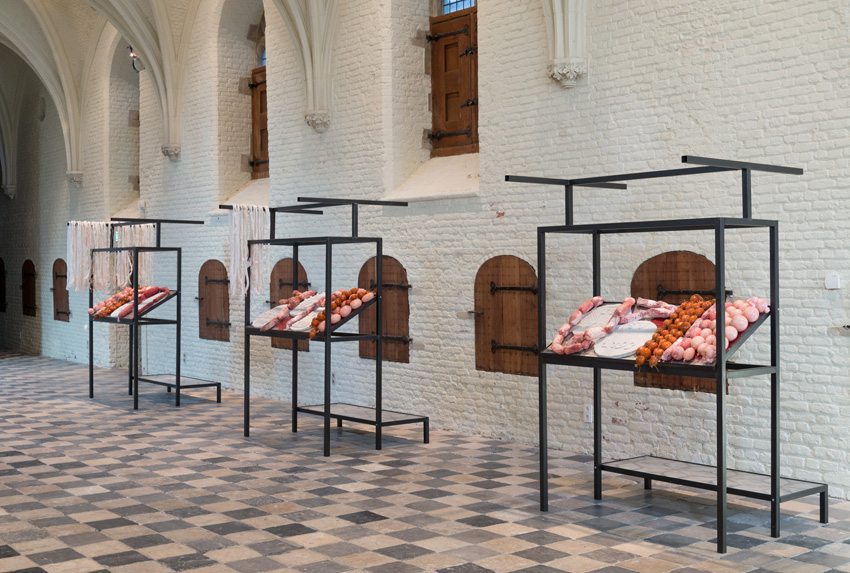 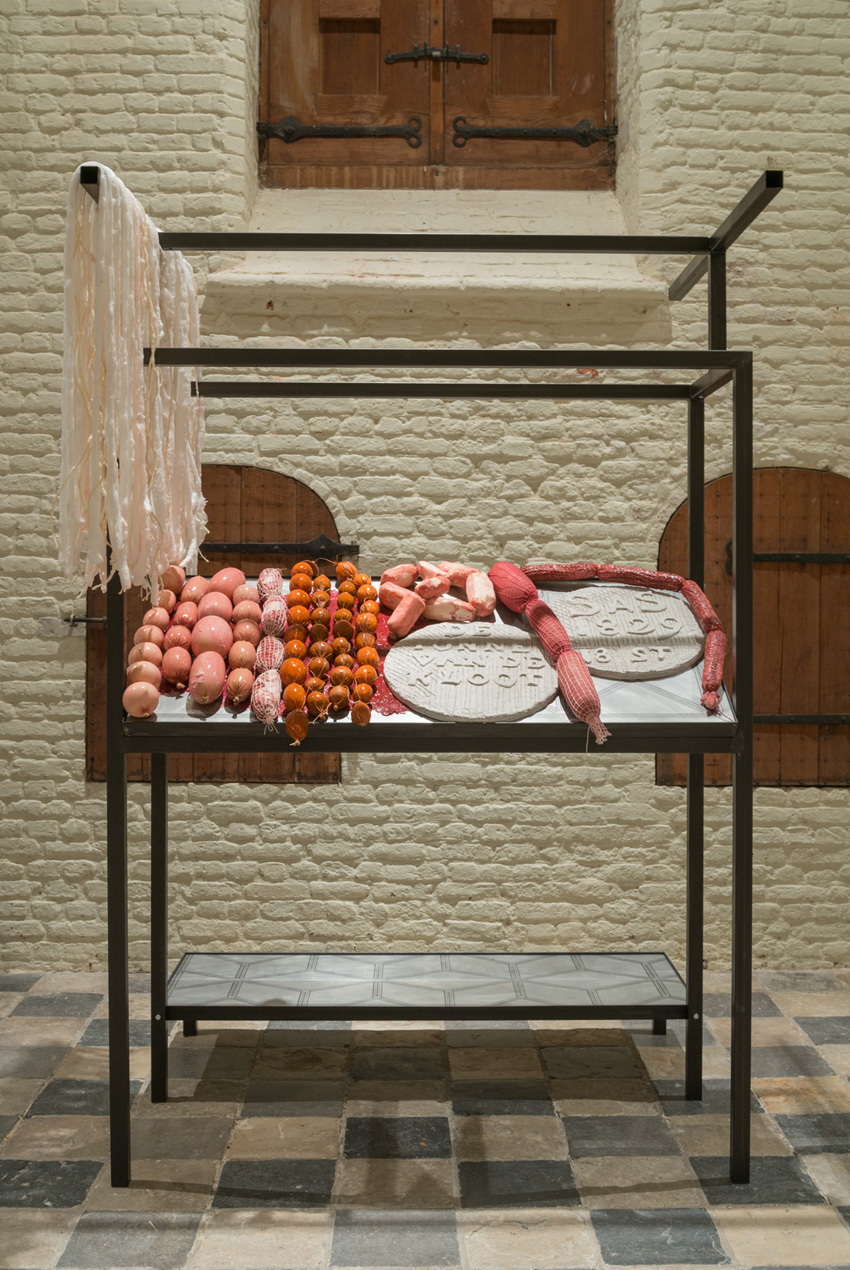 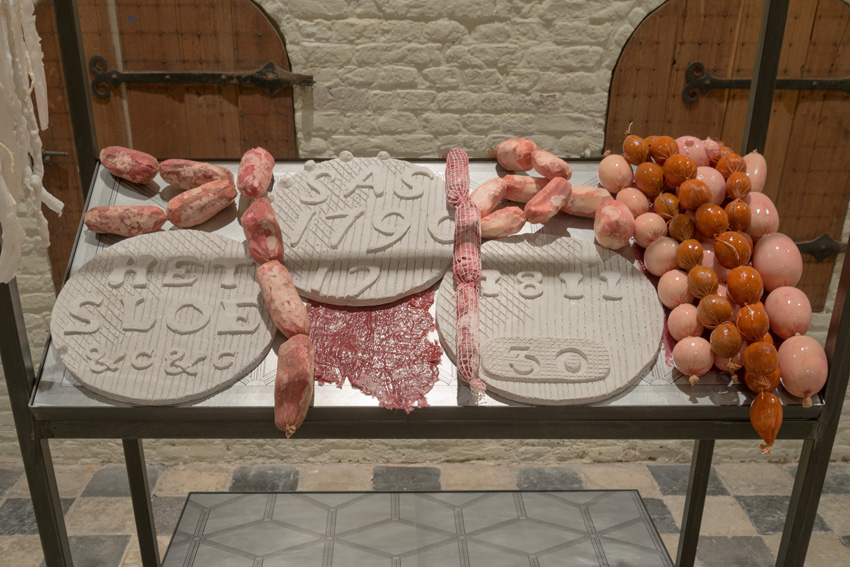 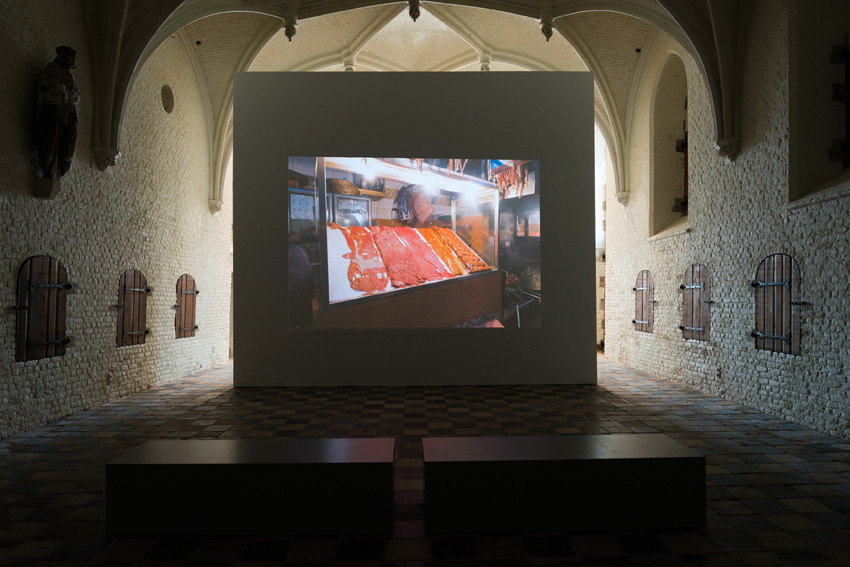 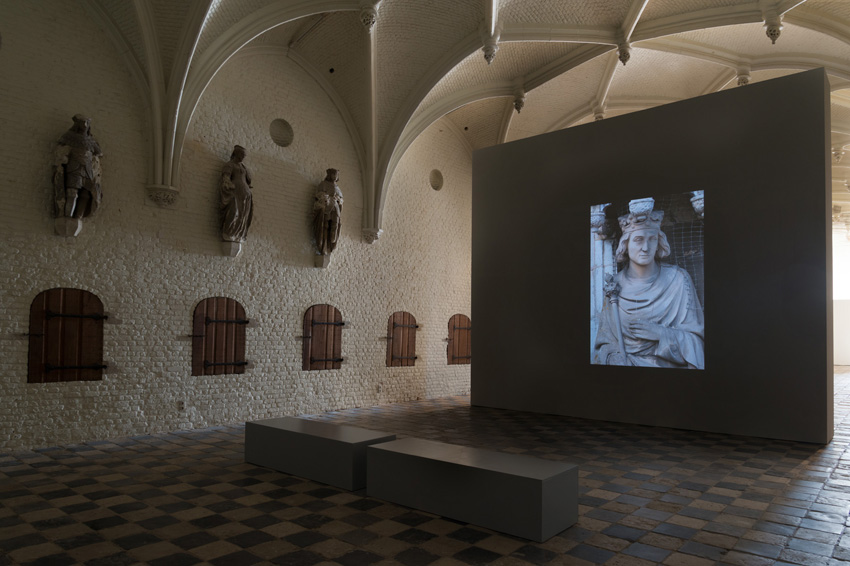 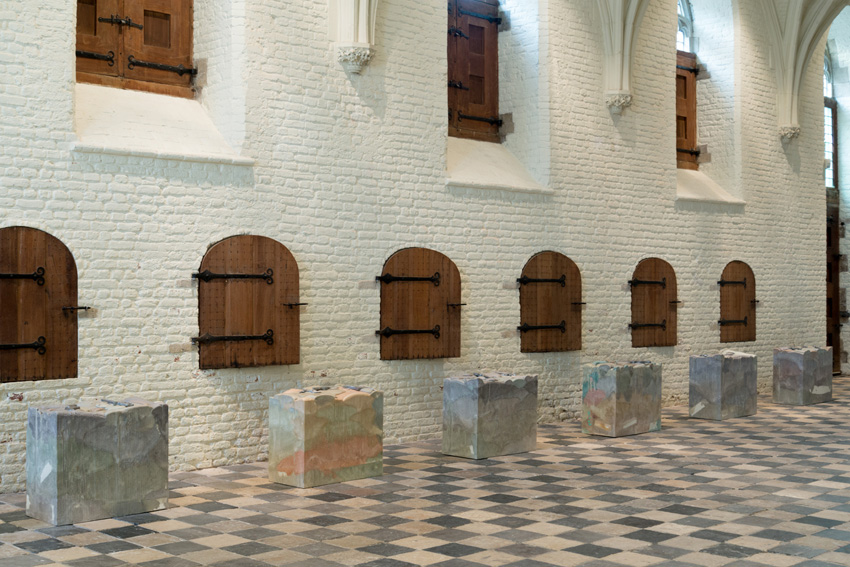 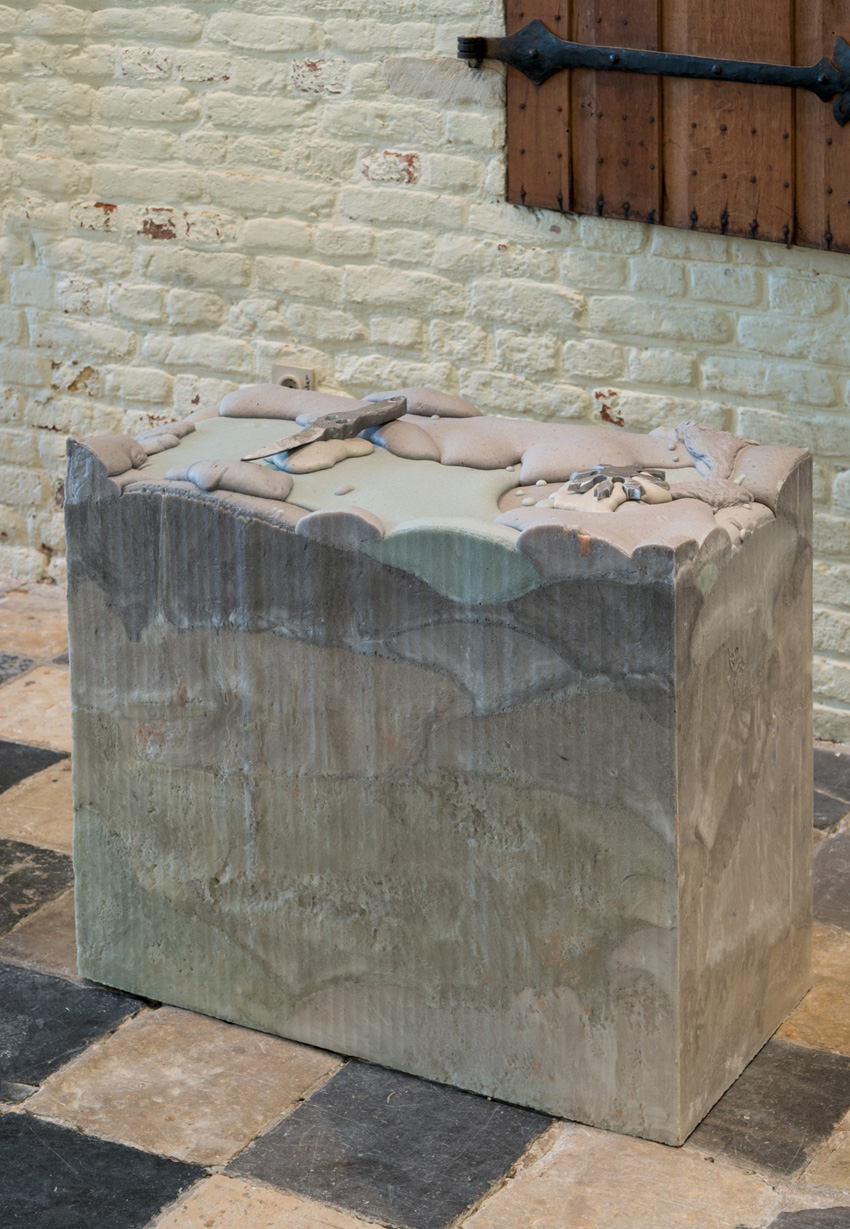 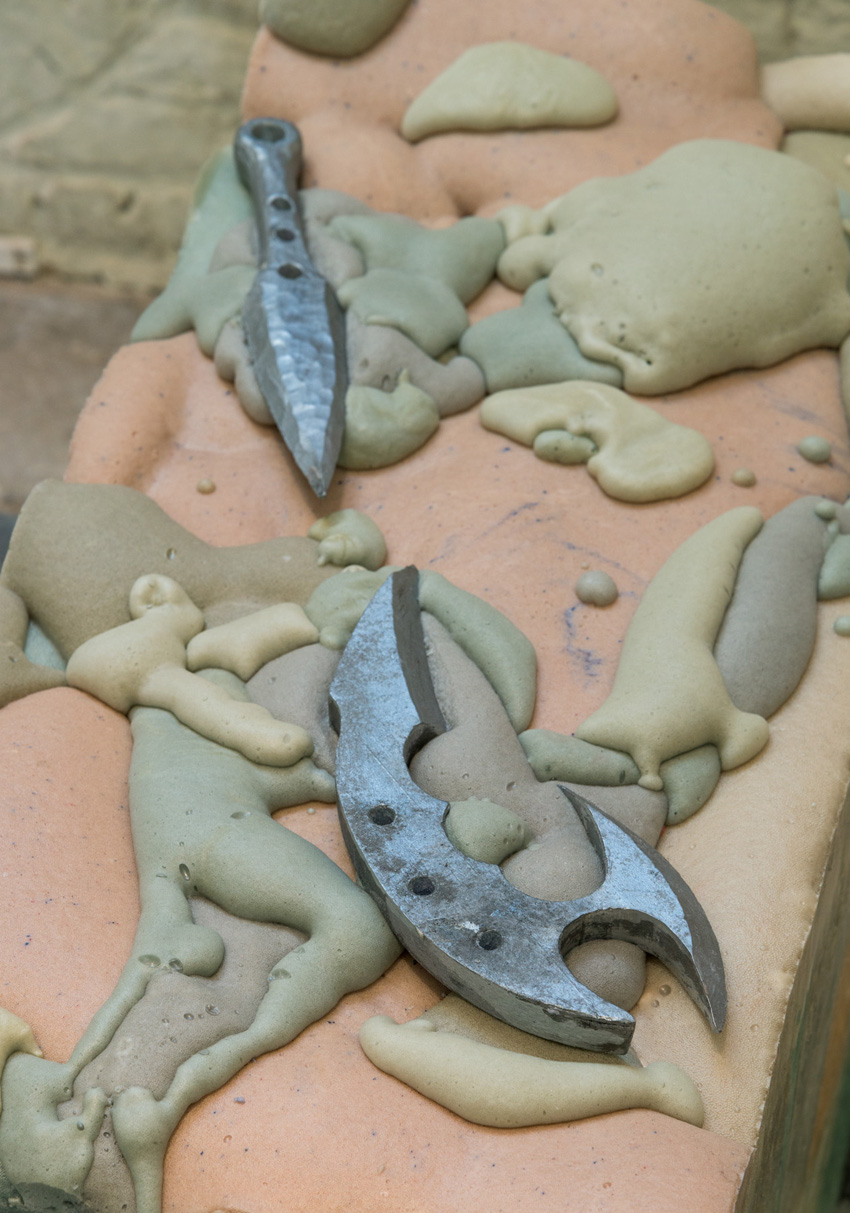 Strata of the Slow, Buried Trench

Courtesy of the artist and Vleeshal, Middelburg