Through 15 January London-based French artist Marguerite Humeau is showing FOXP2 at Nottingham Contemporary. This exhibition is a partnership between Nottingham Contemporary and the Palais de Tokyo in Paris, where it opened in June 2016. Hovering somewhere between research and speculative fiction, Humeau has constructed what she calls a biological showroom, telling stories about the origins of life and language, the development of consciousness and our possible future.

Because this is such an interesting project, rather then just sharing the exhibition, we also wanted to offer some additional in-depth information about FOXP2. What better way to do so then through an explanatory text on the project published on her own website.

FOXP2
Proposal for Reenacting the Origin of Sentient Life

Marguerite Humeau, who became the heroine of a quasi-mystic epic journey, set herself the impossible challenge to artificially reenact the origin of conscious life. The task is immense. Consciousness, also defined as sentience, awareness, or subjectivity, is the state or quality of being aware of an external object or something within oneself. It is the ability to experience, to feel, to perceive subjectively, to have a sense of selfhood.
For centuries, humans have struggled to understand its nature. Many questions are still unresolved. Can it be ever explained mechanistically? Does non-human sentience exist? If so, how can it be recognised? How does it relate to language? What are the triggering events that allow a being to become sentient?

How is it possible that with only 2% difference between humans and chimpanzees, there is a huge difference in the way we evolved? According to a hypothesis posited by Jared Diamond in The Third Chimpanzee, this difference lies in the mutation of a gene called FOXP2, responsible for the evolution of the vocal tract. The project FOXP2 is named for this gene whose mutation, around 100000 years ago, enabled the arrival of articulate language at the source of our humanity. Noam Chomsky has called this event a “single-chance mutation”. It could be seen as an accident of evolution.

A dark corridor leads to the biological showroom. In this corridor, a celestial chorus composed of all humans who have been living on planet Earth since the first tribes 100 000 years ago: 108 billion Homo Sapiens voices, is reenacting the origin of language. Marguerite Humeau has been speculating with linguists around the world to reenact the tilting point when a single chance mutation in a gene called FOXP2 generated a drastic change in larynx structure – allowing our ancestors to produce the first forms of an articulated language. Reverse engineering processes have been used to create this piece and a speculated Proto-Language was created in collaboration with Pierre Lanchantin from the Laboratory of Voice Synthesis at the University of Cambridge. Human languages have been dissected and tracked down to their ultimate origins – with the double goal to understand when the birth of human consciousness actually occurred; and to artificially inject these processes into other non-human artificial species – such as the elephants on display.
As human beings, the only reference point we have is ourselves; however, paradoxically it is still mysterious how human language really occurred and how the first Proto Language sounded like.
The choir sings in a loop, evolving and vanishing, and in sudden bursts of lucidity awakes again to evolve again.

Humeau asked zoologists: what if FOXP2 would have never mutated, what if humanity would have never evolved and become dominant on Earth, which species could have developed? Multiple discussions led her to think that elephants could have become the dominant species on Earth.
Moreover, elephants seem to have already developed a consciousness of themselves, of death, of their own finitude.
“Elephant researcher Martin Meredith recalls in his book an occurrence of a typical elephant death ritual as witnessed by Anthony Hall-Martin, a South African biologist who had studied elephants in Addo, South Africa, for over eight years. The entire family of a dead matriarch, including her young calf, were all gently touching her body with their trunks, trying to lift her. The elephant herd were all rumbling loudly. The calf was observed to be weeping and made sounds that sounded like a scream, but then the entire herd fell incredibly silent. They then began to throw leaves and dirt over the body and broke off tree branches to cover her. They spent the next two days quietly standing over her body. They sometimes had to leave to get water or food, but they would always return.” (Meredith, Martin (2004). Elephant Destiny: Biography of an Endangered Species in Africa. Canada: PublicAffairs. pp. 184–186. ISBN 1-58648-233-5.)

The exhibition has been conceived as a biological showroom, suggesting that consciousness has become reproducible on an industrial scale.
Horrific in its brightness, this supernatural organism is carefully orchestrated. It simultaneously borrows the architectural, sound and visual language of opera and of shopping centres, motor shows and other retail spaces.
The showroom displays various prototypes of beings at different stages of sentience. An elephant matriarch agony is at the core of the luminous display. Her slow transition to death will be the triggering point for various beings to evolve.

A matriarch can be witnessed in her final moments before death.
This artificially engineered death will be the trigger for the birth of sentience in this elephant herd. An elephant death wake is taking place around her.
For more than a year, Marguerite Humeau has been discussing with various experts including zoologists, palaeontologists, biologists, explorers, elephant specialists, psychologists. She asked them to speculate on what could potentially be the physical and biological evolutions of elephants in a world where elephants and not humans would have evolved as a sentient species. There are mourners crying artificial tears, while others have been engineered to be melancholic, drunk, nostalgic, or deeply happy. Two elephants have been designed to fall in love with each other. One individual is watching the scene with a sense of wonder.

The liquid voices extend to the floor in a monumental carpet, which threads have been dyed with pigments concocted with the chemical components of a human body. At times, the carpet has been poisoned with a pourpre deadly pigment concocted with Datura, thought to be the forbidden fruit described in the Book of Genesis. Humanity is reduced to a liquid state, to a primordial soup. This unconscious body, a “body without soul” amplifies the historical dissection between body and mind and becomes the ground for the evolution of sentient beings.

QUESTIONS
Humeau has tried to take into account the infinite and complex forces that are at stake in the evolution of sentient species. What are the triggers and the tilting points? What is the role of randomness and how to reproduce it? Can consciousness and emotions be reduced to their biological origins? Is it actually possible to engineer sentience?
There is a rigour and dedication in trying to create a complete, exhaustive experiment, however impossible that might be. 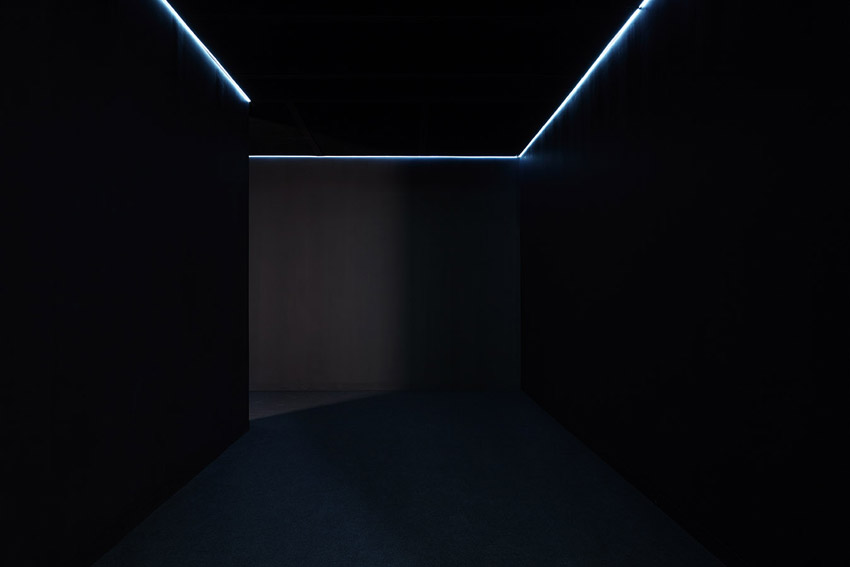 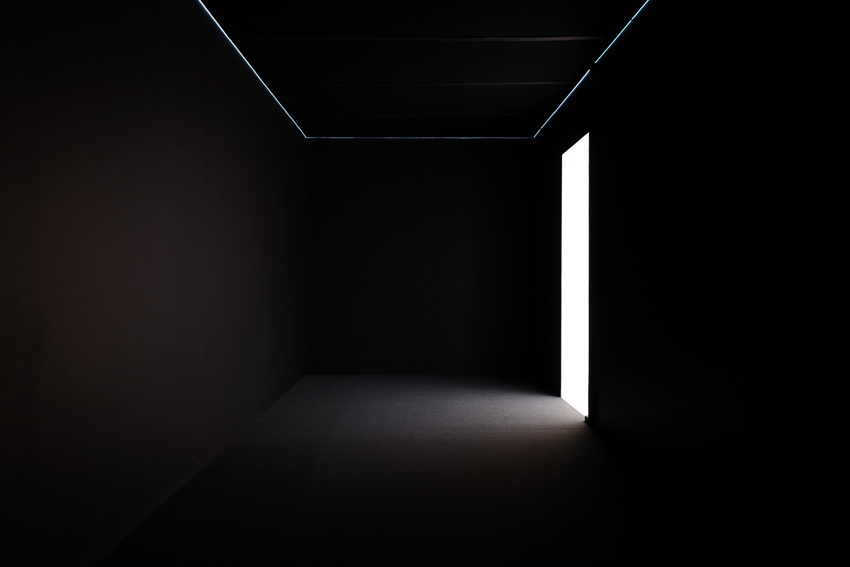 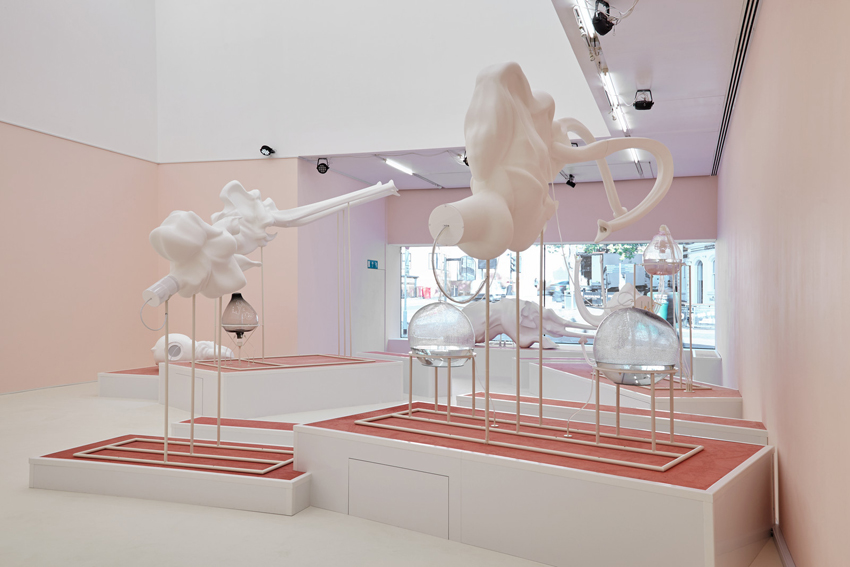 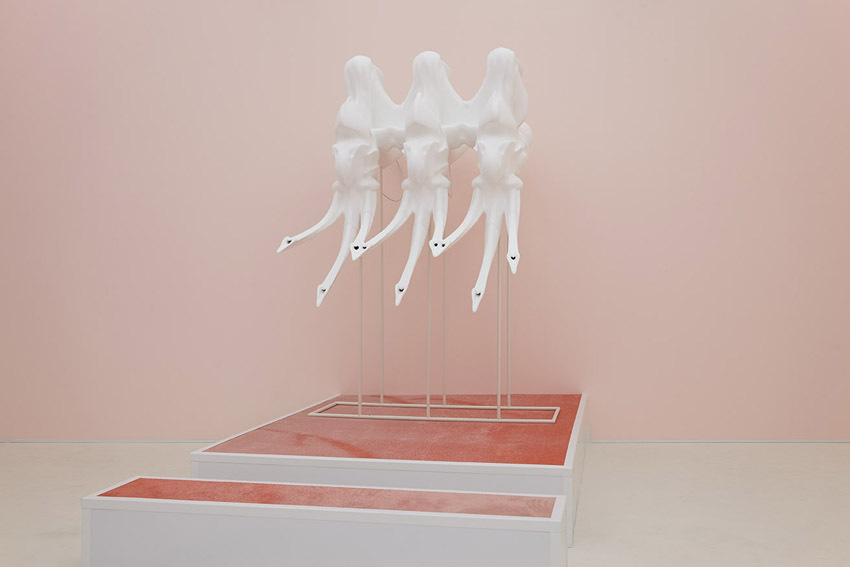 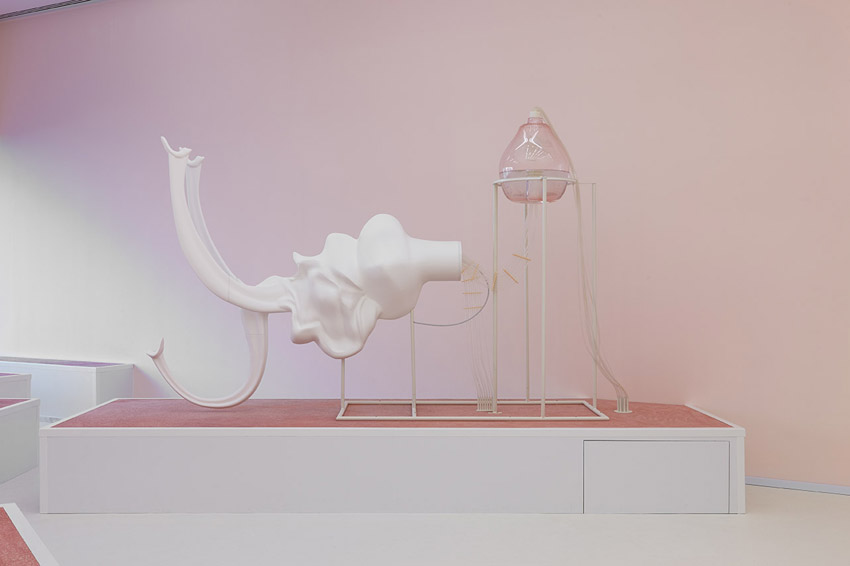 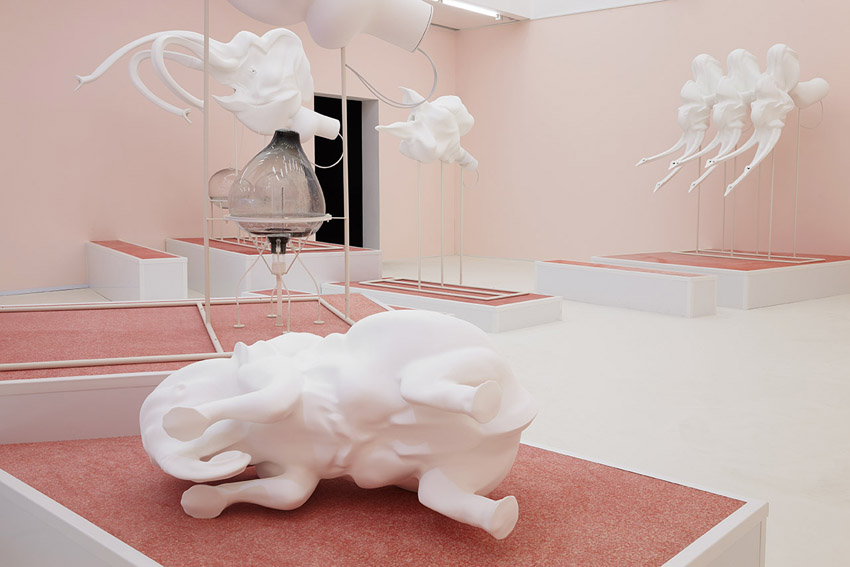 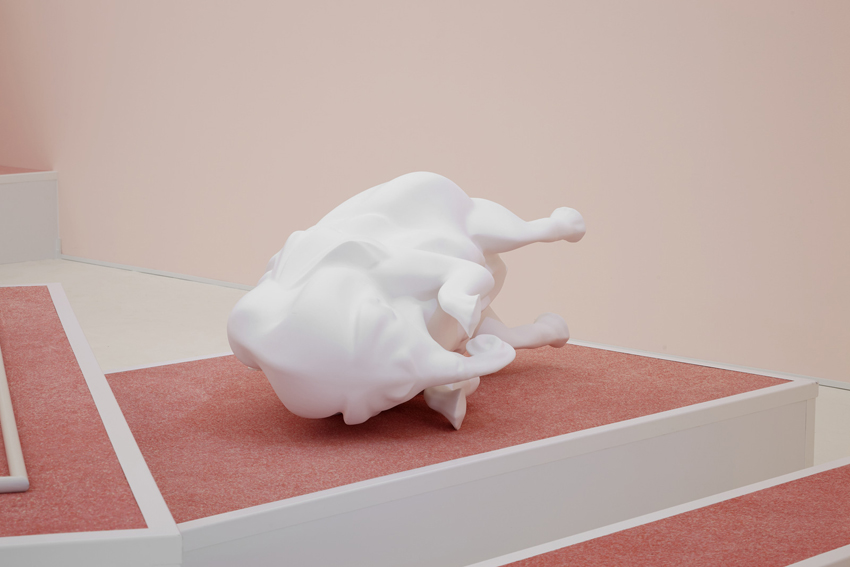 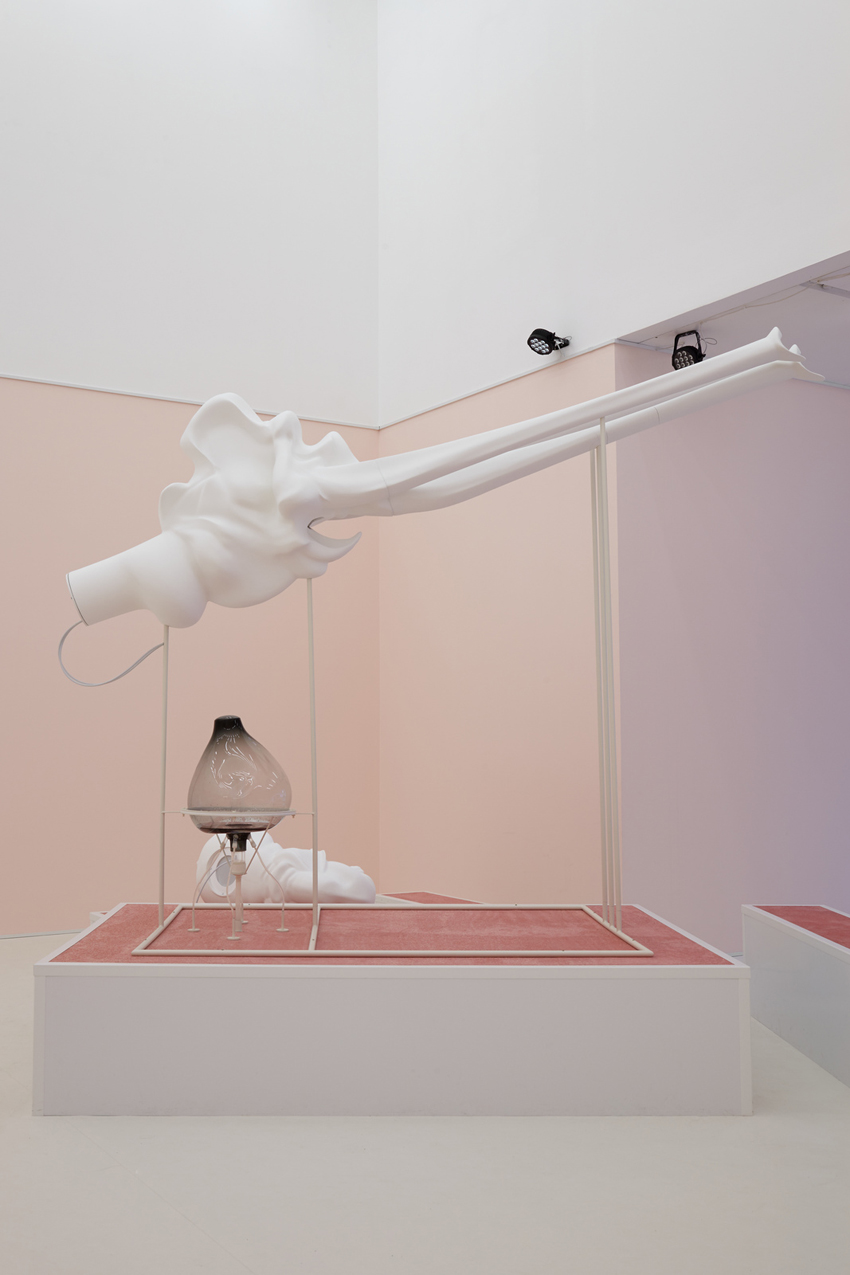 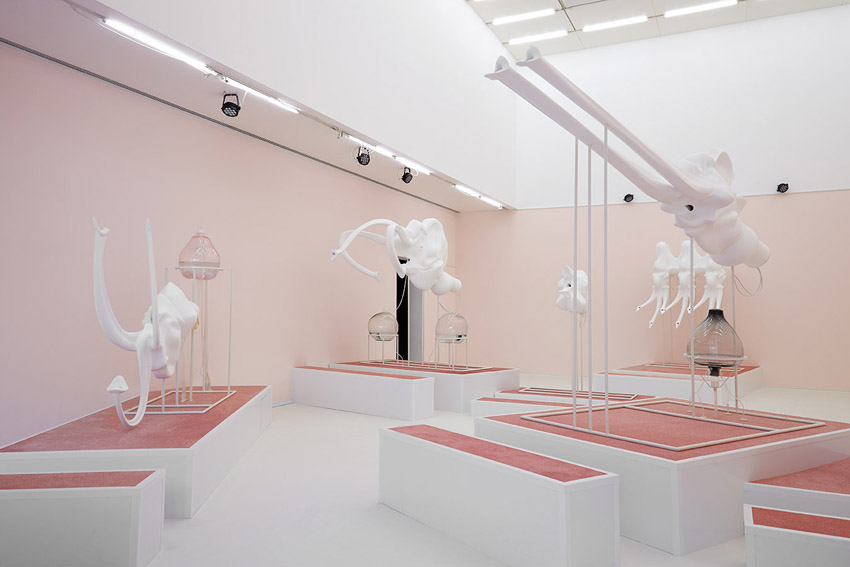 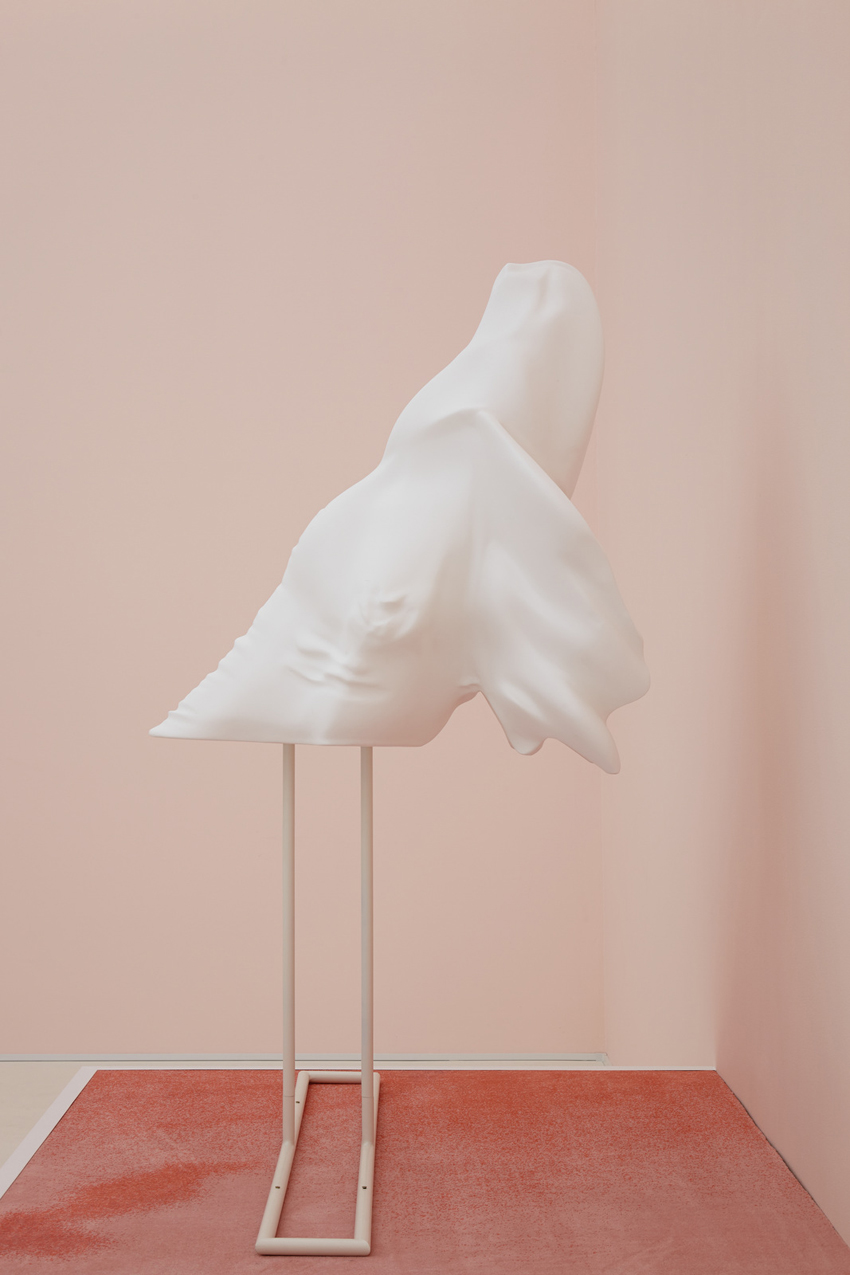 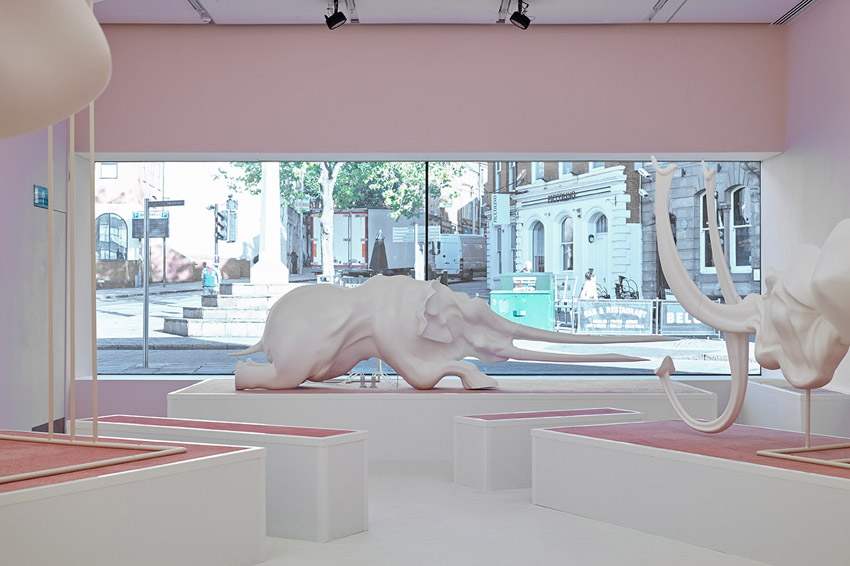 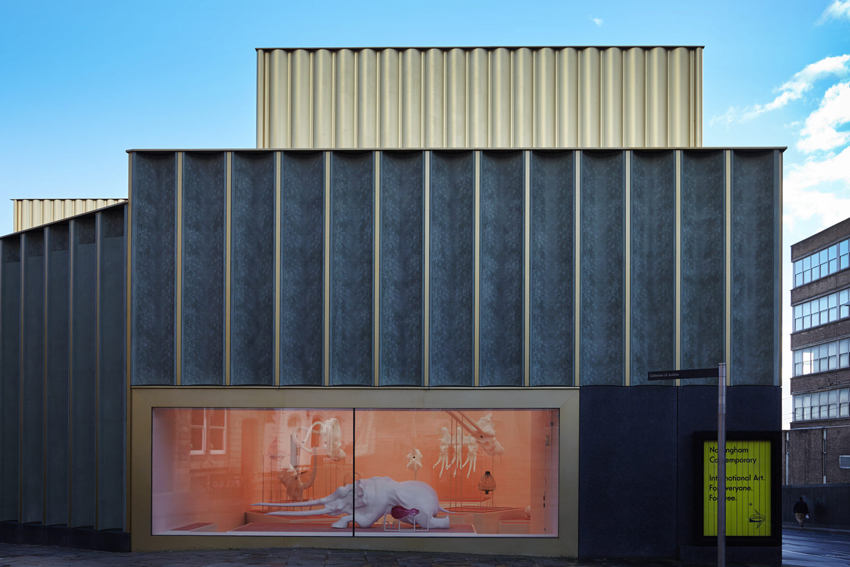