Korakrit Arunanondchai:
Letters to Chantri # 1 | The lady at the door / The Gift That keeps on giving (feat. Boychild) at S.M.A.K., Ghent 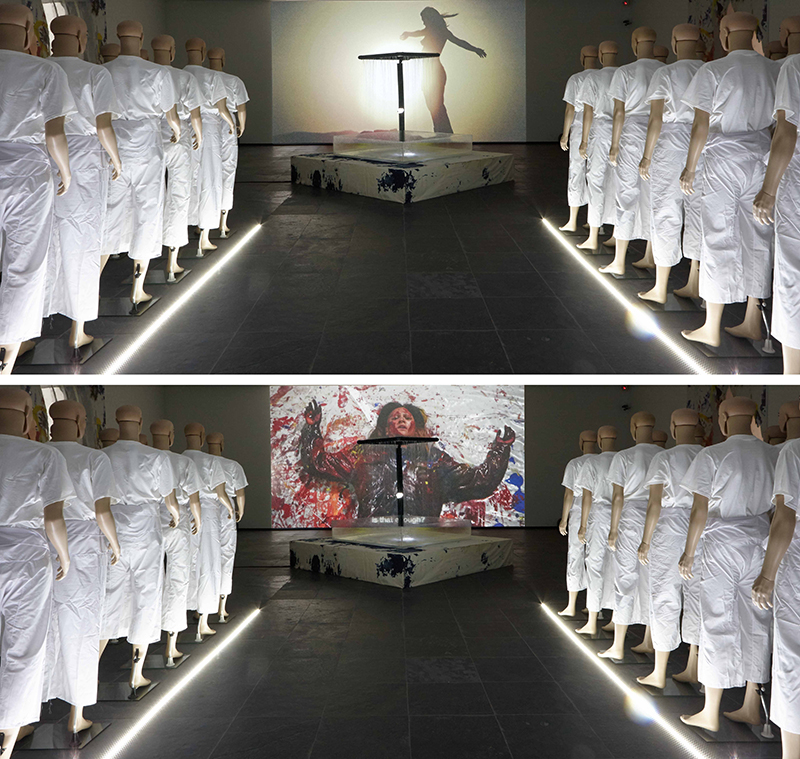 New York-based artist Korakrit Arunanondchai (° 1986, Thailand) developed an astonishing fast-paced career after his graduation in 2012.  Only four years later, the young artist already has solo shows at MoMA PS1, Palais de Tokyo and Ullens Center for Contemporary Art in Beijing on his record. Soon his work will be on view at the Berlin Biennial, but currently one of his installations is exhibited at S.M.A.K. in Ghent. An external group of art patrons and gallerists donated Letters to Chantri # 1 | The lady at the door / The Gift That keeps on giving (feat. Boychild) for the museum’s collection.

Upon entering the exhibition space, a guiding video takes you on a digital journey. It introduces the Dhammakaya Temple, which is located in Thailand, slightly north of Bangkok. This Buddhist temple caused a controversy when it proclaimed that Apple guru Steve Jobs was reincarnated as a celestial warrior-philosopher of the Dhammakaya-community. Nevertheless, the temple attracts thousands of followers worldwide, and is currently one of the fastest growing Buddhist temples of all time. Their political tactics resemble those of the successful Church of Scientology and they emphasize the inevitable connection between inner peace and technology. In other words, they repackage Buddhism for digital folks.

In Letters to Chantri # 1, Korakrit Arunanondchai wonders what it would be like if Dhammakaya Temple commissioned him to collaborate on an artistic project. Following through on this idea, the artist designs a concept store for soap. For this installation Arunanondchai appropriates the identity and features of the Dhammakaya Temple. According to the artist, this atmosphere reflects a kind of superficial empathy that is generated by gifts of soap. If you’re clean on the outside, you’re clean on the inside.

In a video letter addressed to Chantri, he addresses a fictional character who performs as a stand-in for both audience and artist. This androgynous figure is neither an alter ego nor an avatar, but rather an allegory of what perceptions of groups might be. Our perceptions of Chantri are thus filtered through data such as texts, images, sound, and rumors. Arunanondchai explains that this work addresses the idea of Foucault’s author function that is rooted in the premise that viewers author their own readings. Following this thought, the artist brings up some recurrent elements like bleached denim and fire that inspire one’s imagination. The elements feed the myth.

The work is generally featured by many art historical references, such as abstract expressionism or Yves Klein’s’ Anthropometries and highly influenced by avant-garde filmmakers such as Chris Marker. Although the omnipresence of these western indications, the artist is much concerned about the universal readability of the work. Again this re-enacts the politics of religious scopes, attempting to gain a universal crowd of believers. According to Arunanondchai his work cannot be perceived as a critique to these spiritual movements, but the purifying video installation treatment does arouse certain skeptic voices on this matter.

Images courtesy of the artist and S.M.A.K., Ghent