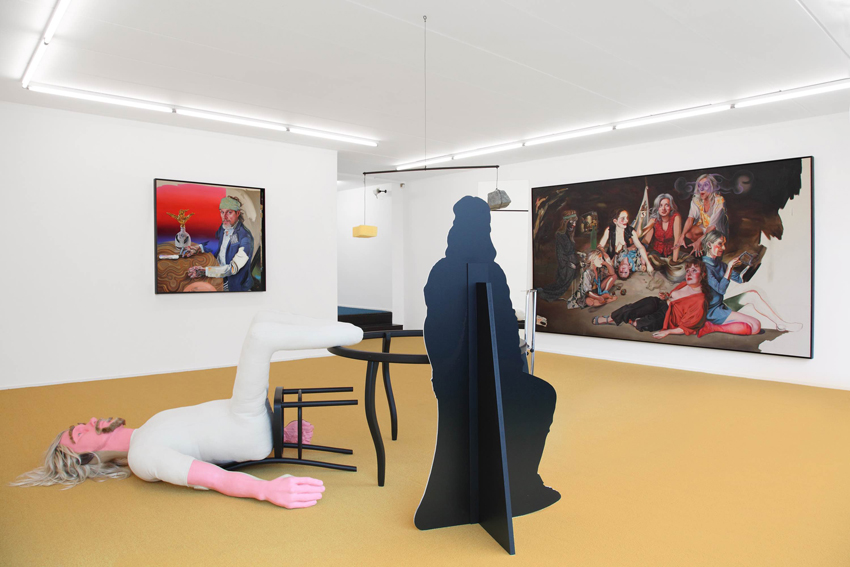 If painting is a language Kati Heck speaks it in all dialects. The 20th century saw painting analyzed and deconstructed until we declared it dead. In her intuitive manner, Heck revives painting into a new form, creating a universe that captivates us.

Don’t let her fool you. At nine months pregnant Kati Heck may appear to be lounging with a cat on her lap, but, as always, she is patiently plotting the moment women, for the benefit of the world, take it over. She is the motherly embodiment of nature vs. nurture. She’ll roast you a chicken, invite you for dinner, and sit across from you with that particular smile of hers examining the way your teeth come together while you chew. She will join you while you drink yourself under the table and then hold a magnifying glass to the dribble coming off your chin. Heck keeps us on our toes. Her paintings, like her presence, hold us accountable for existing. Her work can be as playful as it is brutal, beautiful as it is grotesque, often at the same time.

Makeal Flammini: Did you make a sculpture of Brad Pitt because of his recent divorce?

Kati Heck: No, just bad timing. As teenagers my friend and I would have dinner parties while my parents were away and prepare the German dish knodel. This was the 90’s and I was in love with Brad. I would set a place for him at the table that included a cut out of him that joined us. For the exhibition I thought I’d like to recreate this dinner, but more as a gathering, with myself as the cut out figure. First, the idea was to do it with Mahler, the composer, and then this movie figure that is strong and we see saving the world.

What films does Pitt save the world in? I don’t think of him as a movie hero.

You always see his chest and it gives me a feeling of safety.

I think he typically plays a sort of loser who gets by on cleverness and good looks but ultimately, he is going to let you down.

The anti-hero is also a hero who can save the world. A discussion for the table! The table, though it is absolutely dysfunctional, serves as a platform to discuss what is going on in the world. When you listen to Mahler’s works they sound all a bit tragic, but this one, when you listen correctly, is not about loneliness but more about being so lost inside your own world that you no longer connect to realities outside. I relate to it quite a lot, artistic solitude.

Is there anything on the table?

Nothing but Brad’s feet, not even feet, they end in stumps.

Are the paintings in this exhibition related to this idea of presence and absence?

This sewing knot reoccurs throughout this exhibition and there is a large sculpture of it as well. Can you tell me about it?

Kuschelknot. The knot’s the problem itself, but it’s soft. You can hug it, good to embrace problems rather than fear them. 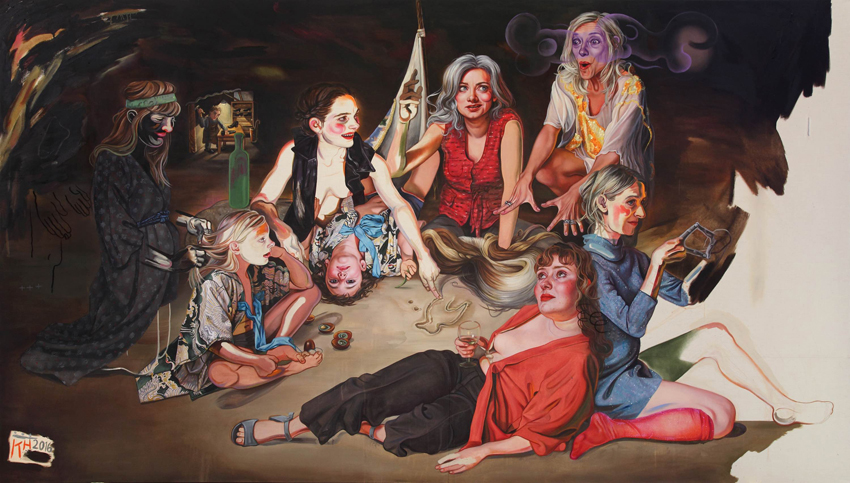 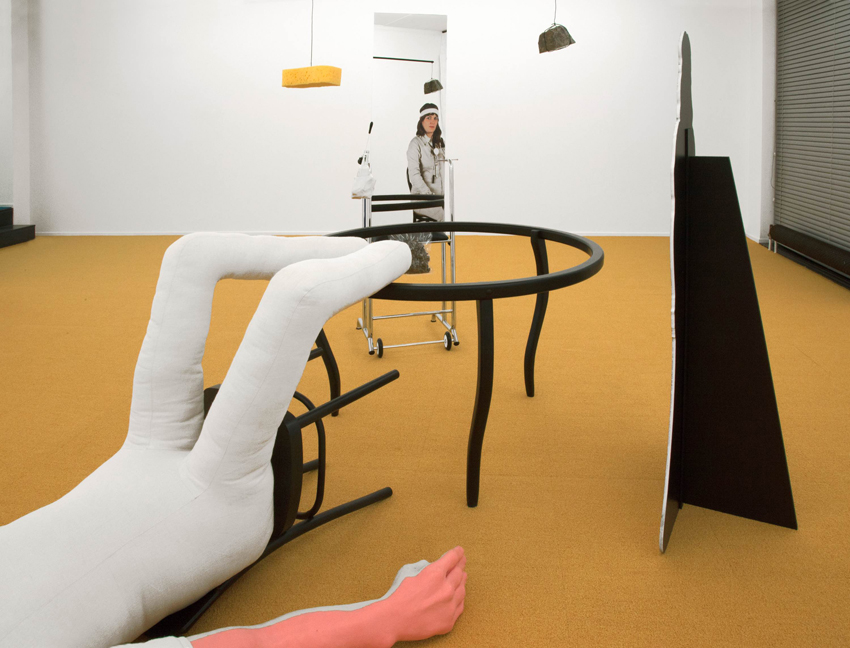 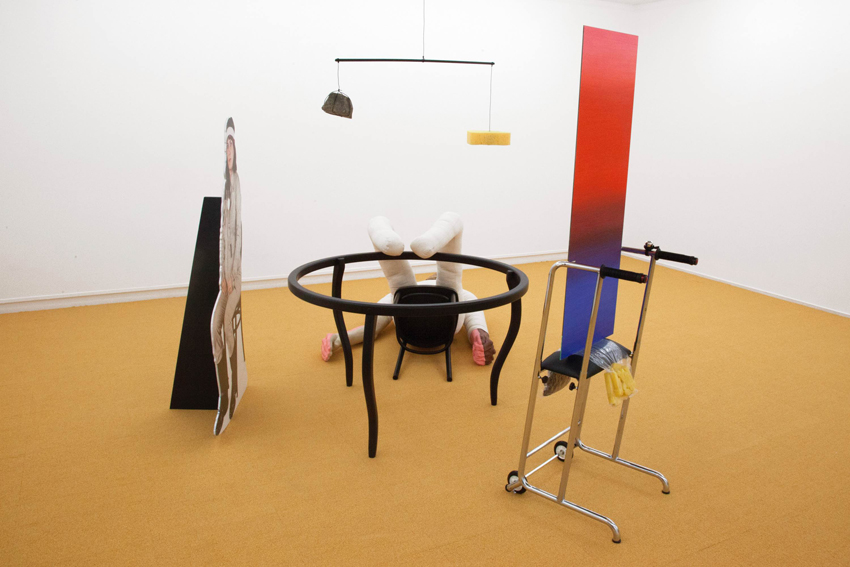 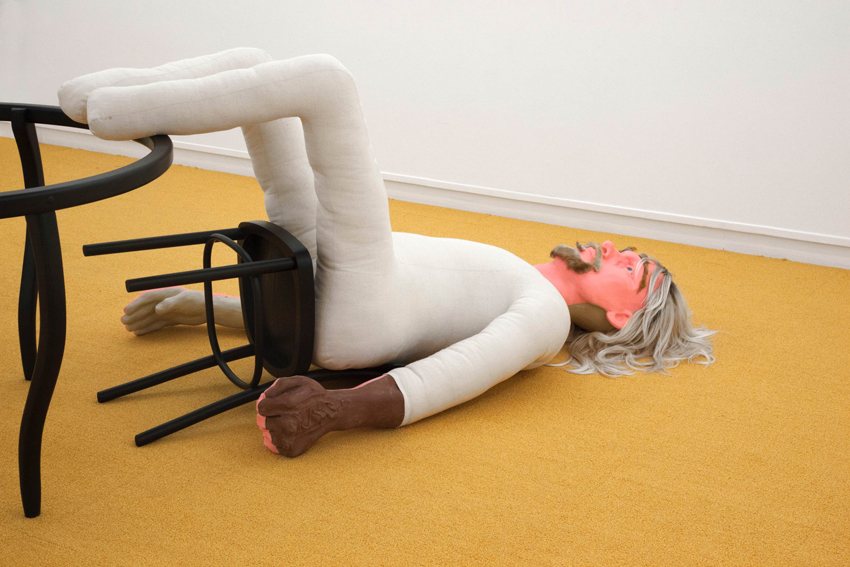 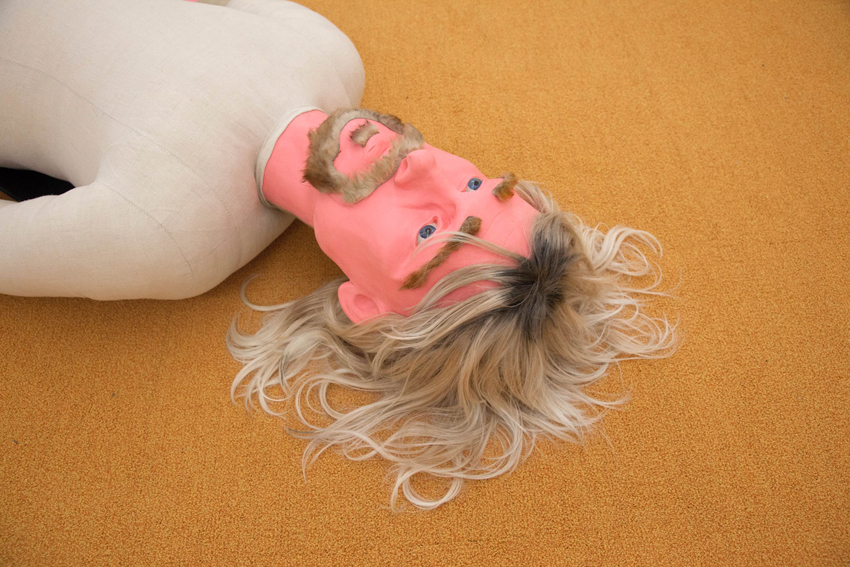 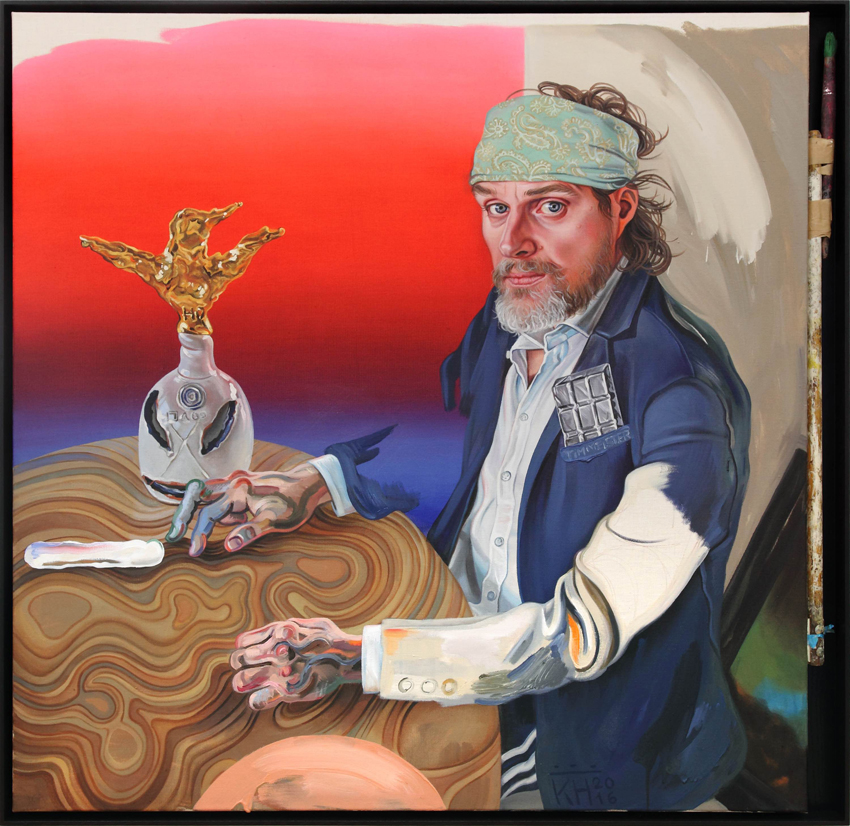 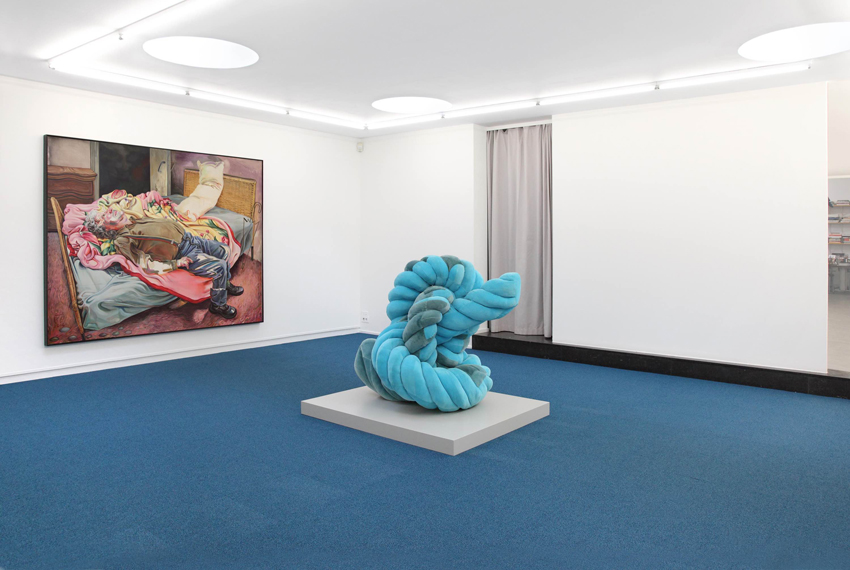 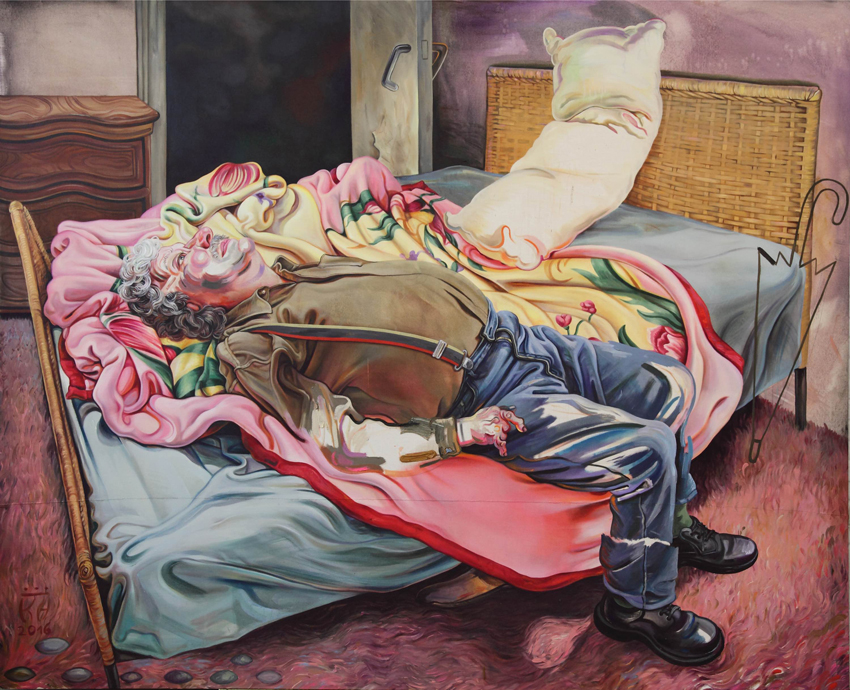 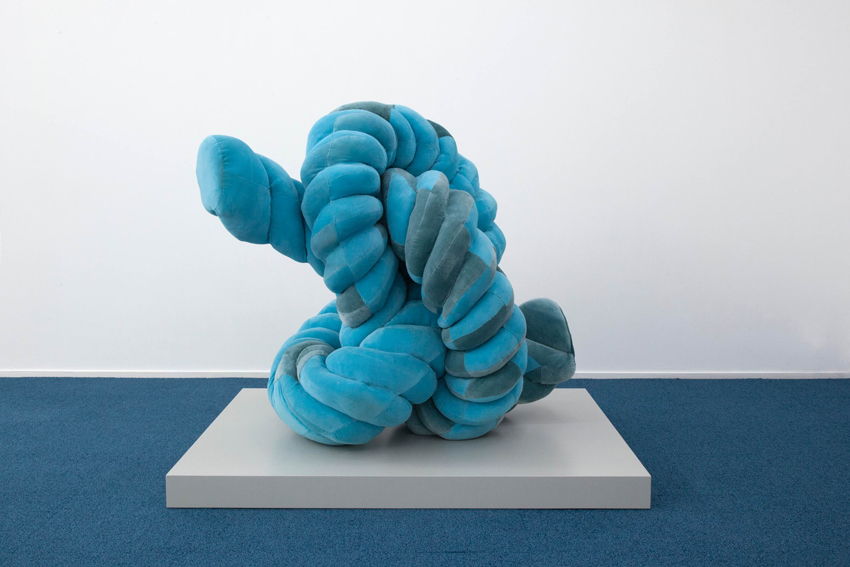 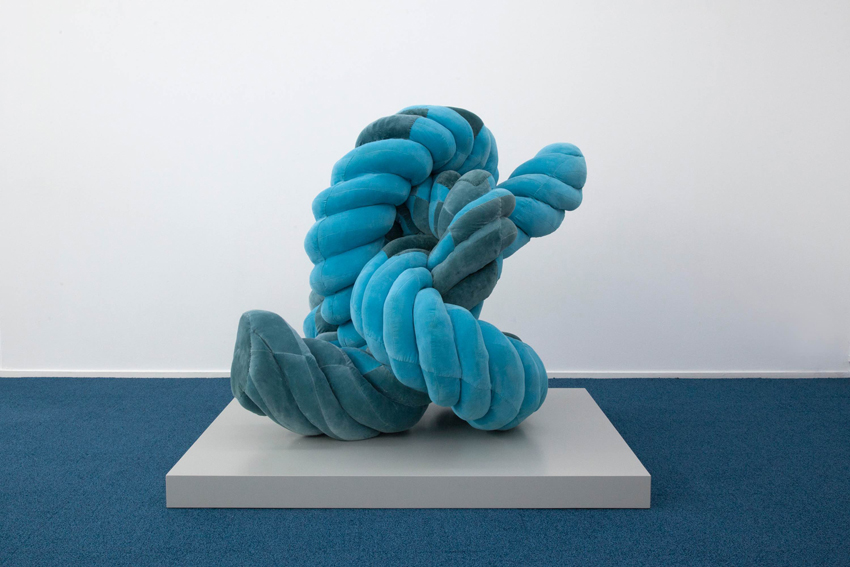 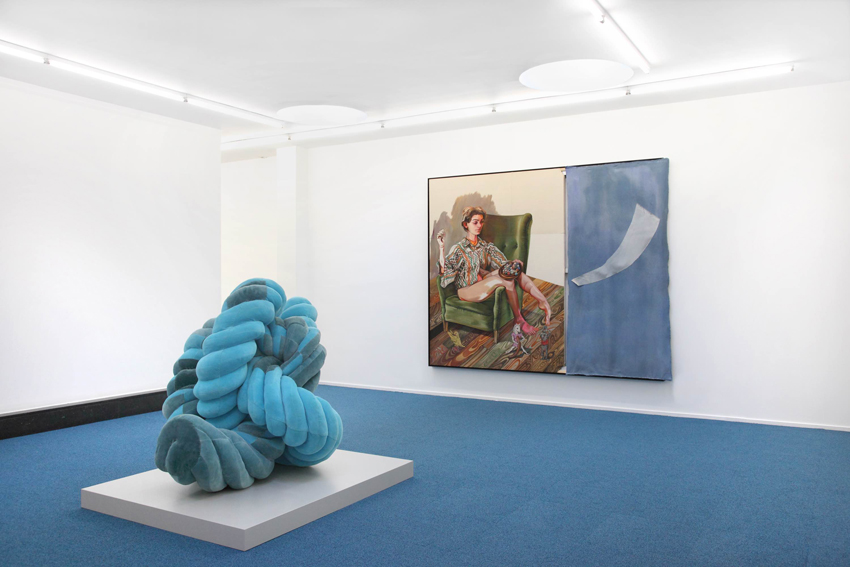 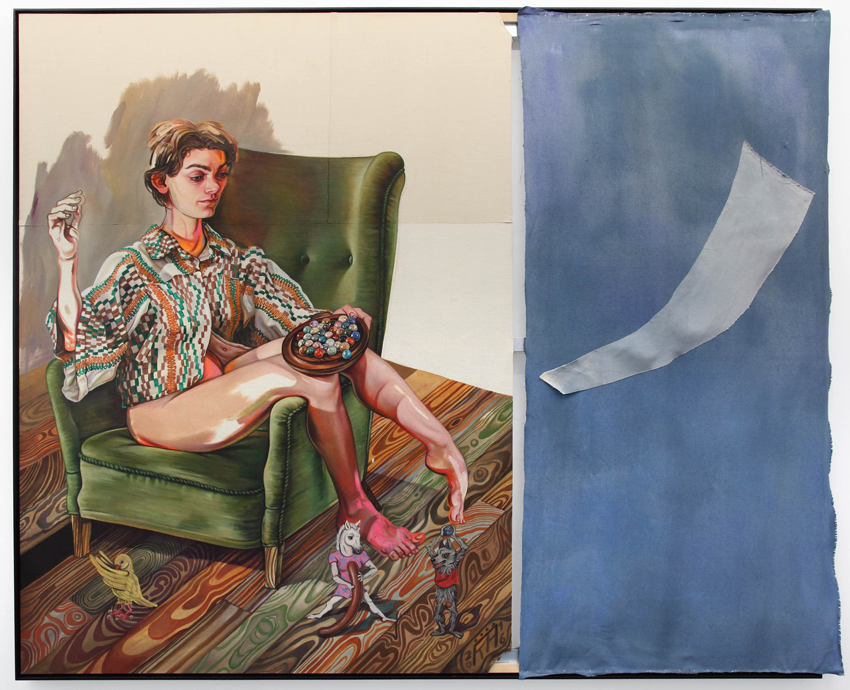 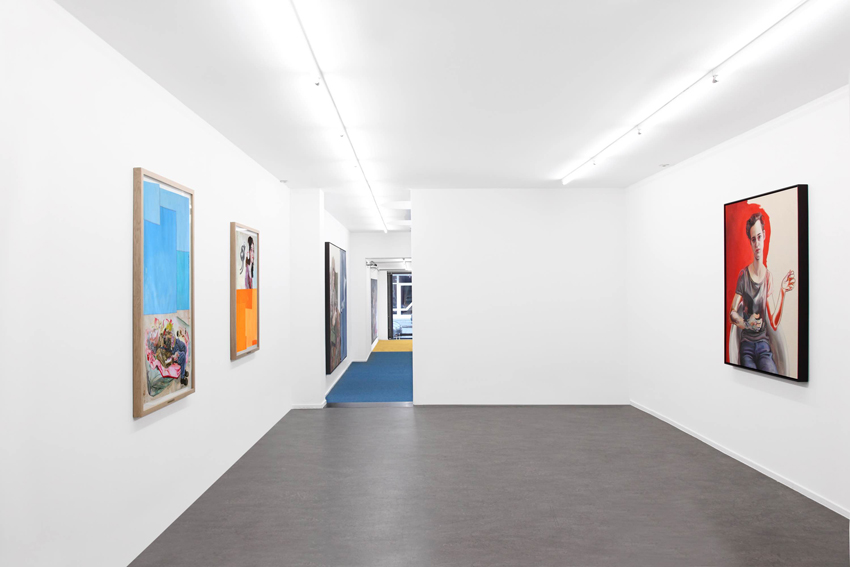 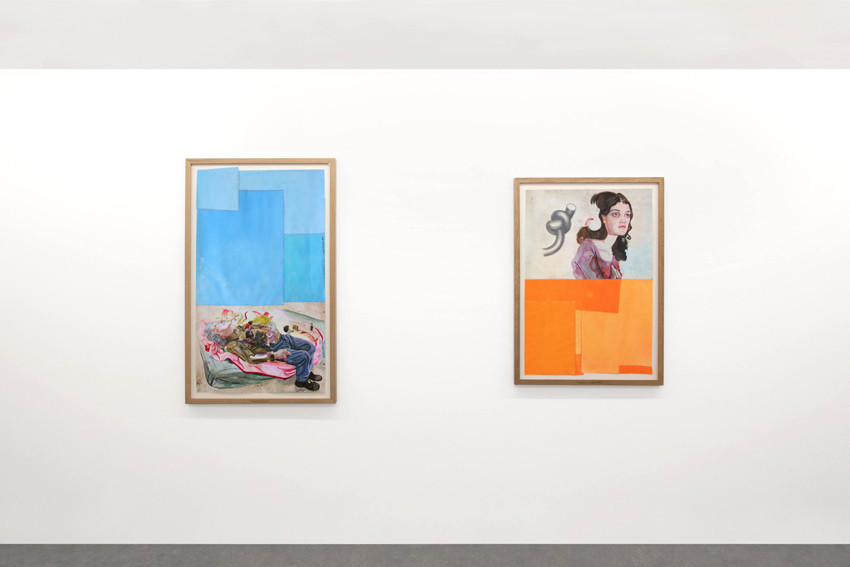 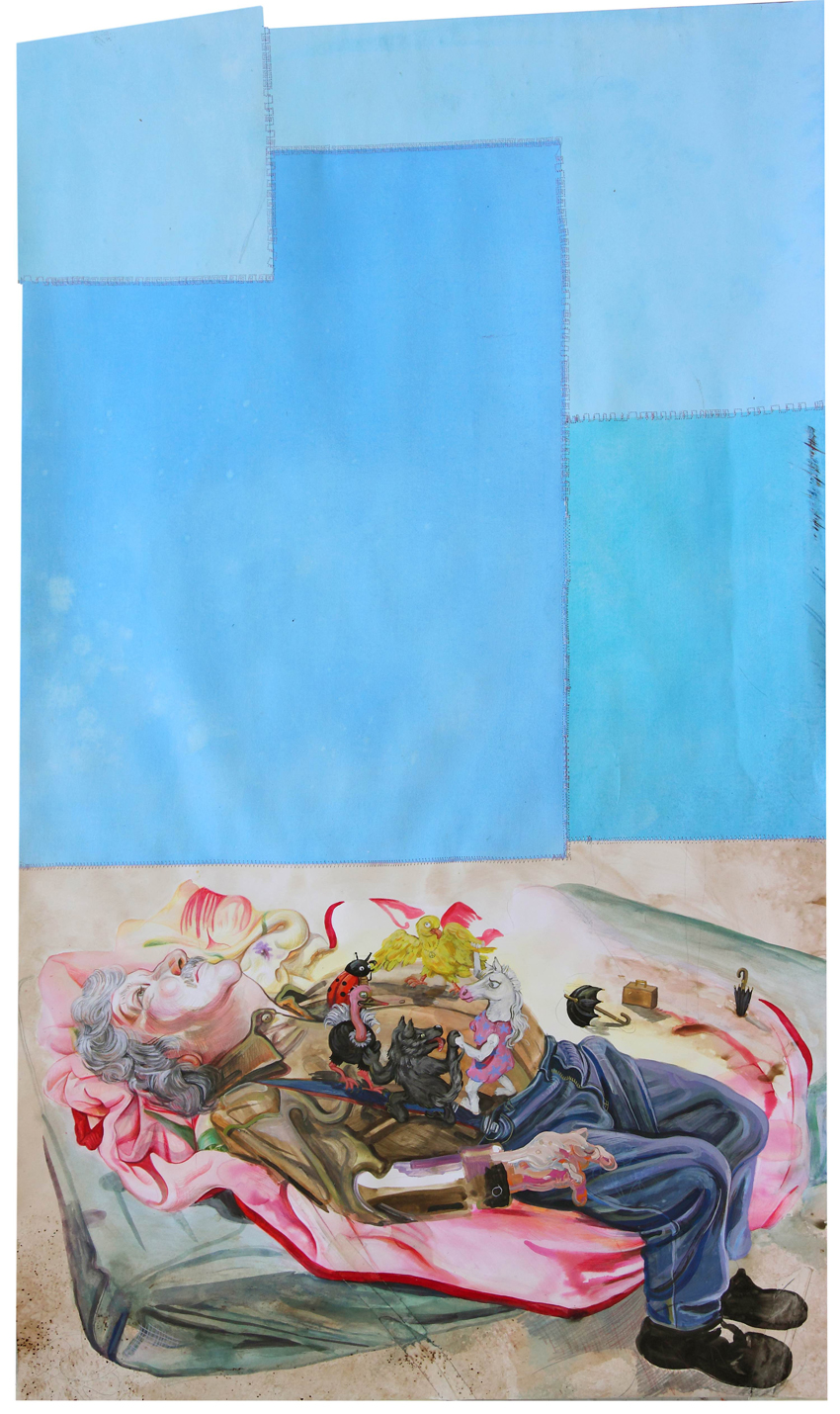 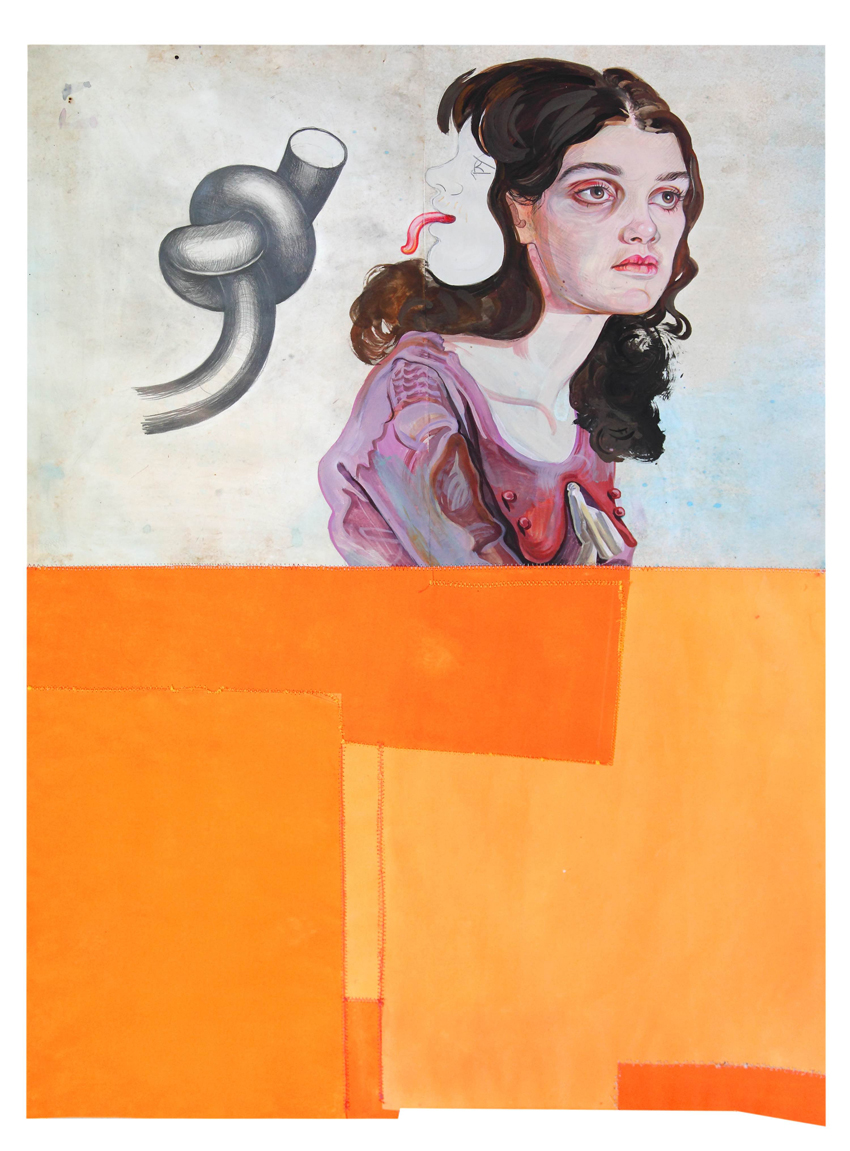 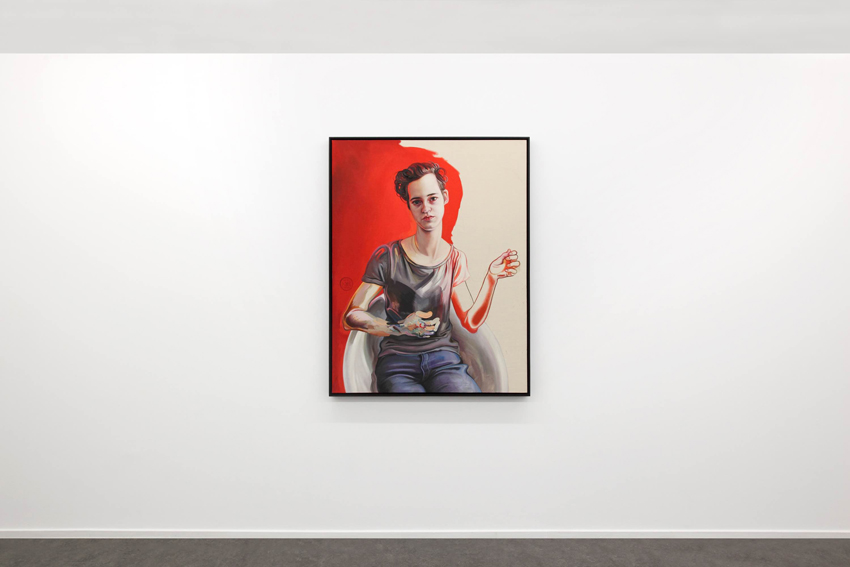 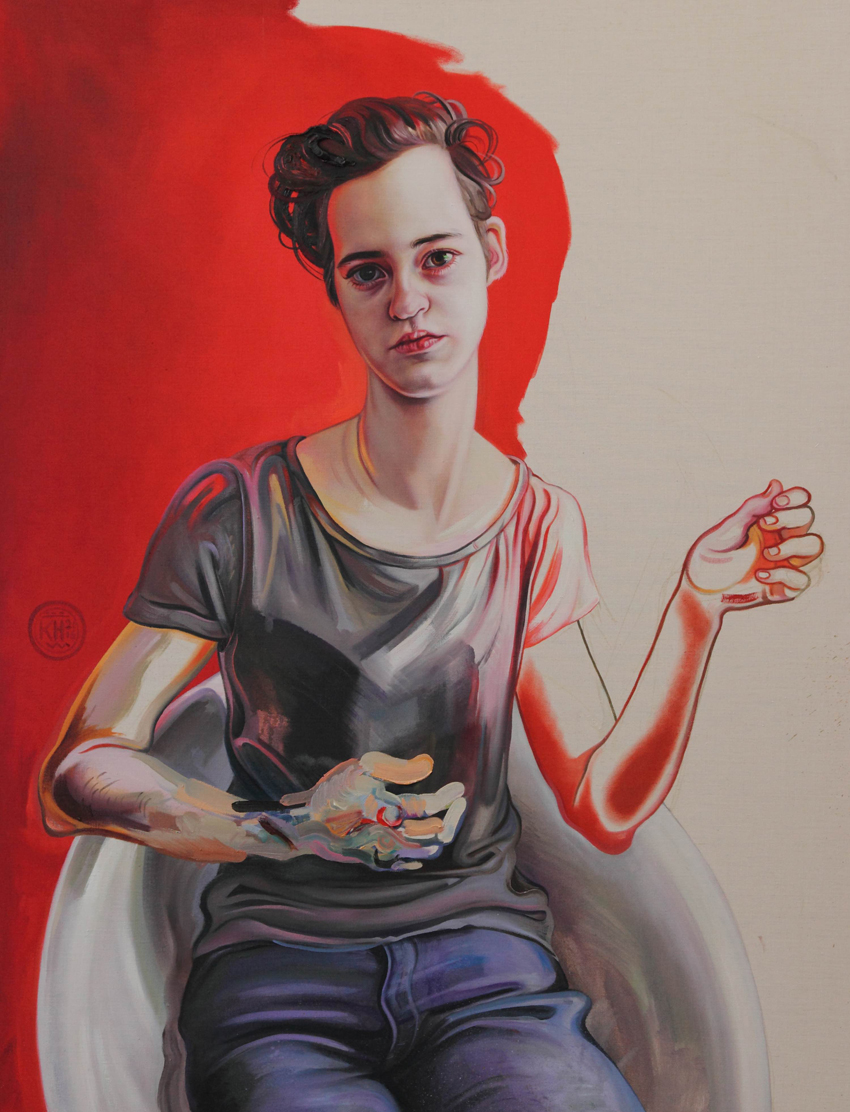 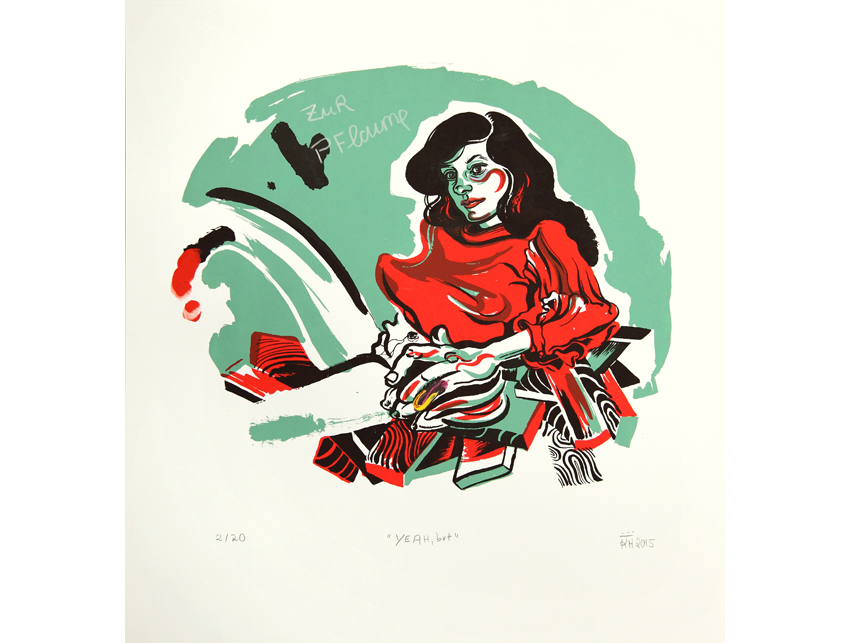