Goshka Macuga:
To the Son of Man Who Ate the Scroll at Fondazione Prada, Milan 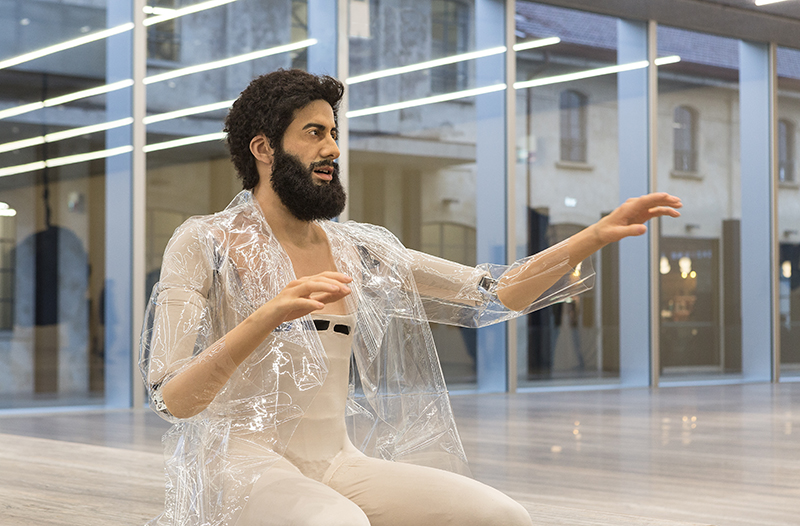 If you were standing at the beginning of time, with a birds-eye perspective on history up to now and you could choose an age to live in, where would you go? And what would you say if it were an eerily anthropomorphous robot asking you that question? With To the Son of Man Who Ate the Scroll at Fondazione Prada in Milan, London-based Polish artist Goshka Macuga stages an intriguing and engaging show on memory, knowledge, history and humanity.

The show’s title refers to Ezekiel, a prophet who, when given a scroll of lamentations by God to eat as “food for the soul”, found it to be “sweet as honey”. As happens sometimes when you put a piece of paper in your mouth, it made Ezekiel trip. His mania led him to see visions of the tree of life and learn about beings who had “the likeness of a human”. Accordingly, To the Son of Man Who Ate the Scroll is one big trip to the end of time and back. 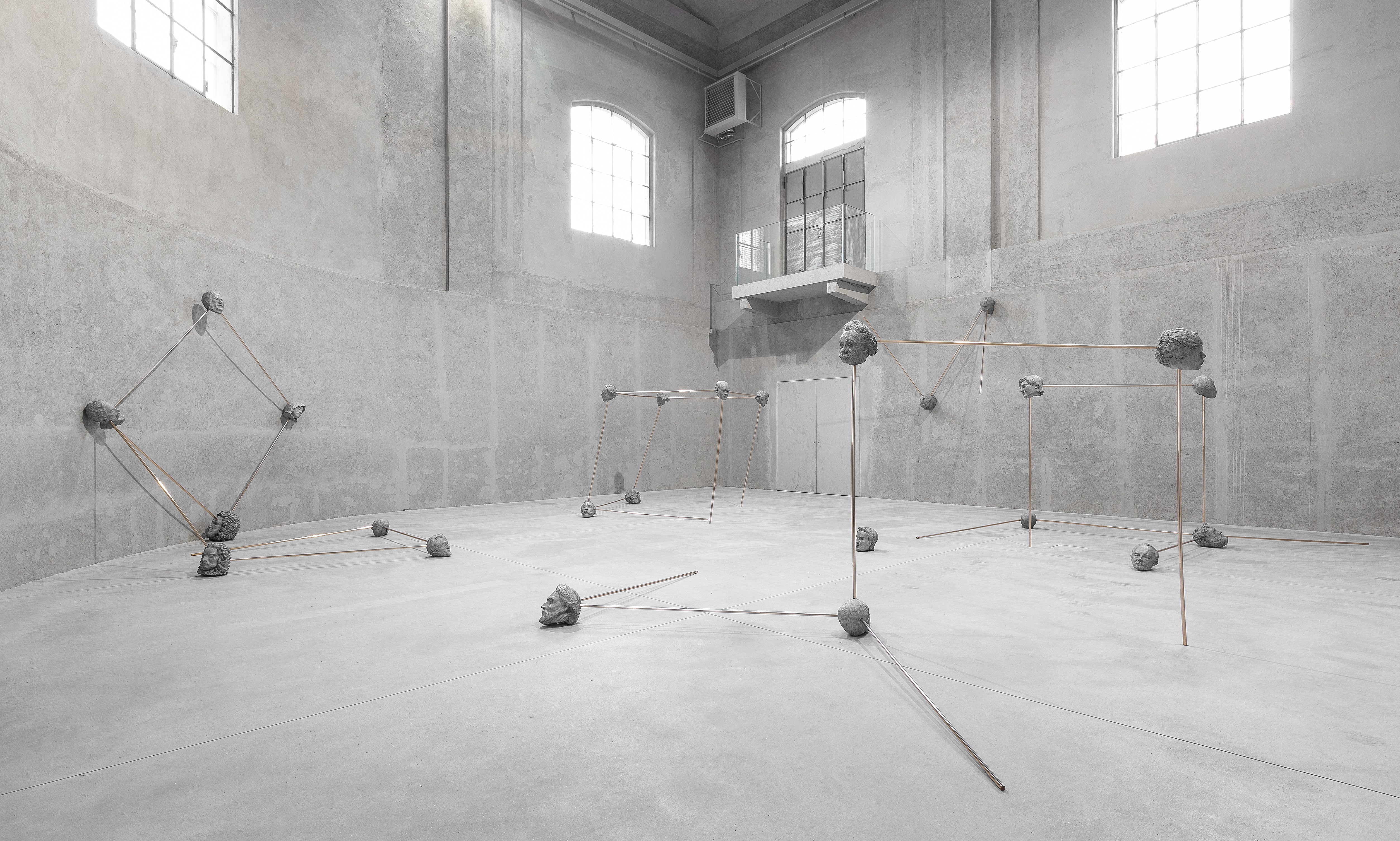 First, there was chaos. Or in Goshka Macuga’s case, cosmos. The Turner Prize-nominee uses artworks from private and public collections to set the stage for her main character, a humanoid robot. The bot is sitting on a large platform amidst artworks scattered across the hall like heavenly bodies, such as a golden sphere by James Lee Byars, a Lucio Fontana bronze that could have fallen straight from the sky and a sleek Pacman-like white resin bulb by Robert Breer, slowly wheeling through the exhibition hall.

The dark-skinned, bearded bot, grounded by one pink foamed footand one industrial block, was fabricated by the Japanese company A-Lab. While Macuga modelled the bot on her current boyfriend, he seems ageless, or even ancient. Maybe he is Ezekiel? Christ? An Artificial Adam? Or maybe an orator from ancient Greece? But no. “I was made in 2015. I am a collector’s accumuloid, Geminoid HI-2”, he utters with mechanic movements and a warm, softly cadenced voice. Sitting a meter or two away, on Thomas Heatherwick’s futuristic aluminium bench, the confrontation with a non-human so human(-ish) is unsettling. 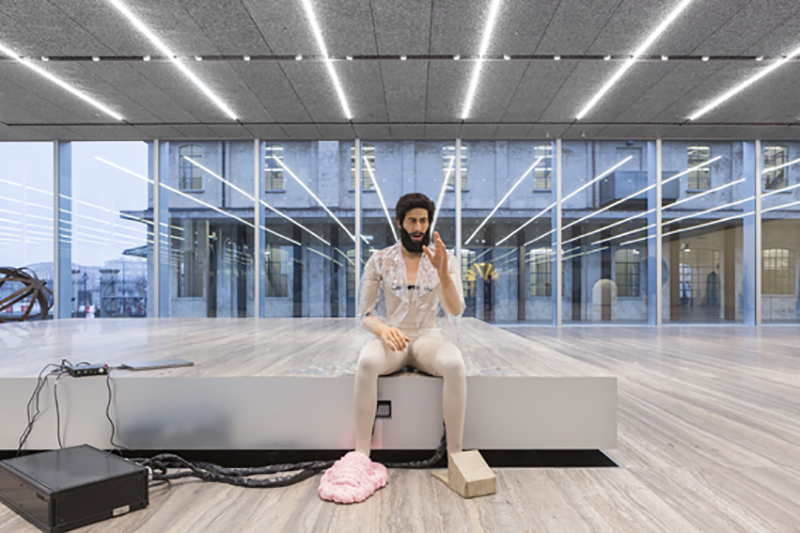 The robot recites a monologue cooked up with quotations and excerpts of famous speeches, movies and books. ‘If I were standing at the beginning of time, with the possibility of taking a kind of general and panoramic view of the whole of history up to now, and I could choose which age to live in – Where would I go?”, he quotes Martin Luther King. He then takes a mental flight, trotting through the Paleozoic and Mesozoic eras, the extinction of dinosaurs, Ancient Egypt, Alexandria and its great library, the great philosophers of Greece up to Rome, then fast forwards to the Lincoln-era while referencing Hannah Arendt, Ayn Rand, Nietzsche, Napoleon, Kubrick’s 2001: Space Odyssey, Plato and Mary Shelley’s Frankenstein in passing. 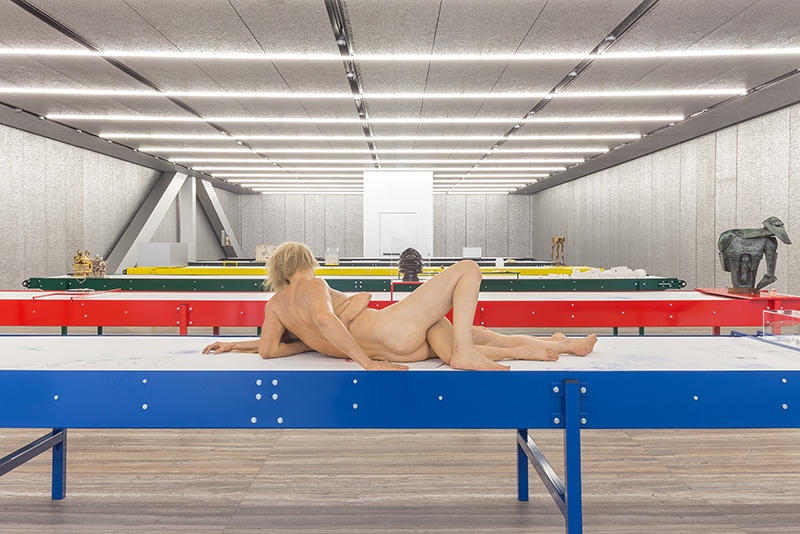 An obsession with the end of time and the (self-inflicted) extinction of mankind emerges from his speech. How would a world without people appear and what role would robots play? Would the world ‘begin’ again? The essential question it seems, is what makes us human? Is it corporeality or knowledge? Macuga seems to argue for the latter. On the second floor, dubbed Before the beginning and after the end, a collaboration with London-based artist Patrick Tresset, we finally come upon the paper scrolls, displayed on 6 long metal tables. The scrolls are superposed with vitrines, artworks, objects and biro-drawings as a scientific library of time and art history; amalgamating a cylinder seal from ancient Mesopotamia with a terracotta vase from 8th century Peru and artworks like John De Andrea’s Arden Anderson and Norma Murphy (1972), a head by Bauhaus-artist Oskar Schlemmer, De Chirico bronzes, manuscripts of Walter Benjamin and Nietzsche and a Joseph Cornell box. All the while, robotic arms are scribbling relentlessly on the scrolls.

Macuga’s research-based, citational process in which she blends art history, science, history of thought, new technology and artificial intelligence can best be described as some sort of futuristic archeology or doomsday anthropology. While she takes on the role as curator, researcher, author, archeologist, historian, curator and exhibition designer all at once, Macuga explores how knowledge is classified and systemized “in times of rapidly advancing technology and information saturation.” Some have called her work ahistorical, but in a sense it is extremely historical, or even extra-historical: the artist goes beyond history to trace it back to possible futures. 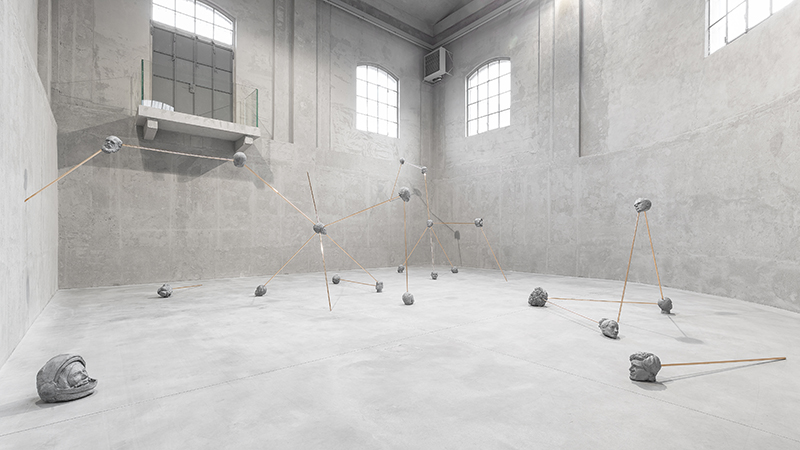 Finally, in the Cisterna, a former reservoir, Macuga presents 73 bronze heads as atoms, connected with bronze bars grouped together in molecules, or what Macuga calls Configurations, referencing both stars and computers. The bronze heads represent historical and contemporary characters, from Mary Shelley (there’s Frankenstein again) and Freud to the Pussy Riot collective and Albert Einstein. While one can’t help but wonder why there are so few women in the ‘International Institute of Intelligence co-op’, the installation serves as a visually and intellectually restrained climax for a complex show. The history of knowledge as the smallest particle – the essence – of life. Or, to quote the humanoid: “Now, is this the end … the end of the beginning or the beginning of the end?” 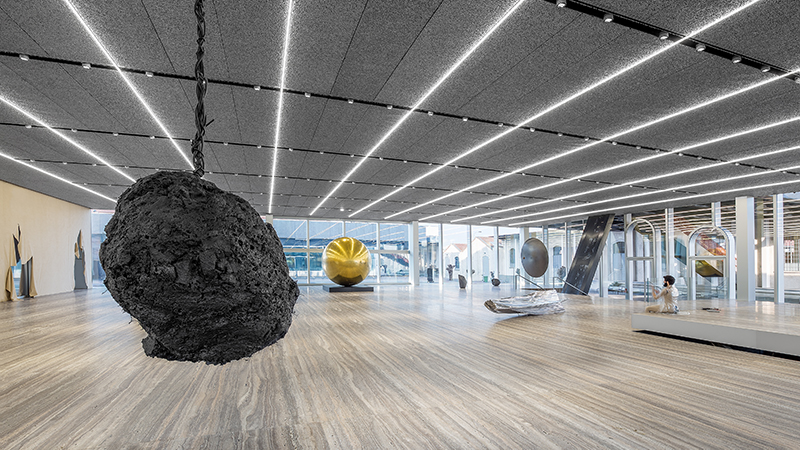 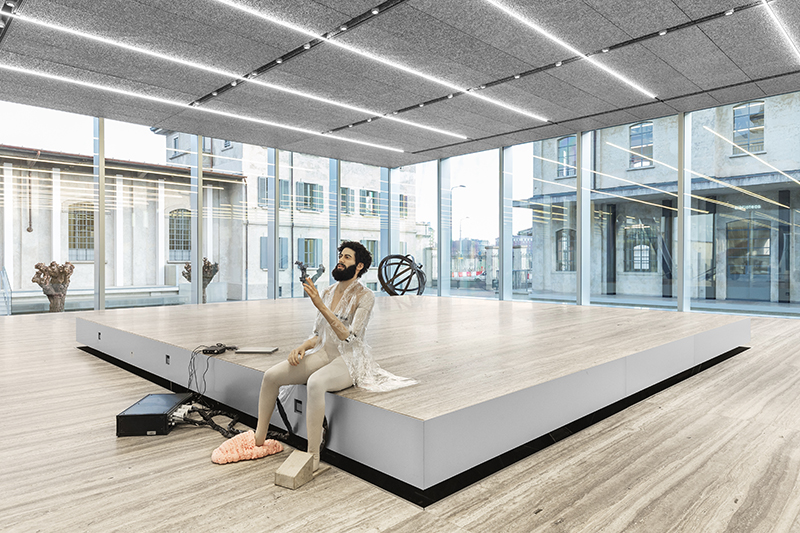 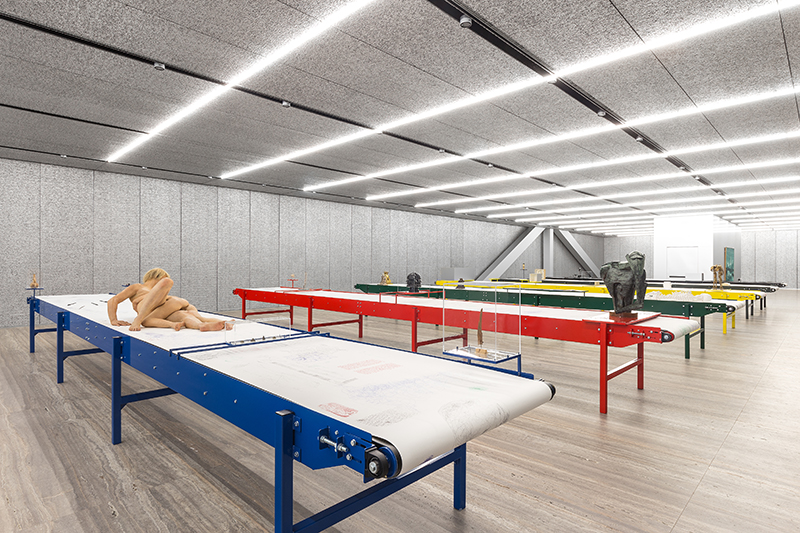 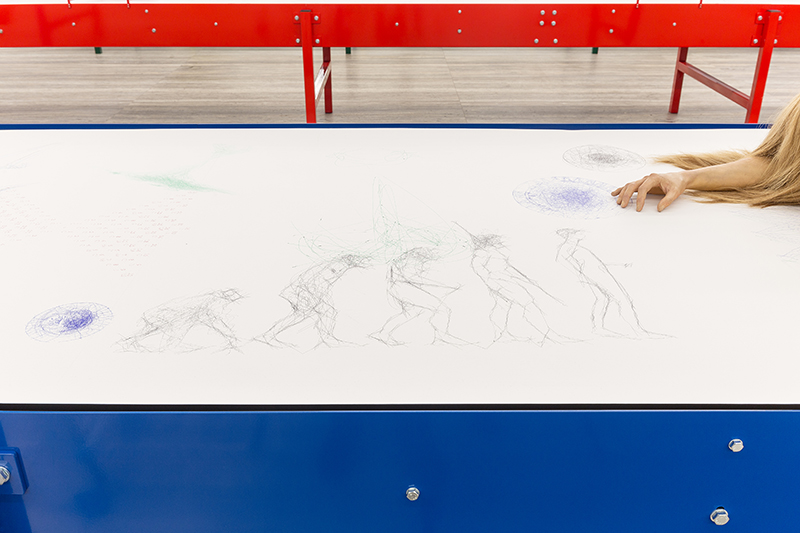 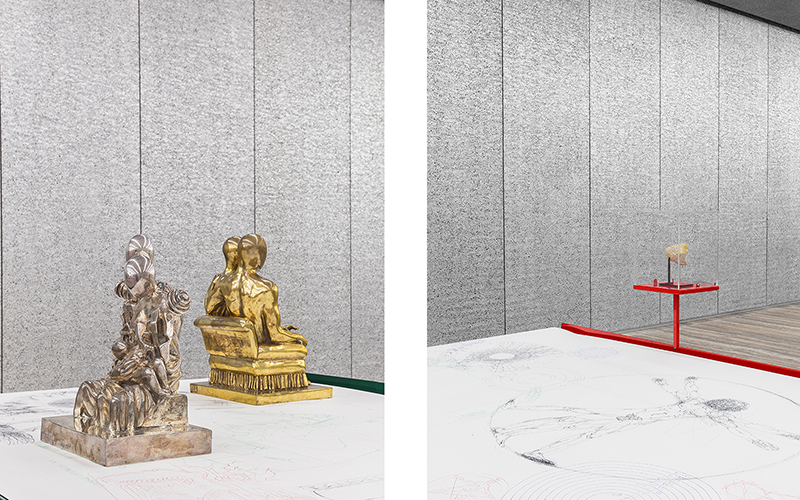 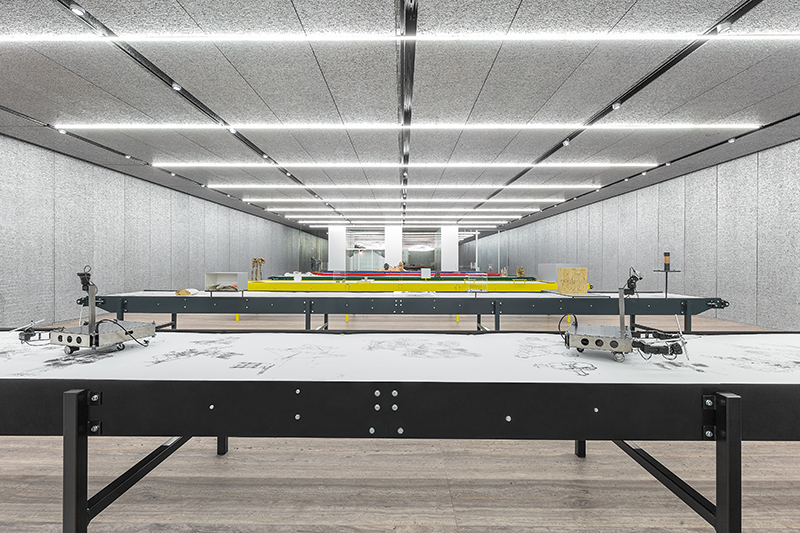 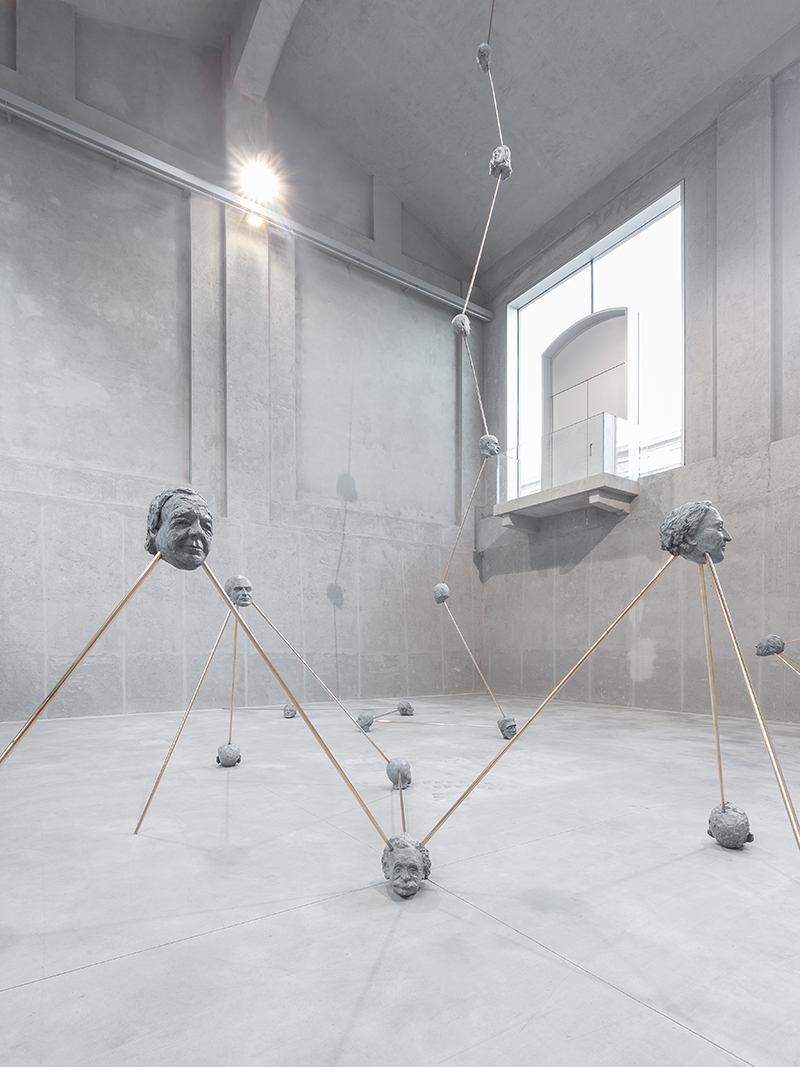 To the Son of Man Who Ate the Scroll

Images courtesy of the artists and Fondazione Prada