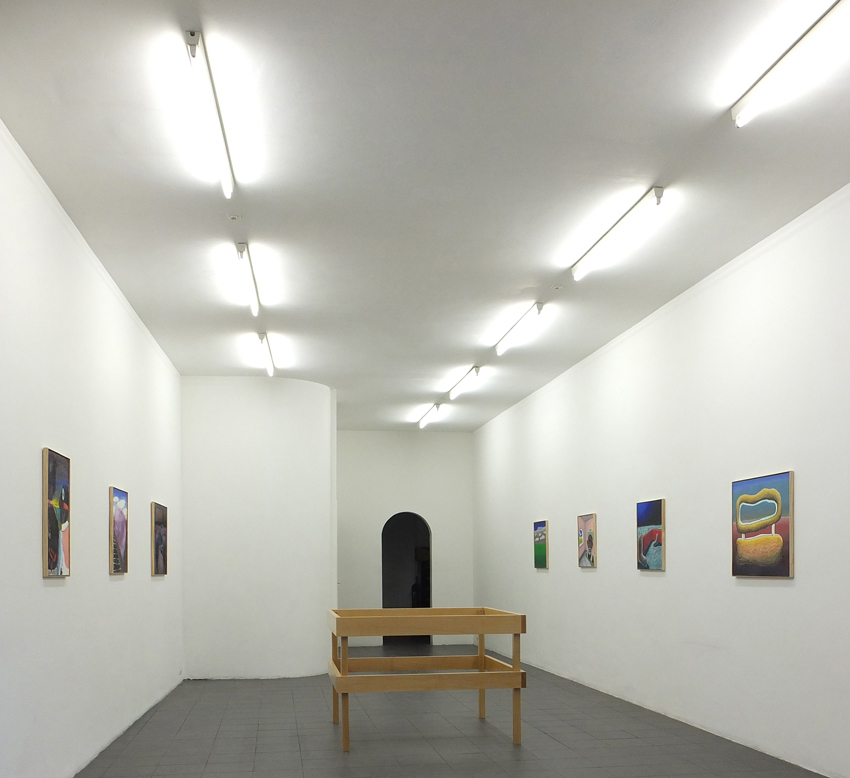 The work of the Brussels-based Dutch artist Gijs Milius hasn’t been presented that much, so we were very excited to find out that Milius has a solo exhibition at Etablissement d’en Face this autumn.

The artist explained that he was temporarily without a studio when the people at Etablissement proposed him to work there for some time. The works in OF/OF OFWEL EN/OF – OU/OU OU ET/OU, produced during what turned out to be a short residency in the exhibition space, all relate to that same space and it surroundings. Rather then trying to render the annoying details of the space invisible, Milius embraced and even enlarged them. The sculptural installation in the front space mimics the banister leading downstairs, creating a fence enclosing empty space. Around this alienating barrier, ten drawing are presented. While they are attractive in colour and form, they all radiate discomfort. There is something disaffecting about these works, which rubs you the wrong way. The depicted scenes are all inspired by the surrounding of Etablissement, and close observers will surely discover some connections to what’s going on outside.

In the basement space, this alienation continues. In the back space, you find a meeting table with some folding chairs and an ashtray. This installation refers to a two day intervention Milius did earlier this year. In the exact same space, he showed six ceramic ashtrays. Each ashtray had a user. The six smokers worked in shifts, so that there would be a group of three persons at a time meeting each other and using the ashtrays, and appropriating the room. This idea of meeting and exchanging ideas takes a central role in Gijs Milius practice. For an exhibition last year at Island in Brussels, for example, he portrayed all the people he regularly discusses his work with. The meeting room in Etablissement d’en Face today, empty apart from the folding chairs and the sculptural table, mostly estranges – a feeling that is strengthened by the large sculptures in the adjacent room. A  large figure is sitting against the wall, with one foot bare and his shoe carelessly on the floor. He stares at two other works: a sculptural archway and drawing of man running toward an archway. This scene is overlooked by a giant sculpture of a head-like shape. All works were made in-situ, and this one is so large it will need to be destroyed to be taken out of the space. Finally, on the wall, there is a small shelf with two heads, a collaborative work with Harald Thys titled Brothers visiting art exhibition. 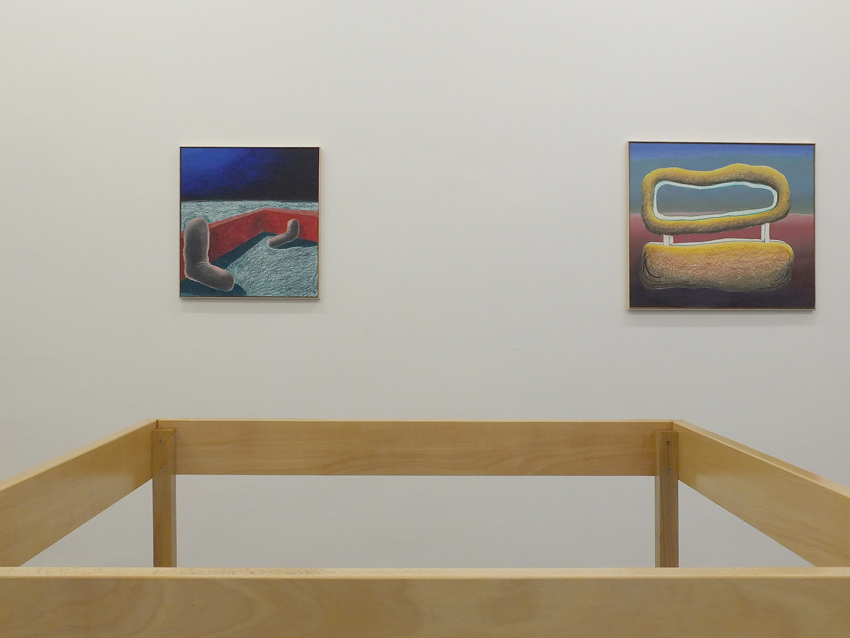 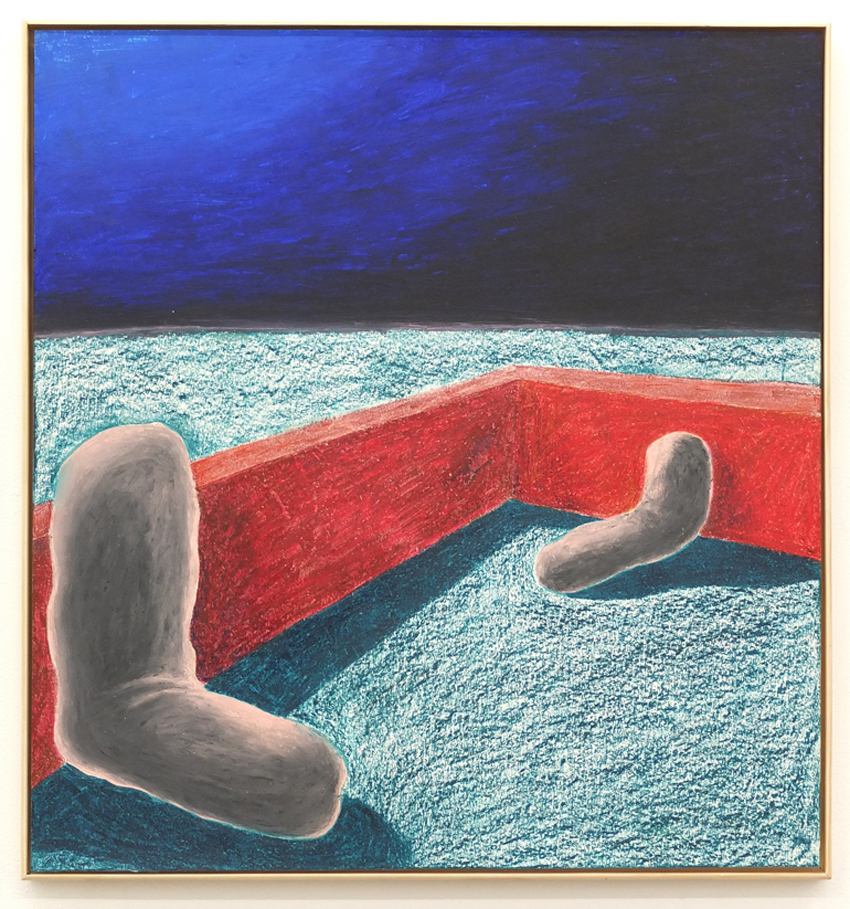 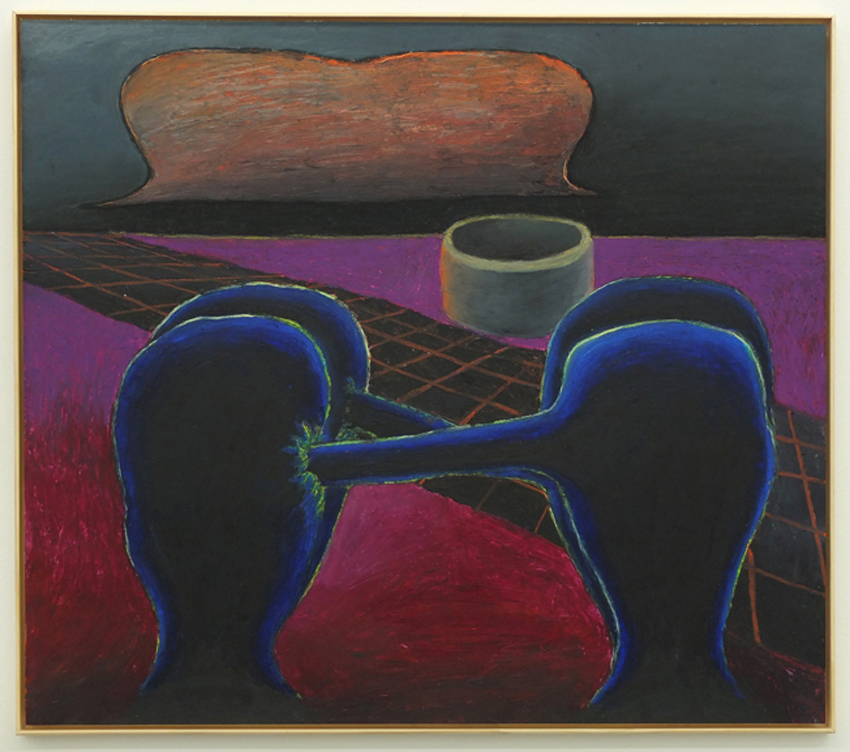 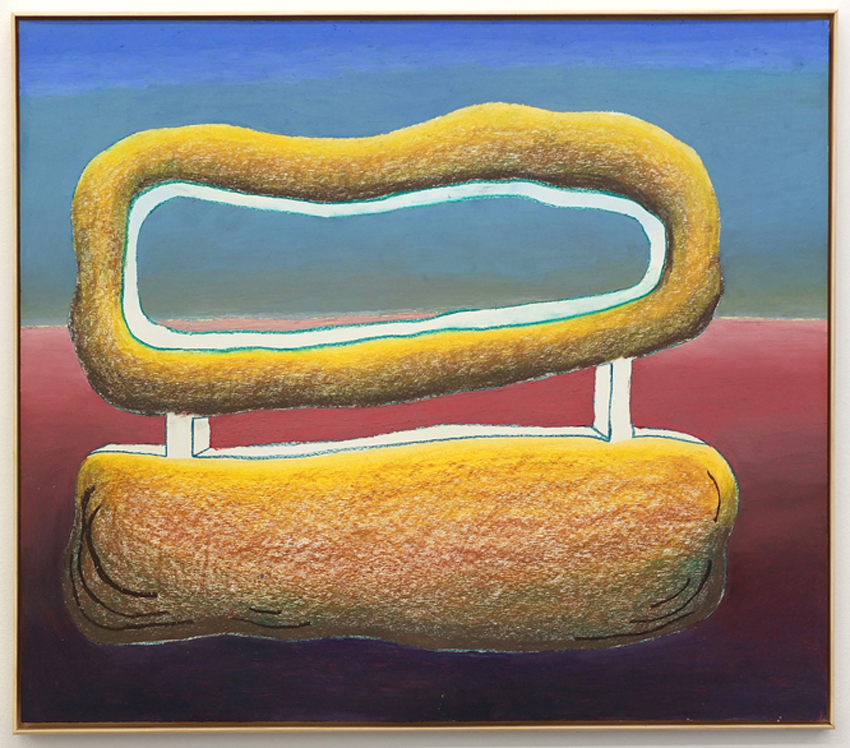 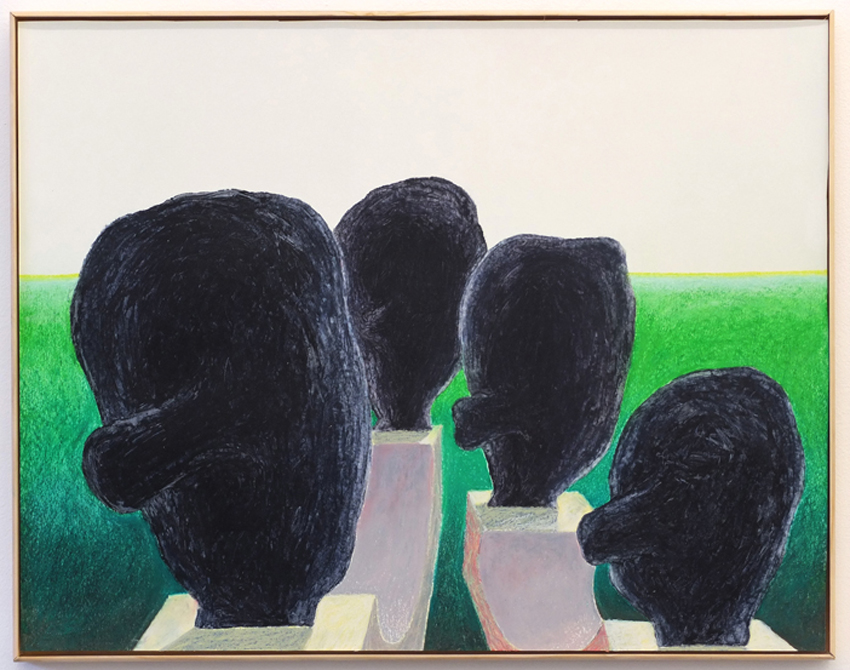 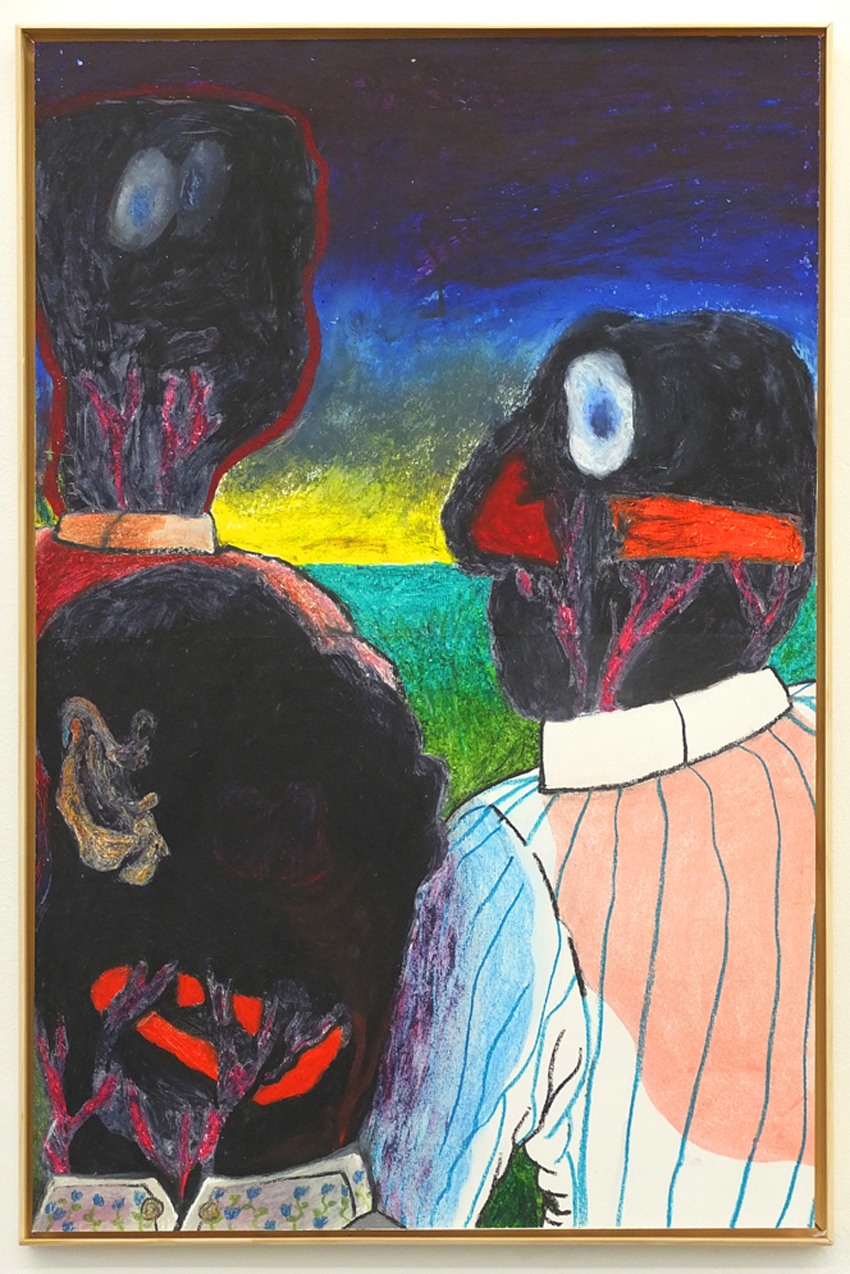 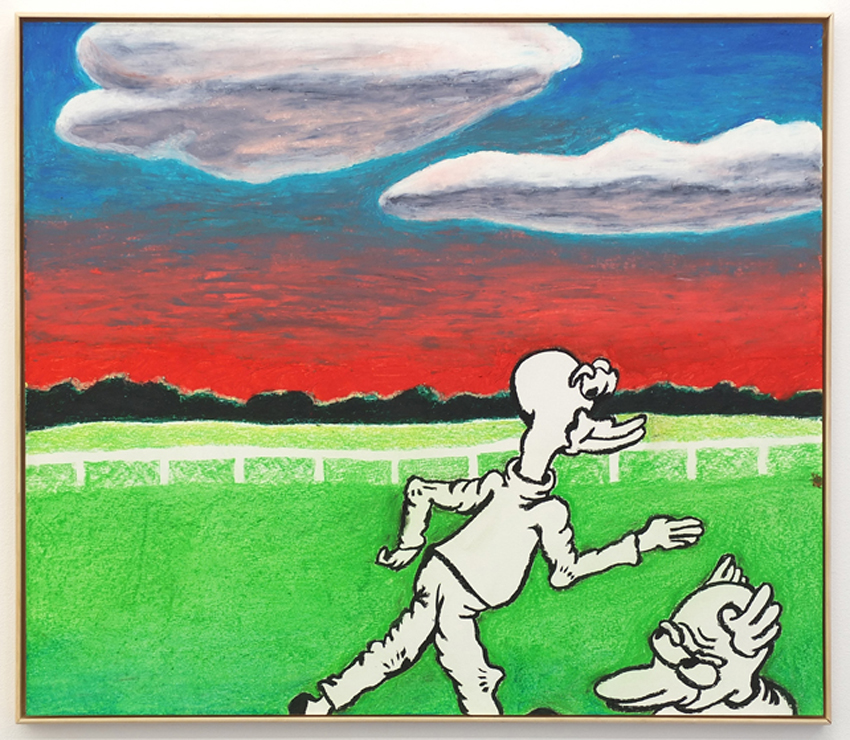 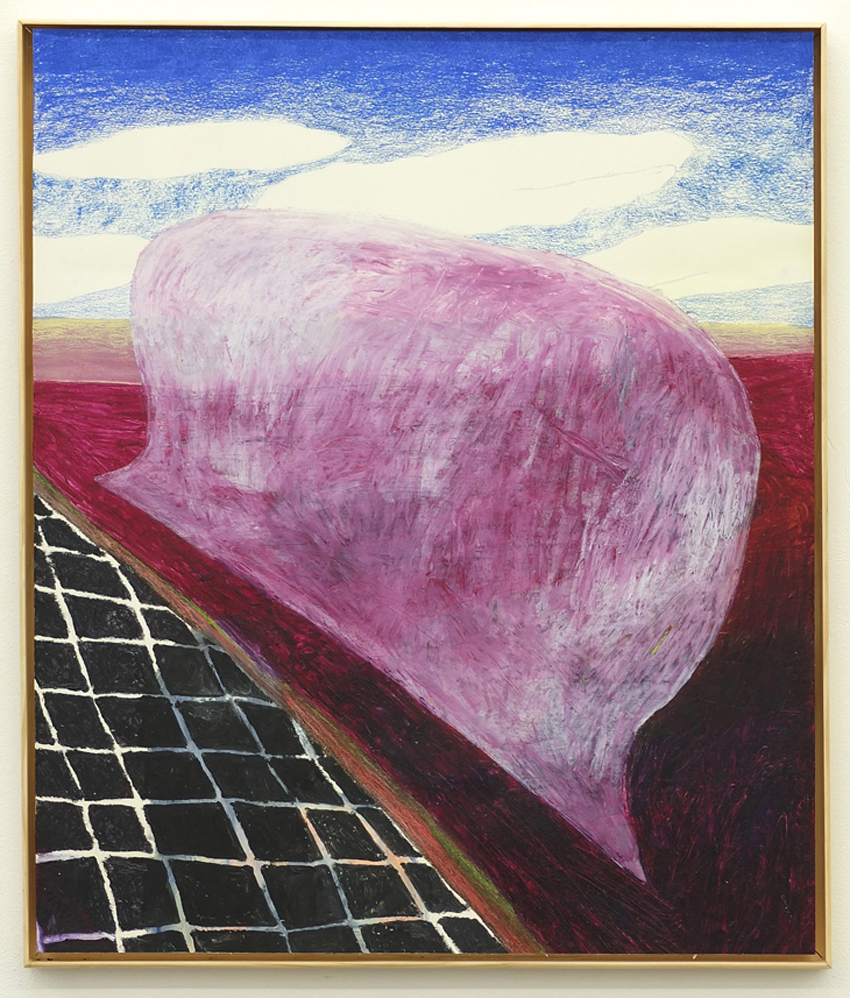 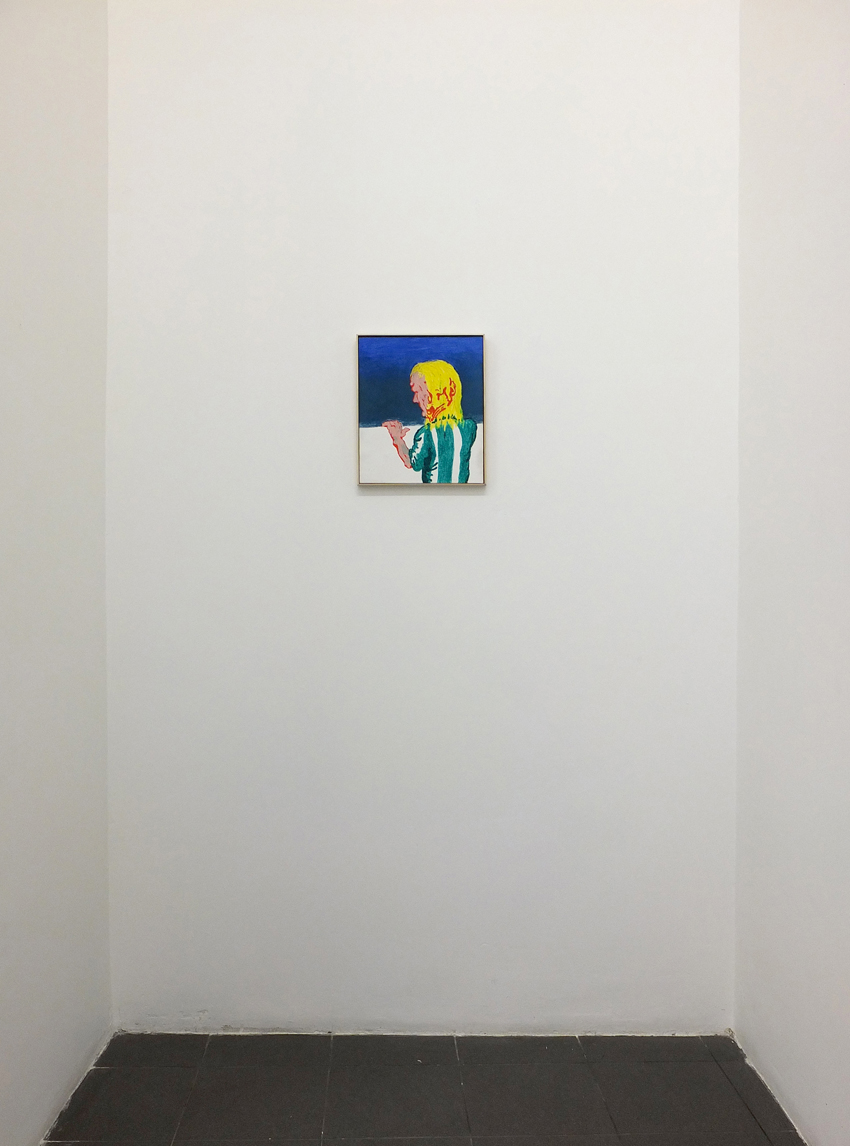 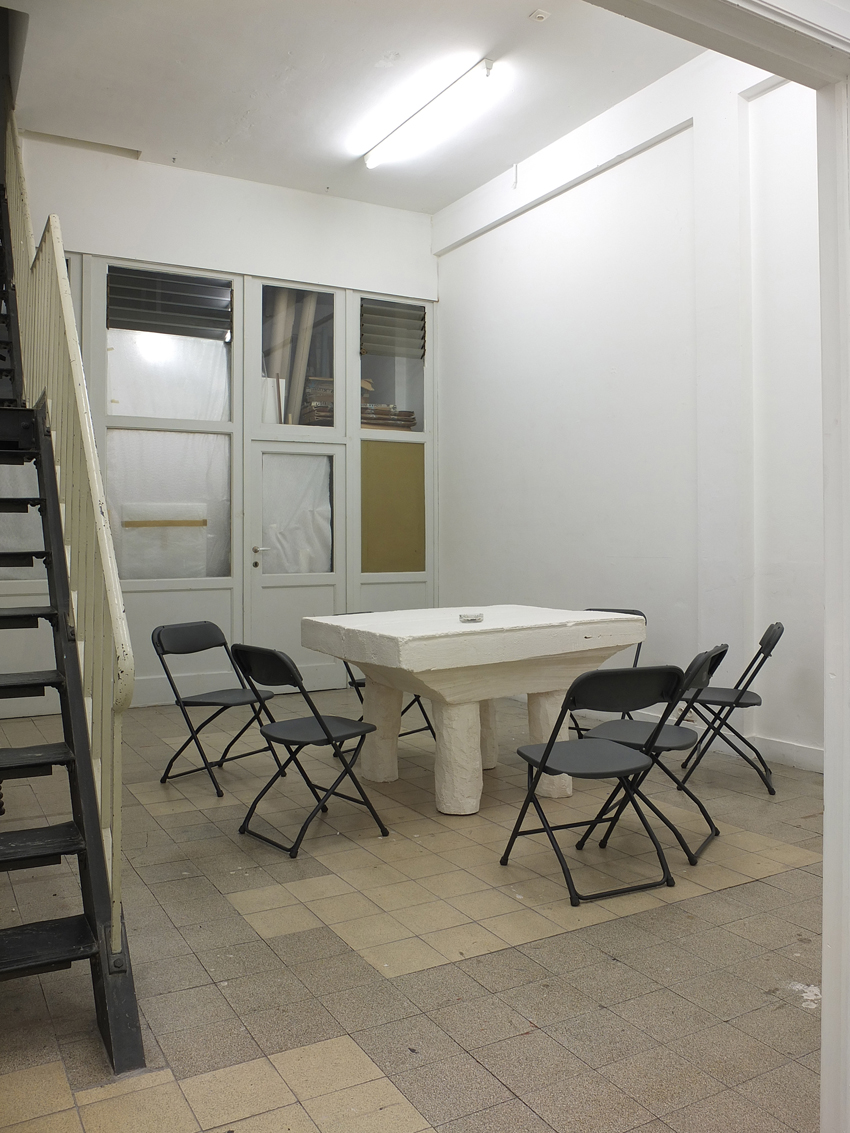 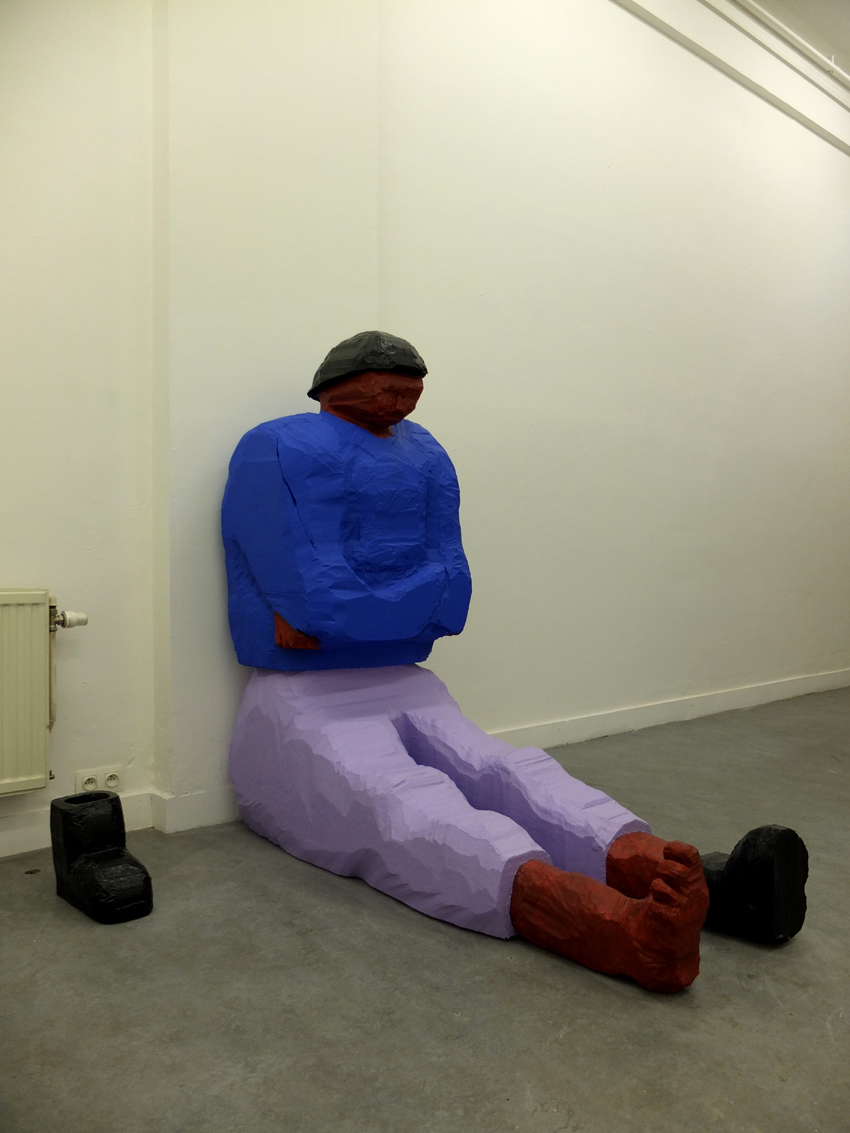 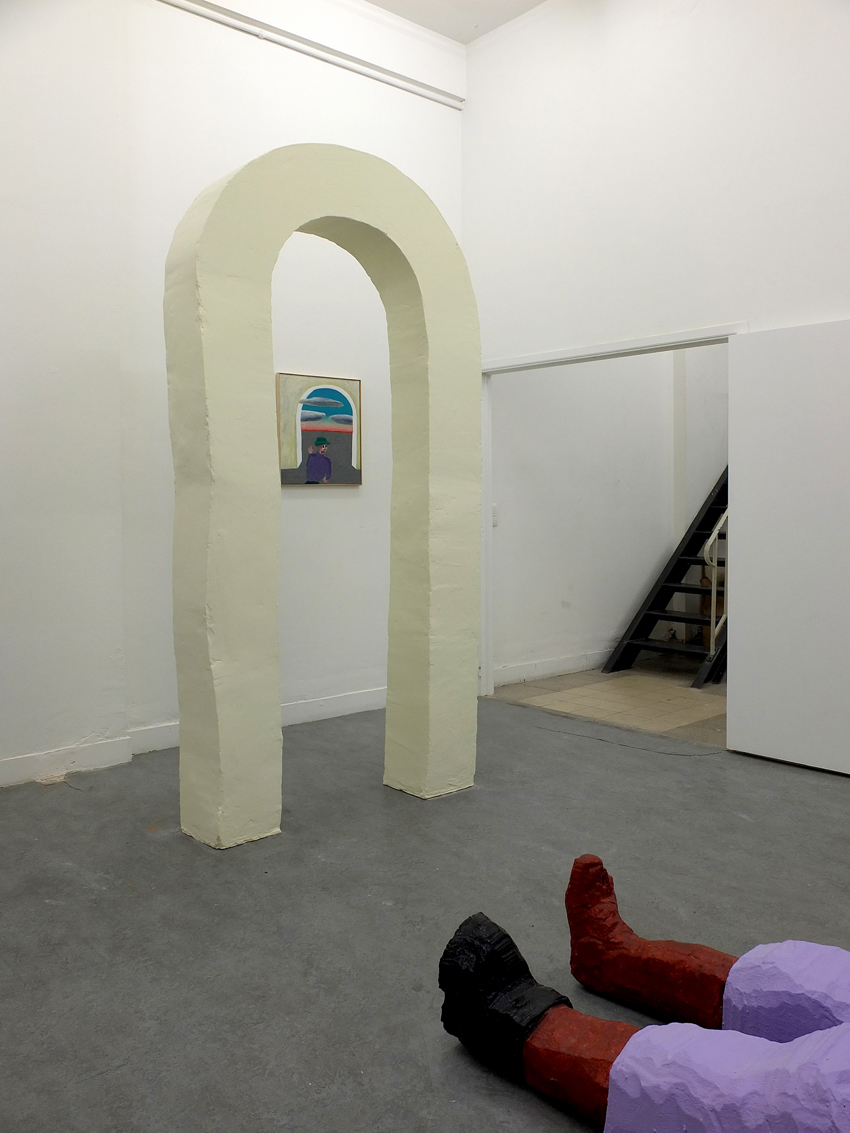 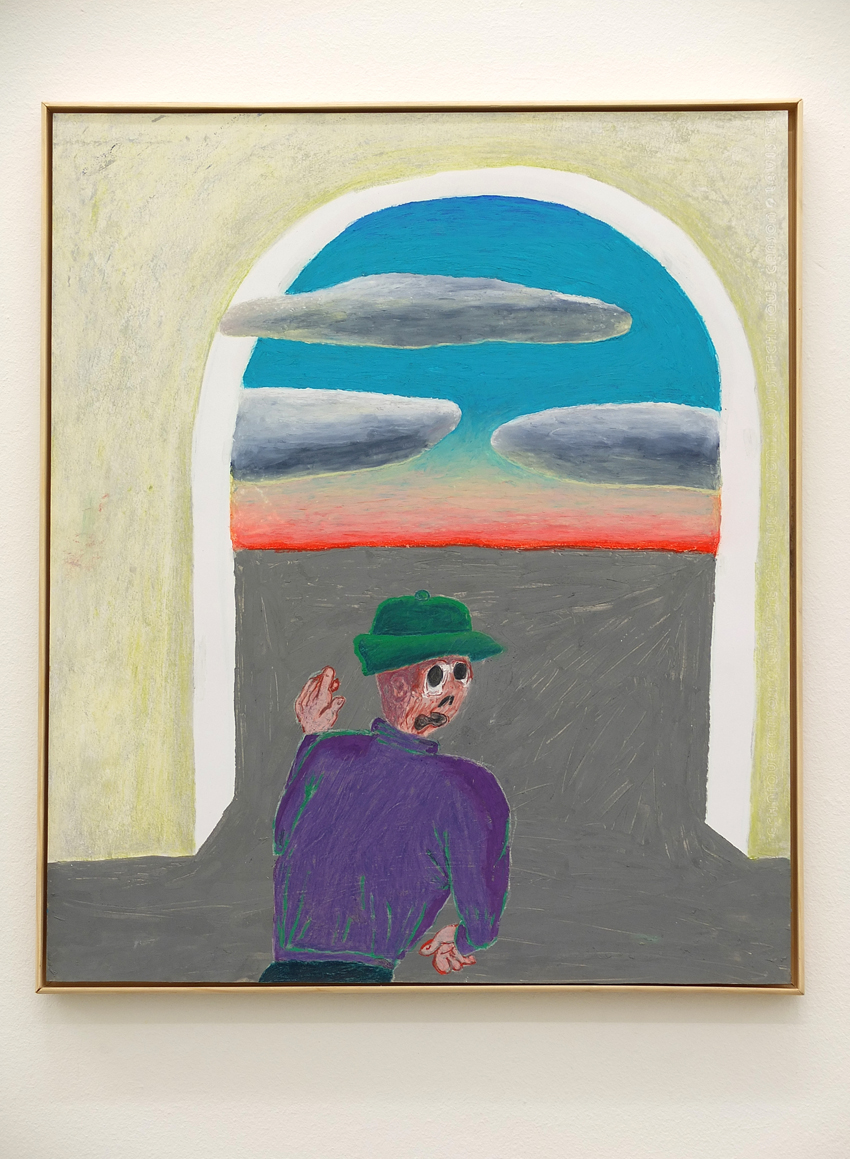 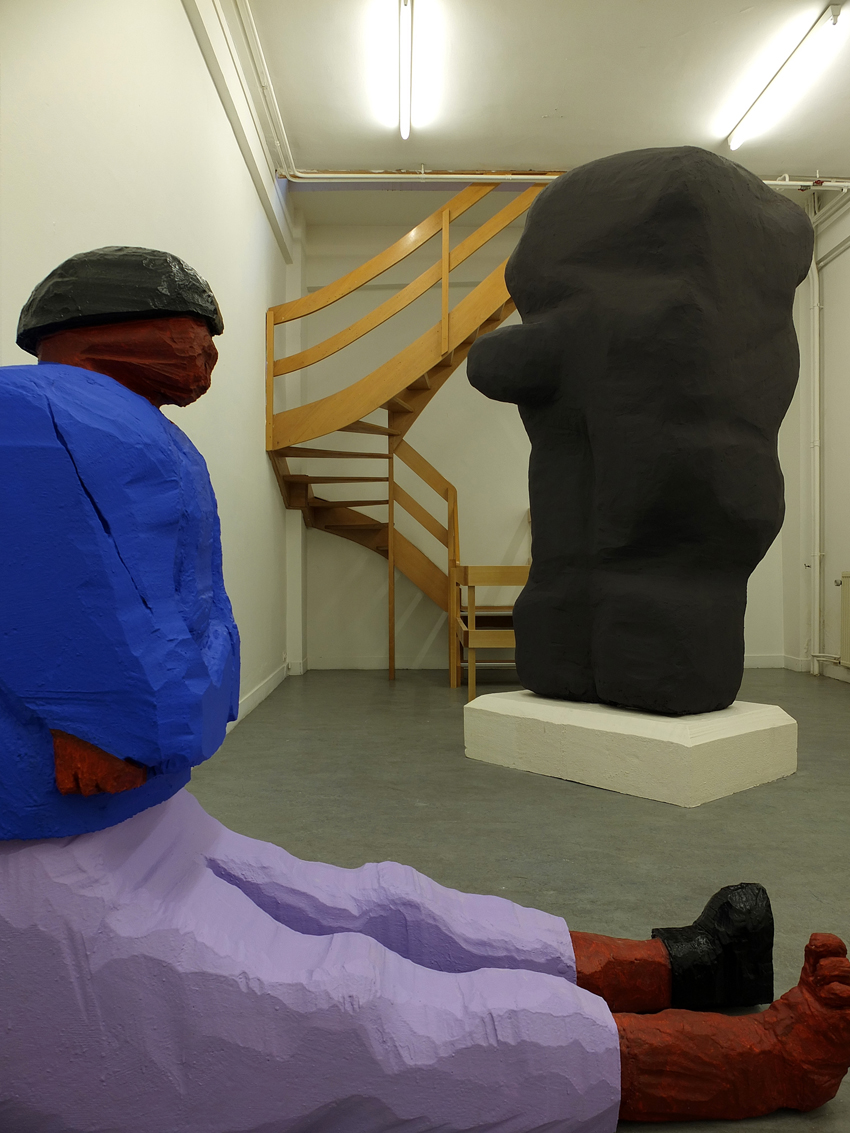 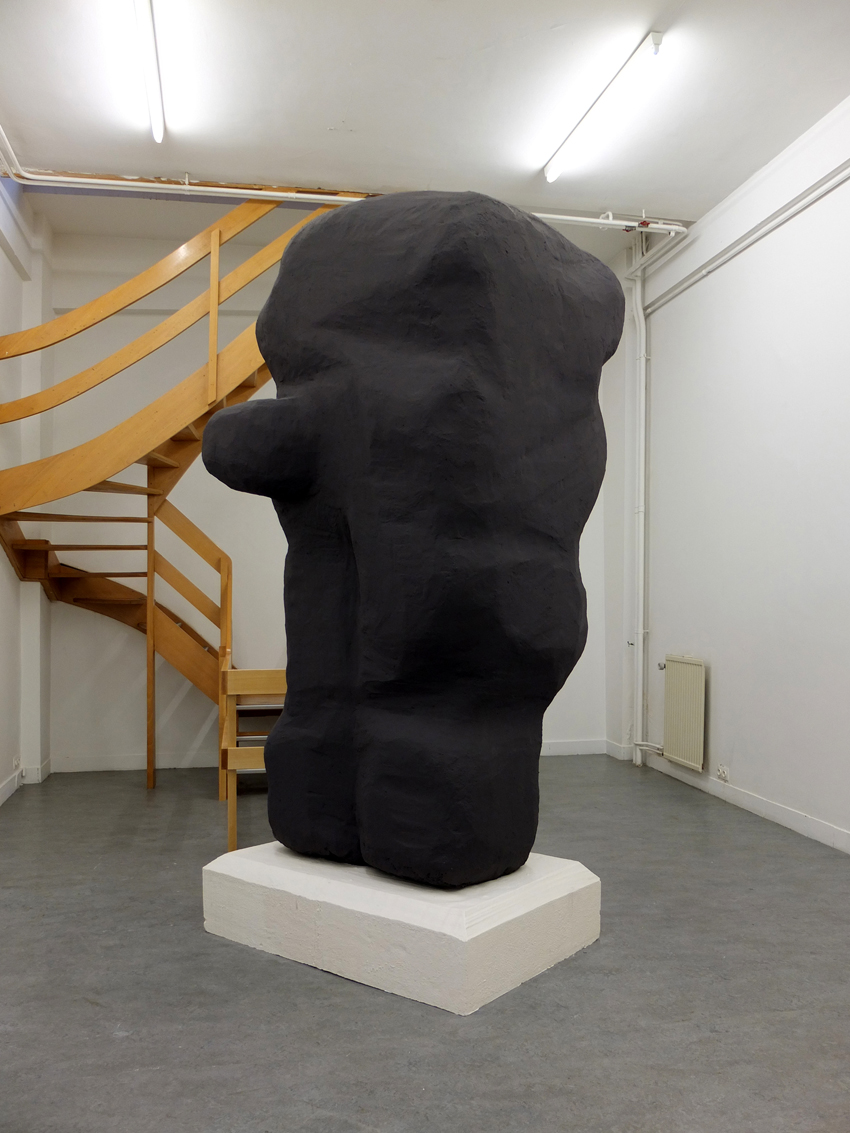 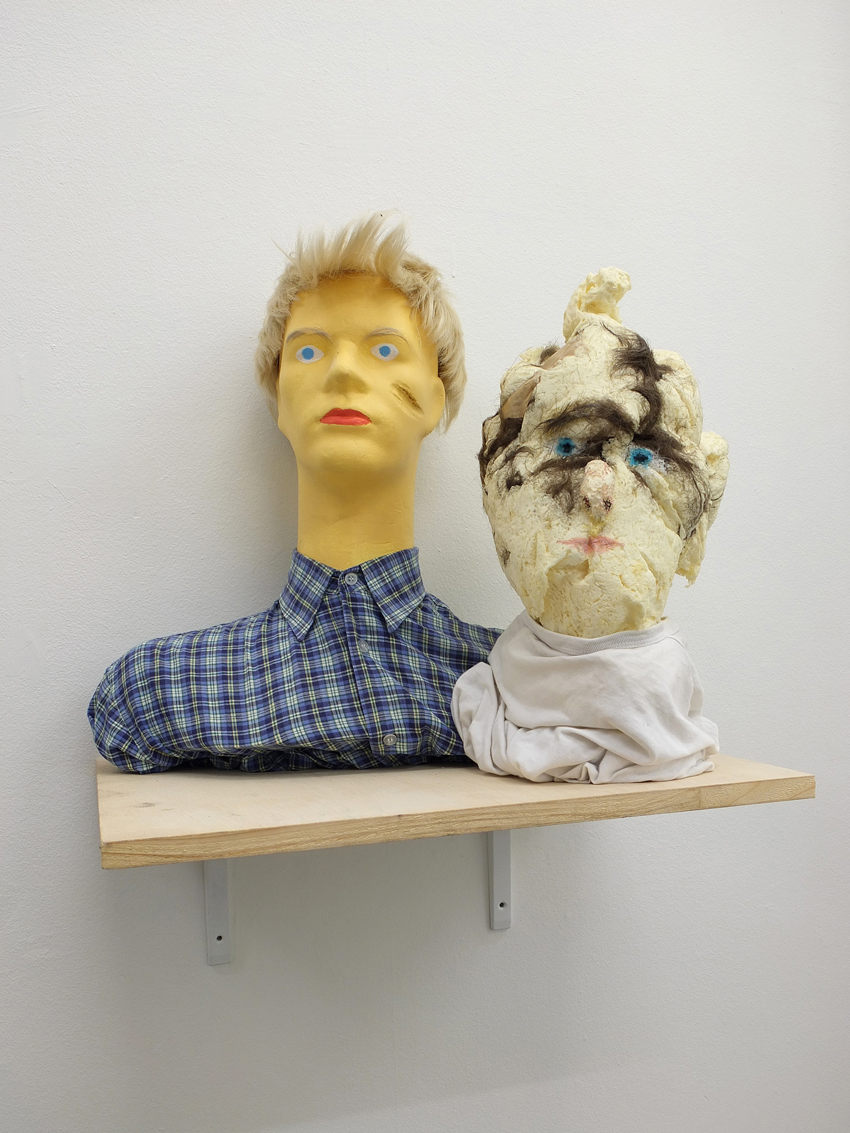 Images courtesy of the artist and Etablissement d’en Face