Five gallery shows to see in Brussels this month

Plenty of Brussels galleries are opening their first show of 2016 this month. We’ve selected five exhibitions for you to discover. If you plan to do a day of gallery hopping, we advise to start at the top and just work your way down the list. It’s a 40 minute walk, ending at the Place Poelaert where you have a breathtaking view over the city.

If you’d like grab lunch along the walk, we encourage you to stop by Knees to Chin for some rice paper rolls or by Mont Liban for a quick Lebanese snack. Both are conveniently located halfway the walk.

Hopstreet’s first show of the year Zodiaco is a resumption of the show Italian artist Davide Bertocchi curated at Car Drde, Bologna in 2014. The exhibition is build up around the Zodiac, which could be considered a very ancient way of measuring the passage of time. A time that is immeasurable, paradoxically in suspense and infinite, as it was in Gino De Dominicis’ “Lo Zodiaco” (In this 1970 performance work, De Dominicis arranged a group of people and animals (live lion, a young virgin, a real set of twins, two dead fish, etc.) representing the astrological signs in a spacious underground garage.) But the Zodiac could also be considered in a cosmic and astronomical sense, elusive and metaphysical. The key to this exhibition lies in thinking all of these various registers together: the zodiac as a unified and preexisting structure. Rather than acting as a traditional curator, Bertocchi inserted the works into this structure. He made use of the zodiac as a system in his choice of the works, allowed the limitations of the system to guide him in making aesthetic and logistical choices within what is an overwhelmingly vast artistic cosmos. For Zodiaco, artists were chosen based on their astrological signs. Others were excluded for the same reason. As a group they make up a totality – a circle – of the thirteen major signs. 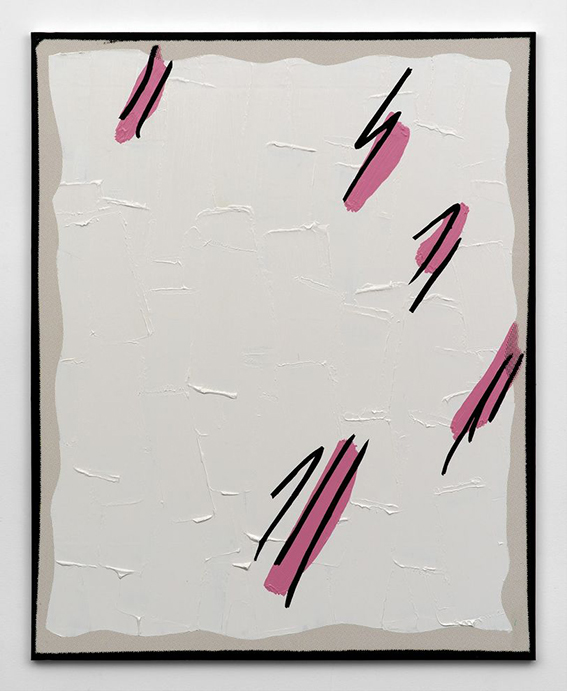 This show is not at Hufkens’ project space, right next to Hopstreet Gallery, but in their primary space – a large townhouse further down the road.

At the heart of this exhibition is a new series of paintings that belong to one of Lavier’s most iconic bodies of work: Walt Disney Productions. The starting point for the project, which began in 1984, is to be found in a Walt Disney comic strip from 1977, in which Mickey and Minnie Mouse visit a modern art gallery. Here, they encounter an array of paintings and sculptures that ingeniously mimic genuine modern and contemporary art. Fascinated by this, Lavier started to make life-size replicas of the Disney artworks. Hence his colourful, abstract canvases are directly inspired by the paintings that sprang from the cartoonist’s imagination but which, in their own humorous way, were undoubtedly based upon real works of art. By appropriating the fictitious paintings from the inaccessible, printed page and presenting them as autonomous objects within a real gallery space, Lavier recreates an equivalent viewing experience to that of Mickey and Minnie. This loop calls into question the link between fact and fiction and the representation of modern art in society. Interestingly, the striking simplicity of Lavier’s compositions and the thick, painterly surfaces belie their technical complexity: each canvas incorporates a number of different materials and techniques, ranging from photography to laser-jet and silk-screen printing. 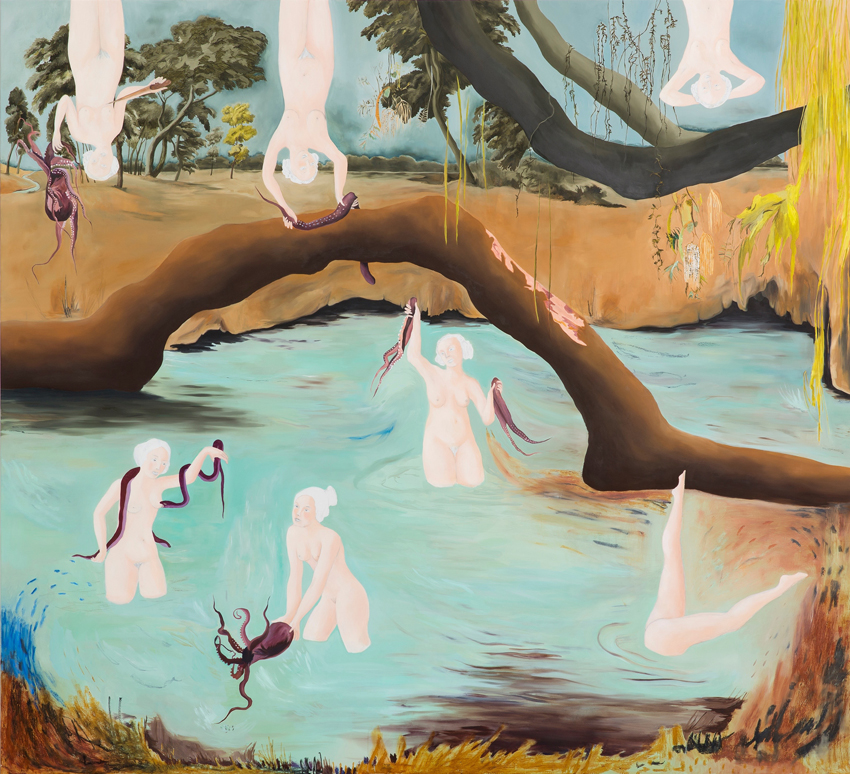 Sanam Khatibi – A distinct affection of a more animal kind, 2016. Courtesy of the artist and Rodolphe Janssen, Brussels

Following visits to fifty-some artists studios in Belgium, the gallery now present works by nine very diverse and emerging artists. The exhibition wants to put a spotlight on talented artists who haven’t yet had many opportunities to show their works. The aim of the exhibition is not to give an overview of the Belgian art scene; it is rather a reflection of things that caught the gallery staff’s attention.

We are really interested in Etienne Courtois’ work, balancing on the border between photography and painting – sometimes with a literal overlap between both. The works on paper by Alejandra Hernández are also a must-see. We are caught by her direct, slightly naive, style of drawing and her fascination with aesthetic elements of primitive magical cultures. Finally, we also would like to draw your attention to Sanam Khatibi’s wonderful orientalist paintings. Her subjects are caught between power and failure; splendor and fragility; and fear and desire, often set in exotic-looking landscapes. 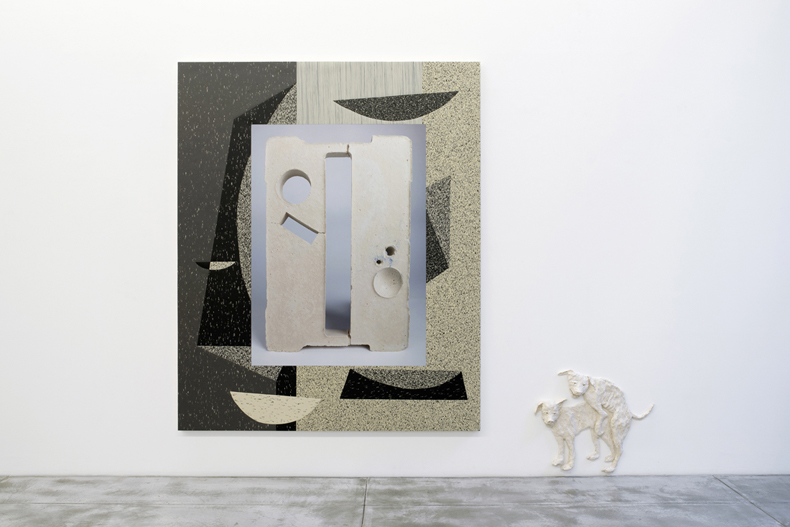 In her first solo at Albert Baronian, Aline Bouvy questions issues related to the norms that unconsciously model our desires and dictate to us what is morally and aesthetically acceptable. From this perspective she tries to integrate residues considered morally “dirty” or aesthetically “ugly”, in order to liberate herself from the constructed categorization commanding us how to live our lives.

Bouvy shows a number of linoleum panels, each with an integrated photograph, either showing a blurred male nude veiled by plants or an abstract plaster sculpture. The plants in the photographs are gathered on different wastelands across town, metaphors for the dark holes in our over-cultivated urban fabric. The plaster sculptures in two of the photographs are made of gypsum and the artist’s own urine. Spread through the gallery there is also a series of bas-relief-like sculptures of stray dogs. They remind us that the structure of the exhibition, like the one of our society, would otherwise be drawn out too neatly. Bouvy sees the stray dog as a symbol for a newfound freedom, necessary to survive in an environment created by man.

Urine, stray dogs and plants from wastelands thus appear as disturbing elements, disrupting clear order and rules, questioning the usefulness of a residue, of the things that appear beyond what is desired in a harsh but poetic way. 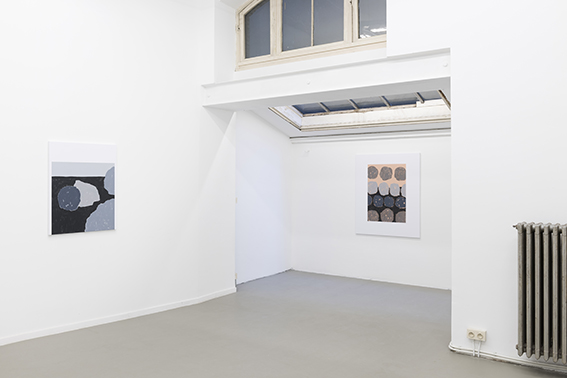 Fuller’s newest work moves away from the earlier, more conceptually grounded series such as his Wu-Tang or Clock paintings. These new series focus more on the gesture of painting itself, investigating different ways of applying paint and the positioning of the image on the canvas. Fuller says his interest in the ways of mediating an image this way probably comes from looking at books, and at how images are positioned on pages.

It’s a small show, just six paintings, but really worth the stop.
While you’re at Regence 67, drop by some of the other amazing galleries located in this building.