For her first solo exhibition at PSM, Catherine Biocca transformed the gallery space into an immersive environment containing videos, sculptures, and wall works. The gallery takes on the feel of a waiting room by using PVC prints that look like the interior of a rundown space, and whose design is modeled on the rebuilt interiors of Villa Boscoreale and Boscotrecase near Pompeii that were partially destroyed during the eruption of Mount Vesuvius in 79 AD.

There are also two metal sculptures with large heads made from printed aluminum that are reminiscent of stick figures, which can be read as bored waiting customers, perhaps dwindling away from the ridiculously long waiting time. Five animated videos with sound intersperse throughout the gallery, lending the exhibition some visual and aural dimensionality. In one of the videos, a voice can be heard talking to a customer service agent, who is not being at all helpful, but who turns out to be the inner voice of the customer himself—despite this, there is constant miscommunication between the two. Another of the videos shows a knife moving quickly between the fingers of a digitally drawn hand—a sick game called five-finger fillet that can be seen on YouTube. A third video shows a slightly moving dog (underneath a yawning human-dog animation) on a screen embedded in a dog bed, alluding to a dead guard dog found at the ruins in Pompeii.

Continuing her series of animated paintings, there are several wall works made from printed PVC with industry marker drawings of classical figures on them that have aluminum printed faces that gesture toward classical Roman and Greek statues. The drawings are made with two colors: one to represent one time, and a second color to represent another, intimating the progression of movement. Cumulatively, the works create an almost creepy atmosphere, an in-between place where our expectations are met and frustrated at the same time, much like many customer service lines today. This dioramic installation continues Biocca’s interest in exploring the absurd or comical elements of existence that we encounter every day, and in this way pinpoints with laser accuracy the various unquestioned and often strange levels of society through which we walk and talk. 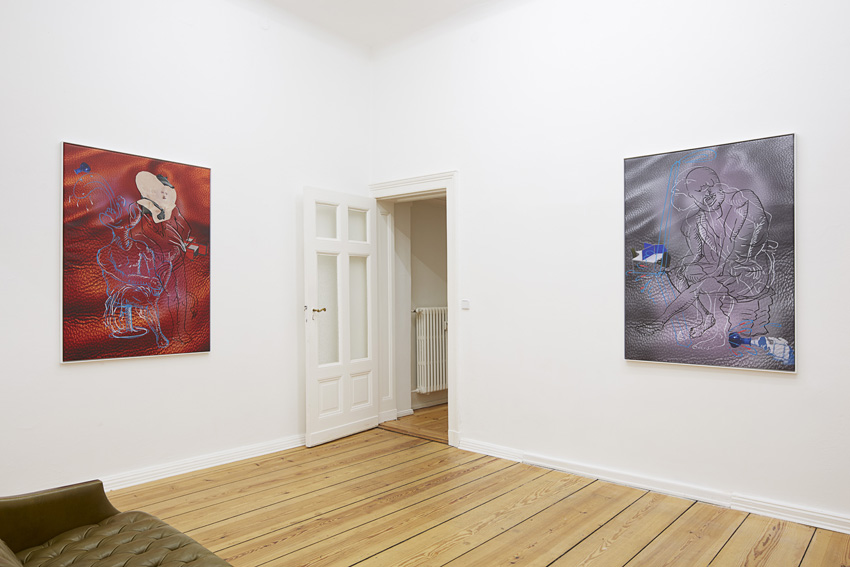 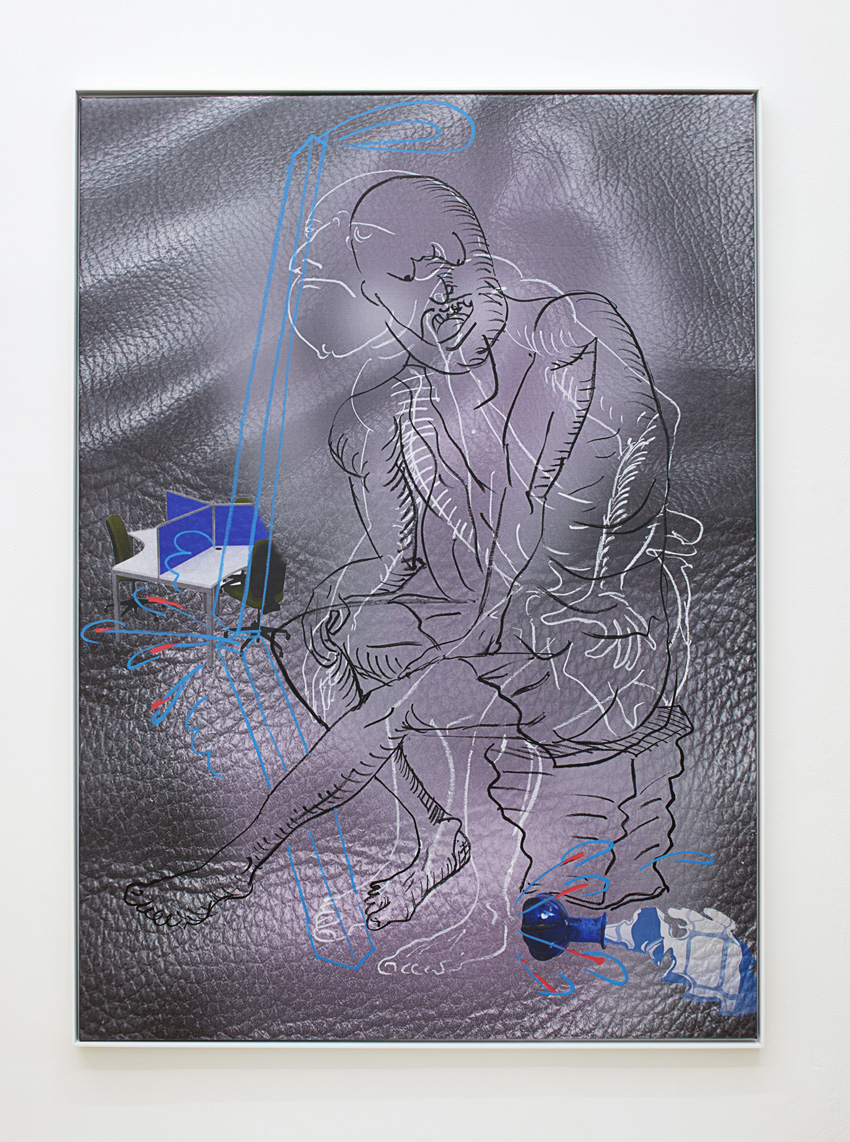 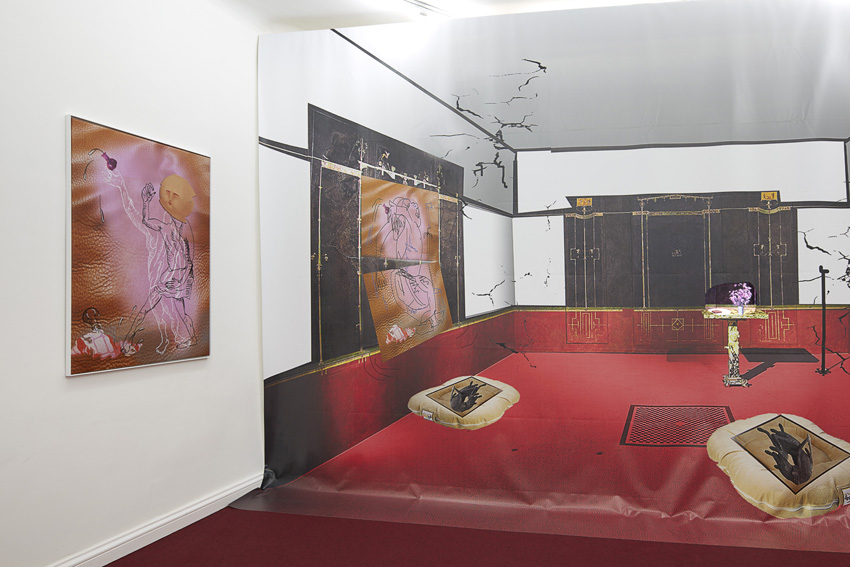 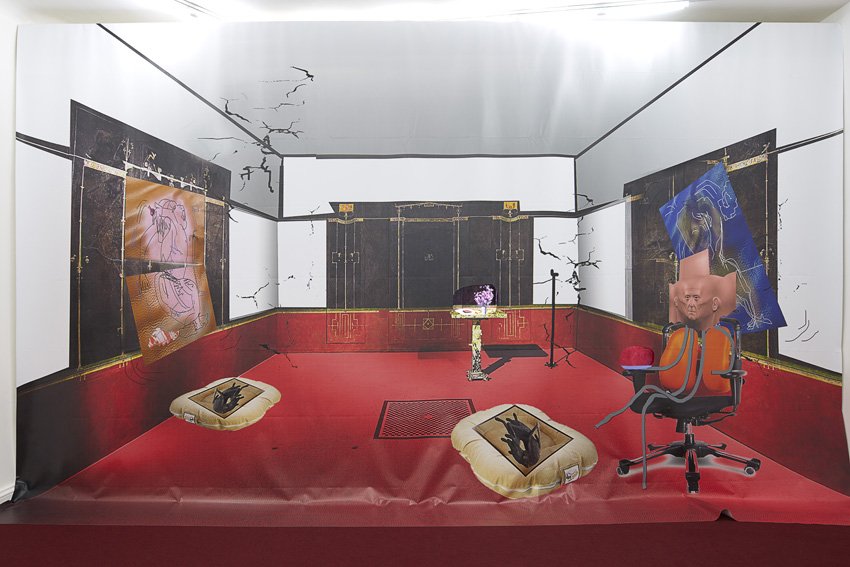 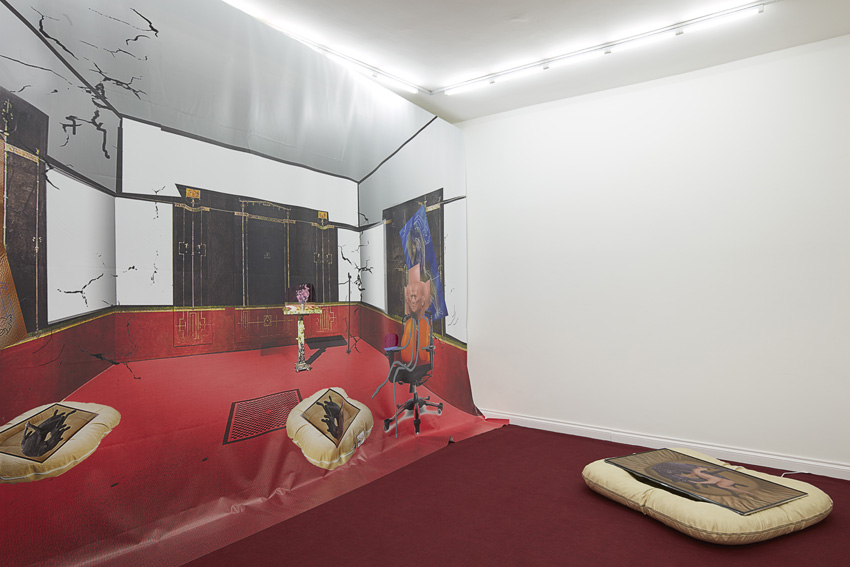 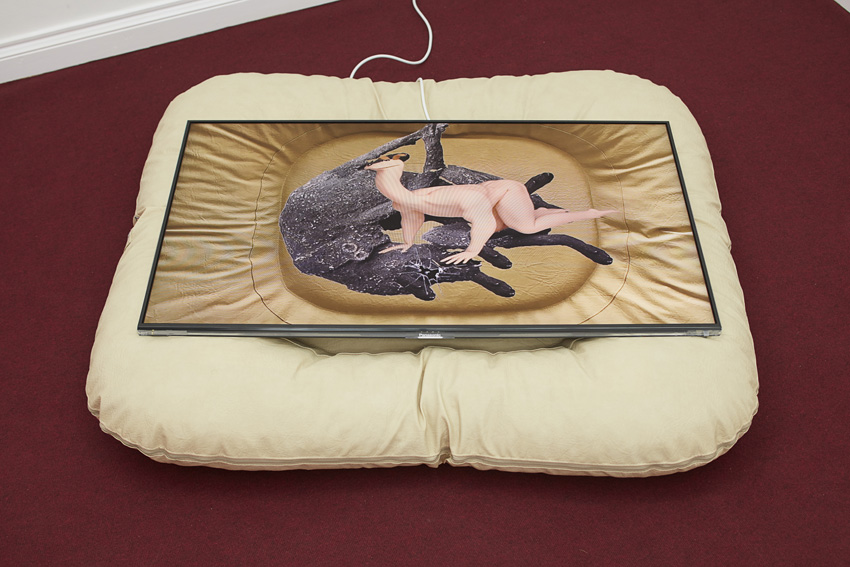 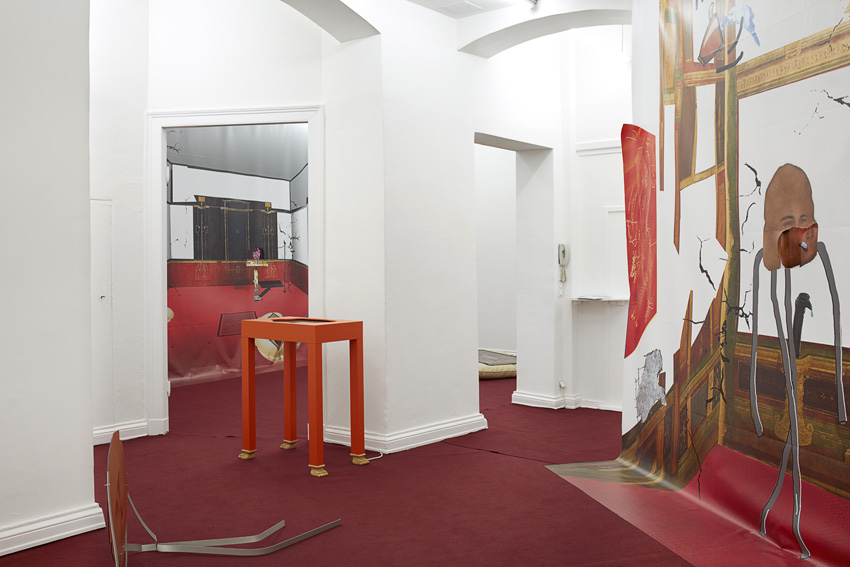 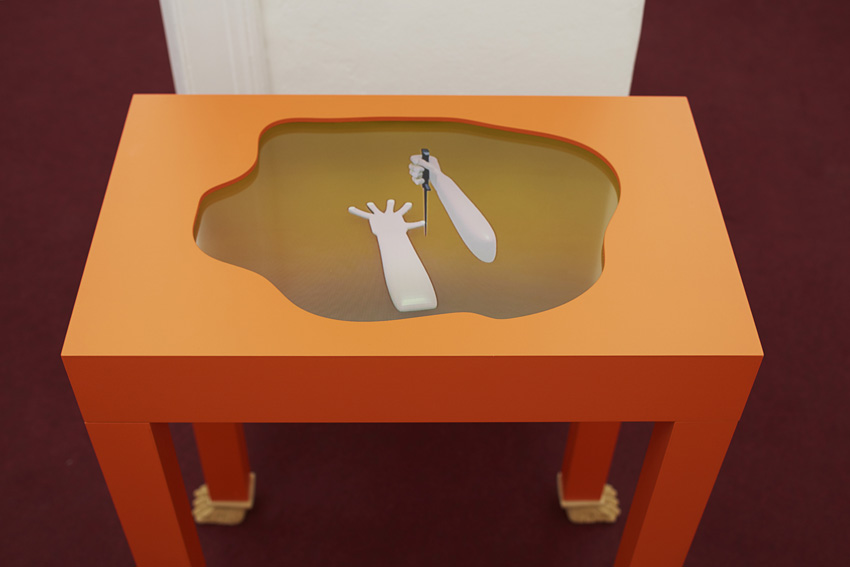 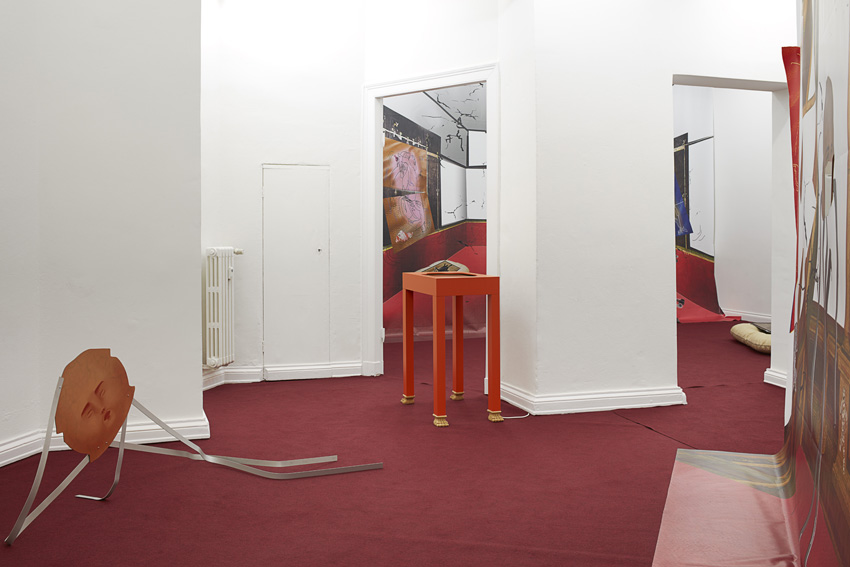 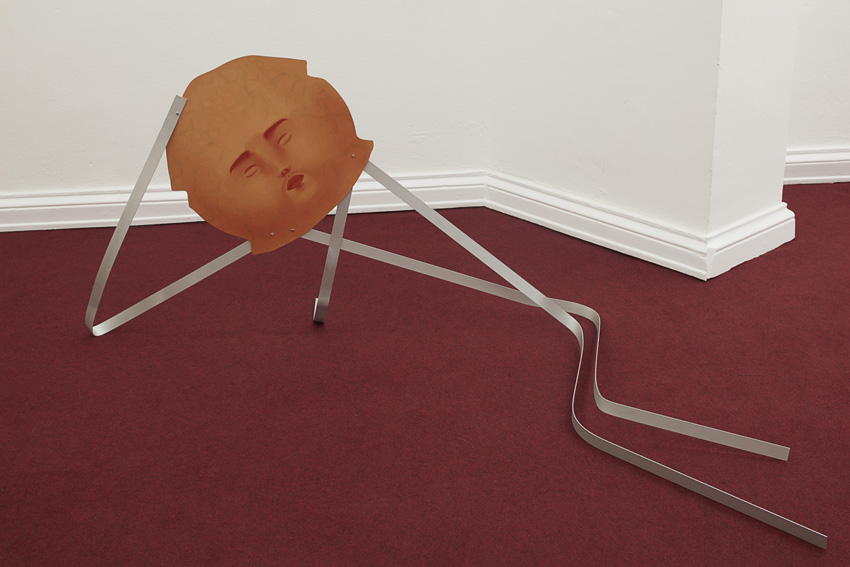 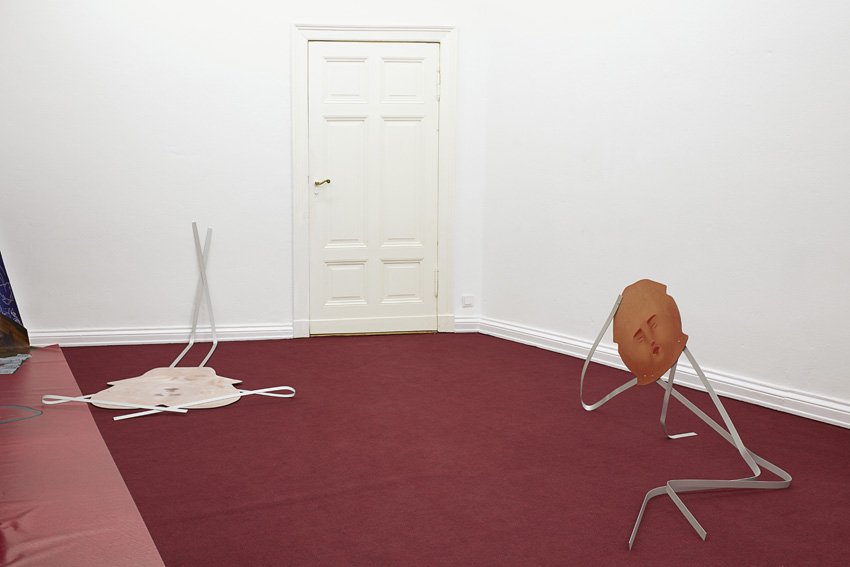 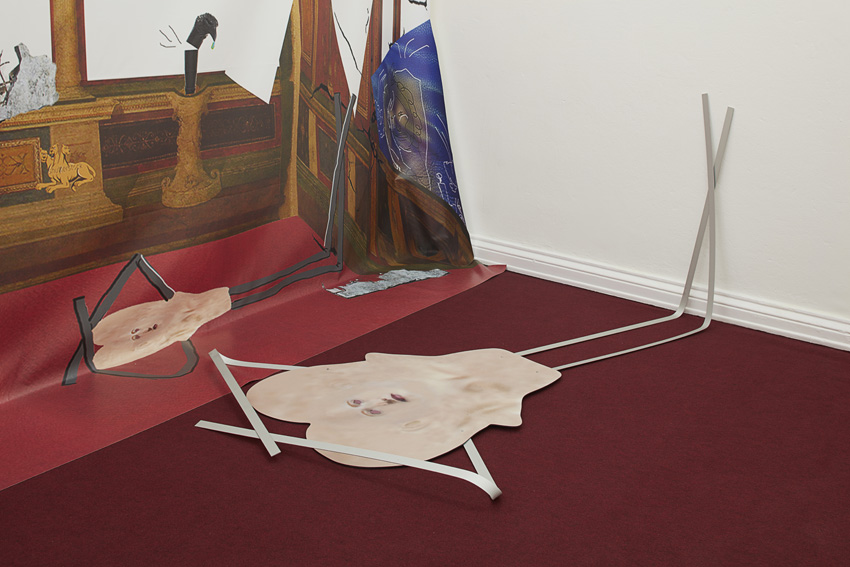 Courtesy of the artist and PSM, Berlin 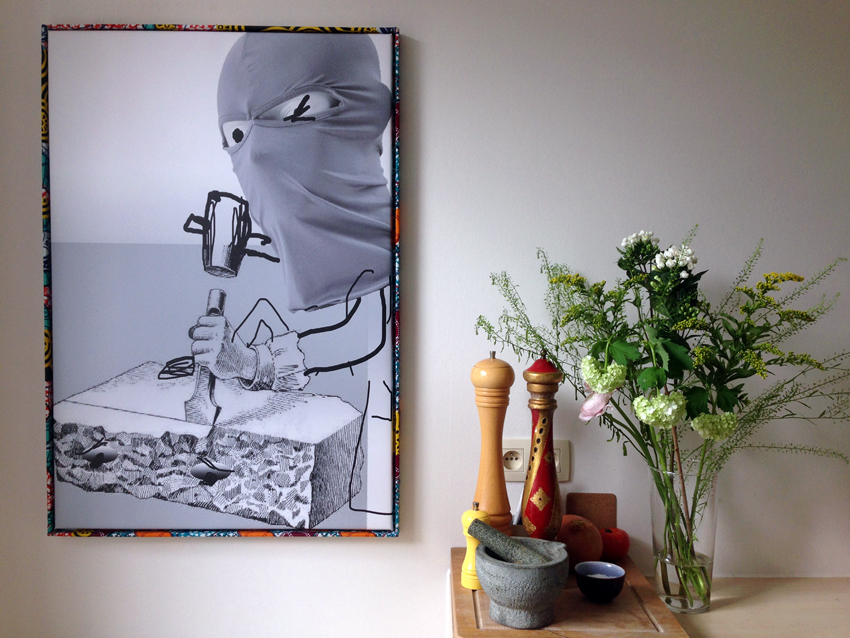