In her work, Aleksandra Domanović takes a probing look at a wide range of phenomena of contemporary society, among them cultural techniques, scientific and technological developments, history and culture, popular culture and the shaping of national and cultural identity. Her work often has its starting point in the examination of the past and present of her home country, the breakup of Yugoslavia after the end of the Cold War, the collapse of the Soviet Union and the struggle for a new national and cultural identity. Many of her works are thus informed by her own biography, but they also set a universal example of the artistic examination of national and cultural identity, individuality, collective visual memory and commemorative culture. Domanović’s works are precisely conceived narratives, visualised through the use of iconic images or illustrations taken from other contexts.

Bundeskunsthalle ́s director Rein Wolfs states: “Aleksandra Domanović reminds us of how fast society is able to adopt new habits and also ethics by the use and further development of science and technologies.”

For Calf-Bearer, her exhibition in Bonn, the artist expands on one of her themes – Bulls Without Horns – and looks at current scientific developments in bioengineering, namely research carried out by Alison Van Eenennaam at the University of California in Davis who works on the breeding of certain genetic traits in cattle, for example the lack of horns. The artist not only presents the protagonists of these experiments in colour photographs, she also translates the underlying ideas into sculptures, which she produces by means of computer modelling, 3D printing and casting in synthetic plaster. Made of Corian®, her votive stelae are transformed and abstracted depictions of the sixth-century BC Greek sculpture of the Moschophoros (Calf-Bearer) found in 1866 on the Acropolis of Athens in the so-called Perserschutt, the bulk of the architectural and votive sculptures destroyed by the Persians in 480 BC.

The rectangular stelae of different colours are anthropomorphised by means of stylised arms and hands, which reference not only the hand of the artist but also the so-called Belgrade Hand, the first articulated hand prosthesis developed in 1963. The figures carry the plaster calves on their shoulders or in their shoulders’ stead. The artist fuses science and culture of different eras, questioning not only norms and beauty outside of norms but also structural transformations and their effect on society. 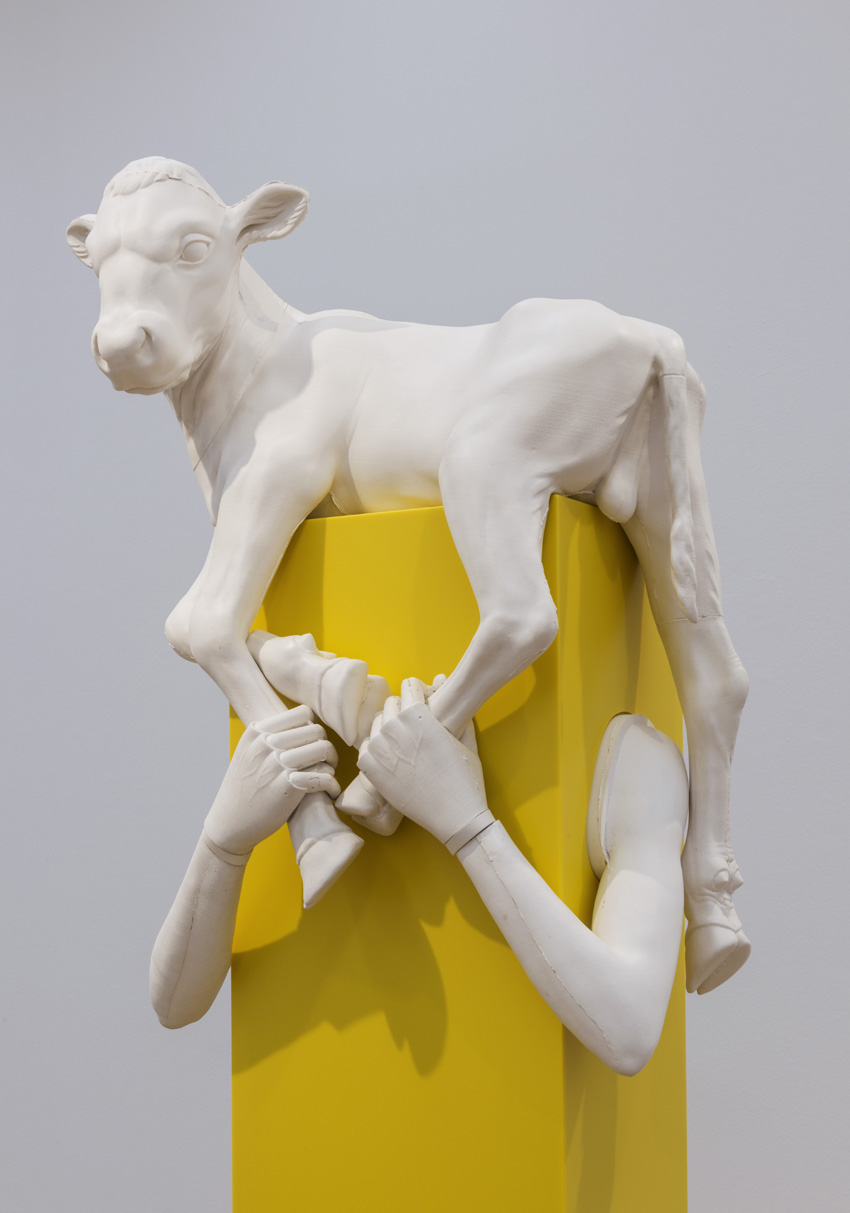 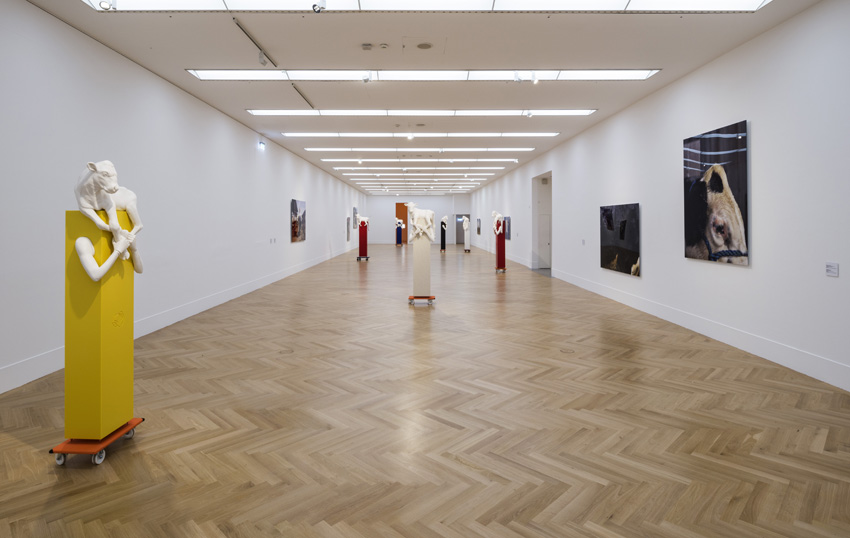 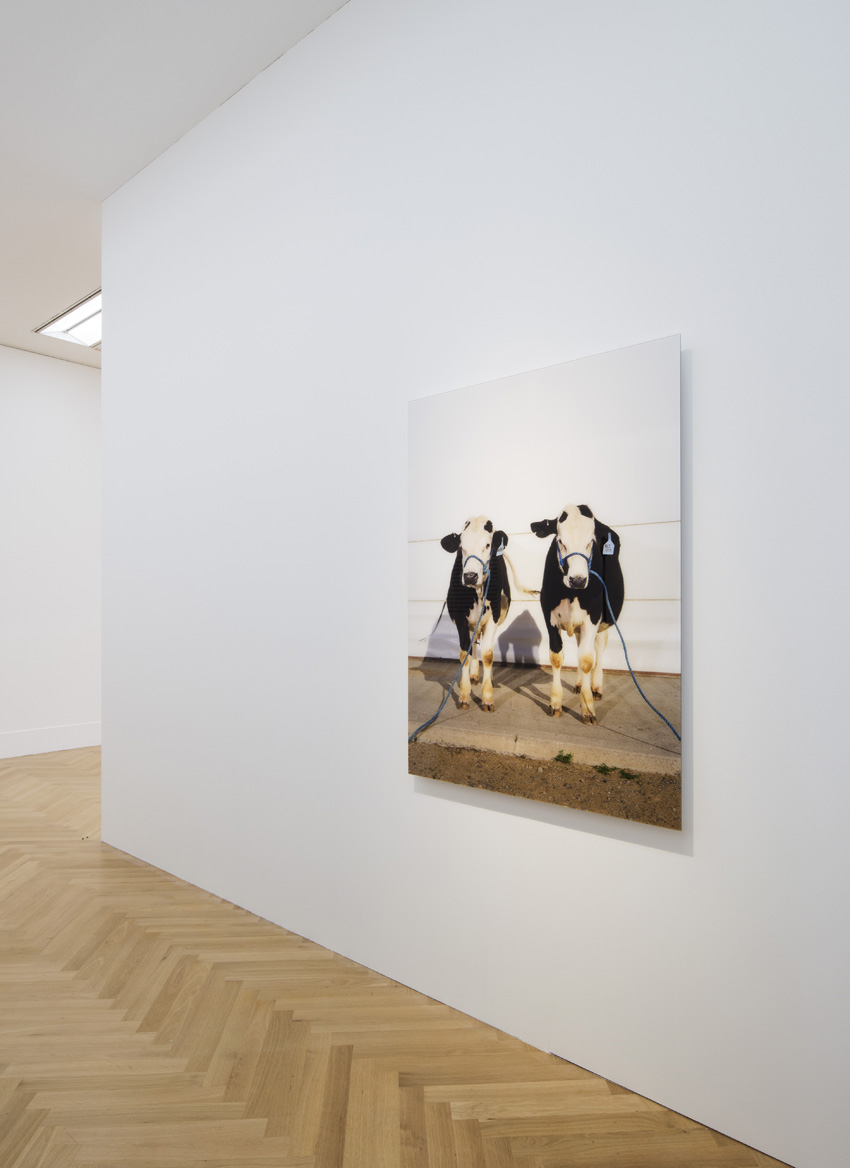 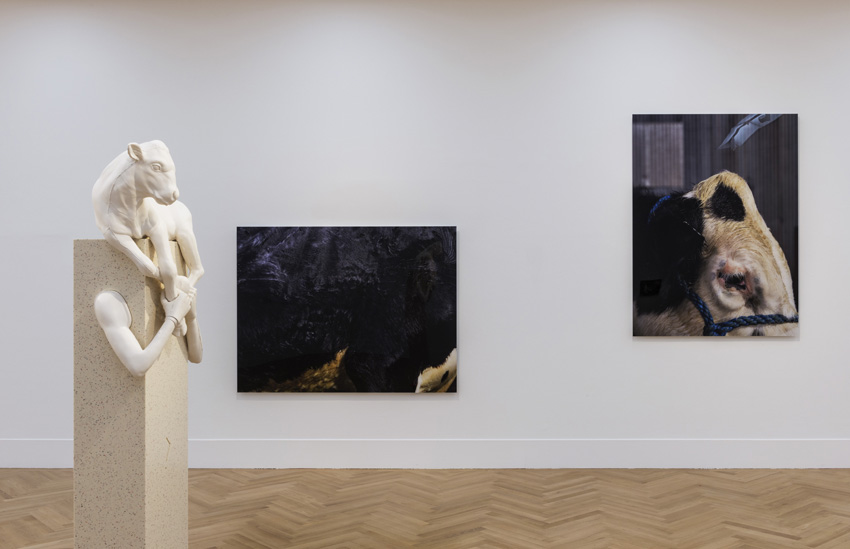 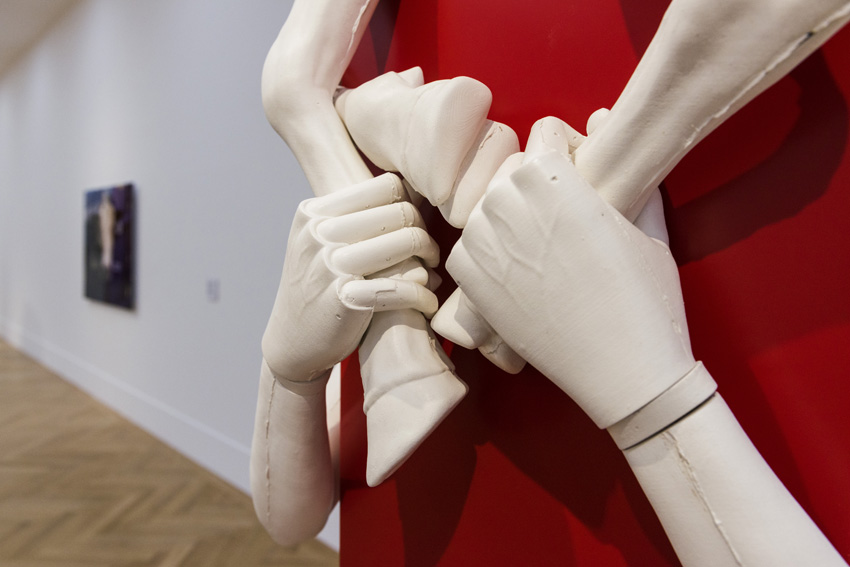 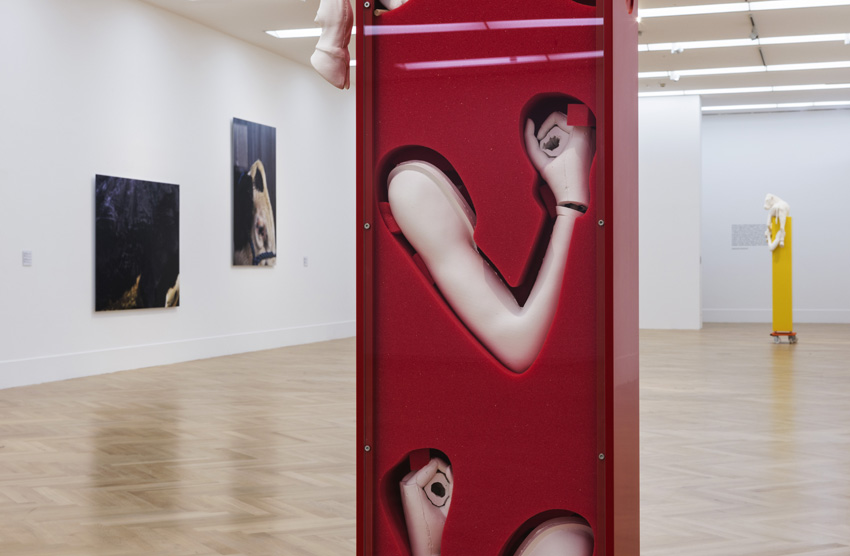 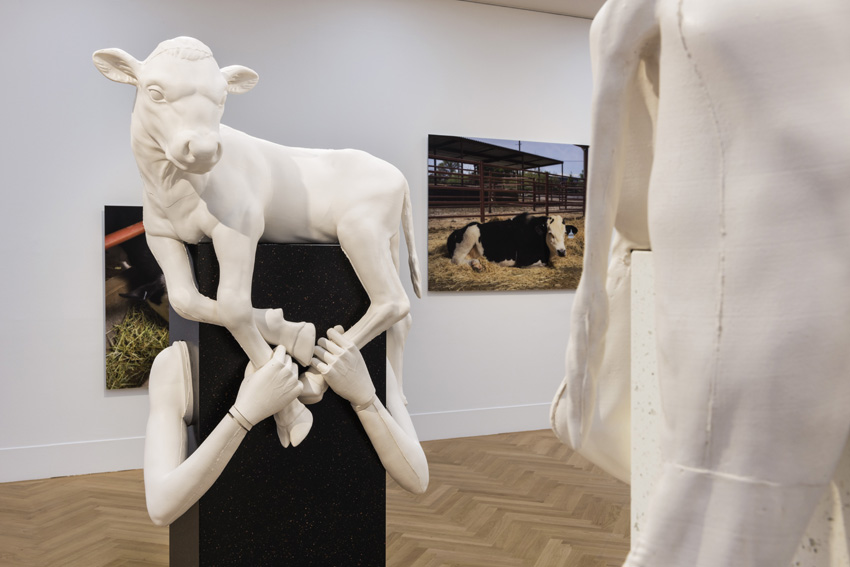 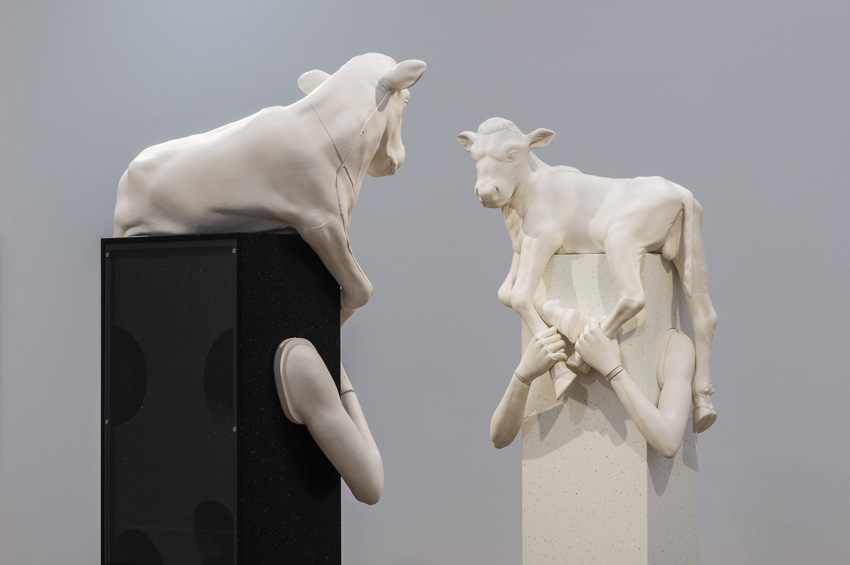 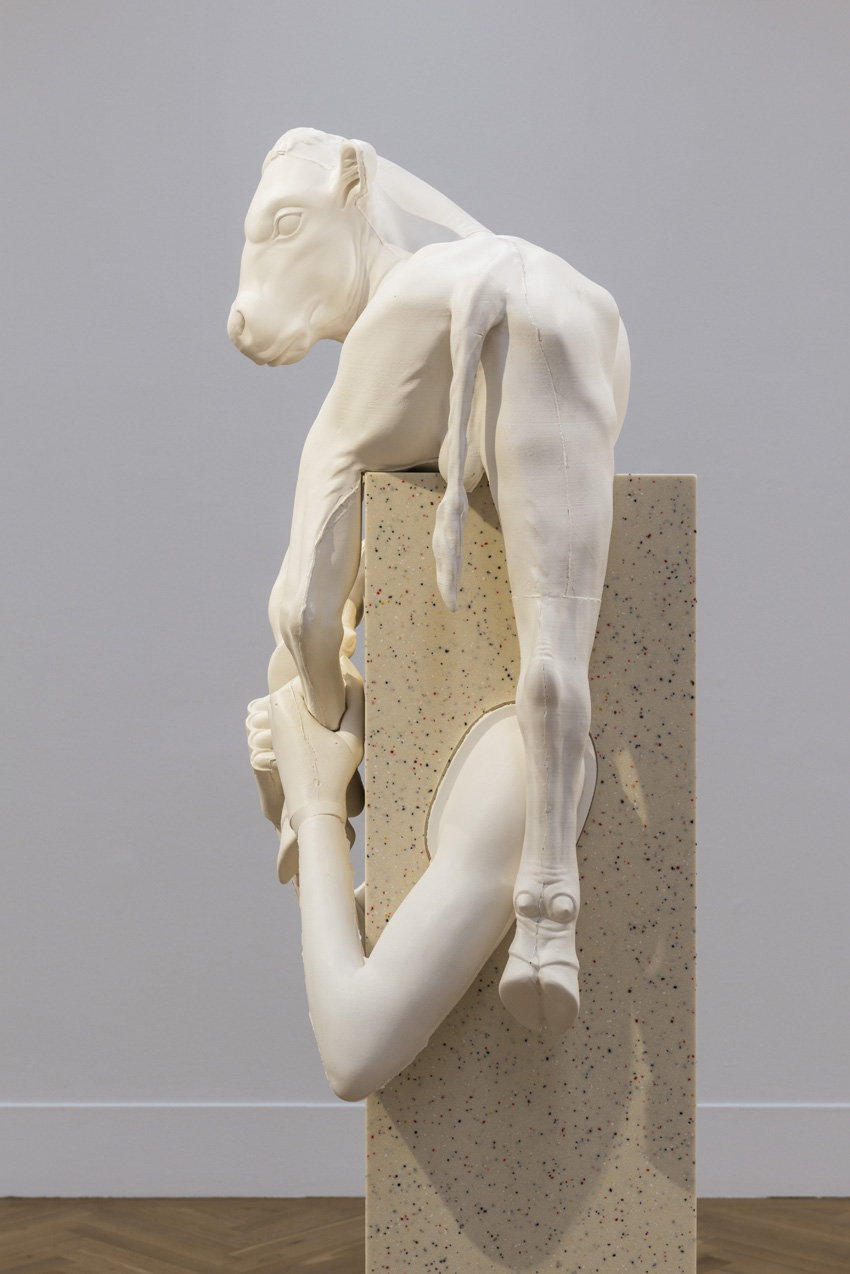 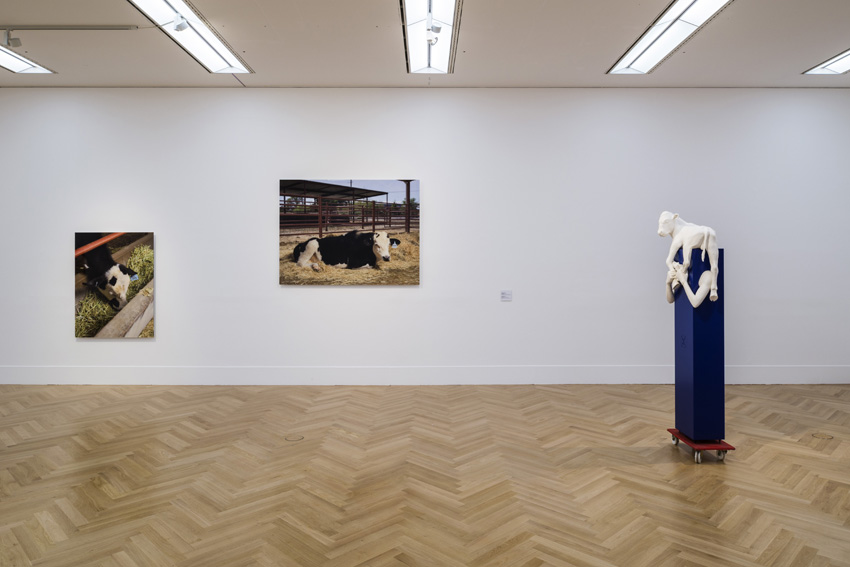 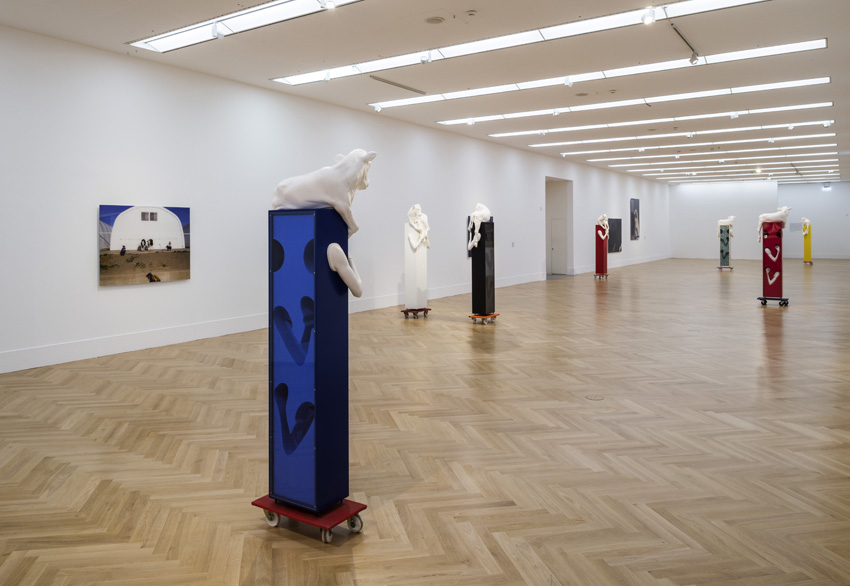 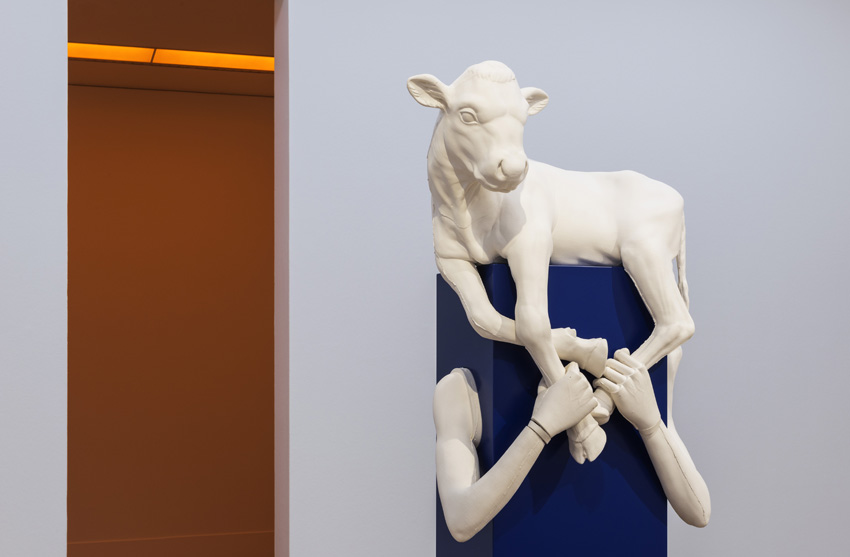 Courtesy of the artist; Bundeskunsthalle, Bonn; and Tanya Leighton, Berlin