Camille Picquot’s work is situated at the intersection of the visible and the invisible, where reality and imagination meet. Through series of photos and films, she plays with the dynamics between fiction and documentary. She intertwines the two, creating a story in which you never know what is true and what is not.

Picquot presents her photos in series that gradually develop from photographic experiments, spontaneous snapshots, staged images, and as a reflection on the text she writes about and with these images. It is difficult to conceptualise the development of these series. Some of her images arise autonomously while others are carefully constructed. It is only after there is a large number of images that Picquot brings them together. Then she rethinks what the images mean, how they form a whole, and what is missing from that whole.

Picquot herself describes her practice as a centripetal force. Some artists start very small and then work towards a larger whole; Picquot works in the opposite direction: she begins very broadly and then gradually zooms in until only a few images remain as a series. Some of the images she makes are created without much thought. Other images are made more consciously, but Picquot always leaves room for coincidence. As a result, the viewer feels the tension between the documentary and fictional elements, between the spontaneous and the staged

The images from the series Domestic Flight (2015-2018) are seductive. They are full of details in close-up that help the viewer unravel a story. But we never find out everything, and image after image unfolds a story that will always be a little mysterious.

In Total Ground (2016-2018), Picquot goes one step further. These images were made on line four of the Paris metro, at the busiest time of the day. After months of hanging around and photographing on this metro line, Picquot discovered that there were situations that evoked a certain tension but that were not interesting as images due to light or composition. She then set about re-enacting these situations in the same metro with several actors – so that the formal aspects of the image can echo its content. The actors were controlled in these images, but all the other people in the image did their own thing. When we look at the whole series, it is not clear who the actors are, or which images have been partly reenacted and which have arisen spontaneously.

The tension between the spontaneous and the staged is also important in Camille Picquot’s films. Her film Le Temps Cogne (2016) is an imagined doucmentary about Paco and Raoul. The characters are both 12 years old but live and work like adults. Except for the documentary maker, no one around them seems to find this strange. In her latest, too, we see a similar mix of fiction and documentary. Cao Bang (2022) just premiered at the Rotterdam film festival and has yet to hit the screens in Belgium. The film tells the story of an anonymous man who makes a journey to disappear and reinvent himself. The philosophical text of the voice-over comes from a notebook found on a train in southern China (or at least that is what is told during the film’s prologue).

The image shown as the new Billboard Series is part of Camille Picquot’s latest photographic series entitled Salut Soleit (qui sait mourir) (2011-2021). The title of the series is taken from a poem by the French spiritualist-surrealist René Daumal. The series shows a desire for celebration and physicality and it is the first time that Picquot’s images have such sensuality: they show bodies, skin, and touch. It is also the first time that Picquot gives us an insight into her own life. Previously, there was a strict border between the images the artist made as part of her artistic practice and the images she made as documents of her personal life. As such, Picquot again plays with the boundary between fiction and documentary – you don’t know which image is a snapshot and which is staged. The image on the billboard is called Slumber and shows three naked, sleeping bodies. The image speaks of trust and connection. As a viewer, you feel both a curiosity (who are these people? Why are they lying together like that?) and a longing for security. As always, as a viewer, you are only given details of a broader story – and you do not know what was staged and what was not. Nevertheless, the image invites you to take a seat between the bodies, nestle against them, and embrace the world. 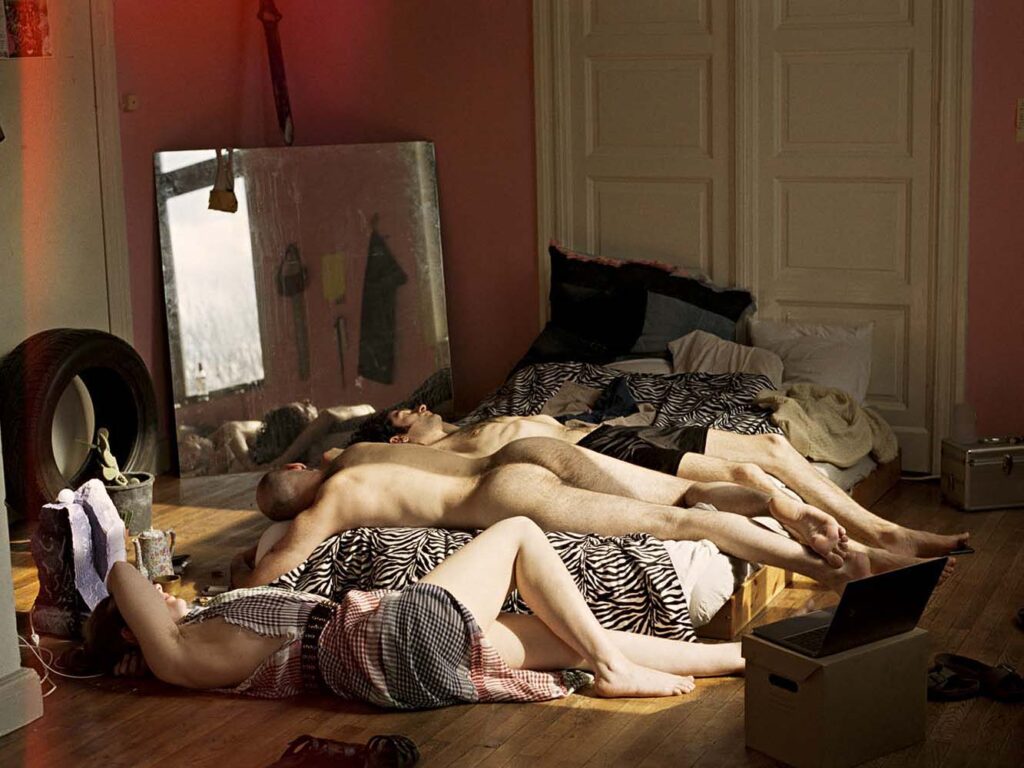