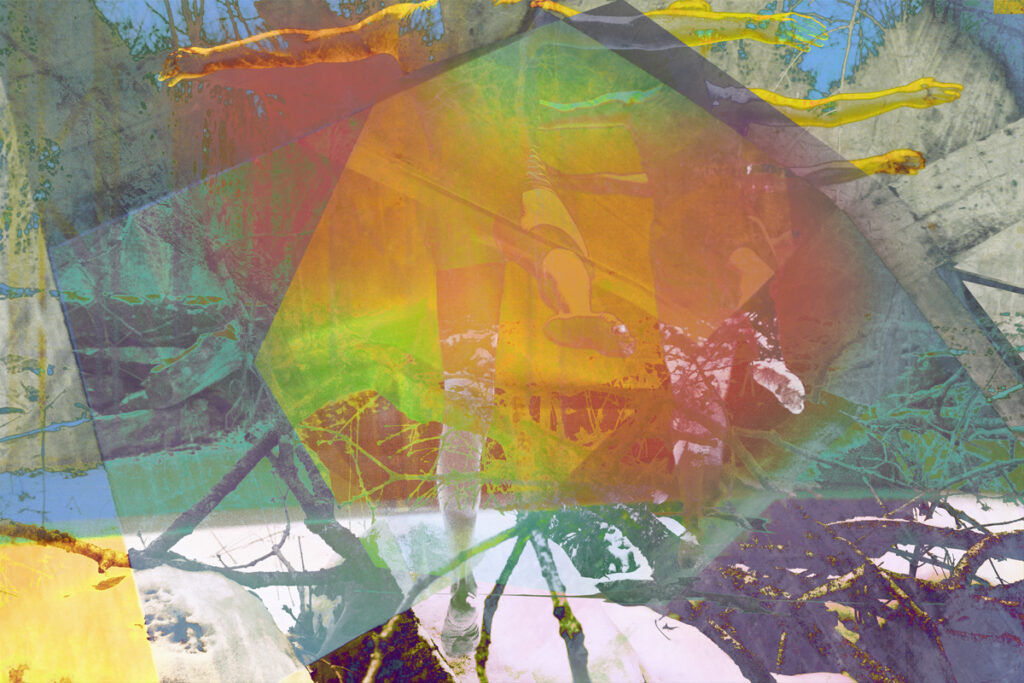 Edition of 66 copies, signed and numbered by the artist

9910 is an image first shown at James Welling’s exhibition Choreograph at Regen Projects, Los Angeles – featuring a series of images that incorporate dance, architecture, and landscape. After seeing the Merce Cunningham Dance Company perform in 1970, Welling studied dance briefly at the University of Pittsburgh. In 1971 he stopped dancing to attend the California Institute of the Arts, where he concentrated on photography. Choreograph marks Welling’s return to dance, albeitthrough photographic imagery. To create the works for this series, Welling photographed over a dozen dance companies in New York, Philadelphia, Ottawa, and Los Angeles. The dance photographs were then mergedwith photographs of architecture (buildings by Frank Lloyd Wright, Marcel Breuer,and Paul Rudolph) and landscape imagery (western Connecticut, southern Florida, and Switzerland) in Photoshop’s fundamental red, green, and blue color channels, which are basic to all color photographs. The resulting electronic files were altered by the artist using Photoshop’s Hue and Saturation layers to create complicated, multi-hued photographs.

James Welling has been questioning the norms of representation since the 1970s. His work centers on an exploration of photography, but refers strongly to the history of American painting. At the same time it connects with the critical, post-modern debates that were current in the Pictures Generation scene in the early 1980s, where concepts of authorship, originality and representation were prominent. In addition to this conceptual basis, emotional states such as melancholy and nostalgia are distinctly present in the work of this artist, who often interweaves biographical elements with the history of photography. Welling’s photographic practice is comparable with that of a “ventriloquist”, as he himself once described it, meaning that he embraces many artistic languages through the filter of photography.

James Welling is represented by the following galleries;
click through to discover more of his work.

You can also discover more of Welling’s work on his own website.