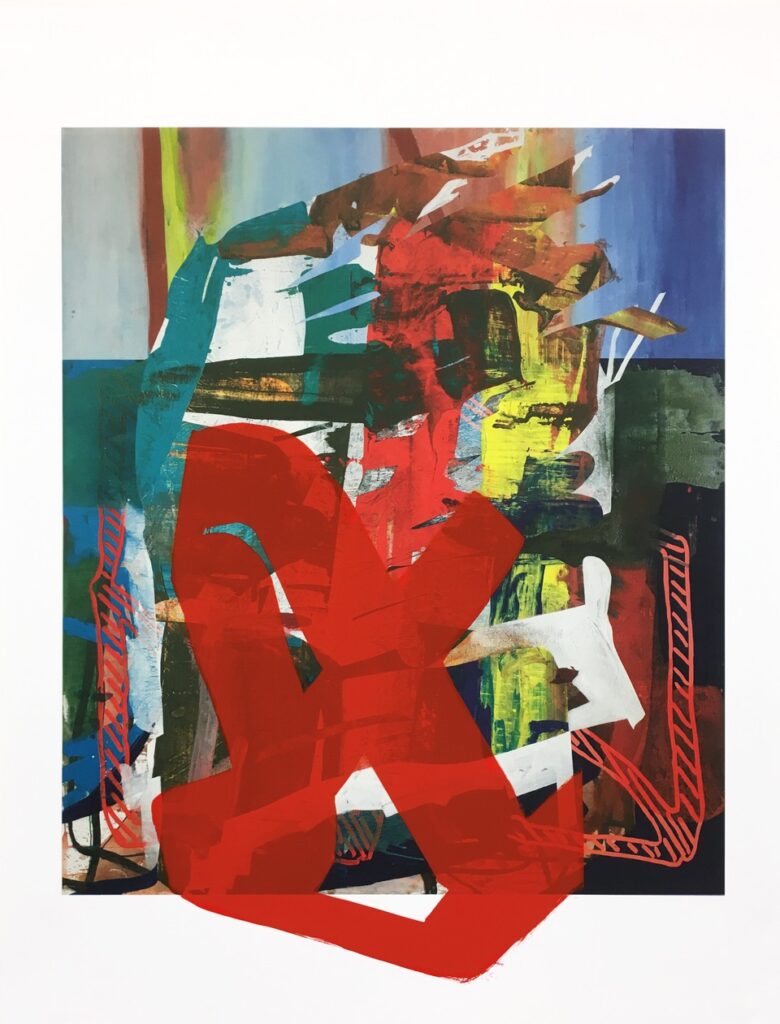 Arturo Herrera is a virtuoso of color and abstraction whose choice of media ranges from wall paintings to works on paper to painted books, among other formats, almost all of which operate in the seemingly infinitesimal microlayers of the two-dimensional. The flatness of his chosen supports offers Herrera a site for carving and cutting into spaces, building, and re-building, in lyrical friezes packed with energetic contours and silhouettes. The tension within each of his compositions is staggering: a palimpsest of outlines and colored configurations that pulsate with life, vibrating in unison like the multiple sections of a well-tuned orchestra.

For this edition, Herrera created an offset print from one of his large-scale paintings with his trademark weave of lines, colors, and open structures. Over the offset print, he then silkscreened a large red form in gouache, which sits playfully atop the frenzied composition that is the picture’s ground, echoing its restless grammar of lines and outlines and providing another plane that reflects it. Here, Herrera deftly positions the two-dimensional image as both surface and support, making both identities equally alive and urgent.

Using techniques of fragmentation, splicing, and re-contextualization, Herrera’s work is provocative and open-ended. For his collages, he uses found images from cartoons, coloring books, and fairy tales, combining fragments of Disney-like characters with violent and sexual imagery to make work that borders between figuration and abstraction and subverts the innocence of cartoon referents with a darker psychology. In his felt works, he cuts shapes from a piece of felt and pins the felt to the wall so that it hangs as a tangled form, resembling the drips and splatters of a Jackson Pollock painting. Herrera’s wall paintings also meld recognizable imagery with abstraction, but on an environmental scale that he compares to the qualities of dance and music.

Arturo Herrera is represented by the following galleries;
click through to discover more of his work.

You can also discover more of Herrera’s work on his own website.