Last weekend the Venice Biennale opened its doors to the public. One of the most important events in the art world, the city-wide exhibition runs from 13 May through 26 November, leaving you plenty of time to visit.

This will be our longest journal post so far, introducing you to the web of pavilions, exhibitions and palazzo’s scattered across the greeneries of Il Giardini, the medieval dockyard Arsenale and the countless little streets and bridges making up Venice. We’ll first post these highlights in separate chapters – Il Giardini first, then Arsenale, and lastly Around The City. To end, we’ll string these chapters together to create one ultimate guide to this year’s La Biennale di Venezia.

Let’s start of with our favourite National Pavilions around Il Giardini. These gardens in the east of Venice have been the traditional venue for the International Art Exhibition since 1895. They were laid out during the Napoleonic era, on land that had once been occupied by a district that included four churches and three convents. The area hosts the Central Pavilion and a further 29 national pavilions, built at various periods by the participating countries themselves. 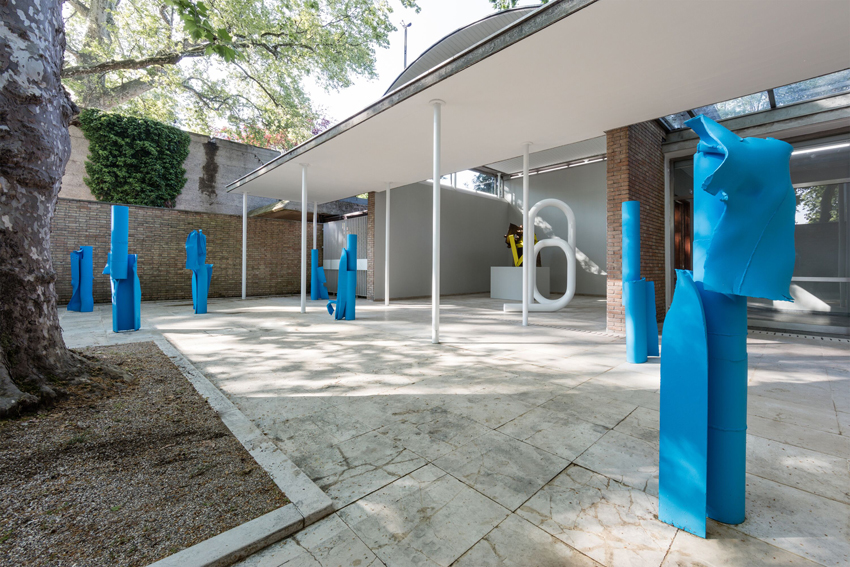 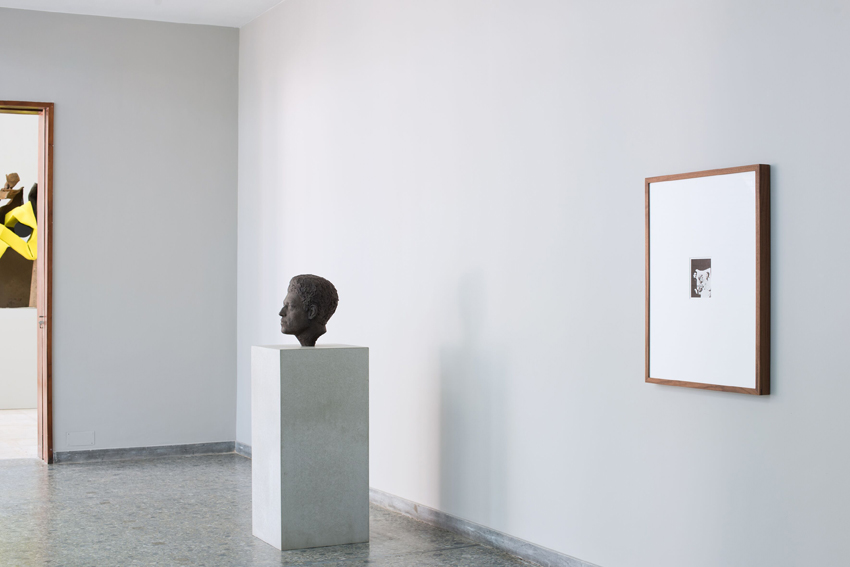 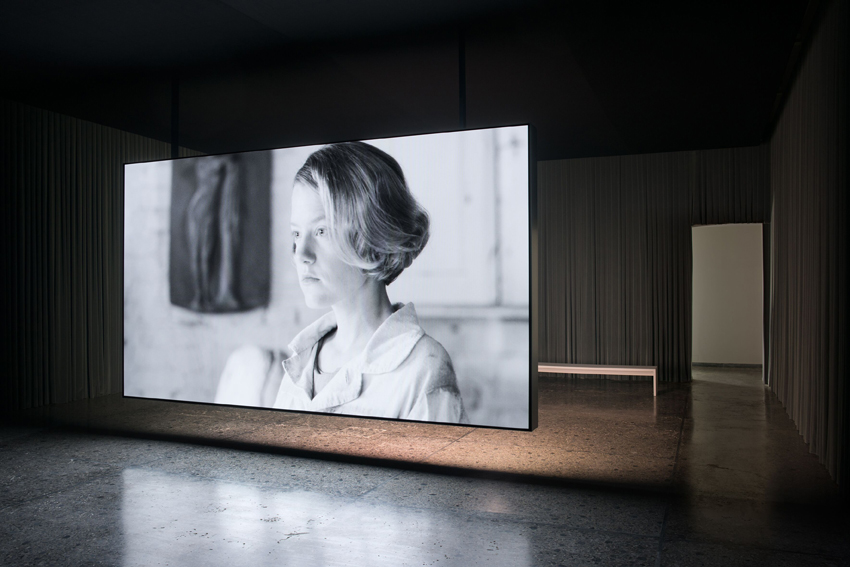 Central to this year’s exhibition at the Swiss Pavilion is an absence – that of the great Swiss artist Alberto Giacometti. It’s a little-known fact that during his lifetime he refused to represent his native country by exhibiting at the Swiss Pavilion, that had been build by his brother Bruno in 1952. Living in Paris, Giacometti considered himself an international or transnational artist and rejected being monopolised by one nation. This late modernist, post-national utopian vision formed the starting point of this year’s exhibition Women of Venice – for which both Carole Bove and Teresa Hubbard / Alexander Birchler produced new, autonomous works.

Carole Bove takes Giacometti’s constellations of figures and late figurative work (Femmes de Venise) as a starting point for a new sculptural group taking over the pavilion’s courtyard and sculpture hall. The Swiss-American Teresa Hubbard / Alexander Birchler present Flora, a new film installation focussing on Giacometti’s love affair with the American artist Flora Mayo, with whom he studied in Paris in the 1920s. The film allows a key figure from Giacometti’s early life – long eliminated by art history – to move from the perifery to the center.

Anne Imhof at the German Pavilion 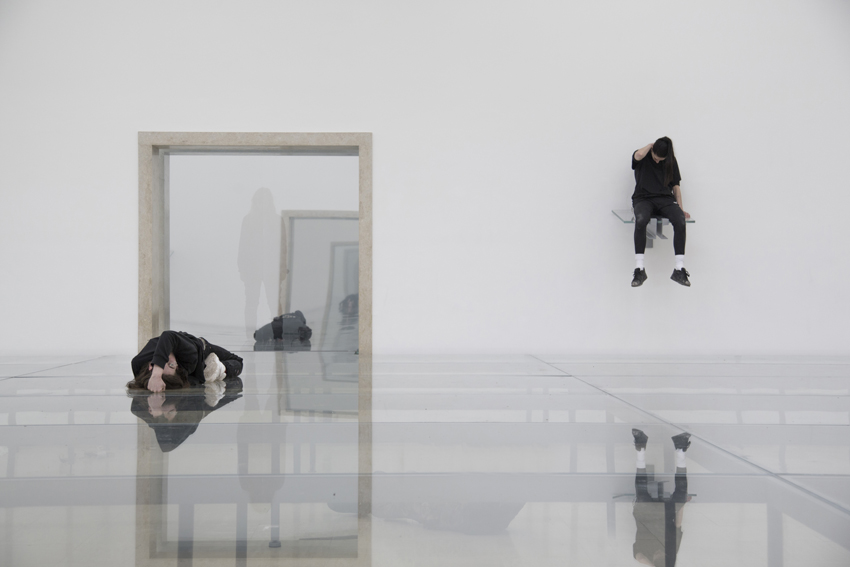 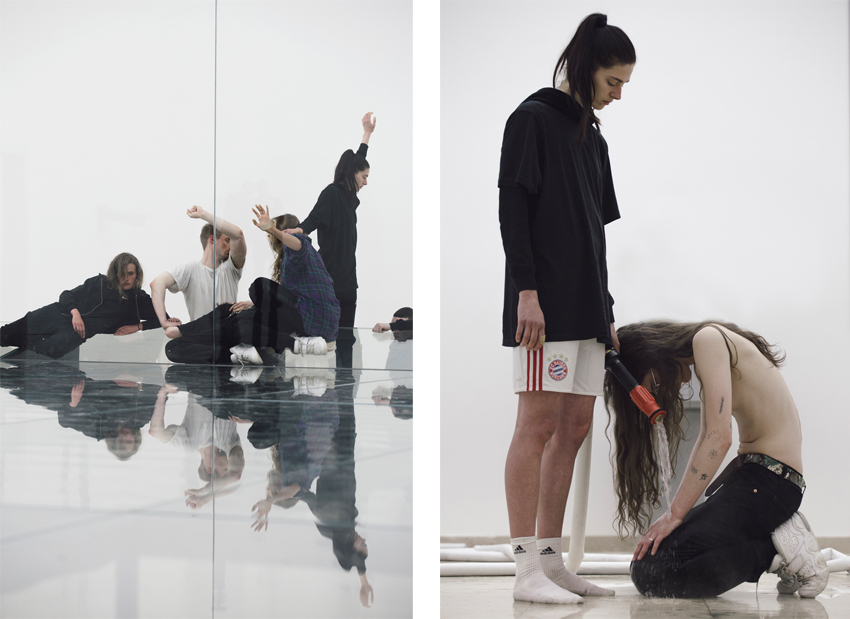 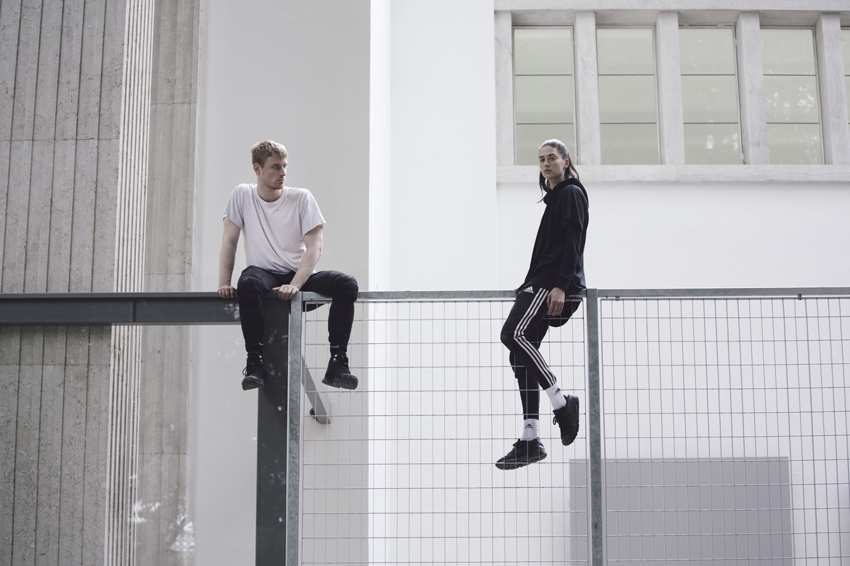 The German pavilion was probably the most anticipated one of this year’s Biennale. Anne Imhof, this year’s representative for Germany, shot to popular acclaim after winning the Preis der Nationalgalerie in 2015 and presenting her three part opera Angst in Basel, Berlin and Montréal the following year. It comes as no surprise the German pavilion drew the longest cues during the opening preview, and Anne Imhof was widely expected to win this year’s Golden Lion for Best National Participation – which she did.

In a sculptural setting designed specifically for the space and the occasion – including threatening Dobermans behind a fence, an elevated glass floor, a safety harness-equipped mezzanine and glass partitions as temporary walls – Anne Imhof and her team present Faust, both a five-hour production and a seven-month-long scenario comprised of performative dynamics, sculptural installations, painterly touches, and rigorously choreographed visual axes and movements that encompass the entire pavilion.

Geoffrey Farmer at the Canadian Pavilion 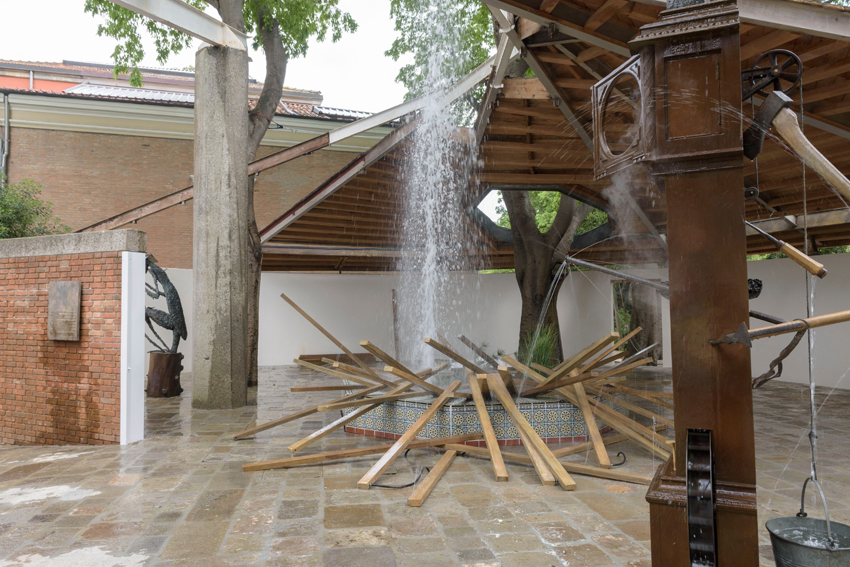 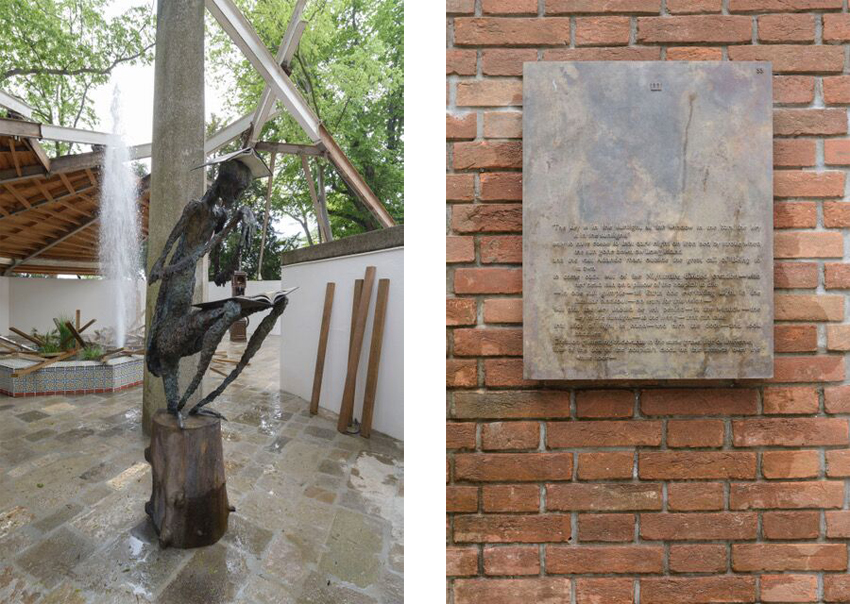 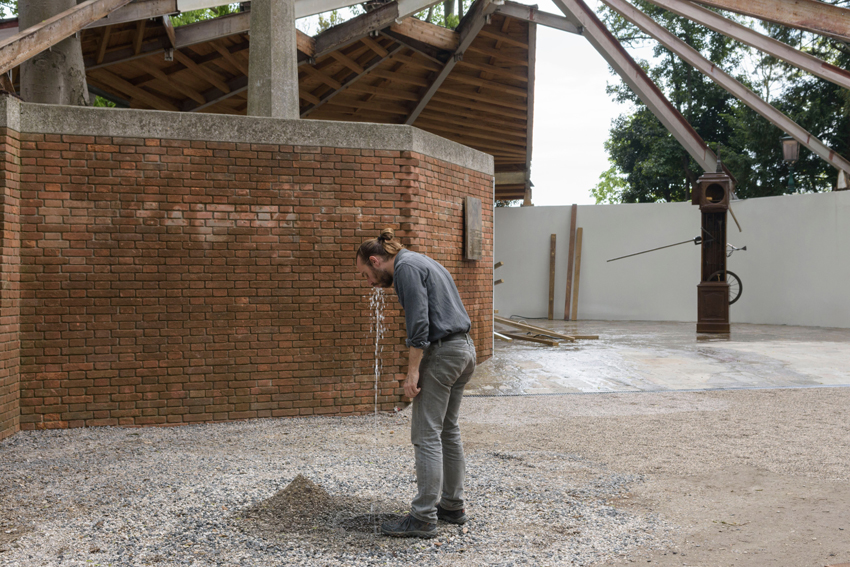 Geoffrey Farmer – A way out of the mirror, 2017.
Installation view at the Canada Pavilion for the 57th International Art Exhibition – la Biennale di Venezia, 2017. © Geoffrey Farmer, Courtesy of the artist. Photo : Francesco Barasciutti

Moving away from his much acclaimed signature style (remember his meticulously staged cut-outs at Documenta 13), Geoffrey Farmer’s presentation at the Canadian pavilion is – at first glance – nothing more then a number of fountains in the rubble of what once used to be the pavilion. Titled to reference the emotive writings of beat poet Allen Ginsberg, A way out of the mirror presents a new way of experiencing the Canada Pavilion, in which the architectural history of the building is entwined with the installation itself.

A way out of the mirror began with Farmer’s discovery of two unpublished press photographs dating back to 1955 that depict a collision between a train and a lumber truck driven by his paternal grandfather. 71 brass planks, reminiscent of the lumber that was scattered at the scene of the accident, are part of the work. Other elements, including 3D-printed sculptures cast in aluminum and bronze, tell stories ranging from the relations between Italy and Canada after the Second World War to the artist’s own familial trauma, of luminaries Kathy Acker and Allen Ginsberg, and of Inuit teenagers residing in Cape Dorset, Nunavut.

All elements from these stories are connected by water, linking imagery to the flow of liquid, from the “fountain of knowledge” to the constant “livestream of images” we are familiar with today. Curator Kitty Scott puts it like this: “Farmer opens up and transforms the Canada Pavilion into an outwardly facing fountain courtyard: the water of Away out of the mirror translates a surfeit of emotion and discharges it in spurts and drips as tears, ejaculate and sweat. It is at once a monument and an anti-monument that memorialises individuals and stories in a gesture of generosity and inclusion.” 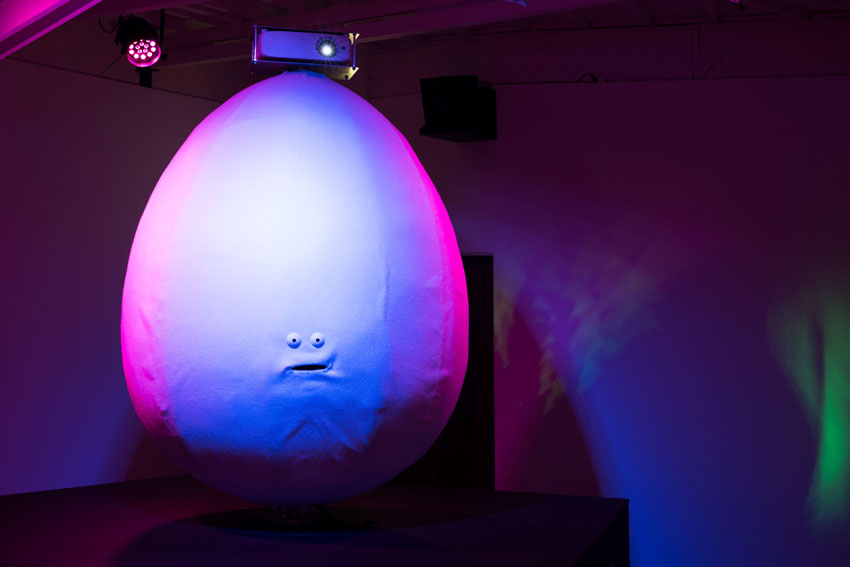 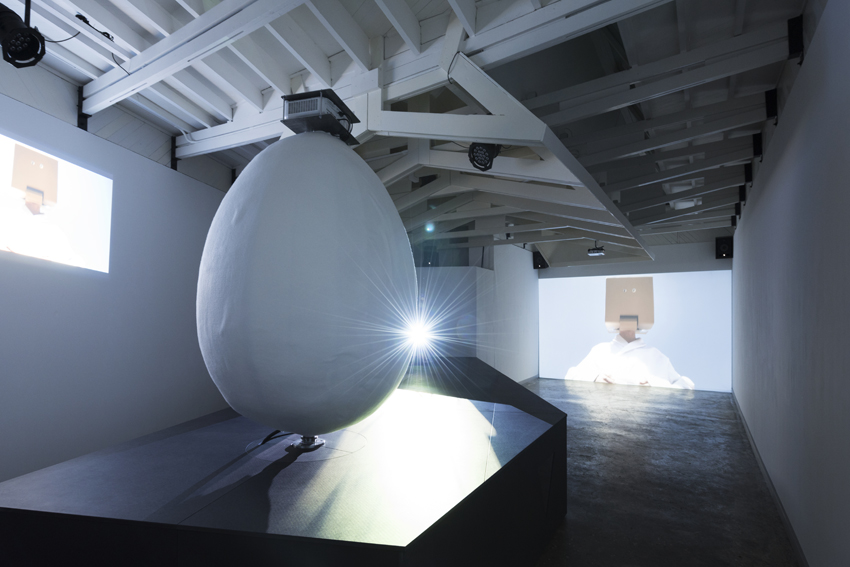 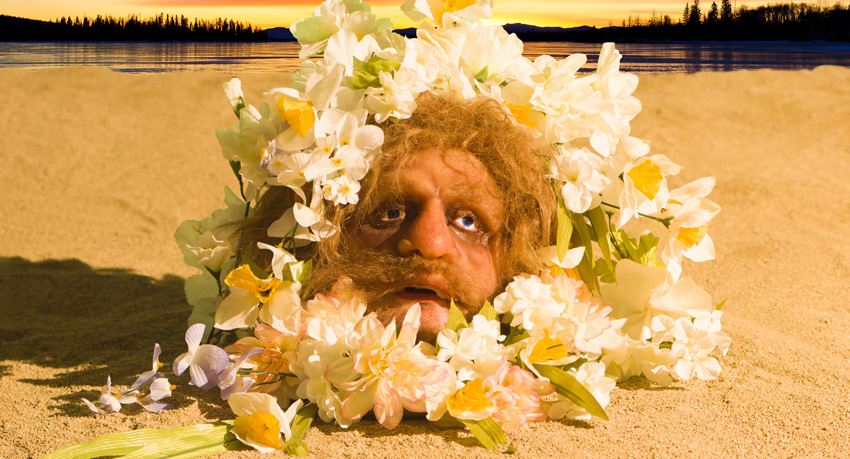 Artists Erkka Nissinen and Nathaniel Mellors had been long-time admirers of each other’s work, but The Aalto Natives is their first collaboration – an installation with video and animatronic sculptures exploring themes such as nationalism, xenophobia, bureaucracy and intolerance by way of absurdist satire.

The work re-imagines Finnish society through the eyes of two messianic outside figures, Geb & Atum, who are being represented by talking animatronic puppets. They are engaged in a dialogue touching on subjects such as Finnish creation mythology, contemporary Finnish society and their vision for the future of Finland. The story presents Geb & Atum as terraforming higher beings who re-visit the Finland they created millions od years earlier, and who try to make sense of the culture that has developed  in the meantime. The talking animatronic puppets have projectors strapped to their head, by which they illustrate their conversation and activate the space of the Aalto Pavilion, combining various visual idioms such as  3D CGI, old school Muppet-style puppeteering, and hand-drawn stop-motion animation.

Dirk Braeckman at the Belgian Pavilion 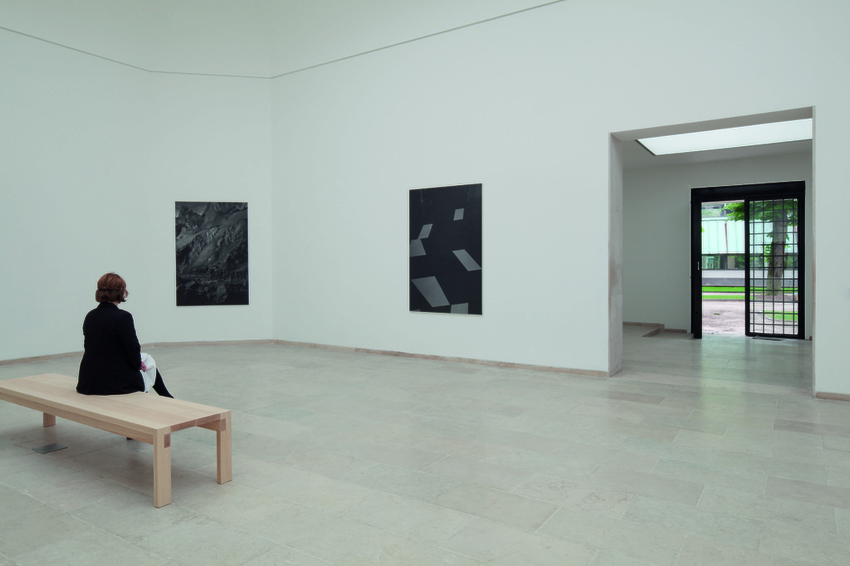 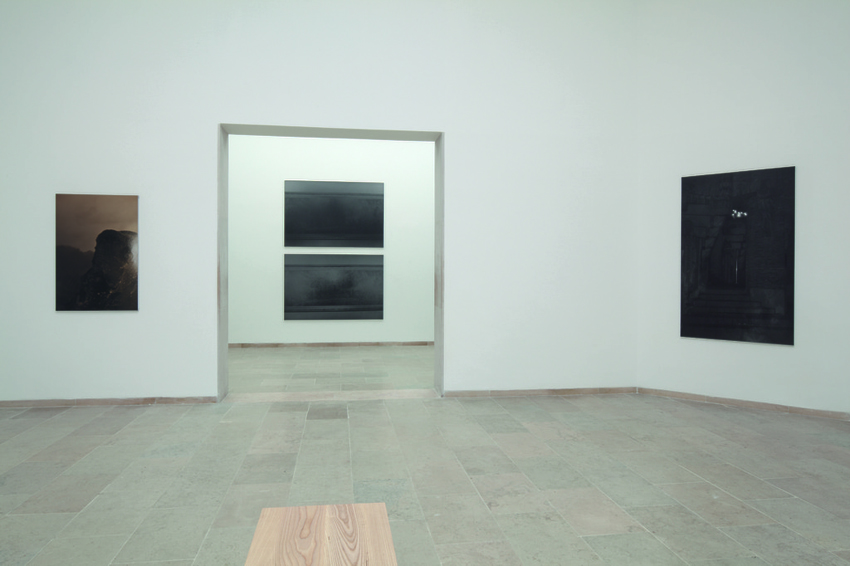 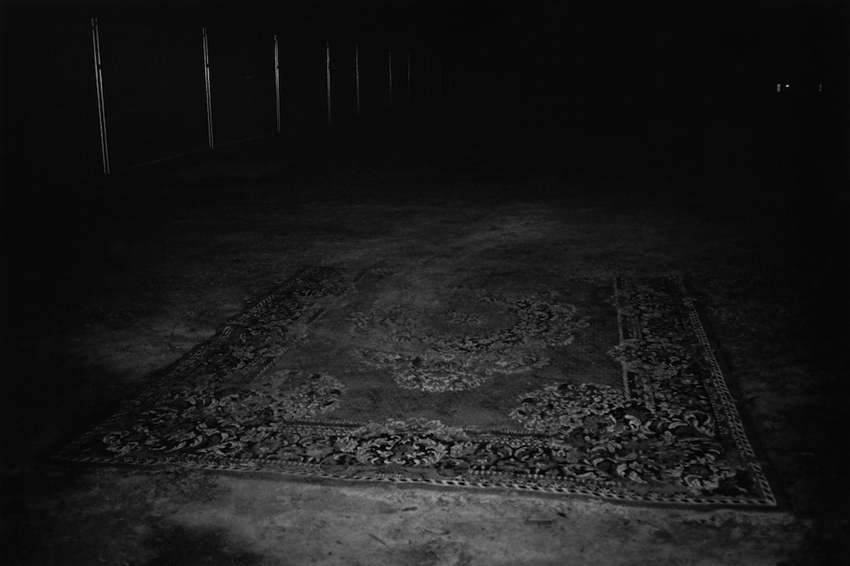 We’re of course a bit biased when it comes to Dirk Braeckman’s Belgian Pavilion. Nevertheless we were svery impressed by his presentation. While a lot of pavilions around Il Giardini are buzzing with activity or are showing big gestures, the Belgian Pavilion is a quiet retreat in itself – a silent standstill that brings us back to the core of photography: the act of looking.

Dirk Braeckman’s photographs bring a stillness to today’s constant flow of images. Using analogue techniques, he has developed a visual language that focuses on viewing and reflects on the status of the image. Braeckman explores the boundaries of his medium, and challenges artistic conventions. The camera’s flash reflects off the surface of the subject, the texture of walls, curtains, carpets and posters. His images show anonymous subjects from his immediate surroundings, evoking an open story. The artist shows empty rooms in which time seems to stand still, elements of interchangeable interiors or human figures that stand only for presence – all separate from any specific identity, place, time or emotion. 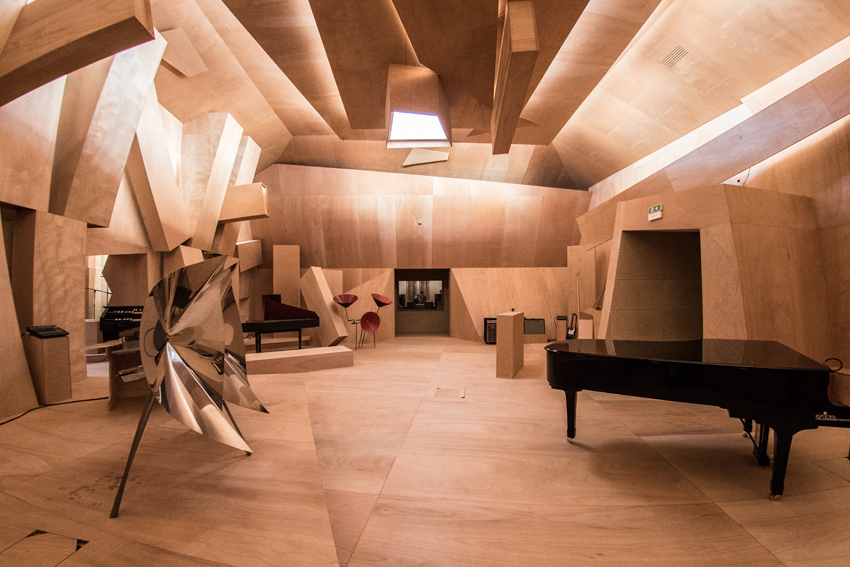 There’s of course plenty more to see in Il Giardini, with its 29 National Pavilions and its Central Pavilion showing part of the exhibition VIVA ARTE VIVA, curated by this years curator of the Biennale Christine Macel – who is also the chief curator of the Centre Pompidou, Paris. Be sure to also pass by the Romanian pavilion where there’s a mini retrospective of the work of Geta Bratescu; the Austrian pavilion where Erwin Wurm shows a selection of One Minute Sculptures; and the French pavilion which is transformed by Xavier Veilhan – together with curators Christian Marclay & Lionel Bovier – in a immersive musical installation in which professional musicians play throughout the duration of the exhibition. In Christine Macel’s curated exhibition (read more about it in our second part about Arsenale) at the central pavilion, you shouldn’t miss videos by Taus Makhacheva, Agnieszka Polska, and Rachel Rose, and the installation of Andy Hope 1930.

COLLECT ART BY THESE ARTISTS 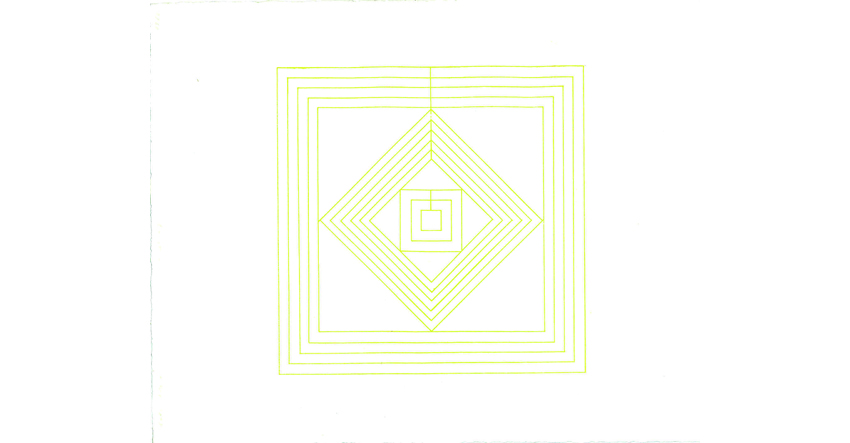 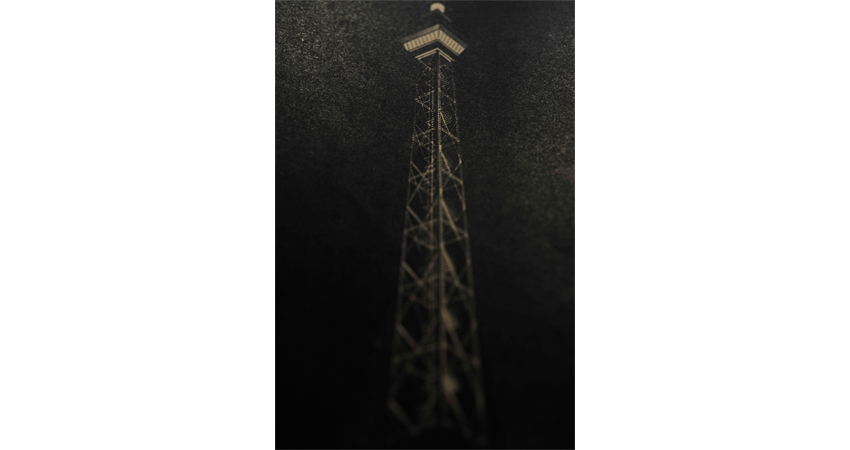