Shana Moulton:
Every Cell is a Bell at Kunsthaus Glarus 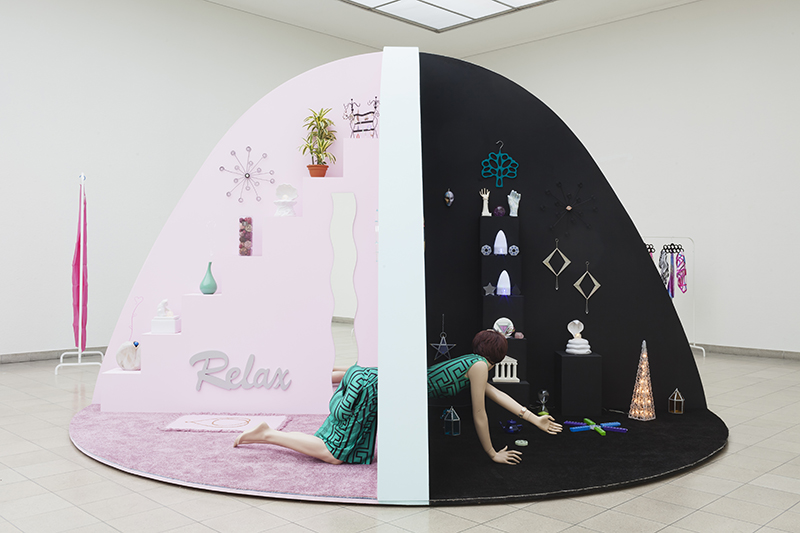 The need for self-optimization and the resulting interdependencies between promises of salvation of specific consumer culture and the “belief forms” of today – for instance esoteric movements or New Age spiritualism – serve as starting points for the work of the Shana Moulton. Products from the wellness, health and beauty sector that are geared toward female consumers in particular, but also decorative and utility items from the household aisle act as protagonists and extras for her narrative videos and installations in which she herself appears as a character. In her ongoing series Whispering Pines, started in 2002, the artist portrays the naïve, hypochondriac housewife Cynthia, who is the alter ego of the artist. In her videos, Moulton navigates a psychedelic universe of self-healing gadgets and products that have sprung to life. Moulton’s imagery employs cheap video effects and the ever-visible use of green-screen technology, recalling both do-it-yourself home videos and the seductive and soothing language of advertising or music videos. The repetitive and hallucinatory images, as well as the ongoing, serial, clip-like narrative flow, also reference the world of American television and film, such as the Disney-extravaganza Fantasia (1940), which first became popular only years after it was made together with mind-altering drug experiences, or David Lynch’s legendary TV-series Twin Peaks (1990).

Organization systems for the mind and body, for matters of material and spiritual interests, for knickknacks, accessories and colorful scarves are at the center point of the exhibition Every Cell Is a Bell. The optimization of these dualities physically and psychically is the religion of the present. New Age movements, fit-for-TV esotericism and health craze promote these ideas into consumable commodities in the form of objects, of the kind that mutate into animistic figures in Shana Moulton’s videos. The colorful, schematic legs dancing out of medical packaging inserts, medical gloves rising up out of screens with ergonomic keyboards attached to them, and a “MindPlace ThoughtStream Biofeedback Performancesystem”, home-based technology for regulating inner relaxation and personal stress levels. But also in the form of pastel-colored, velvety, organizational aids in plastic for the everyday household use. In Shana Moulton’s work, such functional props, as well as seemingly useless and decorative things, are divorced from their original function and take on a life of their own—not just for relief from physical ailments but also in order to open cheaply ornamented doors to the self. In the exhibition space, these extend into pseudo-homelike settings of an ideal world that is a cross between Ikea-design living, a TV-studio, and a one-dollar store for household items or gifts.

Every Cell Is a Bell becomes a metaphor for the imperative to self-controlc over mental and physical well-being. This wordplay and the title Every Angle Is an Angel are quotes of personal accounts from Journeys Into the Bright World (1978), a book by Marcia Moore who chronicled her mind- and body-altering, therapeutical experiences with the drug ketamine. Shana Moulton’s videos, performances, and installative displays are inspired by these kinds of personal accounts expressed in a metaphorical, cliché-like vocabulary of physically and mentally transcendent drug experiences. In Shana Moulton’s universe of repetitive goods, colors, and symbols, which she is continually adding to, absurd devices, the consuming of hallucinogenic cornflakes, or the alchemistic combining of medicinal liquids are the key to accessing the hidden parts of ourselves, as well as for diversion and gaining inner control. The ambivalence surrounding the uniformity of personal and consumer experience culminate in Moulton’s alter ego Cynthia, whose own miraculous adventures not only satirize American television culture, but also the art historical legacy of a female-influenced tradition of performance featuring the performer’s own body. The artist’s own involvement, of a humorous nature, reflects, not least, the role of the viewer and takes the place of moral finger pointing at this commodified aesthetics of self-awareness and selfoptimization.

Her latest works, Every Angle Is an Angel (2016) and Every Cell Is a Bell (2016), can be seen in the Schneelisaal. The bellshaped TV-studio located in the Oberlichtsaal, around which the protagonists of her two latest films interact, features the video MindPlace ThoughtStream (2014). Unique Boutique (2013), which is shown in the basement space, together with the other two videos in the upper level space, form a cyclic theme. The exhibition is complimented with three older videos as well as the first two episodes of the series Whispering-Pines. 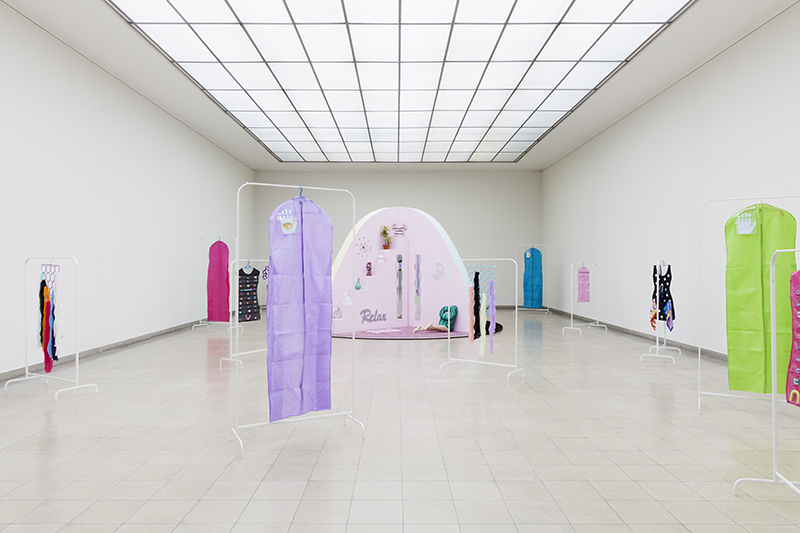 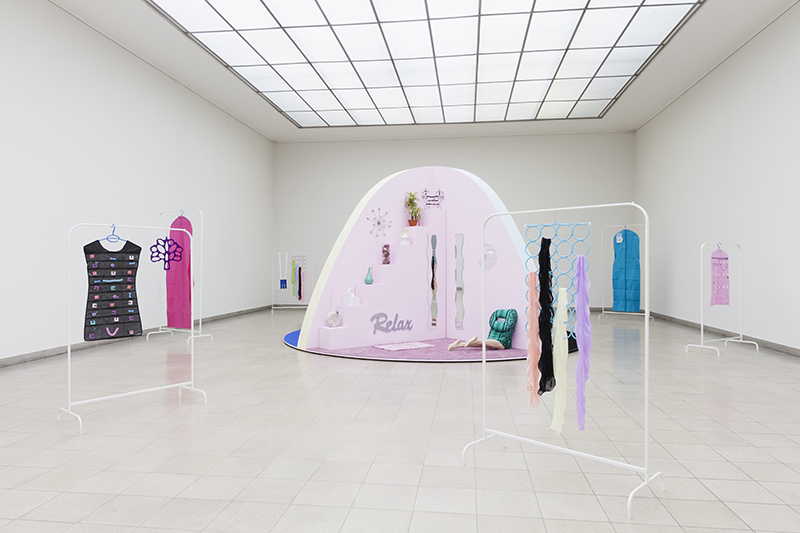 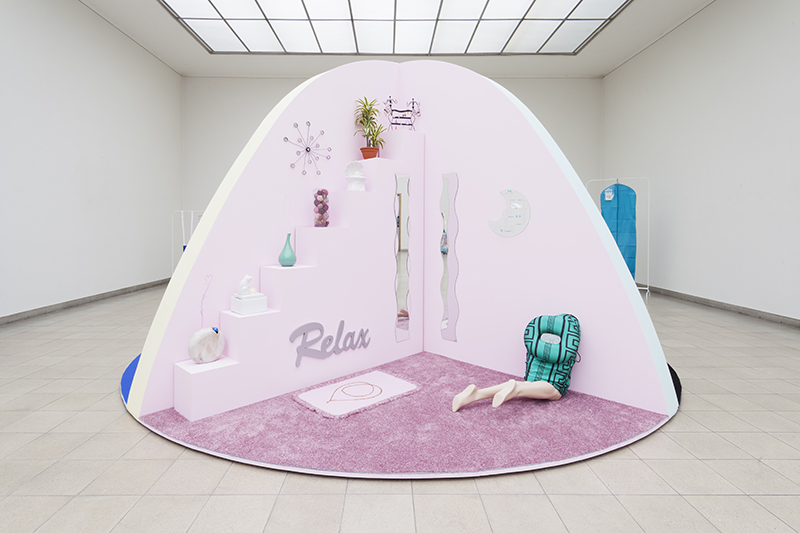 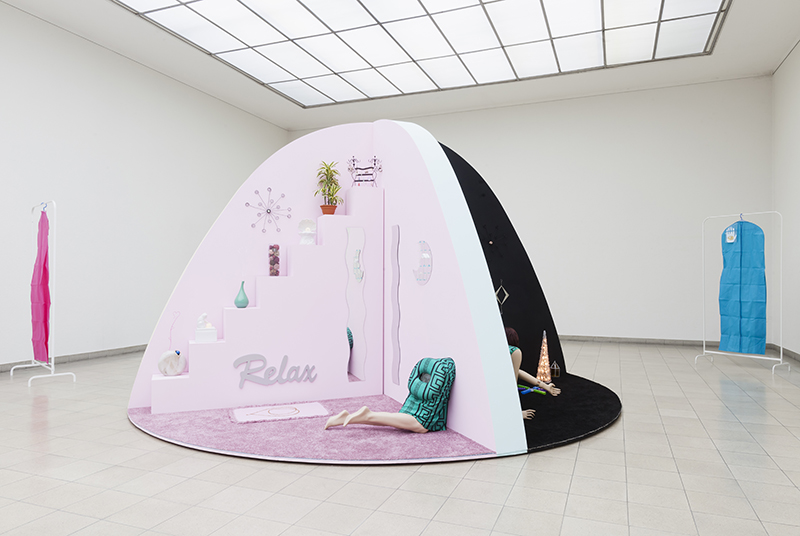 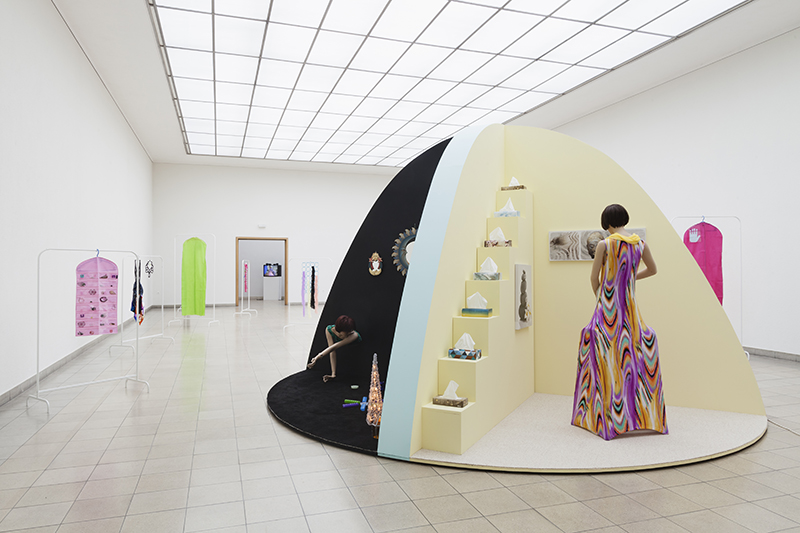 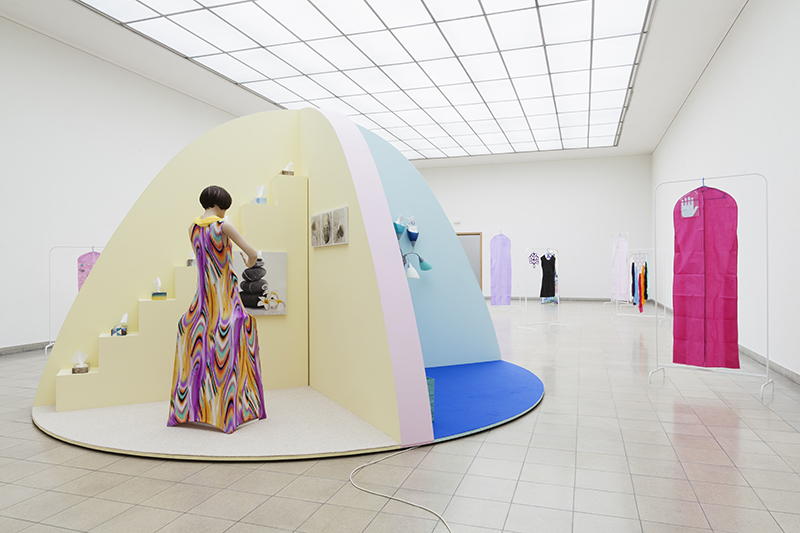 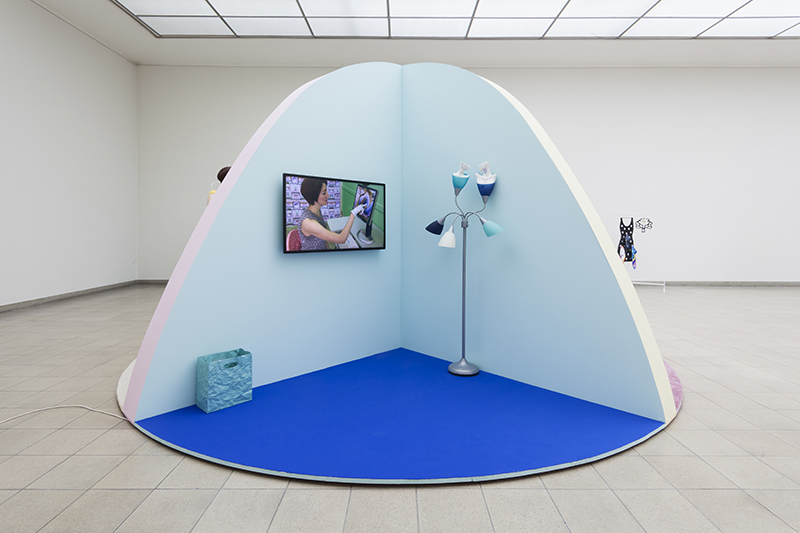 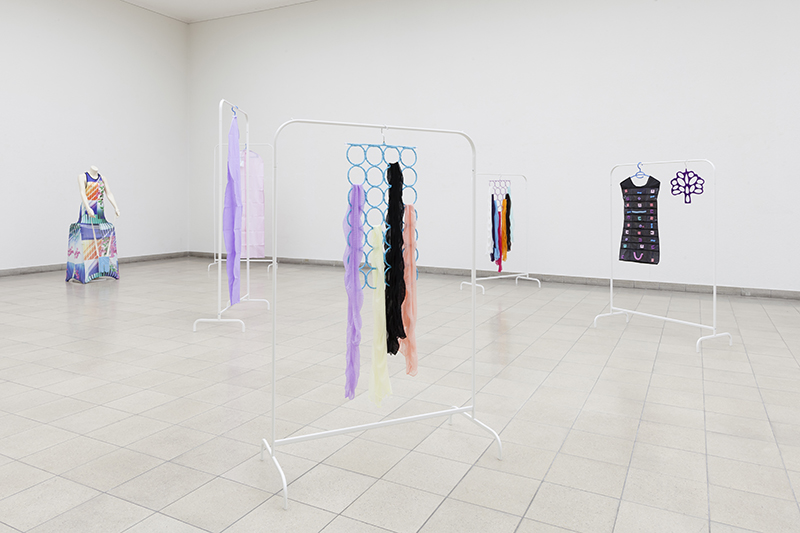 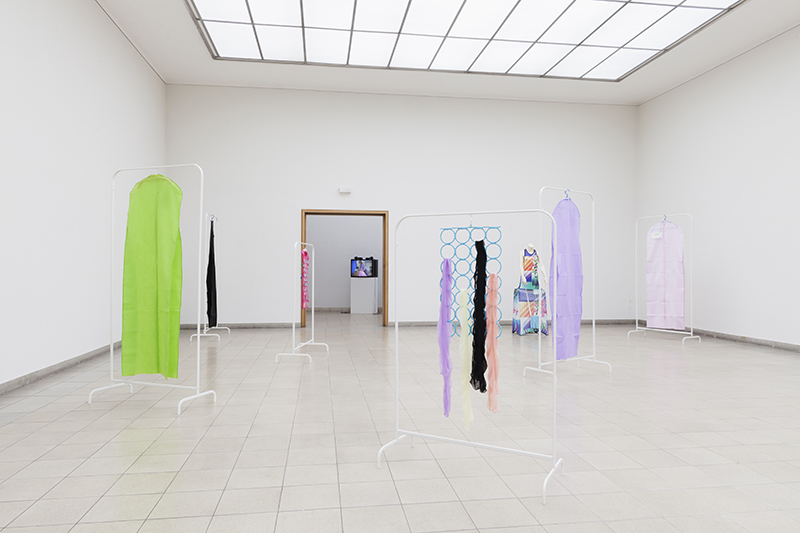 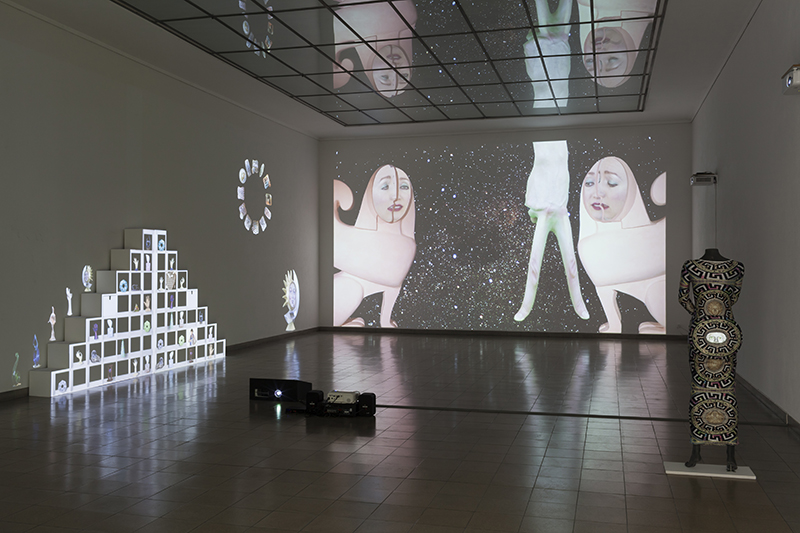 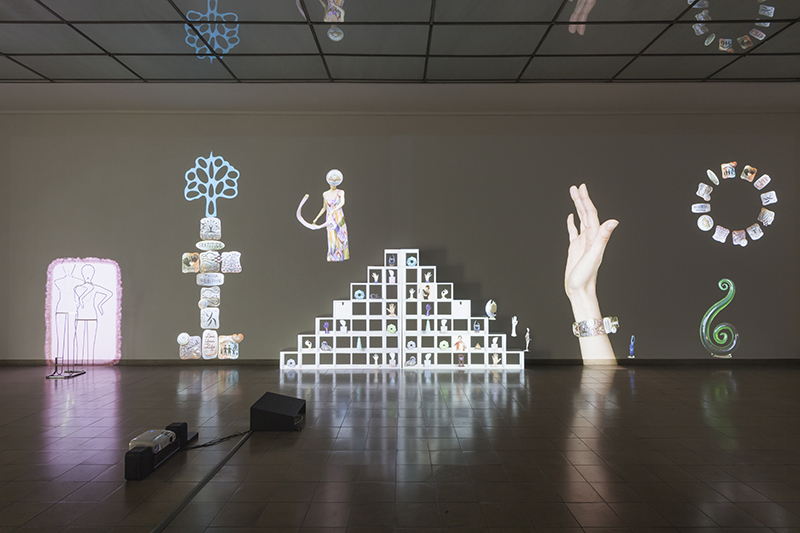 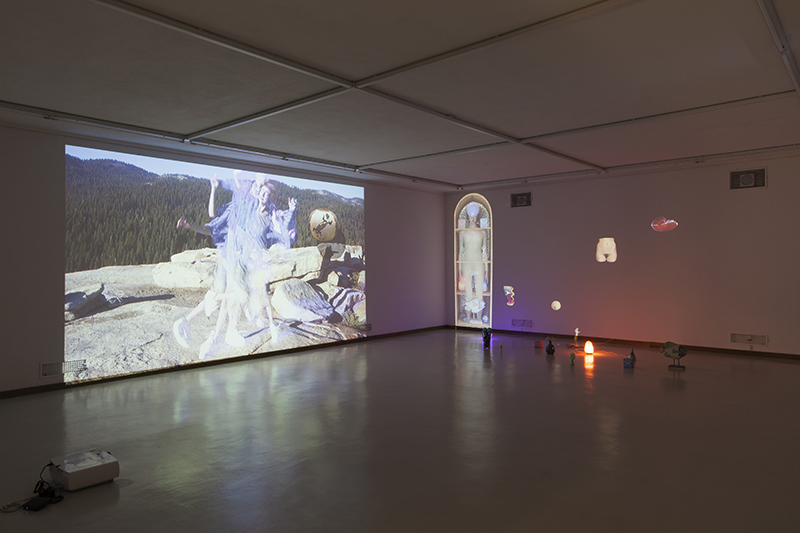 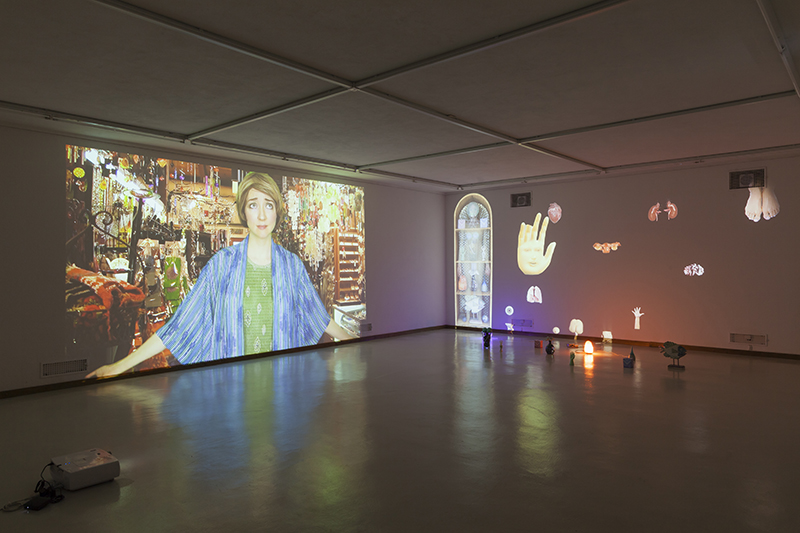 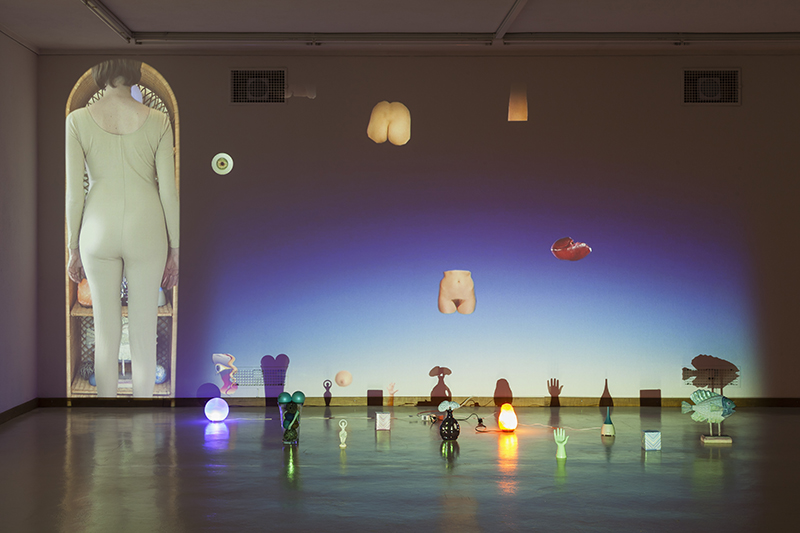 Every Cell Is a Bell