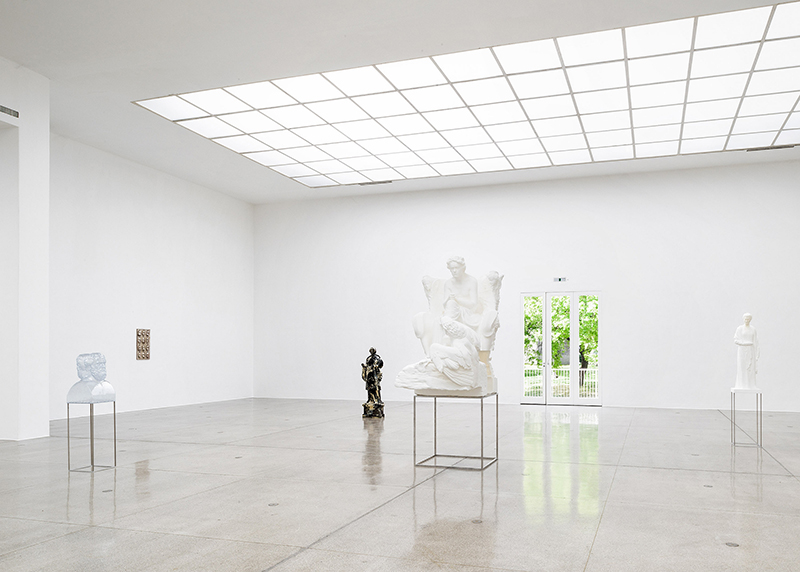 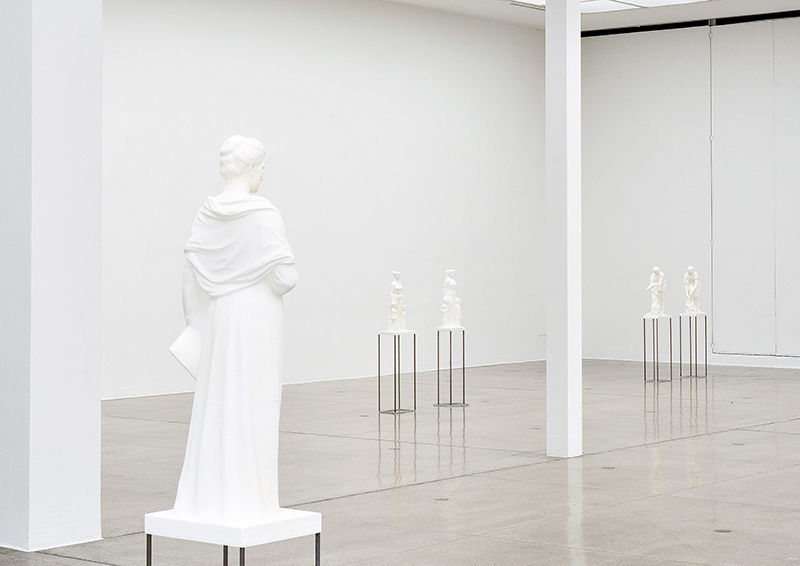 Oliver Laric is a great admirer of glyptotheques and plaster-cast collections, and so his exhibition Photoplastik transforms the Secession’s main hall into a sculpture display. The show assembles his adaptations of works ranging from antiquity to the present, combining them with objects drawn from popular culture and the natural sciences. Designed specifically for the Secession, it consists entirely of new pieces, most of them 3D prints, a technology that has been central to the artist’s work in the past few years. The selection of sculptures may seem baffling at first, but when it is read along lines indicated by the key concepts of form, technology, politics, and law, it unfolds as a narrative about art and technology.

With seeming ease, Laric combines and transfers qualities from the digital domain such as convenient reproducibility, endless variability, and rapid dissemination into physical space. His sculptures are based on scans of works of art and other objects — for this exhibition, he worked in the Kunsthistorisches Museum, the Albertina, the University of Vienna’s Institut für Klassische Archäologie, and various public locations—before subjecting the resulting data to a time-consuming 3D modeling process and preparing them for “printing.” The executed sculptures are merely one of several components that function independently of each other
and together make up the exhibition project. Another, no less vital component consists of the data derived from the sculptures on view in the show and many others, which the artist has released into the public domain and made available for download at threedscans.com. The widely noted project Laric undertook in cooperation with a museum in Lincoln, England, in 2012 (see lincoln3dscans.co.uk) marked the beginning of a larger endeavor: collaborating with a series of prominent museums, Laric has worked to build a publicly accessible 3D archive of works of art and everyday objects. In the past few years, the negotiations over universal access to the objects in their collections in the form of data published for free use and editing have inevitably become an integral part of his artistic practice. His efforts to disseminate art objects held by museums across geographical, social, and cultural boundaries by making 3D data available to an increasingly digital society represent a challenge to many museums; unresolved questions concerning copyright and usage rights further complicate the issue. A recent attempt by the EU to abolish the freedom of panorama—the general right to take and publish photographs of everything located in the public sphere without infringing on any copyright, which is currently the law in some but not all EU member states—is merely a symptom of how the prevailing political and economic systems are overwhelmed by the task of managing today’s rapid technological advances.

Laric’s interest in 3D technologies led him to reflect on his own practice in light of the medium’s origins and foundations. As he explored its history, he discovered widely forgotten nineteenth-century pioneers of the photography-based mechanical reproduction of three-dimensional objects. Preeminent among them was François Willème, who registered a patent in France as early as 1860 that effectively anticipated today’s 3D process. His invention allowed for an unprecedentedly fast and cheap production of sculptures based on photographs. Laric’s research into Willème’s life and work—he toured the cities of Europe with his invention and also worked in Vienna for some time—proved fruitful as he conceived the exhibition not least because examples of so-called photosculpture turned up in the collection of the Albertina: in addition to works by other important artists working in the field such as Willy Selke, H. Poetschke (both Berlin), and Josef Anger & Sons (Vienna), Laric found a self-portrait by Willème that appears in the exhibition in the form of four prints in different sizes on a shared base. The subtle compositional intervention illustrates the two characteristic features of Willème’s invention: the ease with which objects can be reproduced and scaled up or down as desired. The exhibition’s title, meanwhile, refers to a book by the Viennese photography historian Eduard Kuchinka, Die Photoplastik: Herstellung photographischer Skulpturen und Reliefs und ähnliche Verfahren [Photoplastics: The Manufacture of Photographic Sculptures and Reliefs and Similar Processes, 1926], which opens with a discussion of Willème’s work.

The selection of the pieces included in the exhibition demonstrates how Laric intertwines his research into the history and technological basis of 3D printing with artistic, formal, and archaeological interests. His juxtapositions of works that sometimes date from different eras suggests the methodology of art history and specifically recalls the Mnemosyne Atlas of Aby Warburg, whose comparative visual studies traced the afterlife of antiquity and how it influenced European culture. Digital procedures such as “copy and paste” raise the question of authorship, and so Laric—whose early work was often web-based—is especially interested in research that affects how a work of art is read and overturns or corrects entrenched ideas. The dogmatic notion, now widely rejected, that Roman sculptors solely copied Greek models and never produced truly original work, is merely one example.

Hermes Fastening His Sandal, from the collection of plaster casts owned by the Institut für Klassische Archäologie at the University of Vienna, is one such Roman copy after a Greek original. The popular sculpture exists in numerous versions and variants; the figure’s changing poses suggest the way subjective preferences as well as changing fashions and tastes influenced artists’ interpretations of the theme. In the exhibition, it appears next to an eighteenth-century statue from the park of Schönbrunn Palace that represents the Roman nobleman and politician Lucius Quinctius Cincinnatus; unlike Hermes, he is dressed, but the pose is unmistakably the same. Similarly, two public sculptures by Rudolf Schwaiger (1958) and Gertrude Fronius (1959) that represent the theme of the mother with her children are formal twins—the resemblance is uncanny. The statue of Auguste Fickert (1855–1910), a pioneer of the first feminist movement, is one of the few public monuments in Vienna dedicated to a woman. In conjunction with a number of animal figures—so-called “play sculptures”—dating from the 1950s and 1960s, these works of public art offer interesting insights into the cultural politics of Vienna during the postwar economic boom. By contrast, Otto Jarl’s Polar Bear with Seal (1902), which shows the predator on the hunt, recognizably aims for a scientifically informed realism that has little in common with the cuteness of the later animal figures. Even more realistic are the crabs and other crustaceans based on scans of prepared specimens, a reference to the process the late Renaissance artists Wenzel Jamnitzer and Bernard Palissy used to make natural casts. Taken from the collection of Vienna’s Theatermuseum, the foot of Fanny Elßler, a Viennese ballerina, which dates from 1847 and appears in the exhibition as a 3D print, is another life cast (moulage sur nature), as is the only relief on display in the show: an electrotype showing a compilation of twelve life masks of movie actors and actresses.

The statue of Saint Veronica—another work of public art—is the only synthetic resin cast in the exhibition. The black-and-white marbling imitates natural stones; the fused resin layers may be read as a metaphor for the gradual transformation of iconographic traditions. Her attribute, the sudarium of Christ, was also interesting to Laric as an example of the acheiropoíeton or image not made by a human hand. Meanwhile, the Saint Veronica is not the only work in the exhibition in which the artist explicitly addres-ses the question of materials and their symbolic significance. The Youth of Magdalensberg from the Kunsthistorisches Museum in Vienna is too large for a copy to be printed in a single piece, so it was divided into six parts and reassembled in a variety of white and translucent plastics. A spectacular case of provenance research—the figure of a youth was thought to be an original Roman bronze until the 1980s, when a scientific analysis of the metal revealed it to be a Renaissance-era copy—the object was predestined to draw Laric’s attention.

Overlooking the entire ensemble—with a total height of 2.6 meters, he towers above the other works—is Beethoven on his throne. Like the Youth of Magdalensberg, he was far too large for the total printing volume even of industrial 3D printers, necessitating a time-consuming disassembly into multiple compo-nents. Laric translated Max Klinger’s colorful monumental sculpture into a composition of twenty-five all-white 3D printed elements. The artist’s most complex and largest object to date, it is significant in two respects. On the one hand, the original sculpture’s history is inextricably bound up with that of the Secession: Klinger’s Beethoven was presented here in 1902 as part of the legendary XIVth art exhibition, which also occasioned the creation of Gustav Klimt’sBeethoven Frieze, now permanently installed at the Secession. On the other hand, it is regarded as the first modernist polychromatic sculpture, directly inspired by the colors of Greek statuary art. Laric’s work is also a spectacular technical achievement: it is based not on a 3D scan but on a 3D model produced “manually” after photographs of the original.

Two small interventions round out the complex project: for the duration of the exhibition, the general ban on photography in the Beethoven Frieze gallery is lifted, and alert visitors will notice the highly detailed miniature copy of the Beethoven statue from the main gallery in the model of the 1902 Beethoven exhibition. 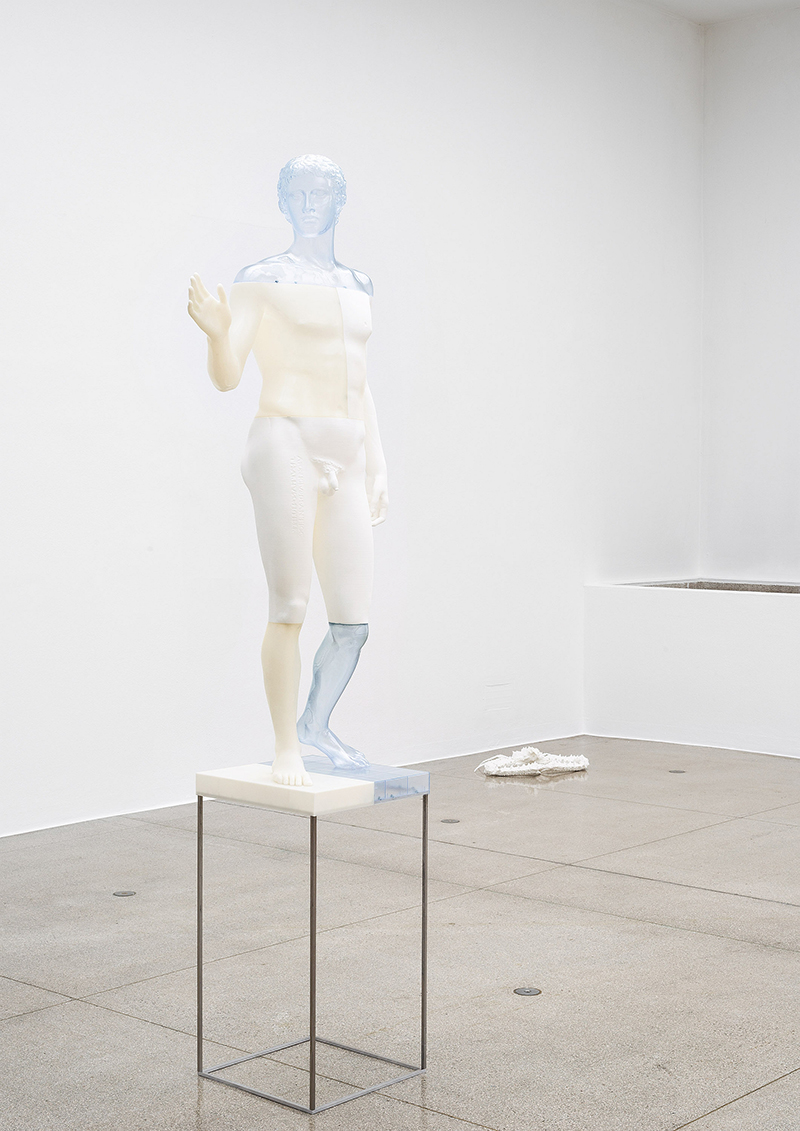 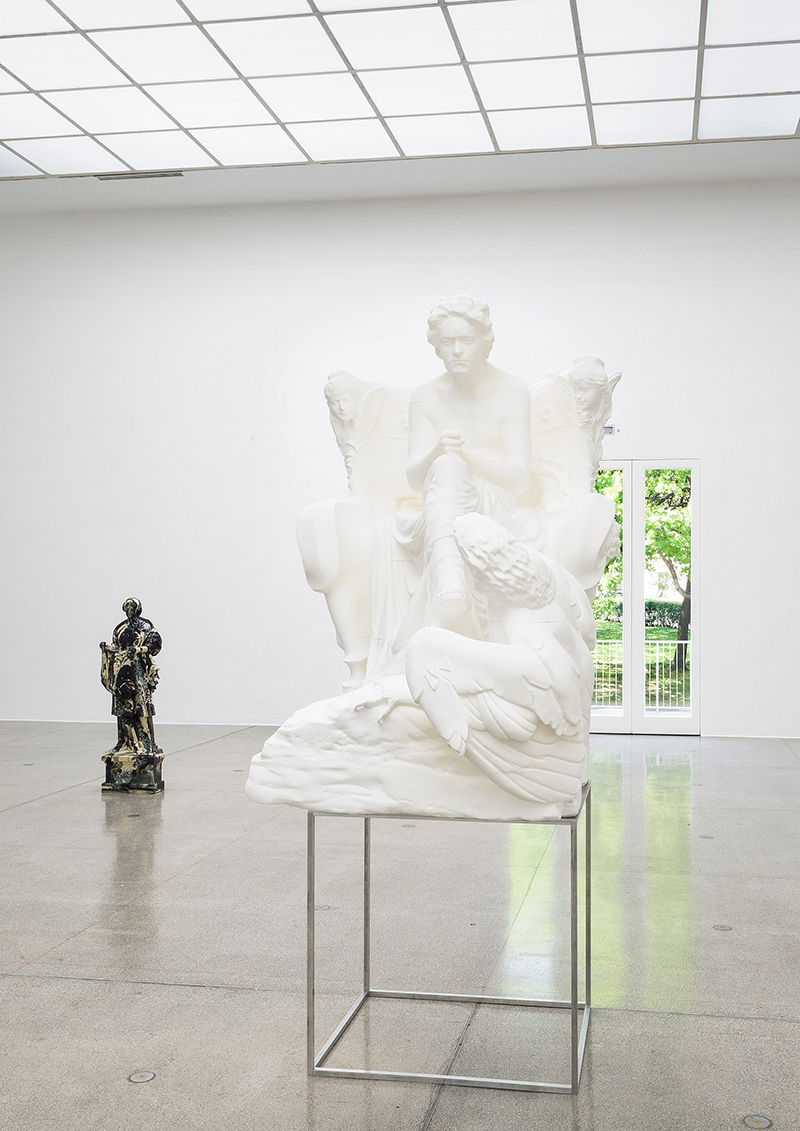 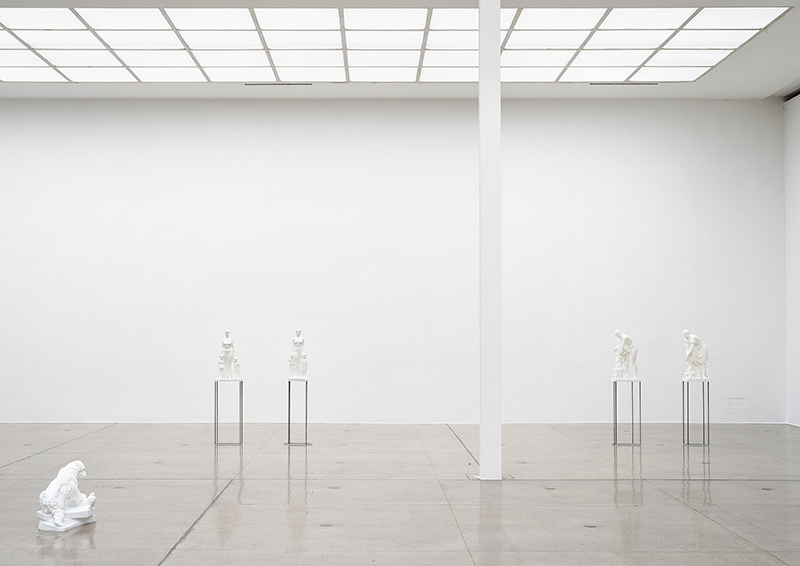 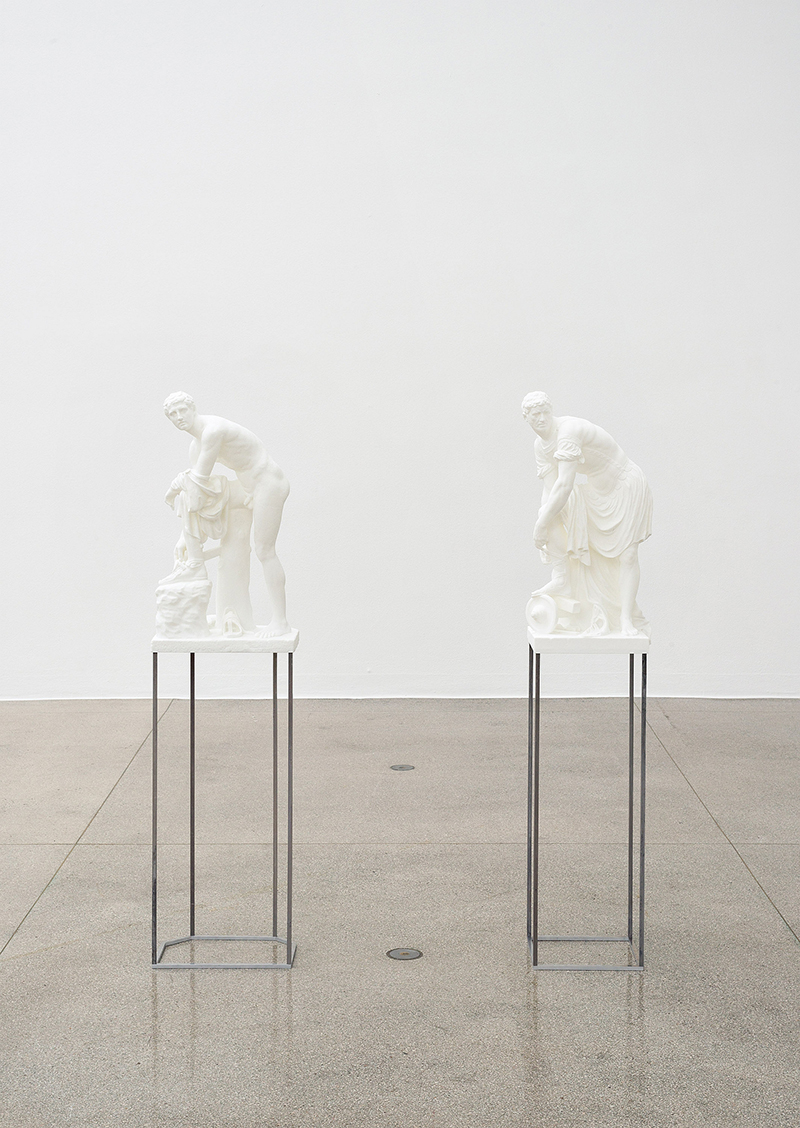 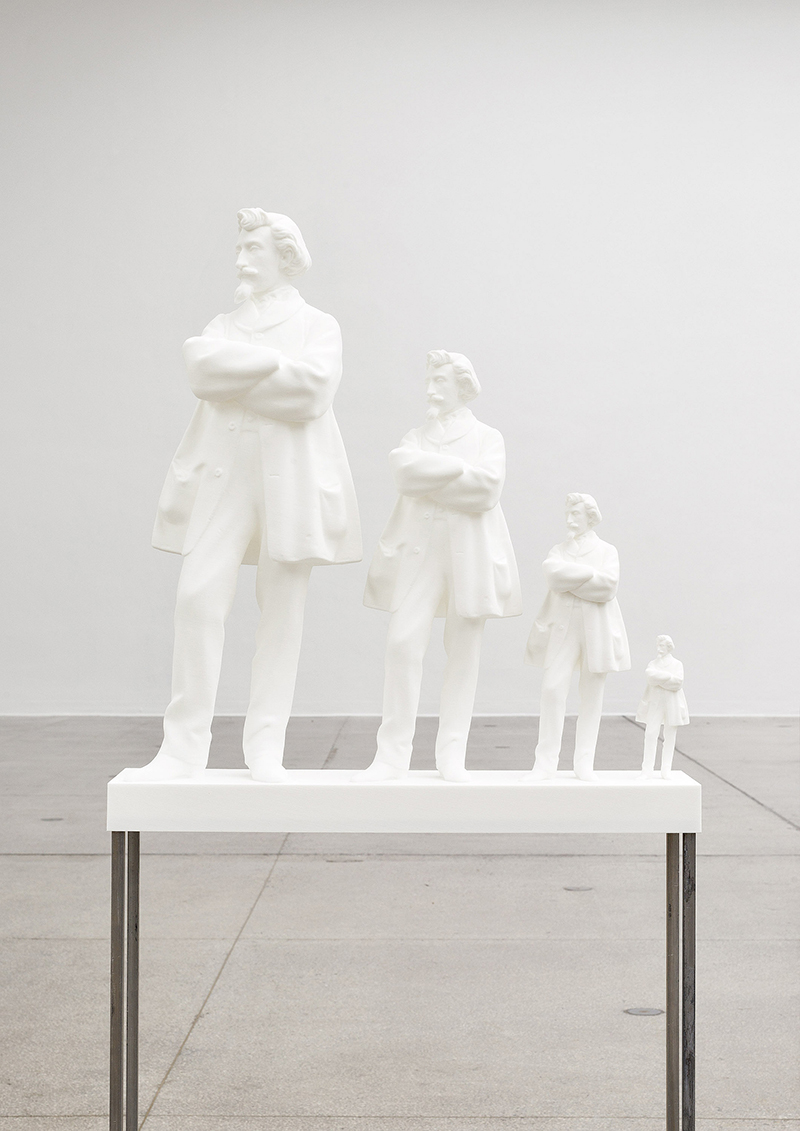 Images courtesy of the artist and Secession Vienna