Besides three art fairs, Wiels’ Absent Museum, the Belgian Art Prize and newly opening exhibitions in plenty of non-profit and collector spaces, you’d almost forget Brussels also has close to hundred galleries spread throughout town. Coinciding with the fair, plenty of galleries are setting up and opening new shows. We had a look at what’s happening and selected ten galleries you shouldn’t miss while visiting Brussels in the coming week(s).

Neither at Mendes Wood DM 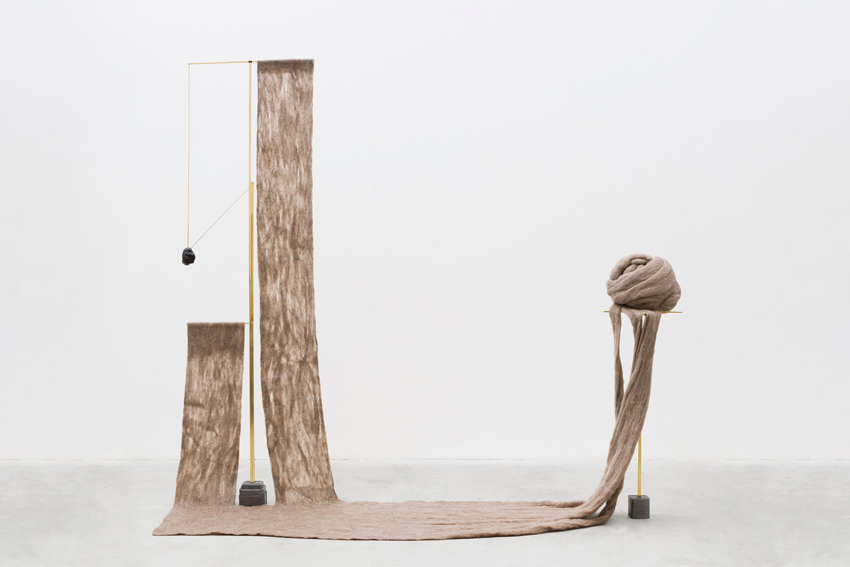 Fernanda Brenner, artistic director of the art center Pivô in São Paulo, has been invited to curate the inaugural group exhibition of Mendes Wood DM in Brussels. Titled Neither, the exhibition departs from the act of changing or expanding contexts in order to reflect on the time and the conditions it takes for someone – or something – to become again what it already is. Inspired by French literary critic and philosopher Roland Barthes’ conference at the College de France in 1978, the show investigates his idea of the active Neutral, pursued throughout his classes and deliberately never getting to any closed definition. Barthes’ Neutral stands before any possible category or consolidated paradigm, lying in the margins of language. Undertaking the Neutral as a starting point for an exhibition, proposes to revise methodologies of cohabiting spaces and reflects on how to be present in the struggles of our time. 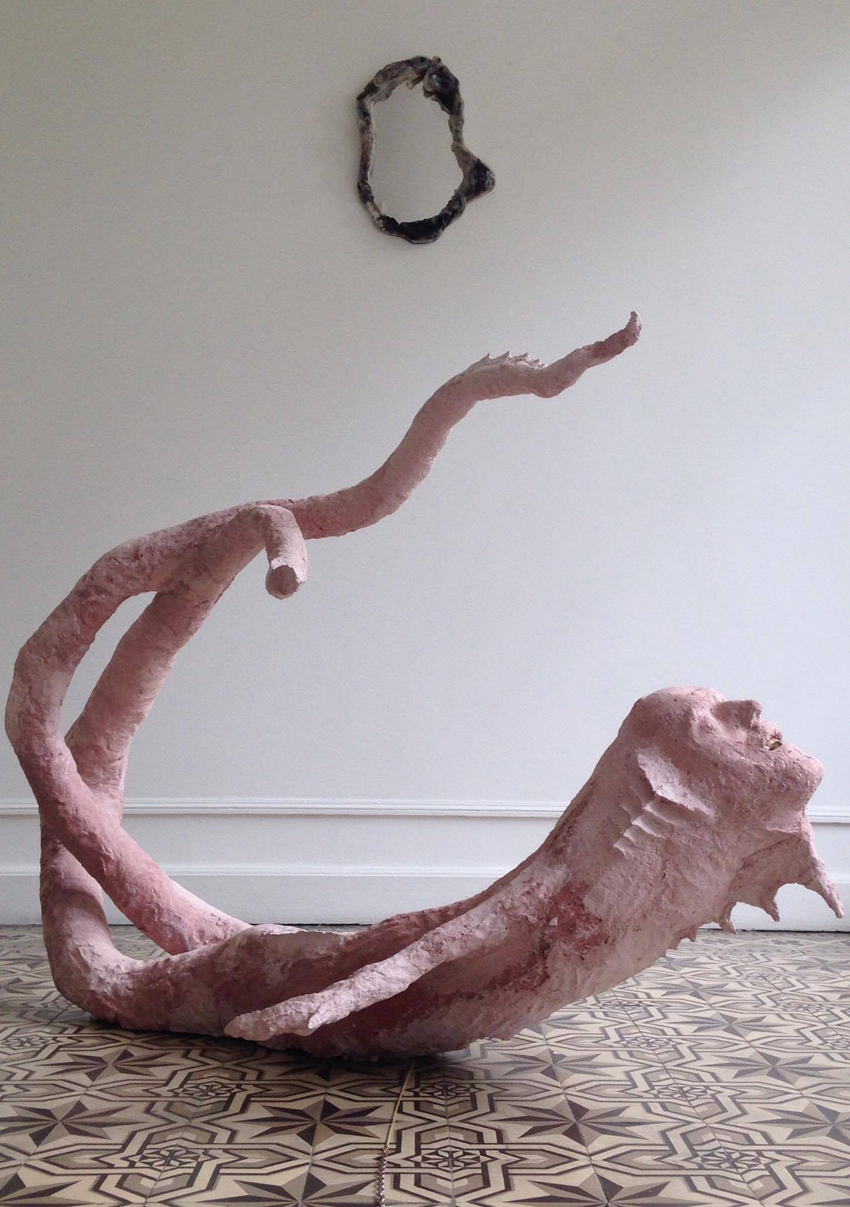 Hypokeimenon – En dessous du Sang is a group show curated by the young, london-based artist Nils Alix-Tabelling. Presenting the works of Nils Alix-Tabeling, Aline Bouvy, Jude Crilly, Emeline Depas, Nicolas Deshayes, Justin Fitzpatrick, Anna Hulakova, Motoko Ishibashi, Rebecca Jagoe and Birgit Jürgensen, this exhibition focuses on blood rituals and, more specifically, on fluids be they bodily or ideological, on the ways they embody themselves, on how they take possession of space, on the transfusion that occurs between the space, the art work, the viewer. 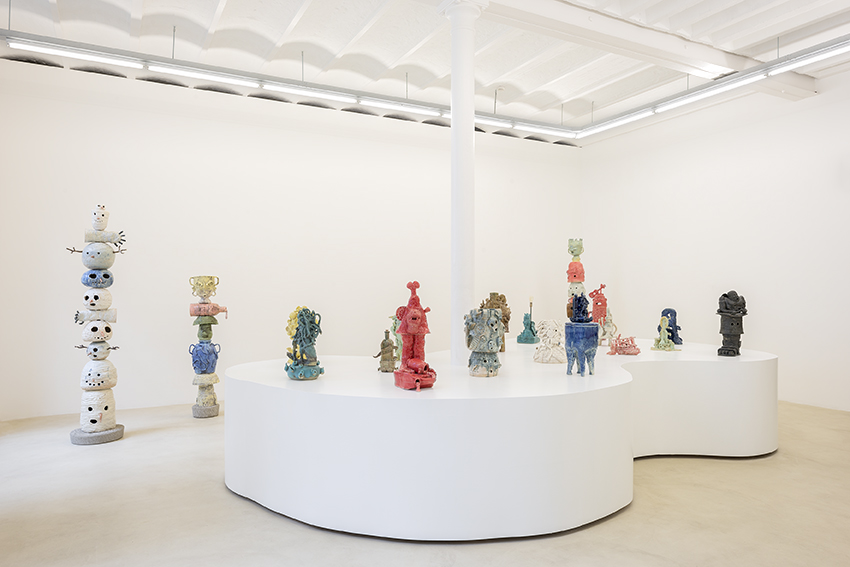 Eric Croes – Abécédaire – To my old friends . Courtesy of the artist and Sorry We’re Closed

For his first solo exhibition at Sorry We’re Closed, Eric Croes’ psychological universe has culminated in a series of 26 sculptures in ceramic, bronze and wood. The works in the exhibition were created in accordance with a rule, a simple protocol: take a sketchpad, assign a letter of the alphabet to each page, draw your favourite words there (his «old friends»). Next, create a three-dimensional assemblage of a selection of these words. A sculpture per letter. More often than not, the drawings are re-transcribed in ceramic with accidents involving clay, firing and enamelling. 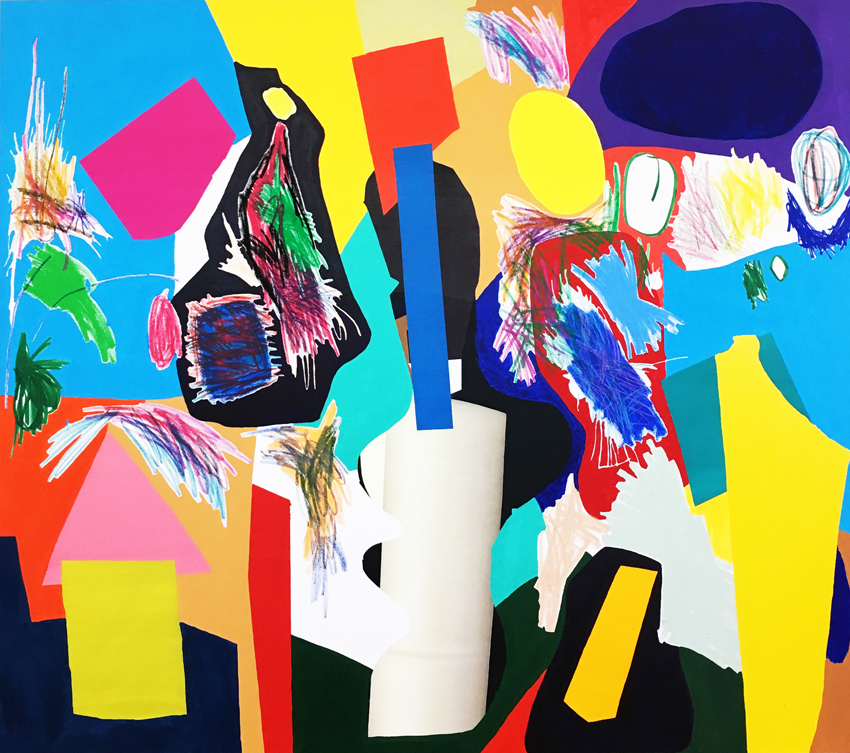 This is the first Belgian solo exhibition by this LA-based Greek artist, whose dense fabric of signs builds up presence around absence. For many years Varelas has been collecting outsider’s and children’s drawings, and their almost automatic creation constructed by absent minds has been a major influence on his work. Through film, performance, painting, drawing and sculpture, Varelas revisits a figuration that transcends narration and behave more like a concentrated imprint of a perception towards a subliminal understanding of the human condition. Rumors go Jannis Varelas will surprise with a performance on the opening night. 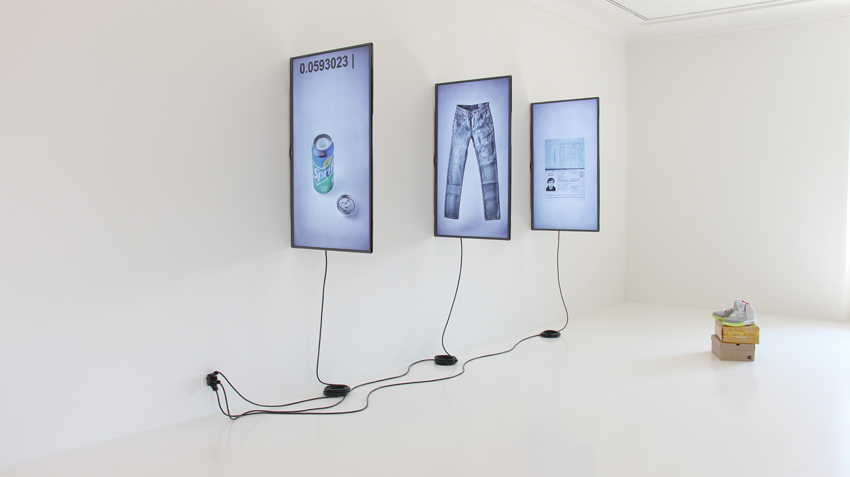 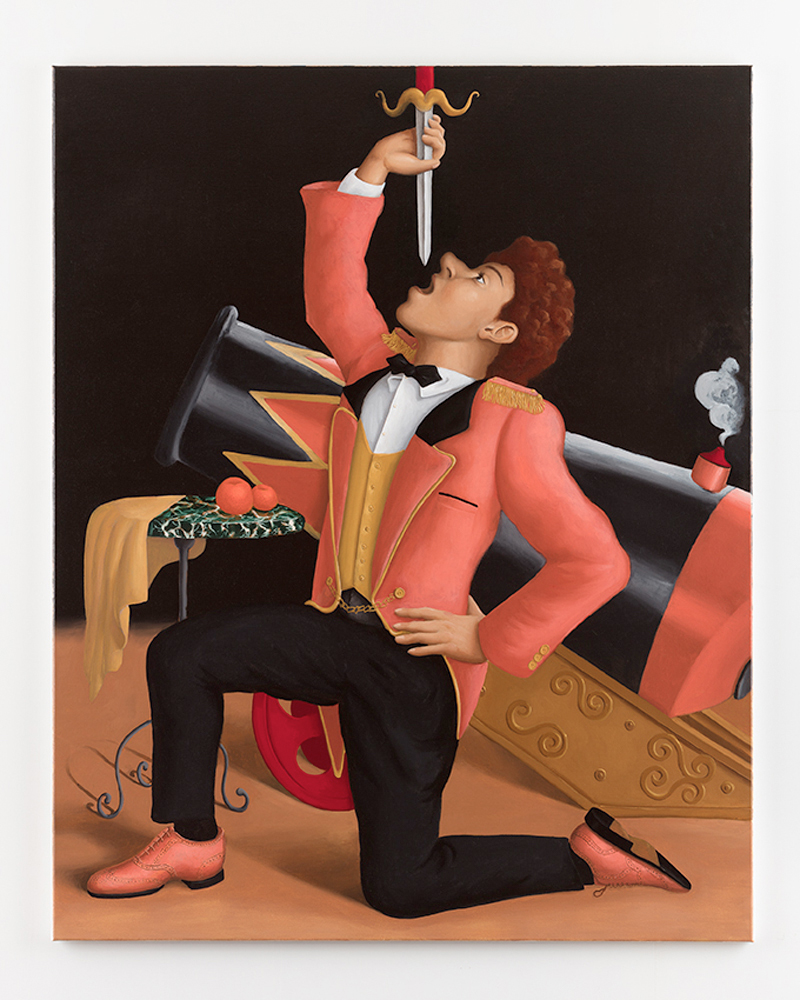 Patrizio di Massimo – The Sword Swallower, 2017. Courtesy of the artist and rodolphe janssen

With his newest body of works, London-based Italian artist Patrizio Di Massimo devotes himself entirely to painting, the crux of his artistic practice. For an artist who is known to engage across many media, this essentialist return to works on canvas is born from his ongoing desire to confront the medium exclusively and directly. For his first solo exhibition at rodolphe janssen it becomes Di Massimo’s prevailing language, as the self-taught painter explores the body as a cultural site.

Di Massimo does not paint the other, rather each work is somewhat a self-portrait. He poses for his studies of the male body while his partner stands in for female figures. This is, after all, about performance and acting, and a private exploration of the human form through fantasy and projection onto one’s own ego. 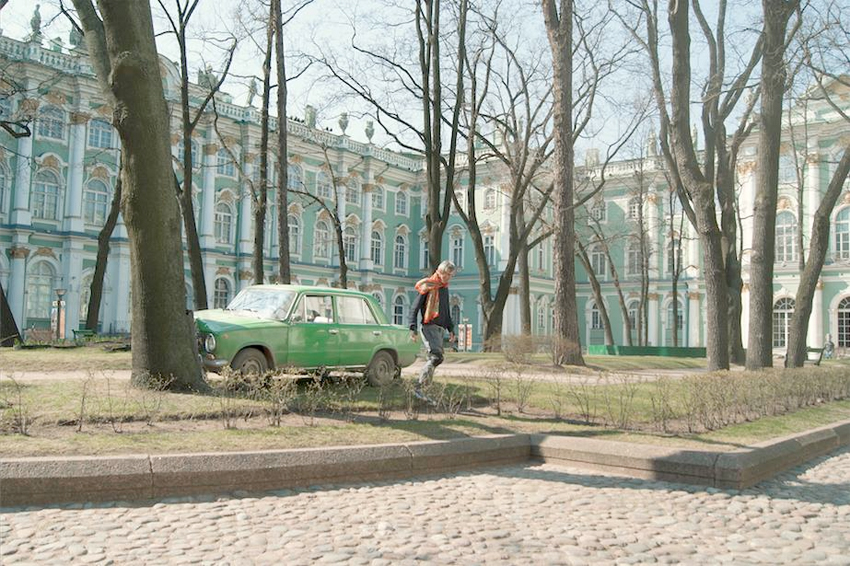 Without and ending there is no Beginning is Francis Alÿs’s first solo in the gallery and simultaneously the inaugural exhibition of the gallery’s new space at Petit Sablon. The show centers around the Alÿs’ Lada Kopeika Project, which he initially developed for Manifesta 10 in St. Petersburg. For this project the artist drove an old Lada from Brussels to St. Petersburg together with his brother, recreating an old childhood memory. Once they arrived in St. Petersburg, they crashed the Lada into a tree in the courtyard of the Winter Palace. This exhibition brings together the film of the crash, a map with memorabilia, and some paintings. 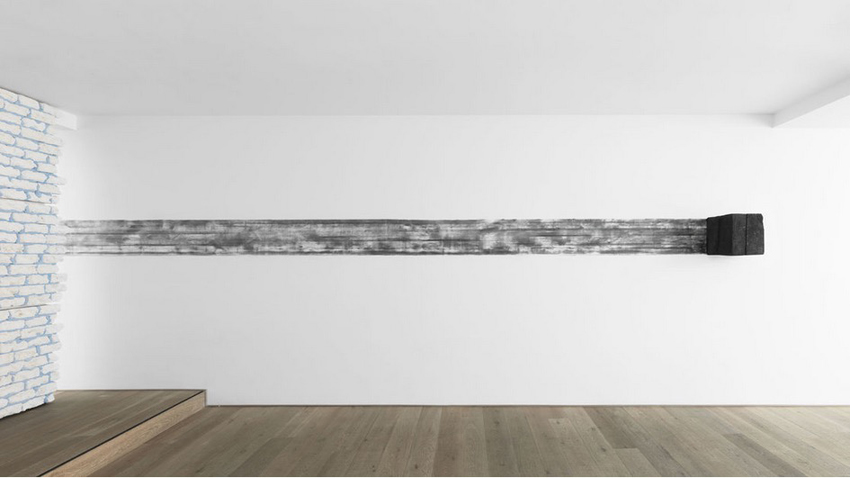 Michel François punctuates the gallery space with a series of sculptural works that depart from the rigid geometry of the line. Vertical and horizontal, suspended or freestanding, appearing in a masonry grid, defining a corner or marked across the wall: the linear trace is all pervasive. Yet each sharply defined edge, line, angle or plane also reveals its procedural antithesis: the organic, capricious and uncontrolled forms that arise during the making of the works. His works are, in a manner of speaking, ‘pieces of evidence’: the physical proofs of activities and events that have occurred elsewhere. They are action-based sculptures in the sense of being both the product and record of a controlled, but unpredictable, gesture. 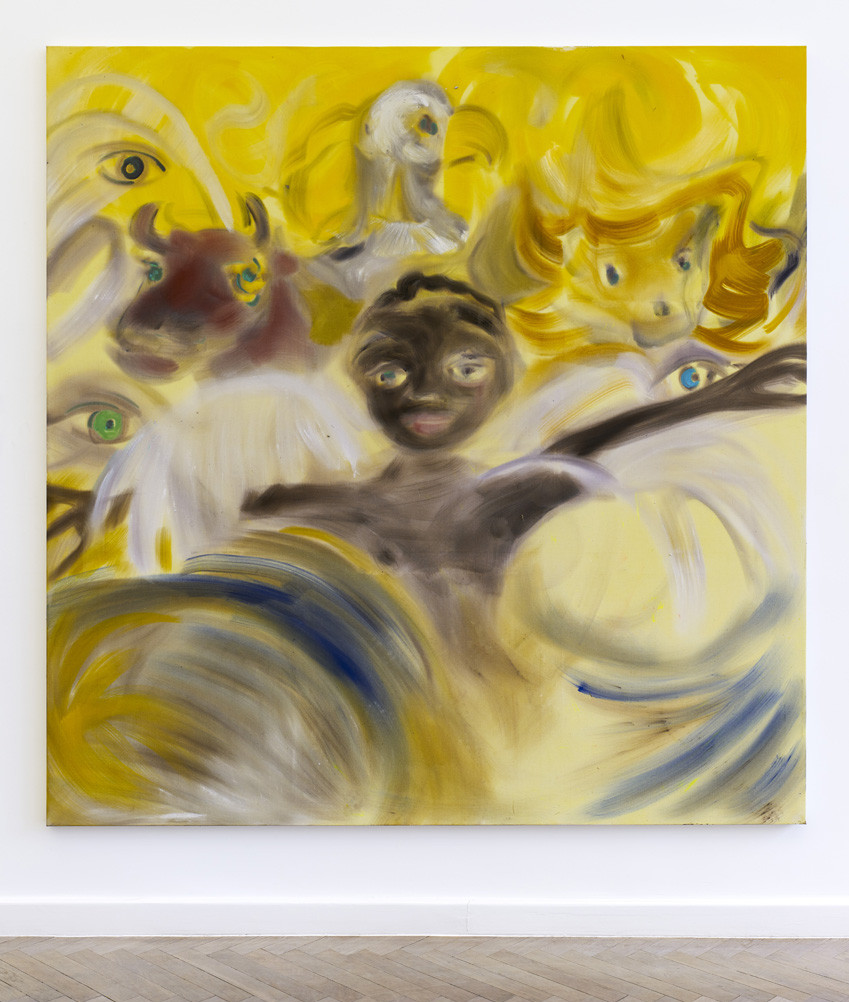 In Sophie von Hellermann’s works, personal narratives and fantasies are the product of desire and partial perceptions, bleeding into one another within her diaphanous figuration characterized by ambiguous moments and abstract spaces. For this solo, she took her cue from the name of the gallery. Baroque as the dominant artistic style of the 17th century has been a long-term interest of Von Hellermann with its exaggerated motion and clear, explicit detail that produced drama, tension, exuberance, and grandeur in art and painting. The paintings made for the exhibition are based on the theme of angels — the paintings can be seen as portraits of different figures made of light — messengers, guardians who are rising, singing, falling, fighting, resting and announcing within an oneiric, sfumato setting. 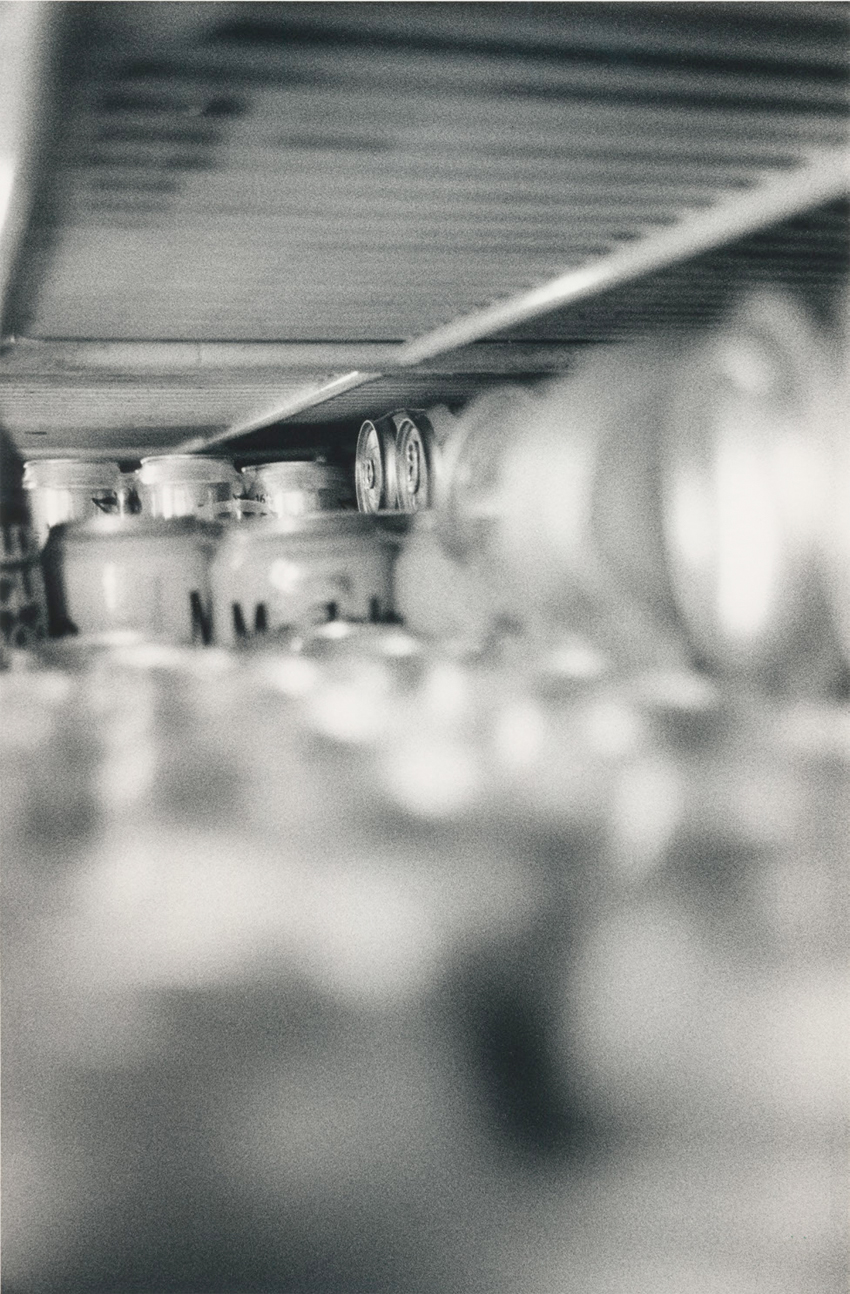 Gladstone Gallery is pleased to announce an exhibition of new work by Cyprien Gaillard, the artist’s first at the gallery’s Brussels location.  This unique presentation expands upon Gaillard’s unremitting anthropological inquiry into the rehabilitated readymade and the friction it proposes in both material and psychological states. Featuring in excess of 90 new photos as well as large scale graphite works on paper the exhibition digs deep into the artist’s interest in layered and loaded situations.  His preoccupation with and appreciation of disorder, be it as an aesthetic device or a portal into pedestrian bedlam, presents a platform thick with sociopolitical reference and philosophical inquiry.