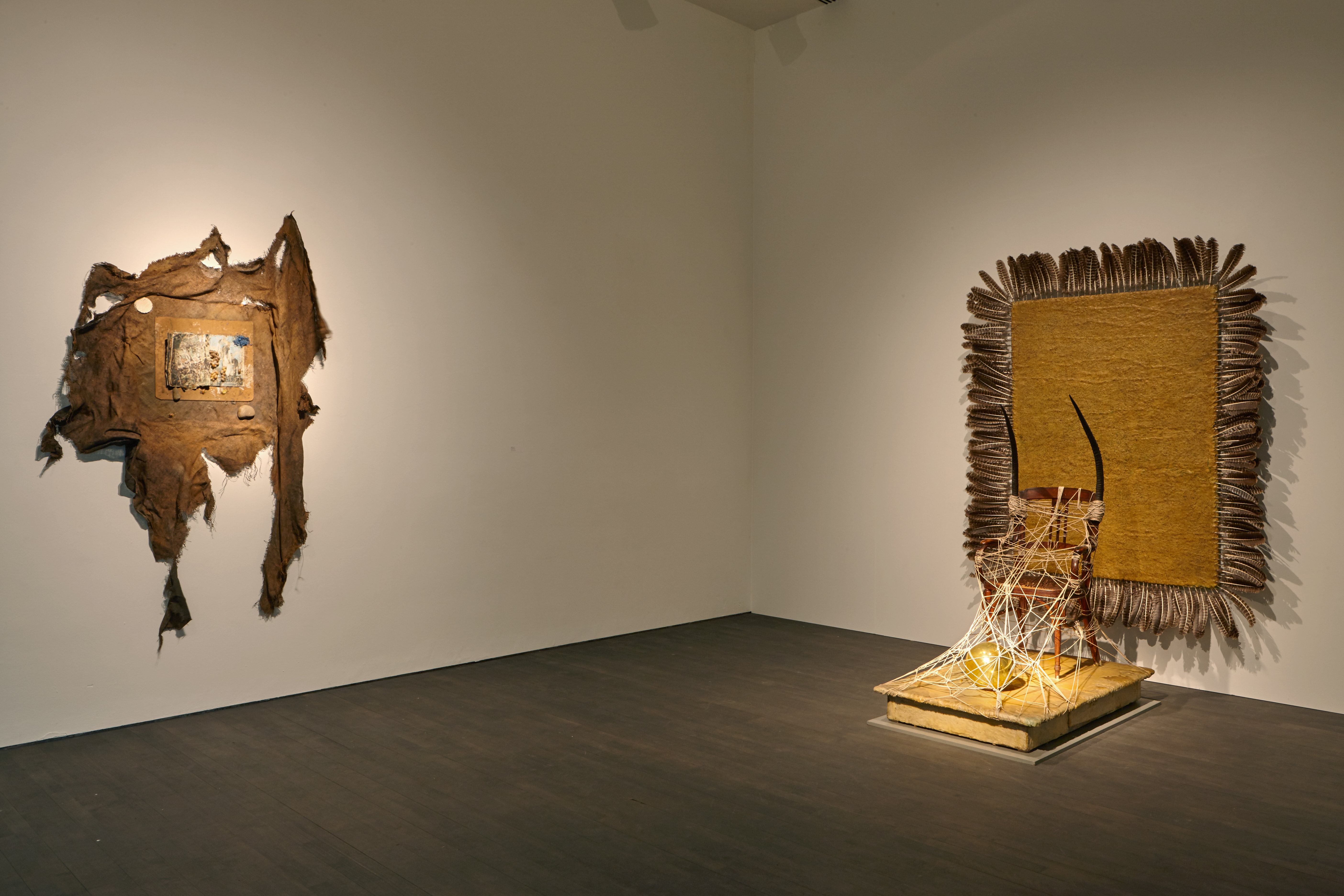 Michael Buthe’s (1944-1994) retrospective at S.M.A.K. presents a selection of key works by this German artist, covering his short but intensive career from the late 1960s to the early 1990s. We’ll be picking out some our personal highlights.

The exhibition starts with a series of beautiful early textile works. These works from the 1960s and early 1970s arose out of German Informal Art and American Minimal Art. They were a reaction to the crisis in painting as a medium at that time. Buthe followed in the footsteps of Lucio Fontana, who, with his cut and perforated canvases, aimed to bring an end to the limitations of the flat surface and allow actual space into his work. Like Fontana, Buthe literally attacked his canvases with a knife. Sometimes he also tore them to sew them back together again. Despite the seemingly spontaneous and ferocious actions that gave rise to these works, their composition is controlled, elegant and balanced, as well as showing precision of form. Associations with notions such as ‘wound’, ‘healing’ and ‘creating openings to other dimensions’, which became more pronounced in Buthe’s later work, can be traced back to these textile works. 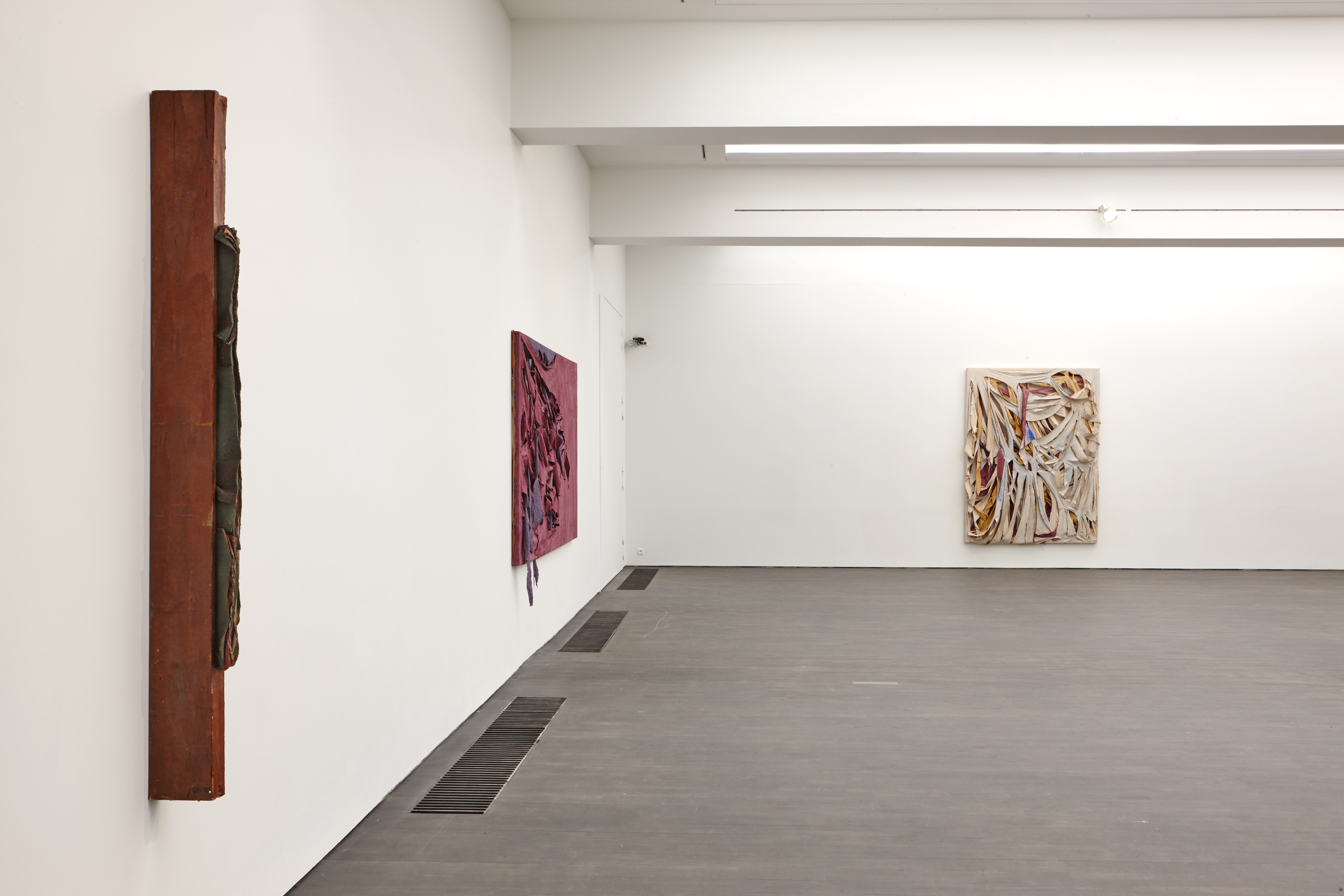 As from the early 1970s, Michael Buthe’s fascination with non-European cultures increased constantly. He regularly travelled to Morocco, the Middle East and Iran, and subsequently a non-European aesthetic developed in Buthe’s work that was inspired by the clear light, the radiant colours and the way of life outside Europe. Yet his work did not degenerate into any sort of naïve exoticism. It offered a critical, imaginary and personal response to the disappearance of spirituality and myth in Western society. Buthe became fascinated by everyday things that bear traces of their history. He amassed things that stimulated him in a cabinet in his studio. They included newspaper cuttings, art history illustrations, rubbish from the street and travel souvenirs. This became a source for his collages and assemblage sculptures.

For the assemblage sculpture Boulli Afrikaa (started in 1972), Buthe took as his starting point a pair of shoes he had received as a gift from a Senegalese musician. The unusual thing is that he continued to work on and add to this sculpture for several years. Elvira Oasis (1972-77) combines some widely differing materials. This was another sculpture that Buthe continued working on for a number of years. He first showed Elvira Oasis at Documenta V (1972) as part of the installation Hommage an die Sonne. At that time, it consisted only of wood and feathers. It was only in 1977 that Buthe reworked the object, adding textiles, and presented it as a work in its own right. 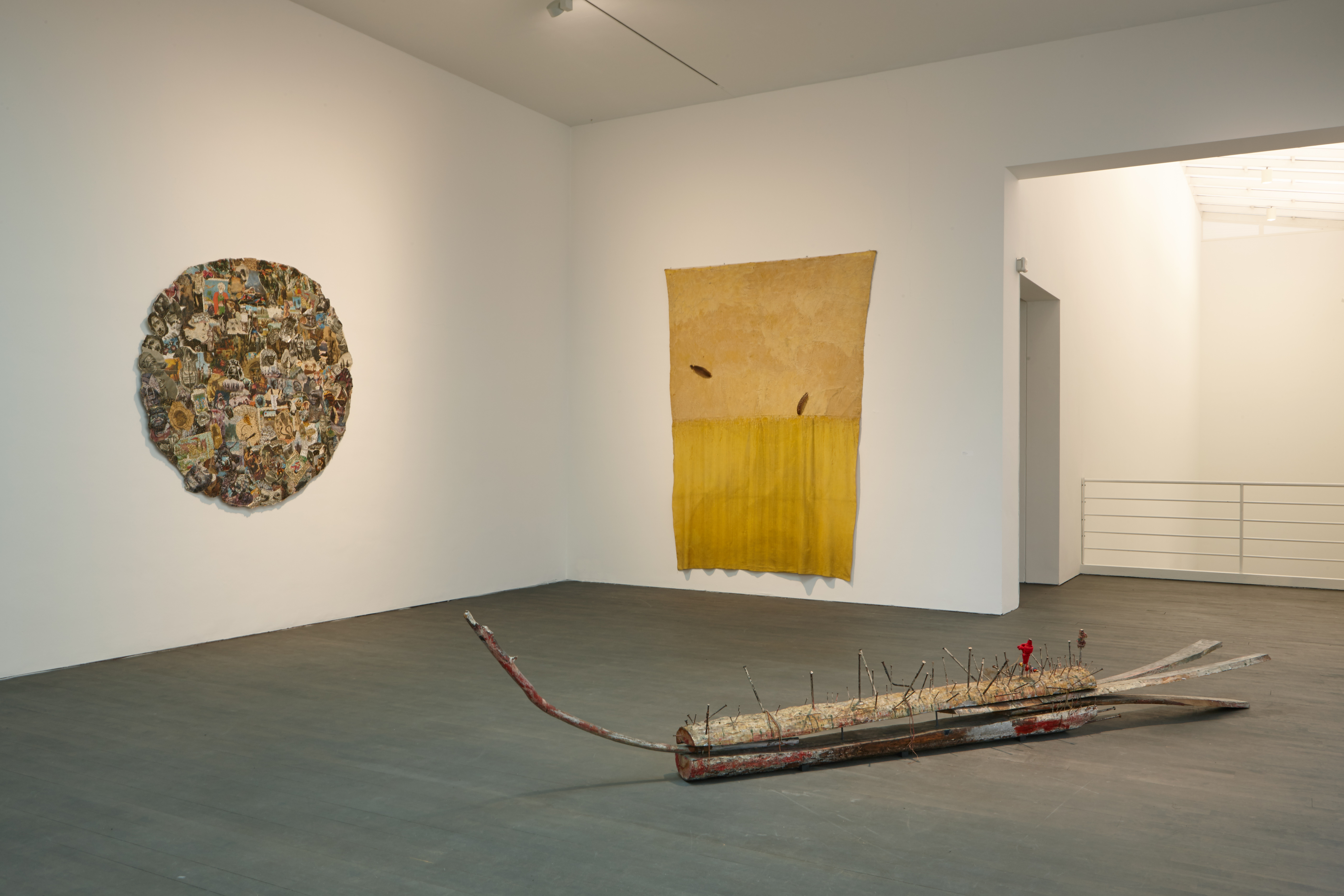 Buthe wanted artworks to undergo constant change, like life itself. His nomadic view of sculpture did not allow for stagnation. So many of his sculptures turn up indifferent forms and contexts. They appeared alternately as artworks in their own right or as parts of an installation. Between 1971 and 1992, Buthe created a great many room-filling installations. After a time he usually dismantled them and sometimes recycled parts of them in new interiors and environments. In this way he took his works from one materialisation or ‘incarnation’ to another, sometimes with new or removed parts. This explains why, only two installations have survivied: Taufkapelle mit Papa und Mama (1984) and Die heilige Nacht der Jungfräulichkeit (1992). 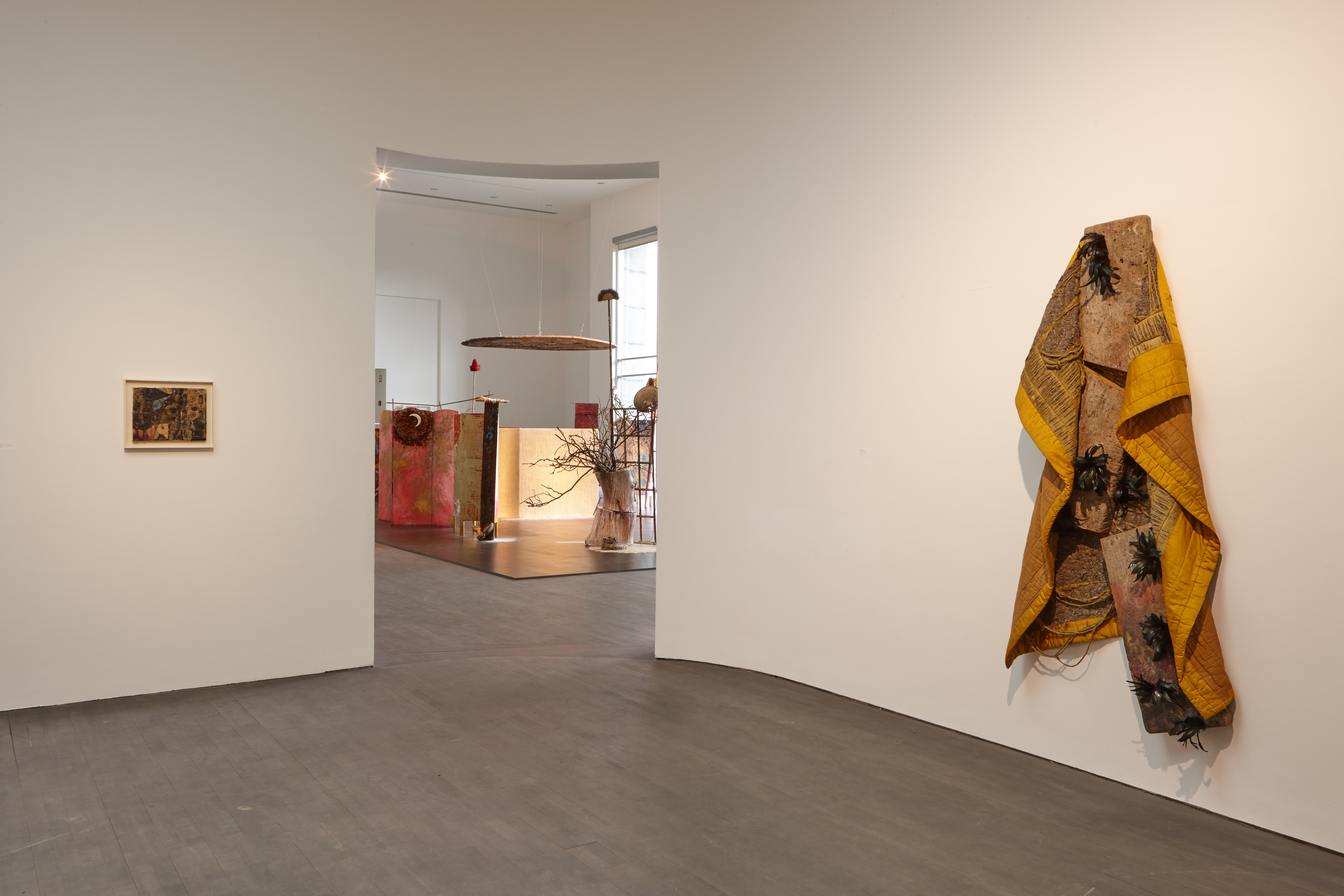 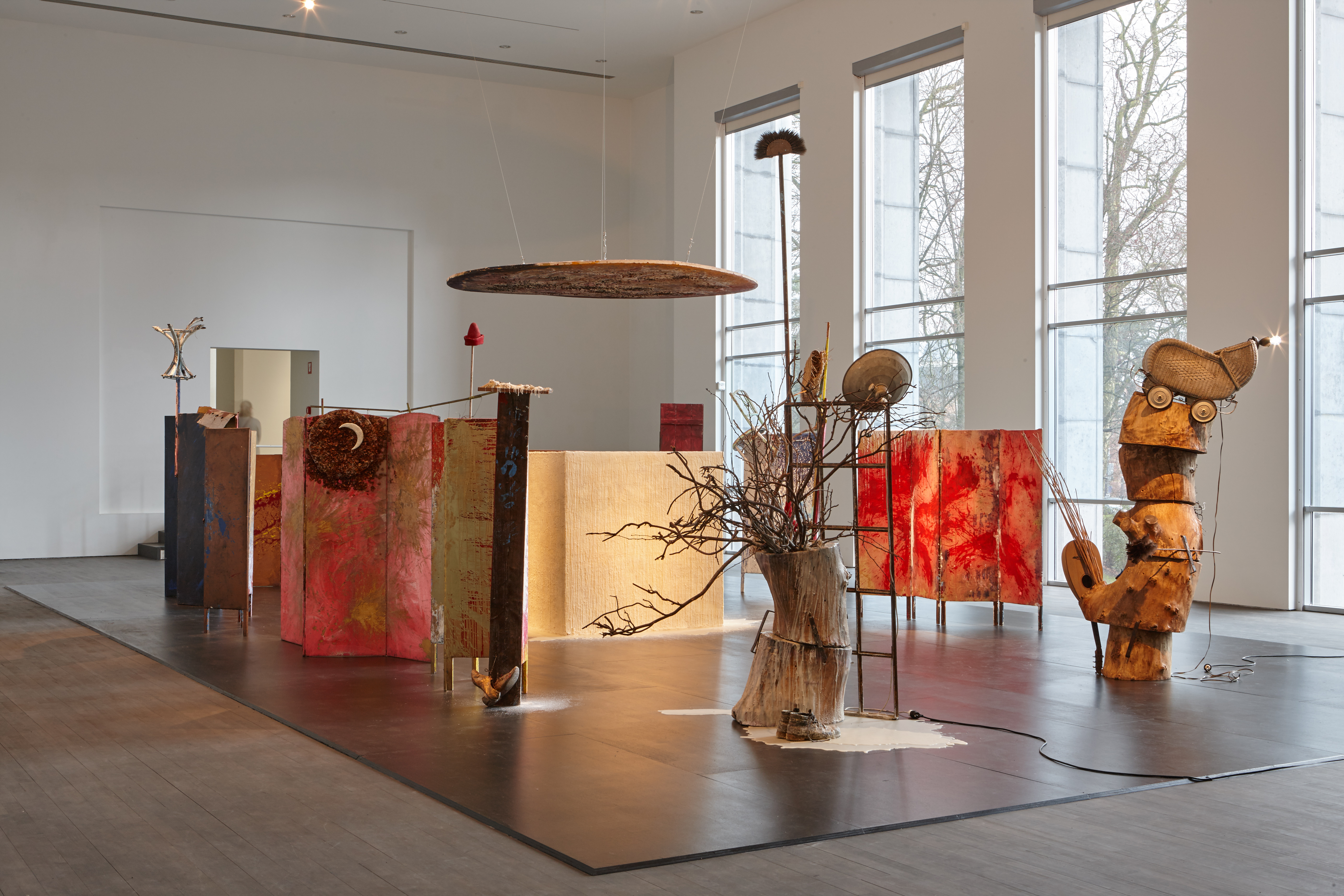 These two installations act as focal points in the exhibition. Jan Hoet played an important role in both. Buthe already had a sizeable exhibition in Ghent, in 1984 called Inch Allah. He created Taufkapelle mit Papa und Mama for that occasion and it remains an important work of the S.M.A.K. collection to this day. It consists of two sculptures (Papa and Mama), a circular painting above a cube covered in wax, and expressively painted folding screens to which found objects are attached. A pool of gold paint lies in the cube, like baptismal water in a font. In your imagination you can receive baptism in gold, a symbol of life and light. The screens are somewhere between painting and sculpture and create a wave movement in the room. In this work, Buthe refers, among other things, to the octagonal baptismal chapel in Florence Cathedral, baroque architecture, Joseph Beuys’ use of wax and gold, and the universal symbolism of archetypal forms such as the cube and the circle. The crude, comical sculptures called Papa and Mama can be read as caricatures of such biblical parents as Adam and Eve and Joseph and Mary.

This installation was originally conceived for another space, and S.M.A.K. curators Martin German and Dirk Pauwels opted to present Taufkapelle on a plan of the room where the work was first shown. The slightly raised floor on which the installation is displayed shows the dimensions of that room. This creates a distance, in which you are rather looking at the installation then being part of it. In this way, S.M.A.K. shows an aspect of the complexity that faces museums when re-installing site-specific installations of this size in a new location. 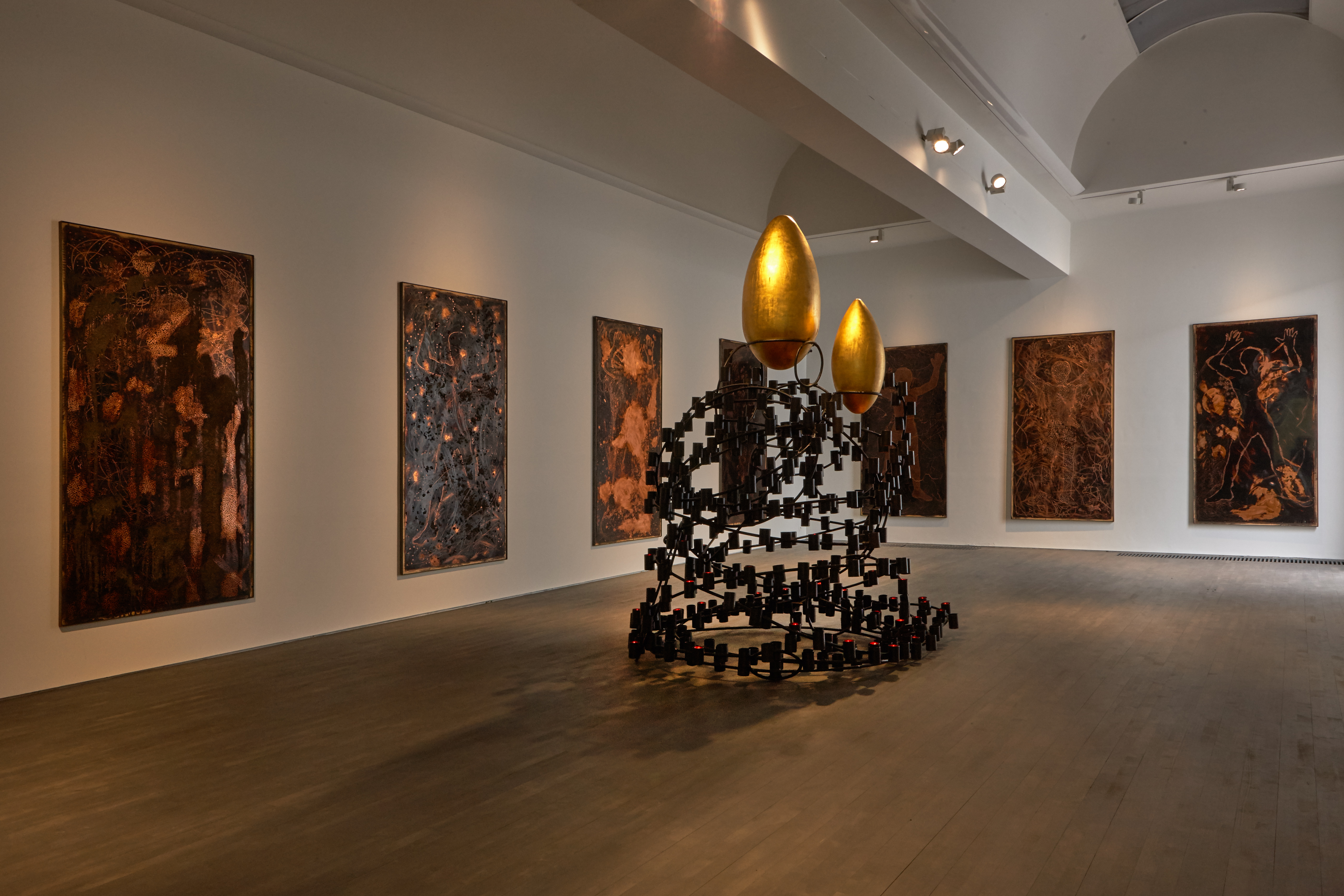 It was for Jan Hoet’s Documenta IX that Buthe created his final large installation Die heilige Nacht der Jungfräulichkeit (1992). The work refers to the Greek Orthodox basilica in the monastery of St Catherine on Mount Sinai. The decoration there includes ostrich eggs. Portrayals of saints ornamented with precious metals have been blackened over the centuries by smoke from the candles that illuminate Piero della Francesca’s Montefeltro Altarpiece (c. 1473). In this altarpiece, an egg-shaped pearl hovers above the Blessed Virgin’s head. The eggs in Buthe’s installation are also reminiscent of Constantin Brancusi’s egg-shaped sculpture Le commencement du monde(1909). The fourteen copper plates in which outlines of human bodies are engraved can be linked to the fourteen Stations of the Cross and the fourteen Holy Helpers whose roots lie in 14th-century Rhineland, where this group of saints was probably first worshipped to protect against disease and death during a plague epidemic. The flickering candlelight makes the figures appear for an instant and then disappear again equally quickly. Of this work, Buthe said: “The starting point is man, man who flies in the reality of his wishes and curses, of his divine nature and of the exposure to his devilish impulses.”