Kasper Bosmans:
The Words and Days – at De Hallen, Haarlem

The young Belgian artist Kasper Bosmans uses symbols, objects and stories from folklore and mythology in his work. As a kind of artistic anthropologist, he collects intuitive and associative comparisons and correlations between culturally diverse stories and traditions. In his paintings and sculptures he combines these into colourful, mysterious images full of evocative symbolism.

In the exhibition The Words and Days, Bosmans examines various traditions and stories from classical Egyptian and European mythology, in a series of new works. The points of departure for this are cranes and ibises: two birds with a long iconographic tradition. The central story of his research derives from the poem Metamorphoses, by Roman writer Ovid. In this work, classical and Egyptian mythology are interconnected on the basis of the story of the Roman god Mercury (Hermes in Greek mythology), who, though exiled, remained in Egypt disguised as a sacred ibis. Bosmans
weaves this story about the ibis with the European and medieval interpretation of the crane. In the Middle Ages, the crane was a symbol of vigilance. People thought that, while resting, the crane held a stone in its raised claw. Should he fall asleep, the falling stone would serve as an alarm clock. At the same time, the crane was an important reference to the nobility, which had the exclusive right to eat these birds. To check if the birds were fully grown, they were placed in a mud – a wooden or iron measuring device the size of a large bucket. If the birds were able to jump out, they were big enough to be eaten.
Bosmans does not place these differing interpretations of the crane and ibis in separate categories. On the contrary, he joins them into an inseparable unit within the exhibition. A good example of Bosmans’ associative method is his series of thirty fly sculptures. From a selection of feathers from different species of ibis and crane – gathered from the collections of ornithologists – the artist makes ‘flies’ that fishermen use
to fish in fast-flowing water with a special casting technique. With this, he connects his interest in iconography with a preference for materials with unexpected aesthetic possibilities, and with the techniques of folk art and crafts. Bosmans makes use of traditional knowledge and folk traditions
from his own environment, the rural Belgian Kempen. Thus he produces the fishing flies together with his father, who has mastered this technique.With his focus on folk traditions and rituals associated with social histories, a subtle critical undertone resonates in Bosmans’ work, which encourages the observer to think about topics such as technological progress and globalisation versus oral traditions and the regional.

In this exhibition, Bosmans underlines his interest in nature and natural materials by examining the habitat of cranes and ibises, thereby collecting relevant materials. Thus the mediaeval symbolism of the vigilant crane reappears in stones that the artist collected in the habitat of these birds. He highlights the privilege of the nobility to eat cranes in a symbolic manner in the exhibition, by placing capacity measurements in the space.

Among other objects on loan from Dutch and foreign institutions, the exhibition includes a new series of so-called Legend paintings, which the artist has been making for years and that function as indices of the topics that he addresses in the exhibition. Bosmans also made a series of paintings in a larger format specifically for The Words and Days, in which he further develops the geometric and decorative forms from his Legend paintings. In these, the indexical visual elements are further abstracted into decorative patterns that no longer refer back to their narrative origins, and thus make a more universal claim. 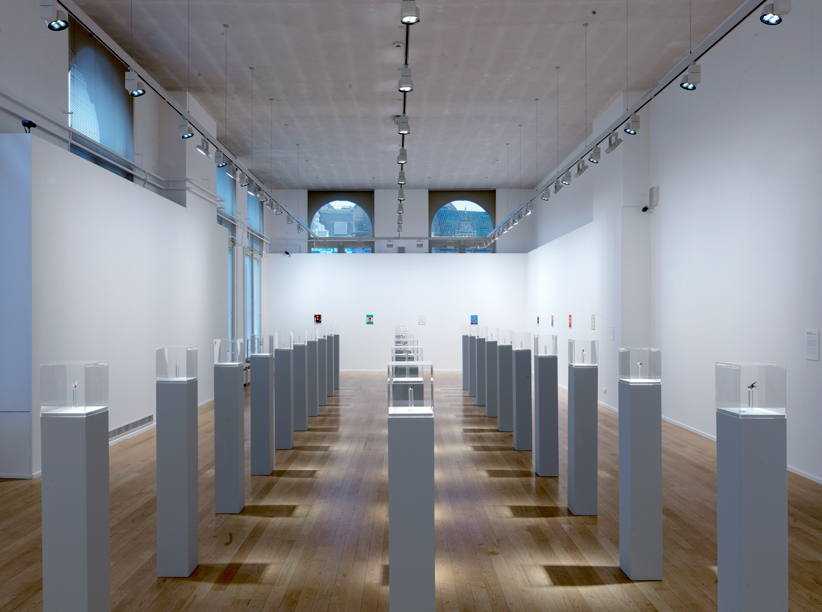 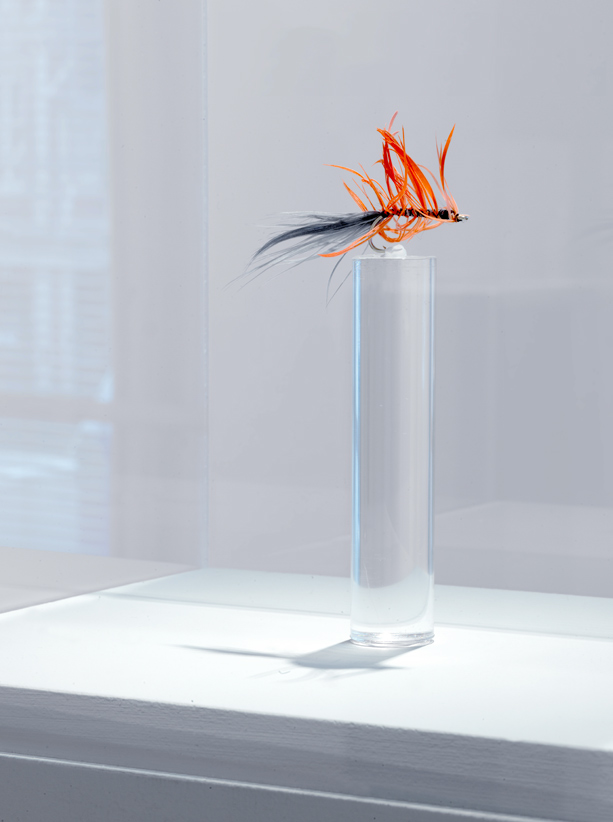 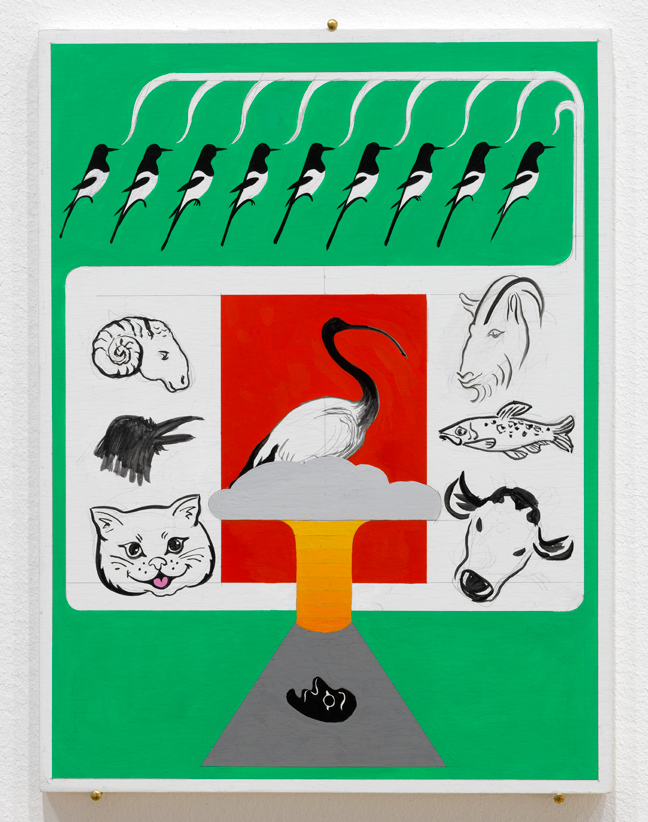 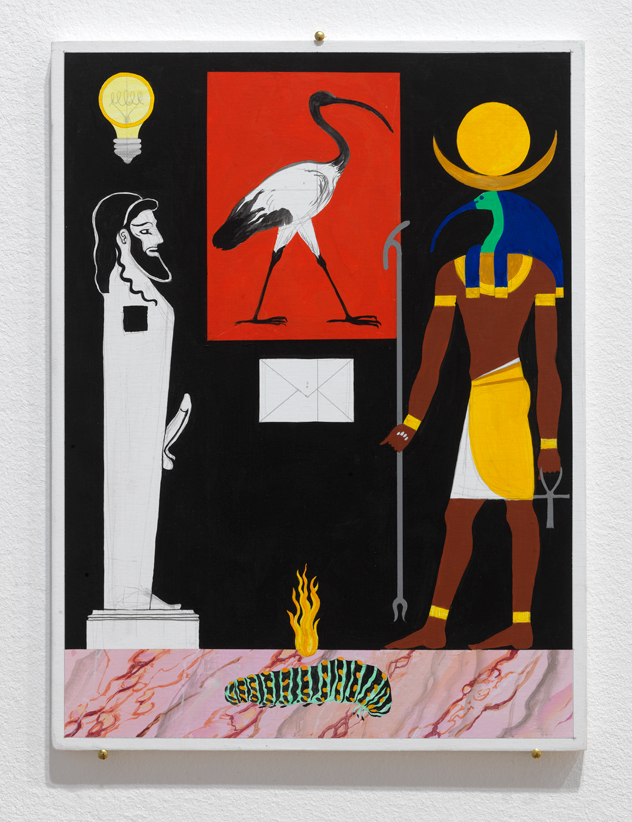 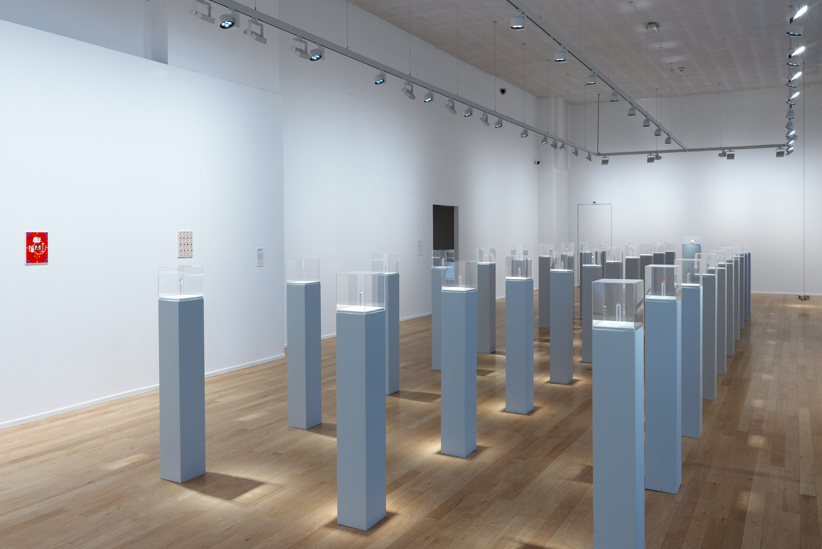 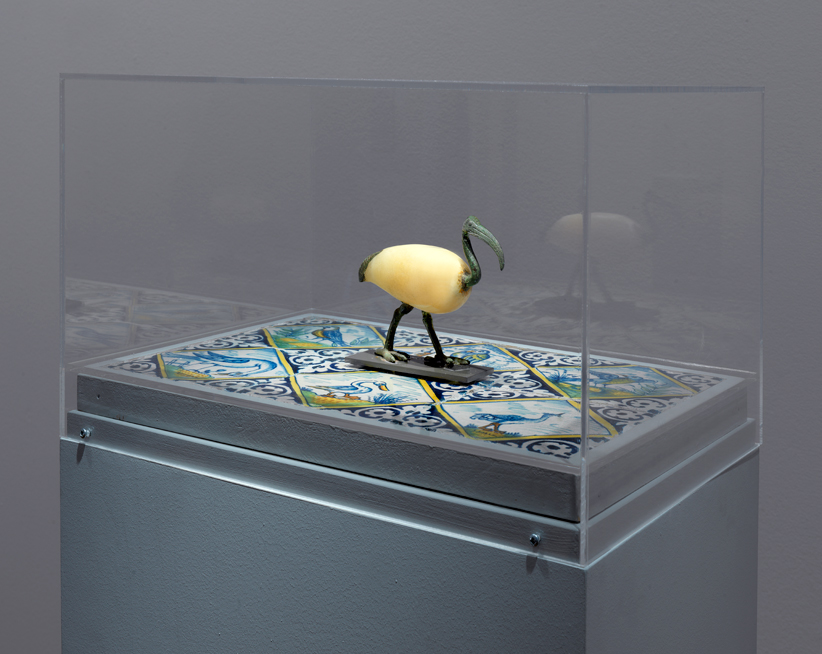 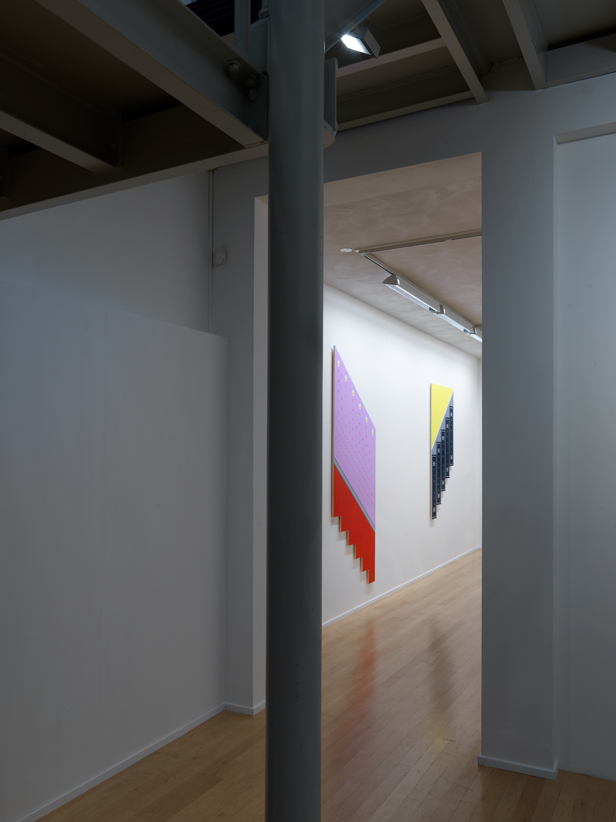 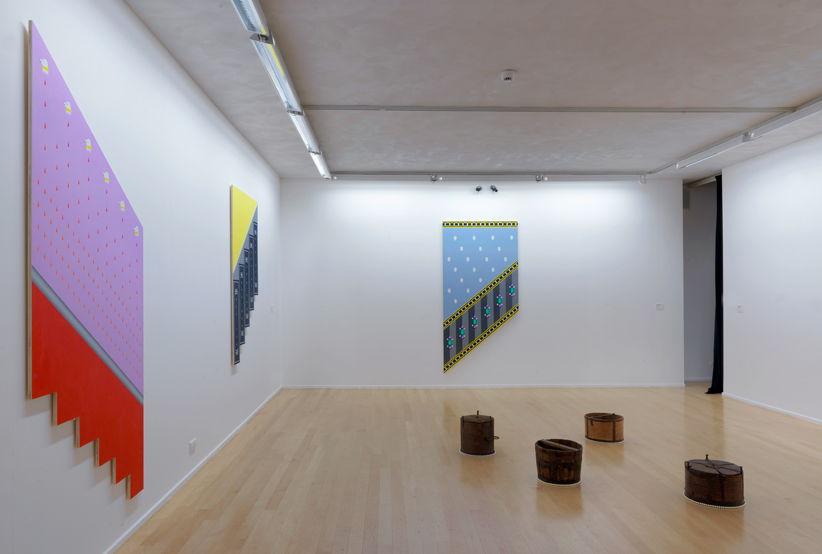 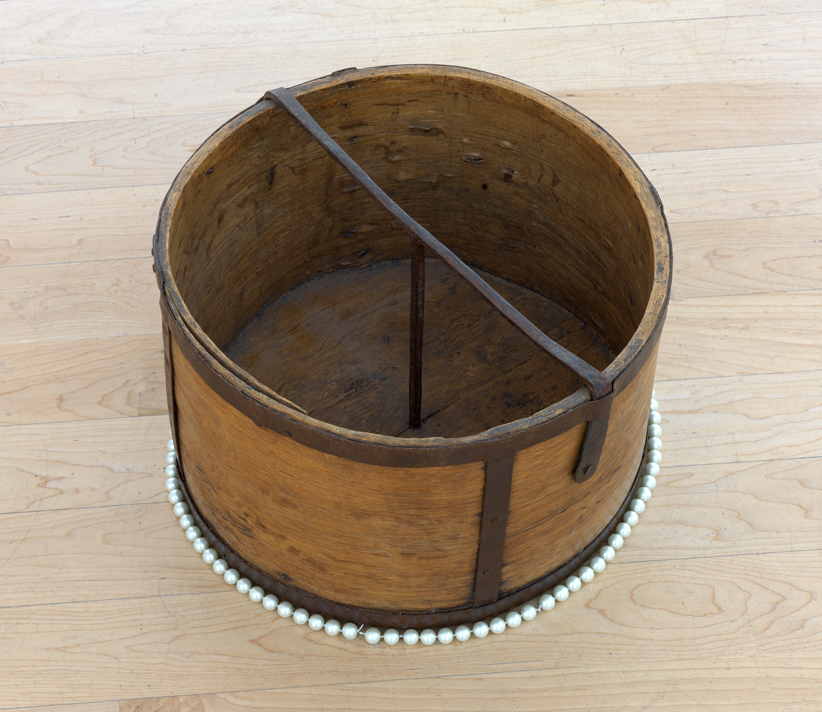 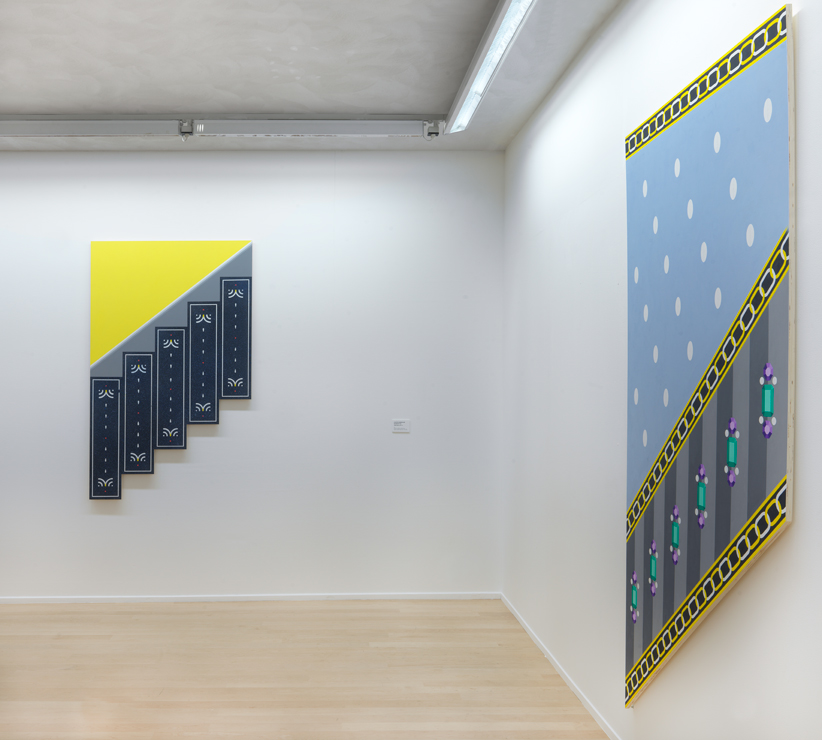 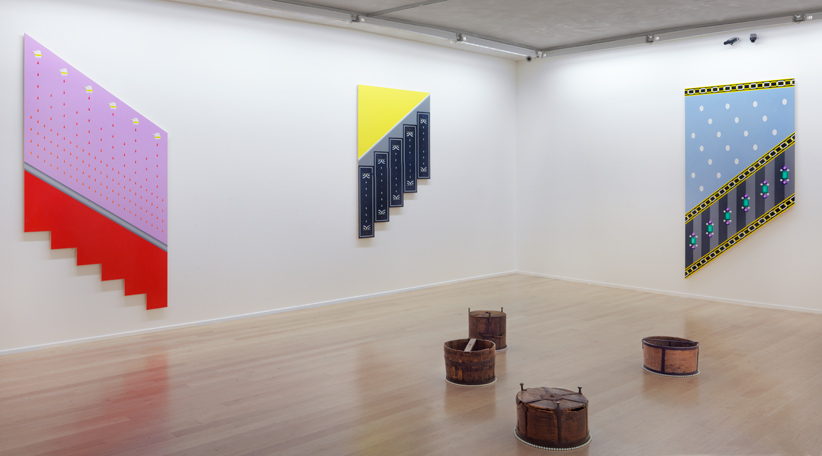 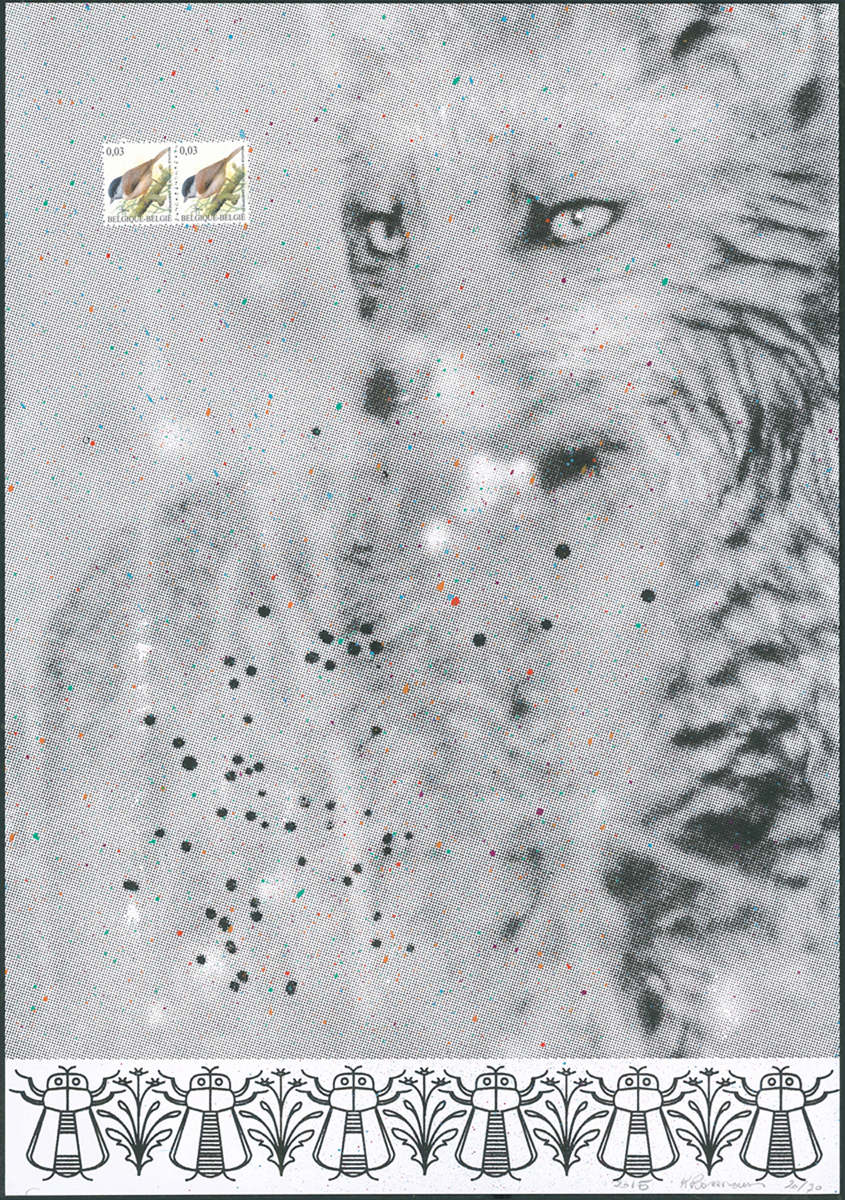 This unique collage is made in a series of 30 variations, signed and numbered by the artist. It comes in a folder with works by Michaël Van den Abeele, Joelle Tuerlinckx, Sarah & Charles, Aline Bouvy, and Claire Fontaine. The price of €350 is for the full folder – works are not not separately.