The first impression of Jordan Wolfson’s show Manic / Love is auditory. A whirring sound of machines, a clanking and unraveling ‘vrrrrrt’ of chains dragging over the floor, whirling through the room before amassing in piles and being reeled in again. Then, once you’re inside, you see what the racket is all about. At the end of the chains, suspended by one arm, one leg and its head, hangs a huge puppet; Jordan Wolfson’s newly installed Colored sculpture. Its red hair and grotesque facial features are reminiscent of all-American heroes like the trickster Huck Finn or Mad magazine’s gap-toothed mascot Alfred E. Neuman. Or, more close to home, an outlandish version of the ever-smiling Kinder-child. 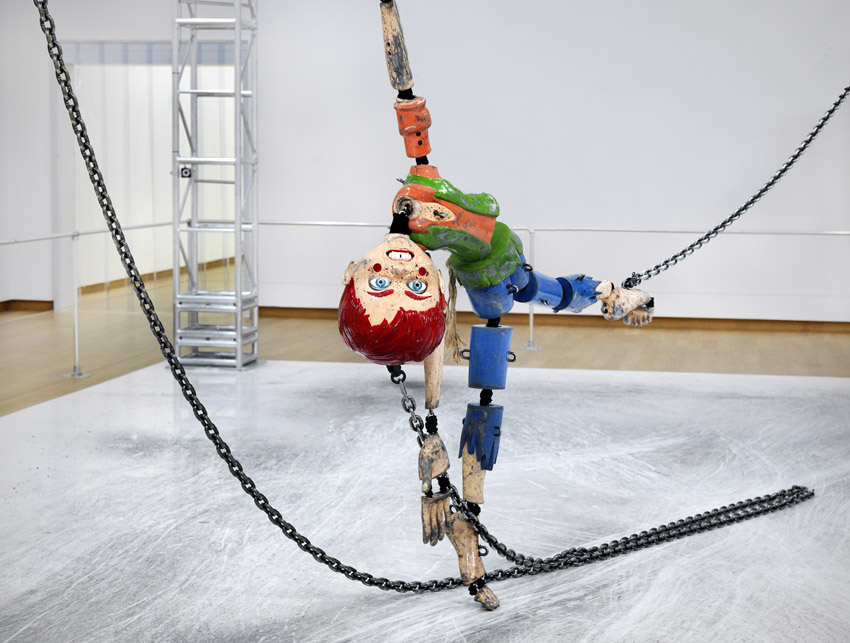 Animated by the chains, the puppet moves through the space of one of the rooms of the Stedelijk. At first, the movements are halted, with suspense-filled pauses during which we hear nothing but the sound of the machinery. Then, the mechanical puppeteer seems to pick up speed and starts violently yanking the puppet here and there, with apotheoses of smashing him down, head first to the floor. Its eyes blink and scan the room like it’s looking for a way out while it grudgingly bears its fate. Moments later, we’re off again, the choreography continues. As if the smashing-around of the figure isn’t enough of an impact already, its eyes have facial recognition technology which allows the work to lock eyes with you, the visitor.

Most of the performance is done is relative silence. Once during the loop, a male voice booms through the speakers, calling out a bizarre sequence of numbered actions and behaviors. At another time, the pop song When a man loves a woman pierces the silence, seemingly echoing the involuntary trashing we all suffer at love’s smiting hands. Just as abruptly as the song started, it stops again, the puppet continuing its bitter ballet. 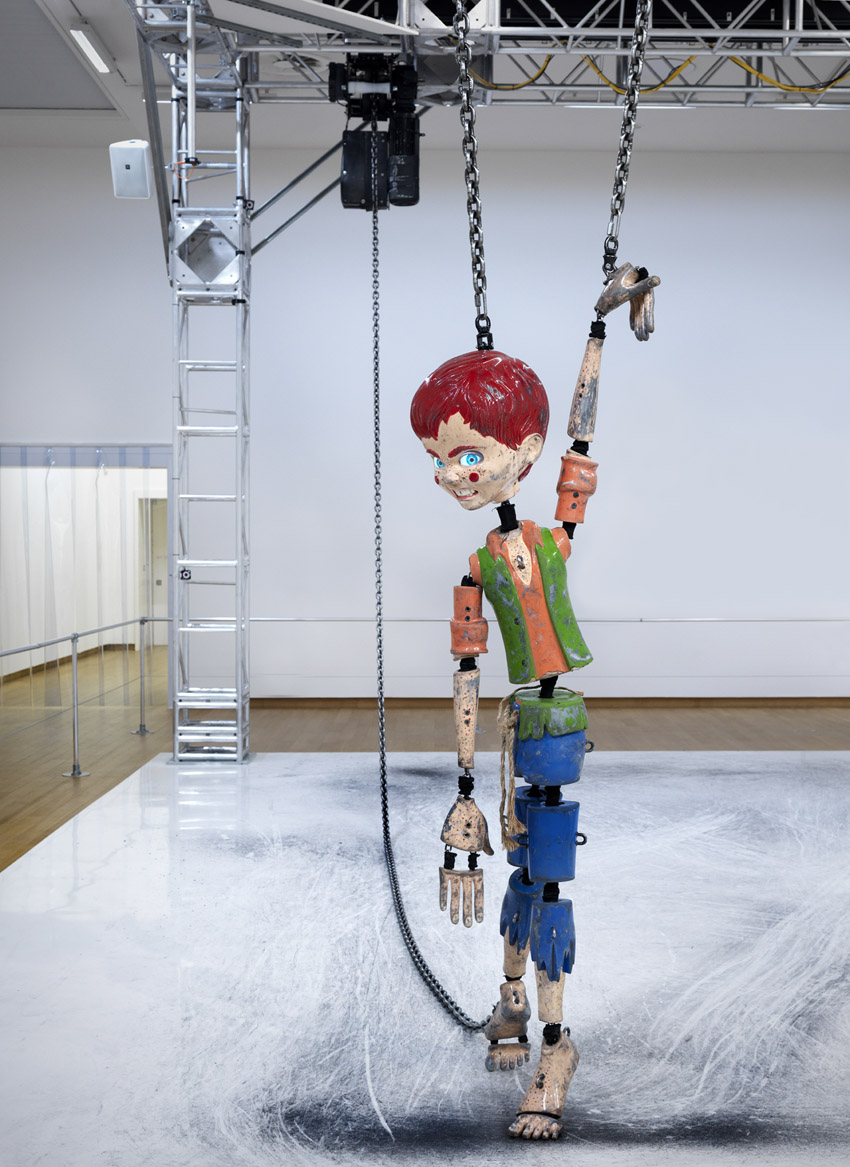 At one point during the macabre choreography, the figure moves back to the front of the room and seems to hover from left to right in an eerie silence only disturbed by the sound of the machinery. Its eyes, which only moments before were looking around at their audience and blinking, now become monitors, displaying videos of Jordan Wolfson’s typical, technicolor cartoon-violence, mixed with text. This last only for a minute, then the dance continues.

Slightly dazed, we walked through the rest of the show, which was two digital paintings, one very early video from 2004 called The Crisis and an all white carpeted screening room with Wolfson’s 2012 classic Raspberry Poser. 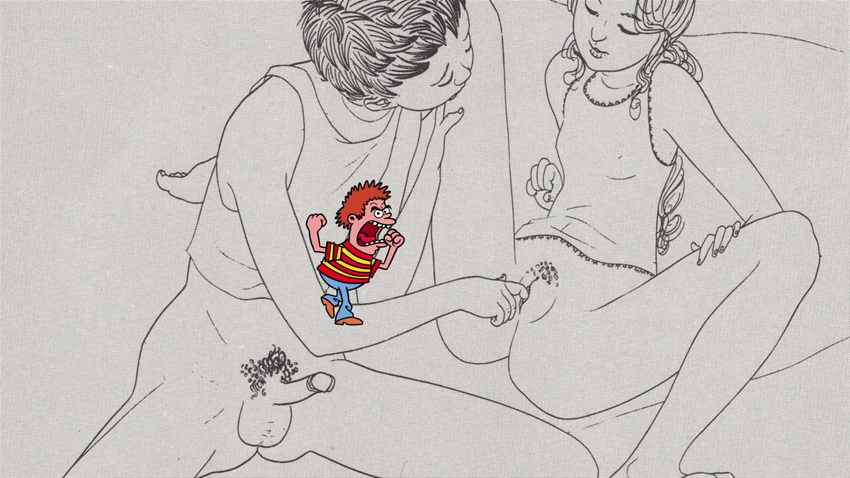 Wolfson’s exhibition Manic / Love / Truth / Love is made of two parts. Once the first part is over, at the end of January 2017, the whole set-up will change. Colored sculpture will go and another animatronic, entitled Female figure, will be installed in a second room, surrounded by other works.
Our first question to Wolfson related to this…

Is the second part of the show already thought out?

I’m still working on it. The main thing to keep in mind is that this show puts Colored sculpture forward and creates context around it using other works. Similarly, Female figure will also be used as a ‘centre storm’. While she won’t be introducing the show like Colored sculpture does, she will definitely be the most elaborate.

Why did you choose to have a two-part show, with the first part running until the end of January and the second part starting at mid-February?

I felt my works would fit best in the more ‘salon-style’ rooms of the institution. It just made sense, aesthetically. A show with the two animatronics together would have been fabulous, but we just didn’t have the space to do it. So now we’re showing them one after the other – and it made sense to show the newer work first and then Female figure. I really hope to show them together, though, one day. 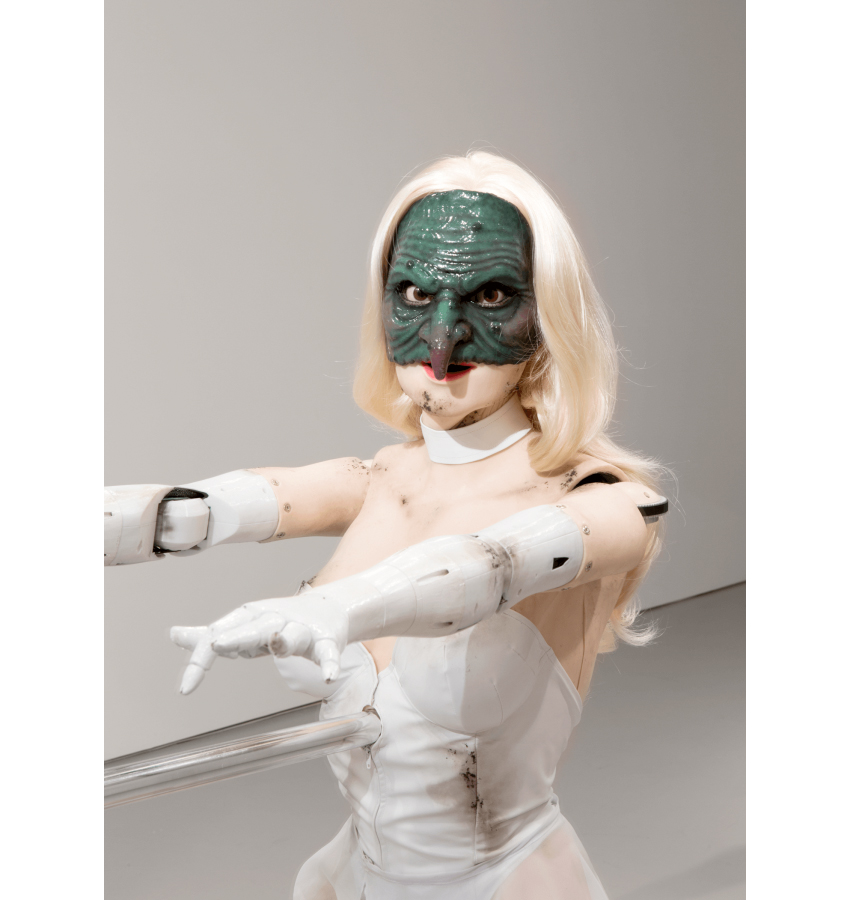 Both animatronics have the ability to look back at the viewer. Why was this important to you?

How could I resist, really? The technology allowed for it. In fact, I wanted even more of it, but it overwhelmed the work formally and compositionally. What I also find very interesting is the fact that its eyes become video screens, in the way that it flexes between looking and being looked at and between subject and object.

This switching between the work as object and subject allows for an intense link between the piece and the audience. Would you like to take this even further in future work?

I don’t know. I needed a big break after finishing Colored sculpture and I’m just going to continue following my interest. I don’t really have an ambition for scale but more an ambition to reach a type of core, for reaching a kind of vibrational intensity. 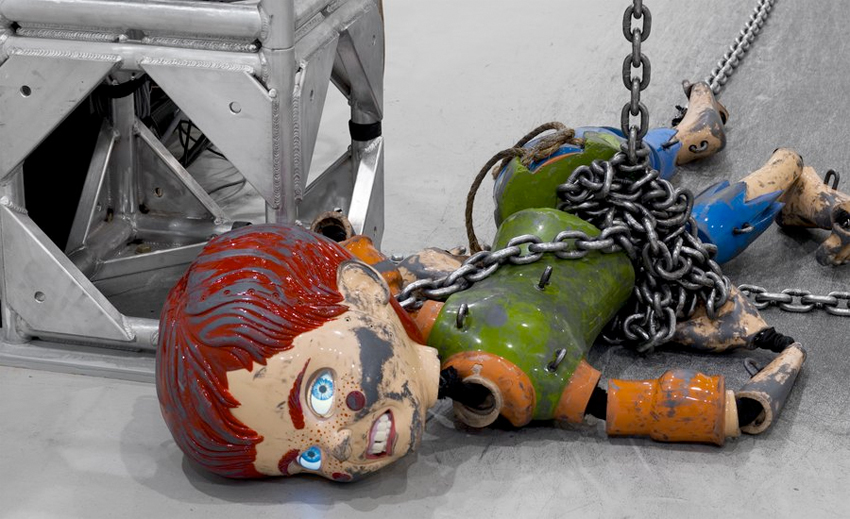 Do you consider your new work participatory?

I don’t think it’s participatory. I think that it’s something that can be contained in the work and felt in the viewer, but I don’t believe that it’s interactive.

It might not interactive but if we’re talking about the audience feeling something, well, I definitely felt something.

Right, definitely! Art is, of course, participatory by default. People are not literally interacting with the sculpture – it’s just the eyes. Through the facial recognition, I’m trying to reach a kind of a high-frequency tension. You could describe that as feeling. I’m trying to maximize that and so it impacts how I pair things compositionally and manifest things formally. The decision on how the eyes work for example was based on what would be the most effective. It’s all programmed; I would say: ‘riiight… there! Close the eyes and have them open’.

It feels there is little difference between your videos and your animatronics. Everything seems to come together in the way you mix sculpture, video and installation.

I think that I was a bit insecure about moving into sculpture. I thought, if I could come into sculpture in an approximative way to how I was working on the videos, then I could work from a kind of experience rather than just jumping in and making a sculpture. This way, I already kind of had a confidence in handling the material.

How much of you is actually there in this work?

It’s 100% me, as an author and as a director. It’s not me as an autobiographer, though – the audience might have trouble drawing the line between my identity and my work but I can say pretty confidently that I’m working more as an author.

One of the works that are shown next to Colored sculpture is an older video from when you were just starting out as an artist. In the video, which is called The Crisis, we see a younger version of you explain why you love art and about your desire and ambitions to make great art.

It was an intuitive choice to include it in the show. Showing this work opened up a spontaneous path to the other works. To me, it’s a way of creating tension or friction between old and new works. The Crisis has a raw energy to me, pure and polluted at the same time. It kind of adds a compositional flavor to the show. It’s not rhyme or reason, it’s kind of feeling it out.

And also, you know, there’s an incredible, alarming narcissism as well. I think the work has a tension between authenticity and satire. It’s quite self-conscious and narcissistic and satirical and even cynical. There’s also an intention of what I believe to be authenticity. 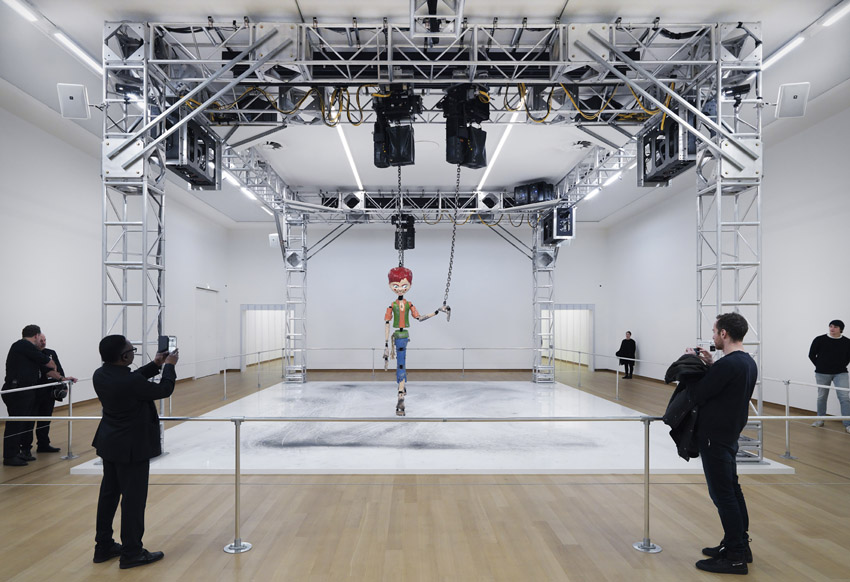 Do you believe you’ve evolved past the cynicism?

Yeah, I definitively evolved, I’m like a renewed individual. I’m still the same guy as the one in the video, but at the same time not really him anymore. That guy’s much more anxious. I think when I was a very young and ambitious artist, my priorities and my intentions were really lined up. It was so much about breaking into the art world and the desire to be recognized. Things like that, you know, in combination and intention with my obsession and love for art. So now I have my agenda and intention in line with just making art. It’s more a liberated practice. It’s not so much about the professional success as it is about the success of being free to simply manifest these ideas I have.

That’s very nice to hear. What are you working on right now?

I’m working on a new work for the Whitney Biennial and I have a show at Sadie Coles in London with new work – a new video and some new sculptures, as well as…relates back to Colored sculpture, tangentially.