A guide to Brussels Gallery Weekend 2017

For the tenth time already, the galleries of Brussels are organising a joint Gallery Weekend as a festive opening of the new season. With 49 locations in the official program of Brussels Gallery Weekend – and even more exhibitions and events taking place in the off-program – it’s impossible to see everything in a weekend. We’ve selected some shows that we are excited about and think you shouldn’t miss. We mapped out a tour with 15 stops, starting uptown and conveniently working its way downtown.

Perpetual Construction: A dialogue with the house of Jean Prouvé III 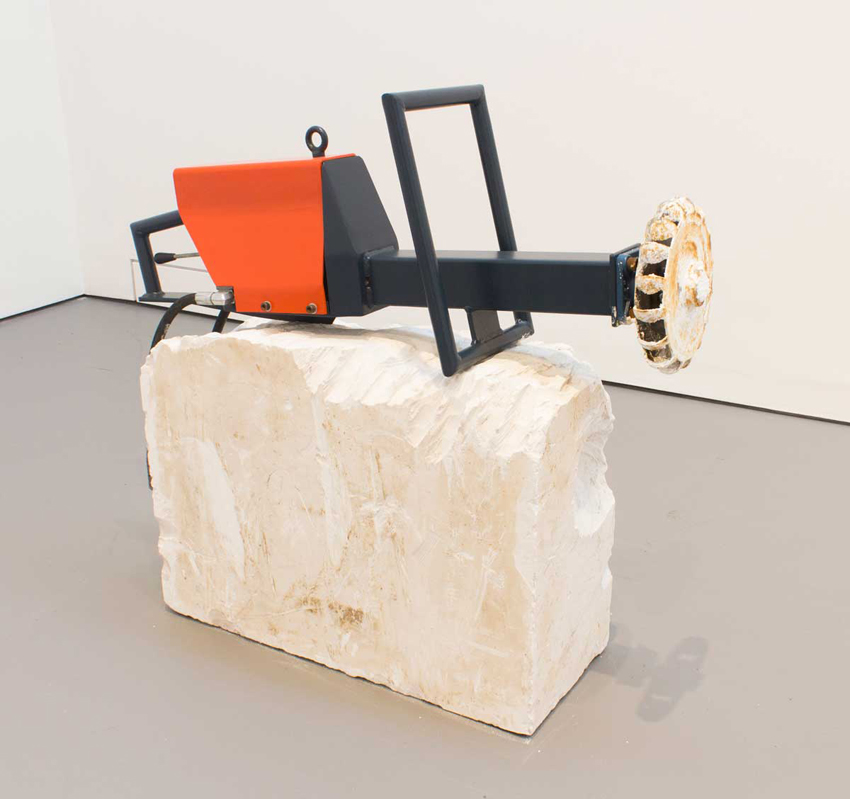 Thu Van Tran – Mountains are like the bones of the earth. Water is its blood.

For her third solo at Meessen De Clercq, Thu Van Tran presents  Mountains are like the bones of the earth. Water is its blood, an exhibition bringing together film, photographs, sculptures and large tarps. This group of new works raises a series of post-colonial questions around the French occupation of Van Tran’s native Vietnam. Central to the show are a series of different tarps depicting large prints of European landscapes – used to shield construction sites in the centre of Ho Chi Minh City – and a group of colonial sculptures which are now in the tropical gardan of Paris. The work of Thu Van Tran was one of the highlights of this years Venice Biennale, so be sure to go and see this show.

Ariane Schick – I Made You To Find Me 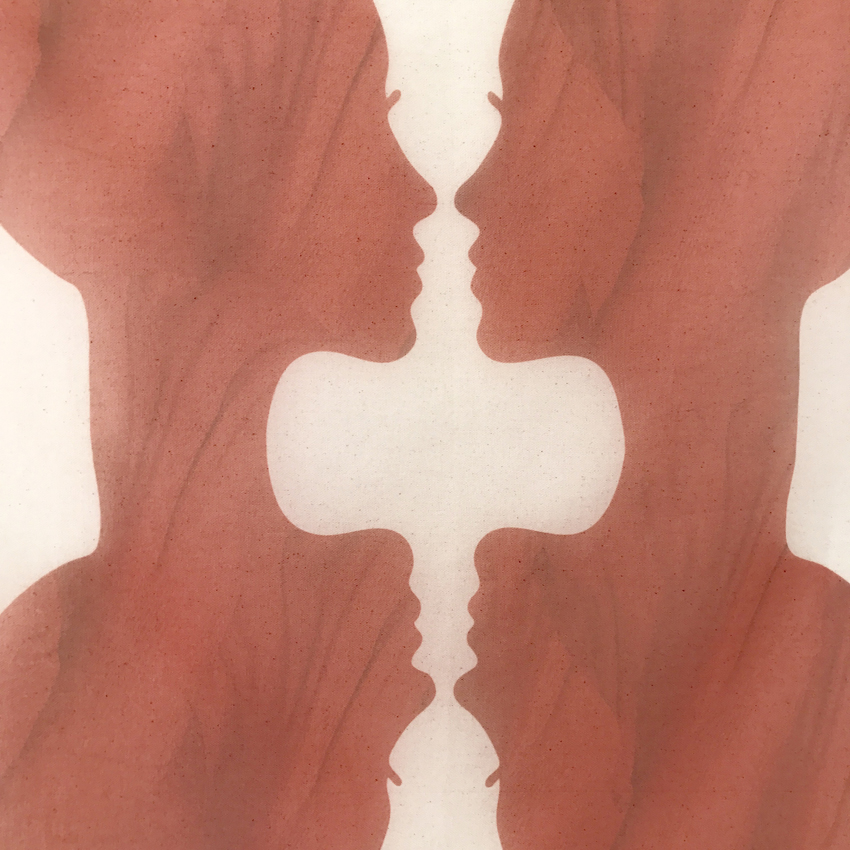 Technically speaking not a gallery in the official Brussels Gallery Weekend, but a very interesting artist nonetheless. Ariane Schick is presenting three new bodies of work that investigate narrative, in multiple iterations, for example; historical, fictional, mythical, personal and national. Through the work, she considers narrative as a layered medium, using it as a tool and as a subject, when thinking about what societies and individuals believe. What they love and hate. She looks at it as a polymorphous belief generator in a state of flux; moving through space and time to nest in the imaginations of people or a society.

Sanam Khatibi – Rivers in your mouth 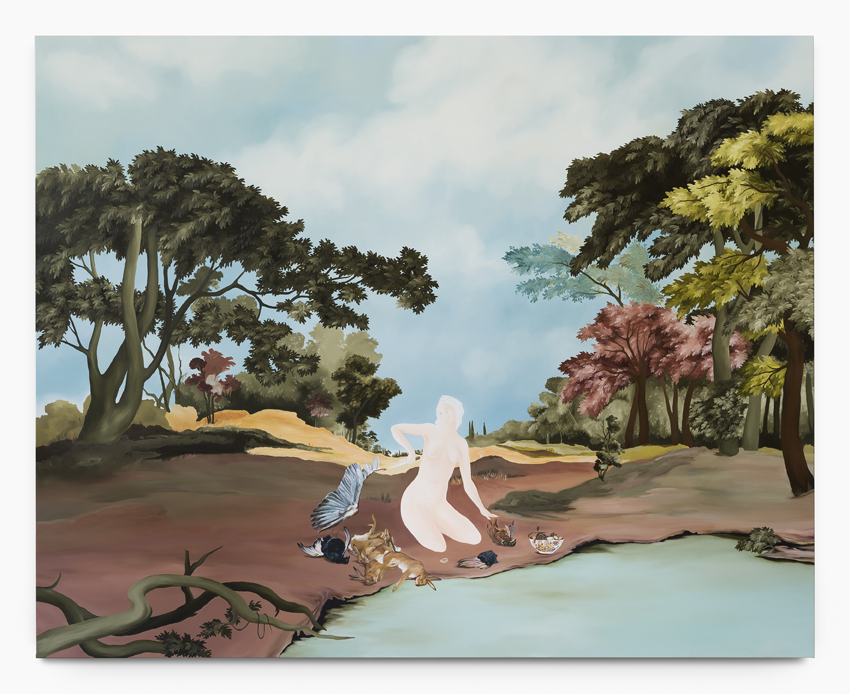 For her first solo exhibition at Rodolphe Janssen, Sanam Khatibi present two large-scale paintings, a large tapistry and a series of smaller works, all interrogating our relationship to power structures – specifically the duality between triumph and failure. Her naked female portagonists inhabit alluring, Arcedian landscapes in which the male counterparts are represented by animals – deer, crocodiles, snakes or lions – being ridden or skinned. Both  are ambiguous within their relationship to power, violence, sensuality and each other. Khatibi instinctively highlights the thin line that exists between fear and desire, and how closely they are interrelated. As you might remember, Sanam Khatibi made our sixth Billboard Series. Visit this show to see more of her brutal and seductive world. 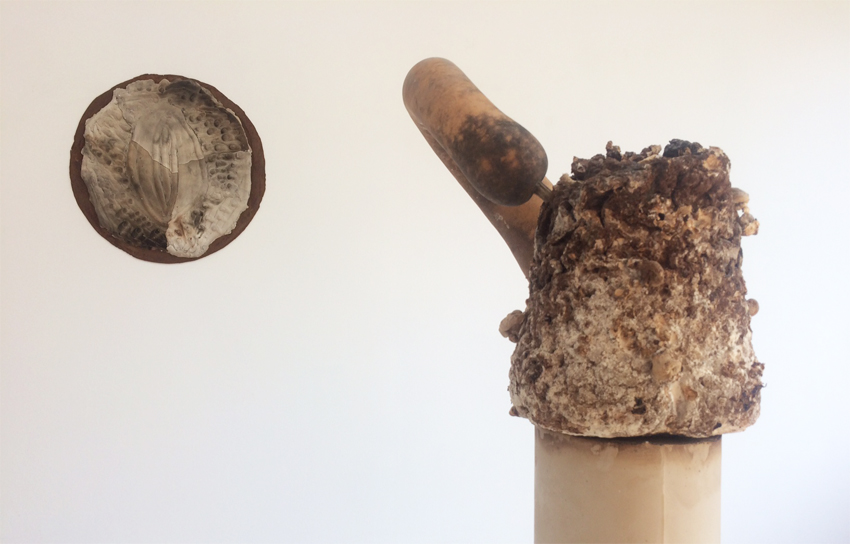 While technically this gallery is also no part of the official Brussels Gallery Weekend, they are based in Brussels and open the season with a truly amazing artist. Martin Belou shows a series of new works that convey imagery of Shamanism, Alchemy or other pre-scientific systems of thought and knowledge. Think masks, seeds, fire, mushrooms, fertility, smoke, etc. Titled after the place where Belou has his studio, the exhibition not only functions as a logbook of what the artist produced, but also as a stage where objects are rearranged and orchestrated to embody a ceremonial and spiritual environment.

Martin Belou will make our newest Billboard Series in October. Keep your eyes open for his immersive project, which he’ll create in collaboration with the students of Sint-Lucas, Ghent. 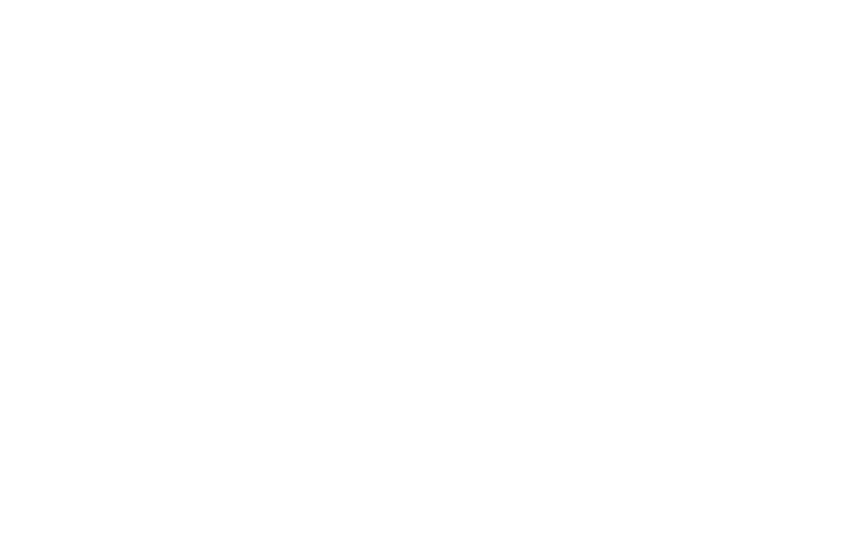 This is the gallery’s first show with works by the recently deceased Dutch conceptual artist stanley brouwn. His practice deals with everyday human activities, of which the covering of distances, the moving from a to b, is one of the most essential. brouwn uses his own subjective units of measure (the sb-foot, the sb-ell and the sb-step) and sets these against the universally adopted metric system. In other works, brouwn measures existing buildings and marks their sizes on paper or confronts an existing space with a specific unit of measure. During his life, the artist didn’t want photographs of himself or his works to be published. He also didn’t shared biographical data or give interviews, as he found that such information detracts from the work itself. When checking with the gallery what they would shown and if they had an image they could share with us, we received the following message: “we won’t use images nor press text for stanley as he had never wanted it. One needs to come to see the works!” We would strongly advise you to do so. 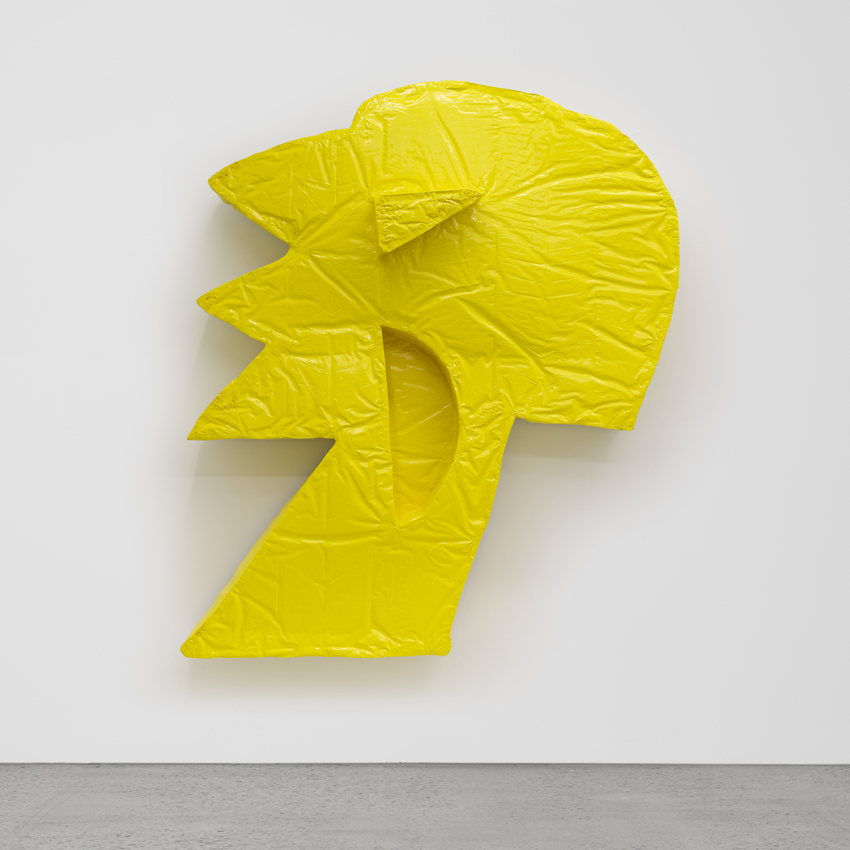 Sorry We’re Closed presents for the first time the work of NY-based artist Daniel Boccato. Boccato starts with the outlines of objects and reuses these found shapes to create monochromatic sculptures in fiber glass and epoxy. Freed from their initial context and devoid of narrative, these colourful hard-edge sculptures vaguely recall the forms which inspired them – like an eerie déjà vu. Aesthetically caught between pop-art and minimalism, these abstract forms could be perceived as an extraction of a reality resisting representation. 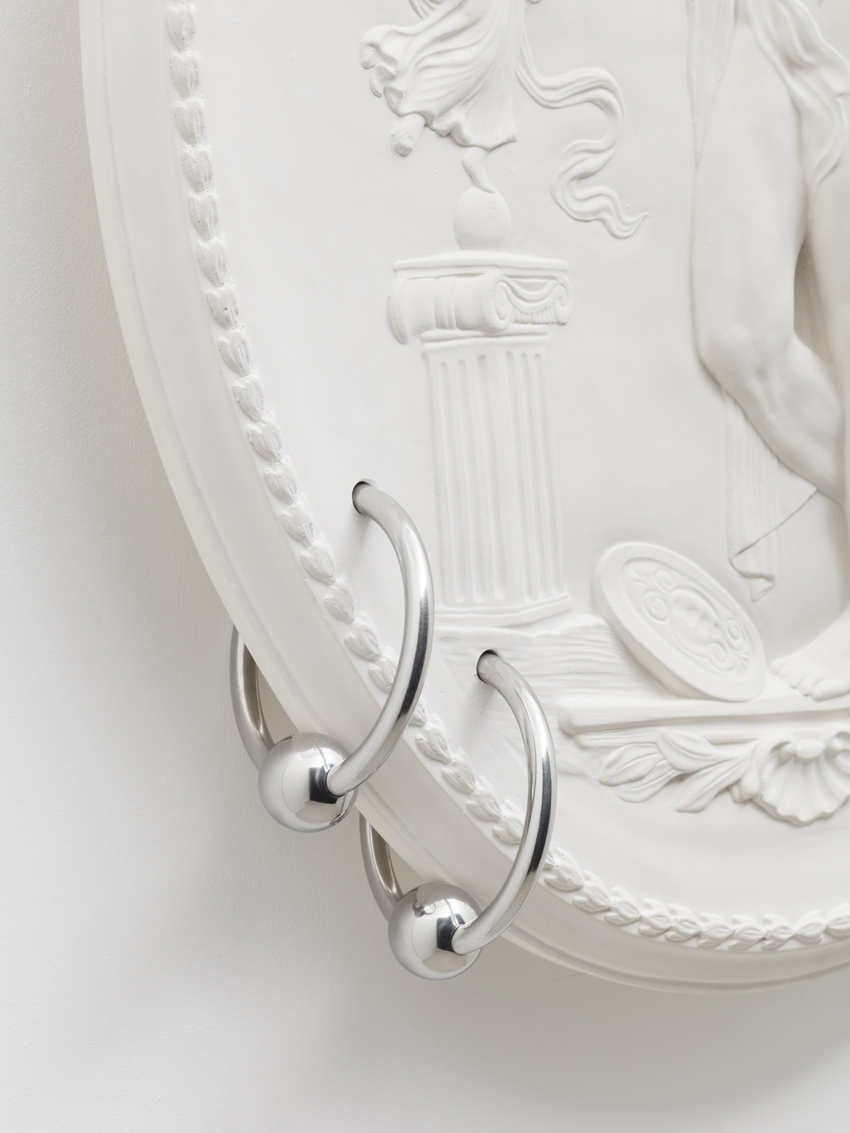 For his first solo exhibition in Brussels, Prem Sahib occupies the gallery’s two floors with installations and sculptures that utilise different materials, many of which are found in the interiors and exteriors of public spaces. The title of the exhibition Heron references a bird commonly found around park lakes. As a starting point, Sahib draws a parallel between the bird’s observant and stealthy nature and the practice of cruising. In an attempt to explore the sense of unnoticed presence, the artist has made interventions within the gallery that encourage the viewer to consider the interior and surrounding architectures. The exhibition questions the body and its aesthetic limitations, using objects and architecture as a space of representation. Such limitations flirt with the latent sexuality present in Sahib’s works, its relationship to the act of observing, the cult of forms and the responsibility of absence 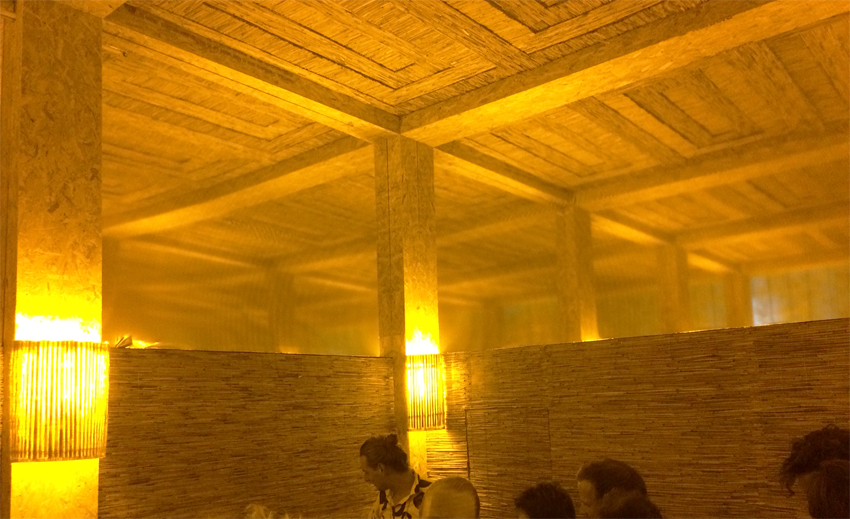 Two years ago the four artists met during a residency at the Los Angeles outpost of the Vienna-based MAK Center. At the back of the residency – in the garage of the midcentury architect Rudolph Schindler’s 1939 Mackey Apartments – they built a 0.65:1 scale replica of Adolf Loos’ famous American Bar in Vienna. Thought of as a social sculpture – a physical work of art that facilitates social interaction – Los Bar functioned as an actual bar, which drinks and performances. From the beginning of September through the end of October, the group is adapting a new version of this project for the basement space of Etablissement d’en Face. Rather then simply revisiting the same idea of translating Loos’ American Bar, they start their project in Brussels from the basement under American Bar, where from 1951 to 1953 Strohkoffer was located. Strohkoffer – named after its wall cladding wicker mats – was the first project space in Vienna. Their Strookoffer is an playful mix of the original exhibition space and the parenting bar, built in a scale of 1.44:1. During the exhibition period, the artists will keep on working in and extending the bar, planning to even break through the wall to include adjacent spaces. 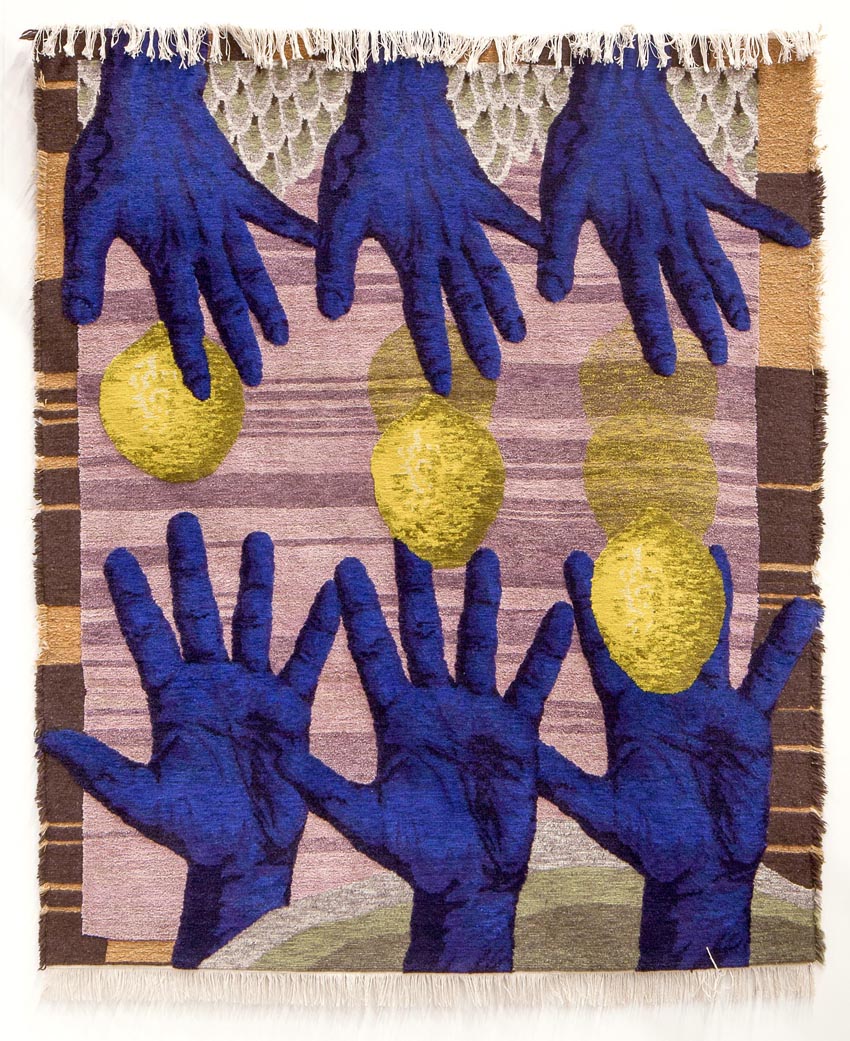 Maniera commissions architects and artists to develop functional objects in limited edition, deliberate searching for collisions between the realms of architecture, design and art. For their newest series – number 15 already – Maniera works with textile designer and artist Christoph Hefti. Hefti’s love for crafted textiles has taken him to Nepal, where he designed and developed his own series of hand-knotted rugs. During his visits to Nepal, Christoph Hefti rediscovered the direct interaction between the designer and the craftsman and became fascinated by the use of traditional crafts in a contemporary context. He approaches the mystical and even spiritual tradition of storytelling textiles through his very personal yet worldly themes. During the Brussels Gallery Weekend, Maniera presents eight new large rugs – some abstract, other narrative – inspired by magic realism.

Office Baroque’s downtown space combines work by German-French surrealist Hans Bellmer (1902–1975) with two young US-based contemporary artists, Sascha Braunig and Matthew Ronay. Bellmer is primarily known for his photographs of a sculptural work that he called La Poupee – a female dummy made up of modular limbs and anatomical parts that could be assembled and reassembled in various ways. Sascha Braunig’s illusory and vibrant paintings blur the line between figure and abstraction. Her work reflects upon illusion and the surface of the represented subject – often humanoid forms. Matthew Ronay’s sculptures meld vocabularies of modernist abstraction and ritualistic objects, drawing on traditions of non-Western art making, folk and pre-avant-garde art, as well as surrealism, mythology, and psychedelia. 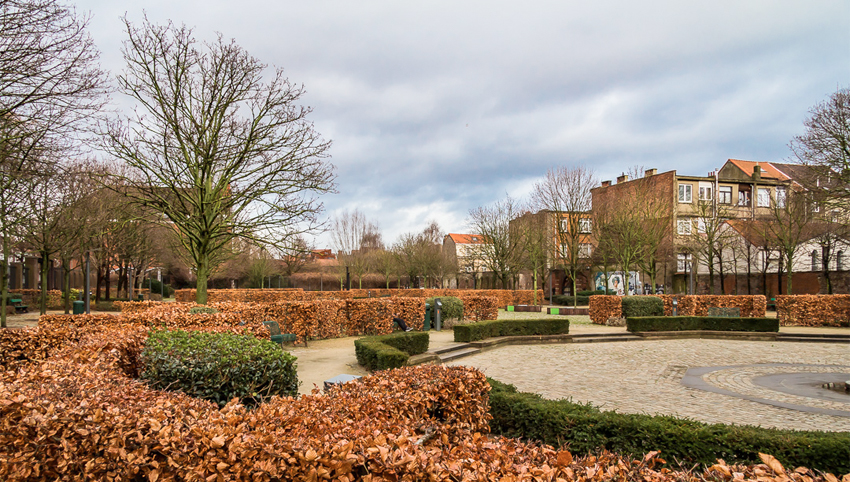 We are more then excited about Komplot’s newest project: a sculpture park in Molenbeek. This temporal sculpure garden is mounted in Le Parc de la Fonderie (just behind MIMA) – a park founded in 1991 on the grounds of the largest foundry in the district. Remnants of the foundry give the park a flair of an industrial archaeological site, now appearing as an empty museum. Together with Toke Lykkeberg, Komplot brings work by 10 artists around our the bio-technosphere we’re currently entering where technological and biological processes are fast paced and unpredictable. At a time when climate change and technology are remaking our planet and habitat at exponential growth rates, biosphere and technosphere merge in a manmade world beyond man’s control. 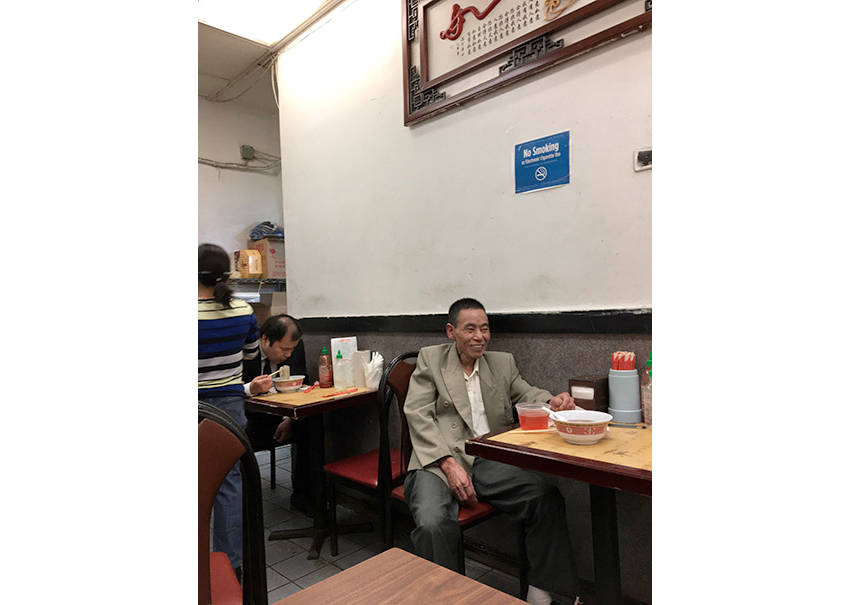 We know nothing about the upcoming Michael Krebber show at dépendance. The communucation image – a portrait of the man living below Krebbers Chinatown studio – doesnt offer much info either. However, when such an influencial artist shows new work in Brussels, you just need to go and see it.  For those unfamiliar with his work, Krebber explores the medium of painting – with a conceptual approach. Using the briefest of gestures and brushstrokes, Krebber often declares a work complete at the first available opportunity. Believing that there is now little new that can be done with painting, Krebber is engaged in the medium’s endgame, playing the final moves again and again without ever reaching its conclusion. 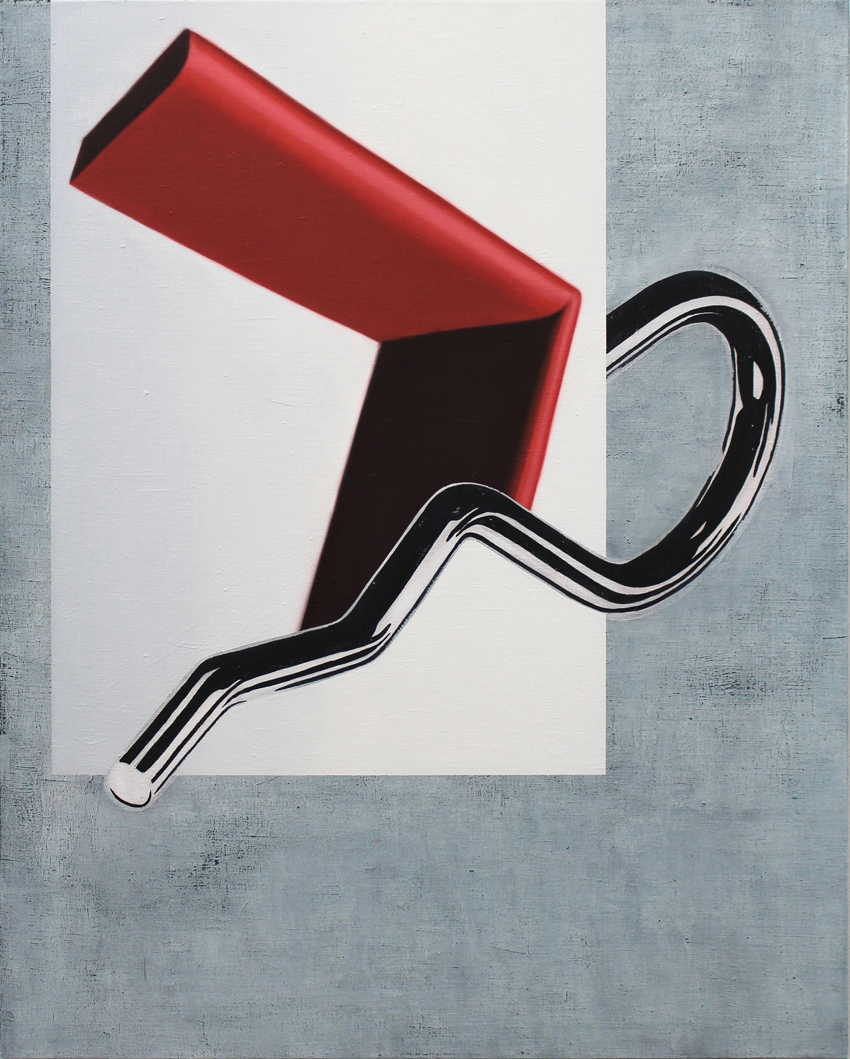 Anne Neukamp’s work is characterised by image worlds that move freely between figurativeness and abstraction. Her visual language lets you discover familiar forms, beginnings of well known objects and figures that at the same time become part of a transformation into a seemingly recognisable visual invention. The motifs and elements Anne Neukamp uses in her work derive from our everyday decor, the image archive of the consumer society: icons, punctuation marks, digital 3D models and clip art, etc. Neukamp’s second solo exhibition at Galerie Greta Meert is titled after Magritte’s 1928 painting Les Objets Familier. Her work relates to Magritte’s surrealist approach to the unconsciousness by questioning, exploring and reconstructing the meaning of symbols in our world. 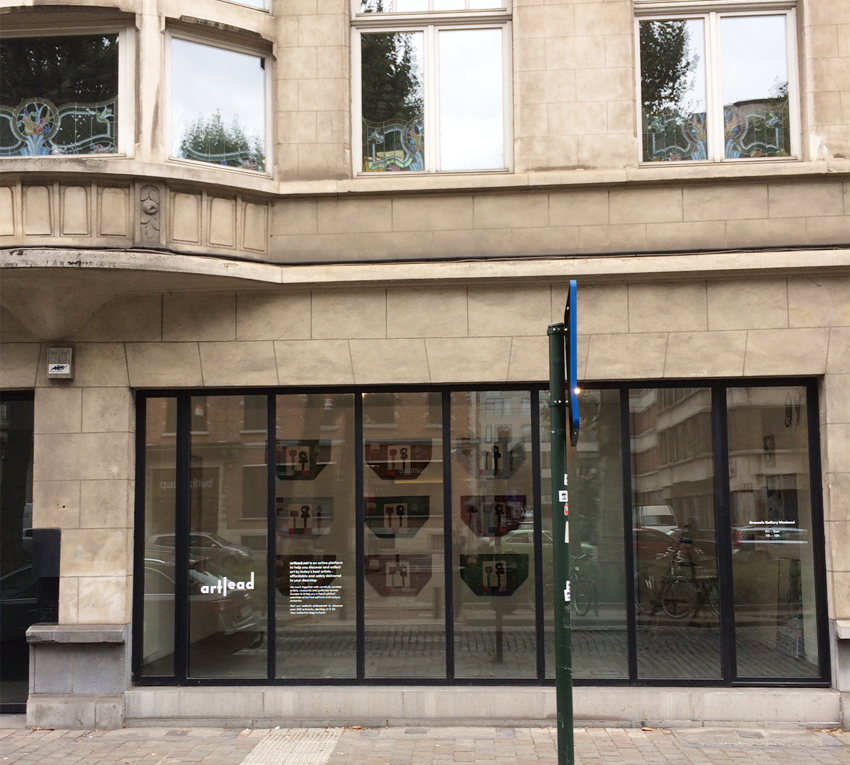 Be sure to also pass by our very own temporal space! During the Brussels Gallery Weekend, we have a pop-up space where we present Nel Aerts brand new Billboard Series edition in combination with a large (never shown before) painting celebrating the artist’s birthday. Nel Aerts’ edition develops further on the most recent watercolour she painted for our latest billboard series, but translated to a series of ten unique textile works. We also show a selection on editions from our website and preview some new editions that will be featured on the website in the coming weeks. This pop-up also acts as the official downtown Brussels Gallery Weekend info point. Drop by for a chat, an official Brussels Gallery Weekend map – or if you need some help navigating the map and planning a walk.