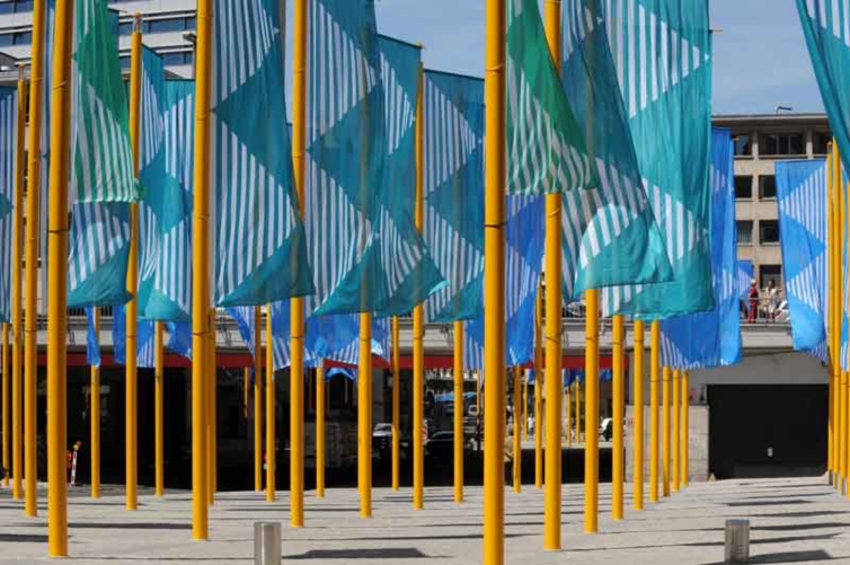 Perhaps you are one of the many passerby who each day cross Place de la Justice in Brussels without paying much attention to the artwork that embellishes the square. Although hard to miss, it is easy to mistake Daniel Buren’s Blue on Yellow for municipal or business flags and overlook the work of art. Still, Blue on Yellow is a major example of conceptual art in public space.

The artwork by Buren was inaugurated together with the opening of the new Place de la Justice in June 2009. Blue on Yellow consists of 89 yellow masts carrying a blue-white flag. The masts have different heights (between 8 and 12 meters) because of the differences in the ground level, but reach the same height. This artwork is one of Buren’s many permanent in situ works integrated in public space. Buren is famous for his use of white and coloured stripes. But how became this pattern the artist’s signature and why does he repeat it endlessly in his oeuvre?

In 1965 Daniel Buren was browsing for canvas at Marché St. Pierre in Paris when he came across a striped awning fabric with vertical stripes, each 8.7 cm wide, alternately white and coloured. Buren used the fabric initially as support for his paintings, but he soon confined himself to the use of white paint, with which he suppressed the stripes at the borders of each painting. By 1968, he had freed the canvas from paint completely. From then on, the artist uses his striped canvasses to point to the context of the site in which it is displayed. The stripes were also applied in different materials or directly on the surface of buildings, floors, doors, streets. For Buren, the engagement of art is crucial: “Each form of art is political. Therefore, we have to investigate both the formal and cultural context (not one or the other), because art exists and develops within these contexts.” Buren had as a representative of an emerging conceptualist position a clear focus on institutional critique and wrote important critical texts on the museum as institution. 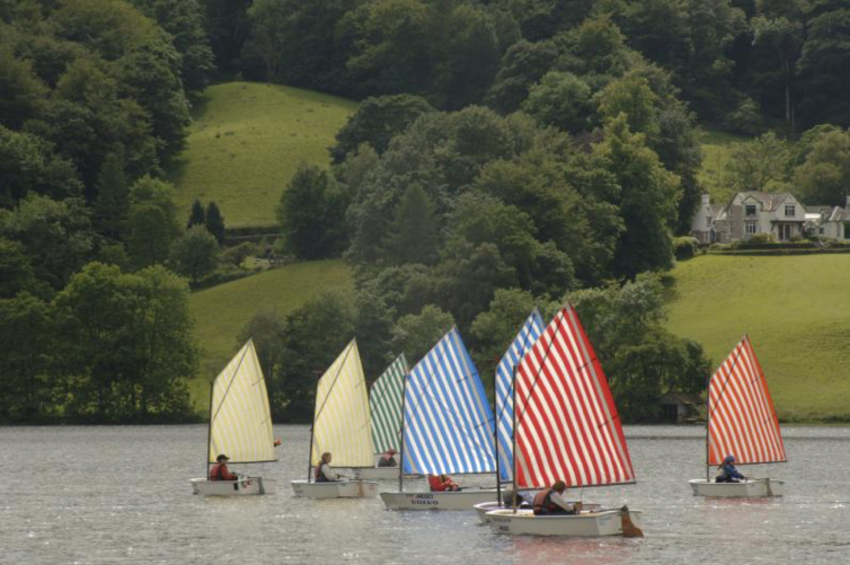 Over the years Buren installed his work inside museums but also frequently outside of the institution’s walls: in shop windows, on busses and trams, buildings, on billboards and other spaces for advertising. Even on sailboats. In doing this, Buren attempts to affect the boundaries between studio, gallery, museum and the outside world. By showing his identical canvasses almost literally everywhere, he wants to point out that an object is never isolated, but is always colored by its context. His works draw attention to the architectural and contextual characteristics of its surroundings. The white and coloured lines escape the exhibition space onto the streets and Buren asks himself and the viewer: is the artwork on the street as much an artwork as it is in a museum? When becomes art merely street decoration?

Buren’s work often acts as a catalyst to draw attention to ordinary situations in the everyday life. As these motifs are present in the Blue on Yellow dominating the Place de la Justice in Brussels, it is interesting in what way the work achieves the artist’s intentions. The installation absorbs it surroundings but it also works the other way around; it creates a situation in which his intervention and the existing environment become mutually dependent. 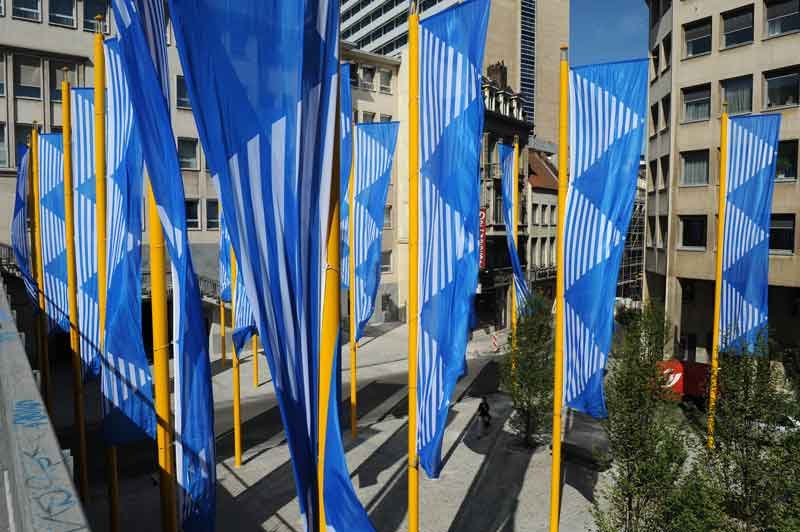 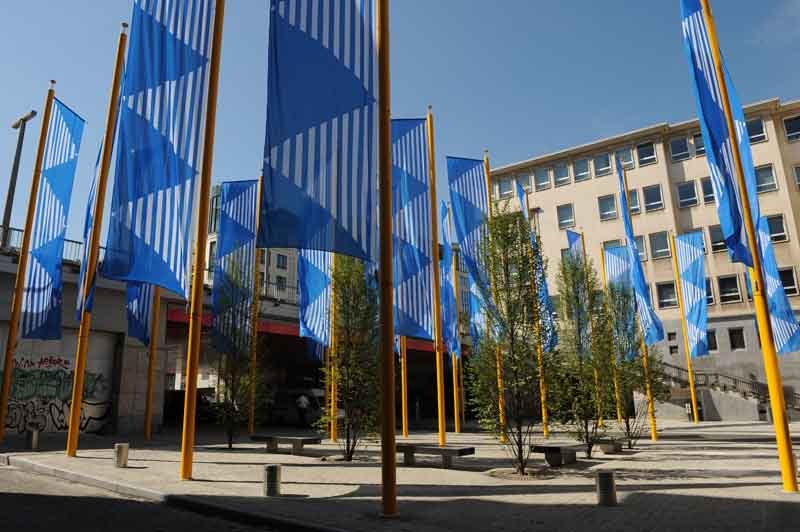 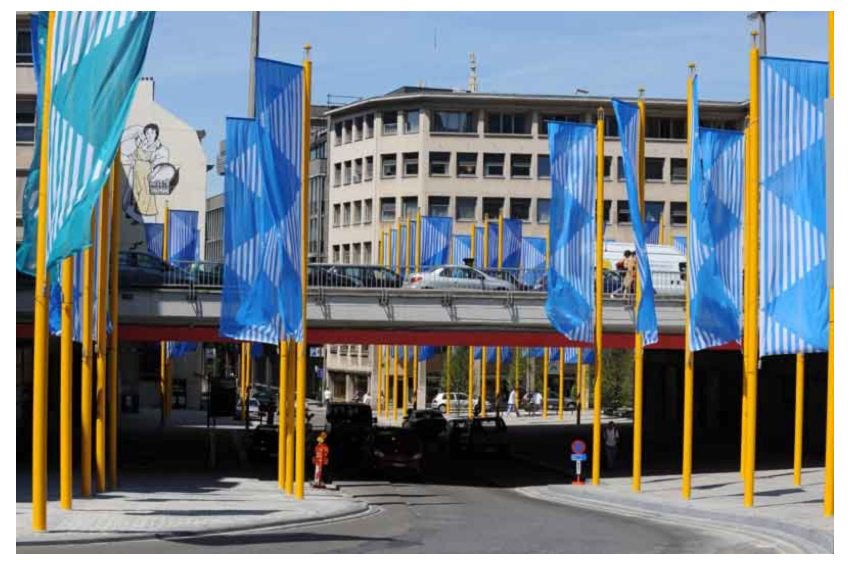 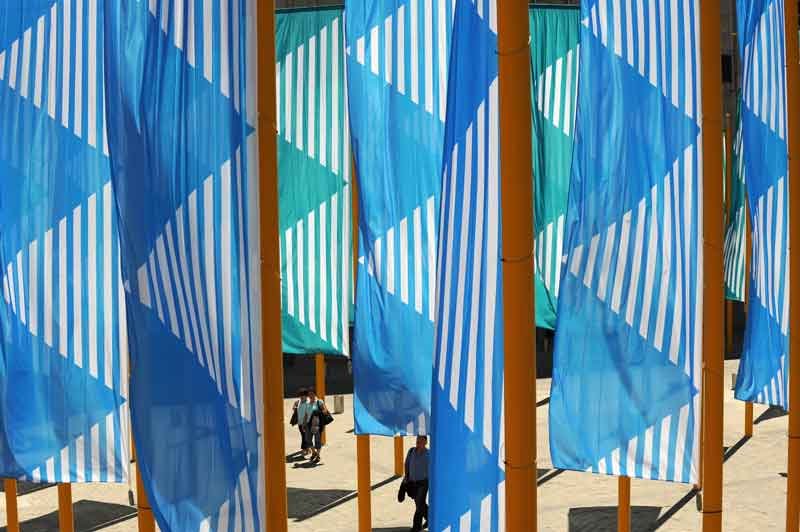