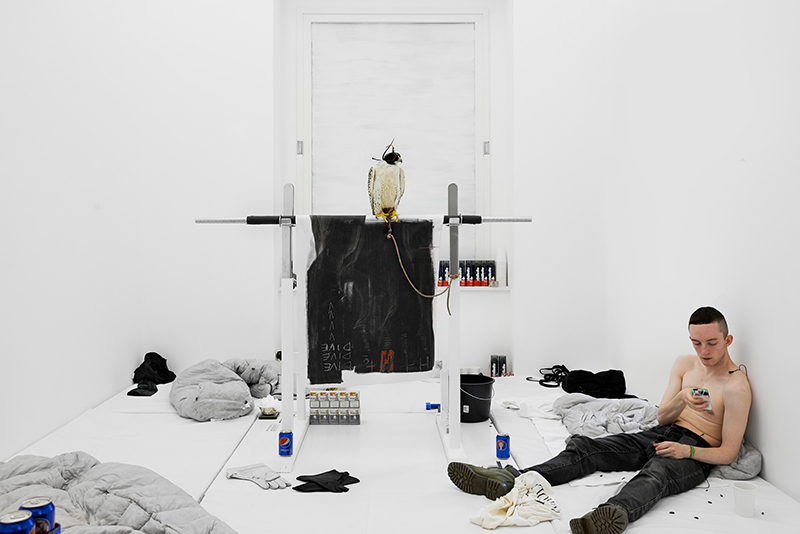 Painter, performance artist, and sculptor Anne Imhof mixes subcultural references with an almost ceremonial rituality, and an extreme conception of the experience of time with a filmic sense of image construction and framing. Her newly commissioned Angst evokes the gestuality in Robert Bresson’s films (in particular his majestic Pickpocket of 1959),the coded languages of doormen at the legendary Robert Johnson nightclub in Offenbach, where the artist once worked, and the task-like movements of New York’s historic Judson Dance Theater. Borrowing, extending, and revising the terms of each of these references, Imhof uses a combination of meticulously scripted protocols and deliberate improvisation to determine her performers’ actions.

Angst, which premieres at Kunsthalle Basel, is an exhibition-as-opera made up of a multi-part performance, a musical composition, paintings, and sculptural elements that are alternately activated or still. Imhof turns the capacious upstairs gallery into a strange sort of sports training facility, where over the course of its first ten days, her exhibition-as-opera progressively unfolds through the incremental appearance of its different “characters.” Then comes their incremental disappearance: once the last of them has departed, their actions and inhabitation of the space persist via the continued presence of sculptural elements and paintings.

Descriptions of Imhof’s work tend to focus exclusively on her performances. And it’s easy to see why. They are transfixing—peculiar and mesmerizing reflections on human agency, interpersonal communication, power dynamics, and the secret codes that bind them. But the extraordinary charge that makes her work so compelling resides just as much in the way she scripts her intricate choreographies in relation to a cosmos that can only impudently be called a backdrop. Not merely scenography, and also not props for the performances or material traces of its existence (although they sometimes act in those functions, too), her objects are paradoxically both autonomous and operational—standing on their own but also structuring the relationships and movements of performers and viewers.

To speak of Angst, one must thus speak of visceral paintings and sculptures, arrangements of light and sound, as well as conglomerations of readymade consumer goods. Leather padded sports mattresses lie at the entrance to the exhibition and in a back room as if waiting for bodies to wrestle, rest, or exercise upon them. A series of elongated, leather-covered punching bags embossed with erotic images and marked with wound-like gouges dangle like uncanny appendages from the ceiling or walls,ever so slightly swaying. A central, resin-lined sculpture serves as a pool, a trough, and a meeting point of sorts for the performers and is filled during the performance with whisky and water. Set into the floor around the edges of the space are shallower troughs filled with milk during the performance, and empty for rest of the exhibition period. Metal rails of the kind that might direct the movement of a factory machine or an attached livestock animal are affixed to the walls along the threshold between the main space and a backspace. Near them, a polished metal structure that evokes an opera balcony or loge sits as an obstacle; it is an object meant to shift perception and positions, since, depending on which side you stand on, you are either on the “loge” looking out or part of the spectacle to be seen from it.

On the walls, new large-scale paintings made before Angst fully existed as such foretell of the movements and gestures that would be part of it. The canvases picture the figures of the Lover and the Clown, their life-size bodies standing, gazing, gesturing, or shaving odd parts of the body (a palm, a navel), surrounded by some of the branded commodities that they wear or use in the performance (Pepsi and Coca-Cola cans, tennis shoes with Nike’s recognizable “swoosh” logo, Merkur Solingen razors). Painted in cold, muted shades, their tones bring to mind bruised or sickly skin, while painted leather patches collaged to their surfaces echo the emphasis on skin elsewhere in the exhibition, as in the animal skin of the punching bags, or the gesture of showing skin in the performance. In the back rooms, three of Imhof’s large lacquered steel and aluminum “scratches” are built from successive layers of paint whose underpainting is revealed through a sgraffito process; it is impossible to look at them without imagining the violent gestures that made the incised marks (one can almost feel the action of a key held firmly in hand as it scratches a car). The smaller, more intimate back galleries house sculptures made from a combination of sporting equipment and swaths of painted leather made into stands for the falcons that figure in the performance. The entire ensemble, at once unsettling and strange, forms a spectacular backdrop for the bodies that circle within it during the performance, while also functioning as a proper exhibition when the living elements are absent.

For the period of Angst’s performance, Imhof’s various characters enact a choreography of cryptic signs and gestures “found” in real life, for instance distractedly looking at the screens of their smartphones, an act so ubiquitous in contemporary culture that one might wonder if it is scripted or a blasé interruption. In other moments, the performers embody and distort the runway walking one might recognize from fashion shows, accelerating or suddenly rendering still the characteristic postures and poses. Throughout, the performers take their places so as to form a pre-determined image, only to undo it by moving to position themselves for the next one. They also use arbitrary measures to determine how long to hold any one pose. Imhof trains her performers to make decisions based on entirely personal criteria: hold a pose until you are bored with it, or move in a certain way until it feels like the appearance of the gesture is pathetic or ridiculous and then push on further past that point. Of course, when one actor does so, his or her decision then impacts the group, shifting the fragile equilibrium that keeps everyone’s movements related to the scripted images.

As is usual in Imhof’s pieces, the performances are studded with friends, colleagues, and alumni who trained with such choreographers as Anne Teresa De Keersmaeker or William Forsythe. Some of them look like fashion models; some actually are fashion models, occasionally walking the runways for the likes of Balenciaga. What they look like is as important as what they wear and how they do what they do. The performers speak recurring, enigmatic lines such as, “I just put my hand up for fun,” or “Angst, come on.” They have names like the Lover or the Spitter, the Diver or the Clown. But do not expect clear character development or narrative; Imhof’s characters are without character, per se. They are attitudes or sensations rather than fully rounded psychic beings. The performers’ actions do not tell an actual story, but communicate by working within and around and sometimes even against Imhof’s highly codified movement lexicon. Questions of agency and control, power and repetition, illicit transactions and human currency, thread through this piece, as in so many others in Imhof’s oeuvre.

It should be said, Imhof does not perform herself in Angst. Instead she uses cell phone text messages to comment on the action and send directives while it is taking place. But true to her piece, in which agency is a prerequisite, it is up to the performers to heed her instructions or, simply, ignore them. Power, you see, is in the hands of those who seize it.

Angst at Kunsthalle Basel is the first part of an opera in three acts, whose later acts will b eexhibited at the Hamburger Bahnhof, Berlin from September 14–25, 2016; and at La Biennale de Montréal from October 19–30, 2016. 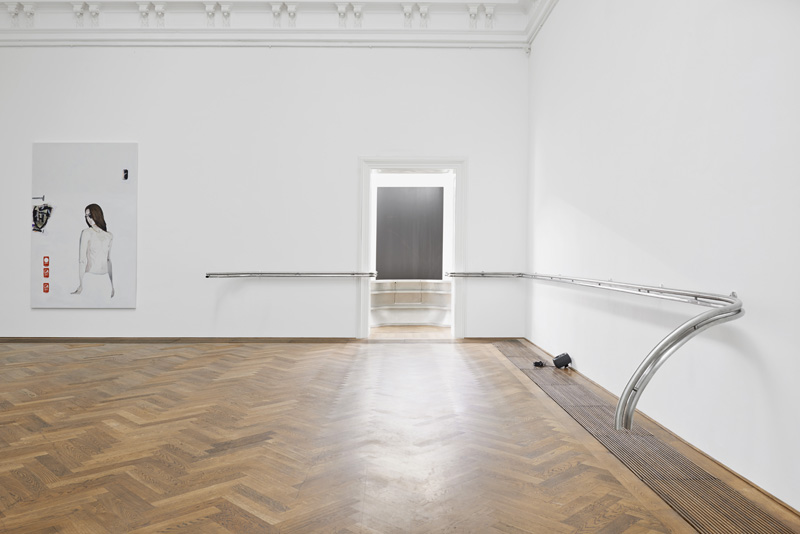 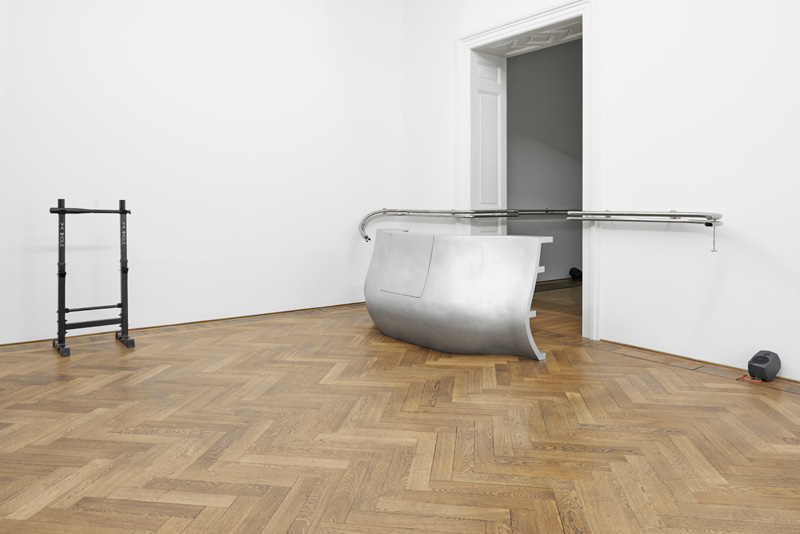 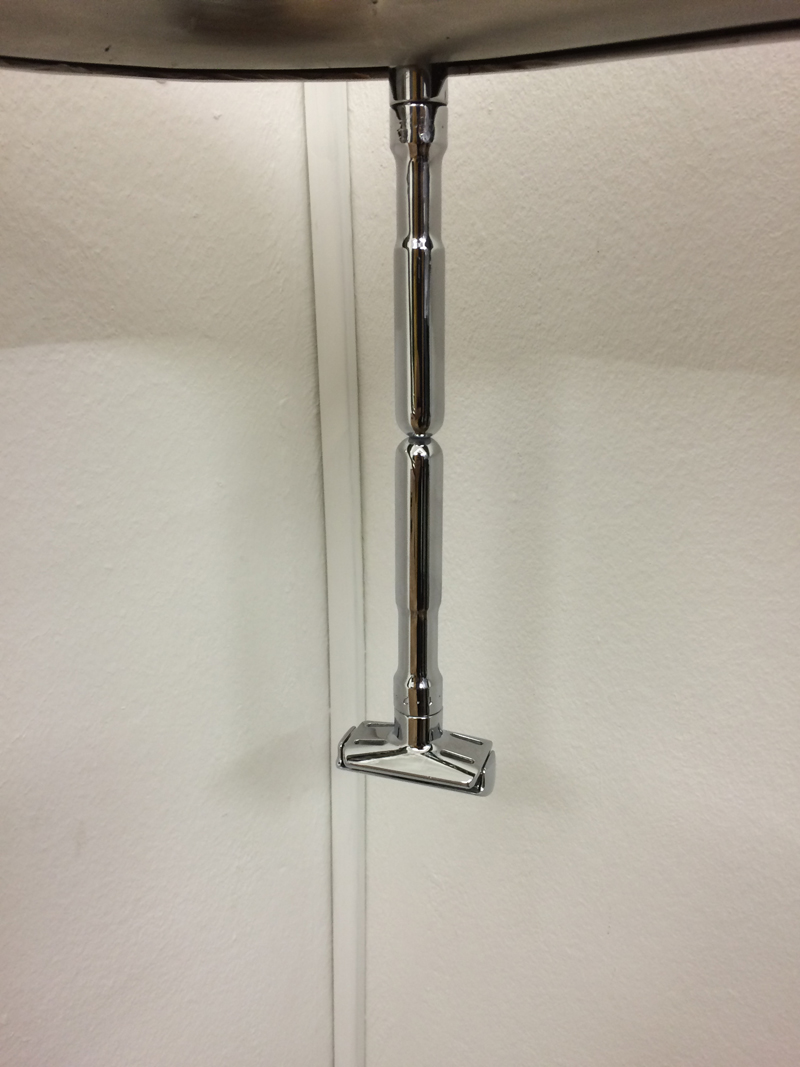 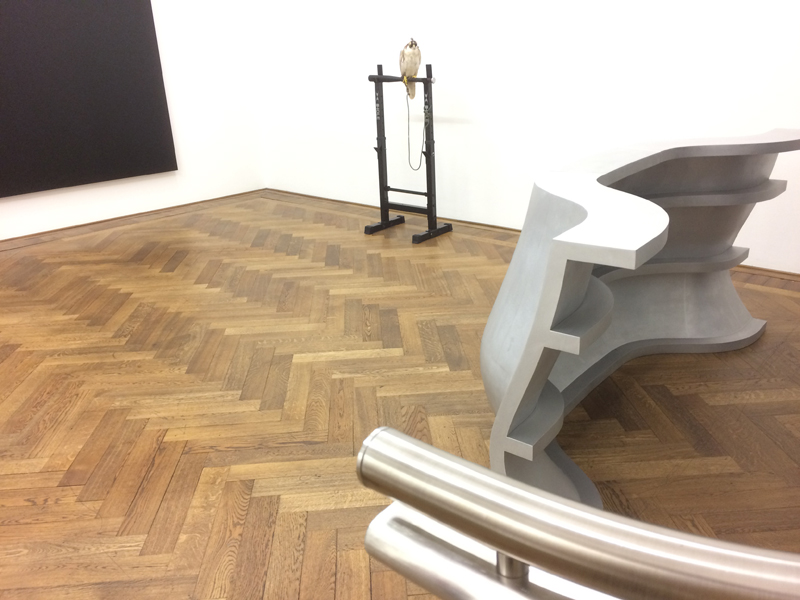 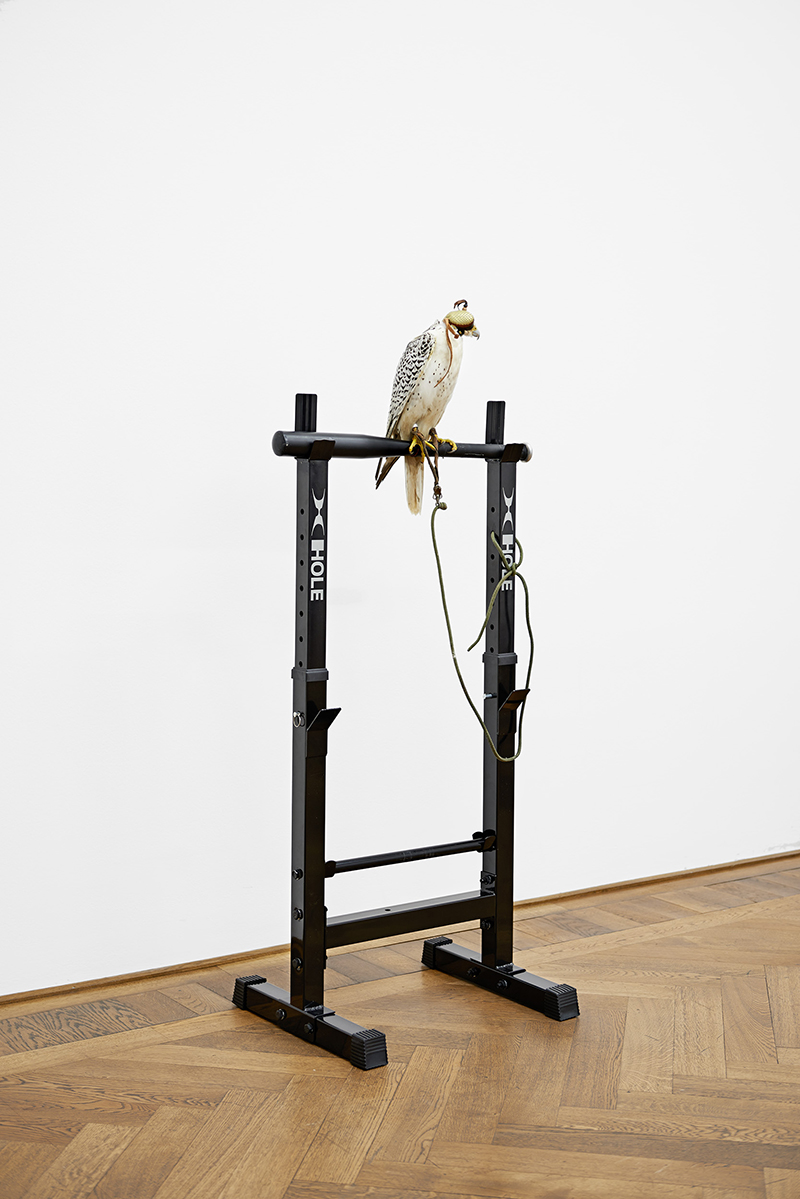 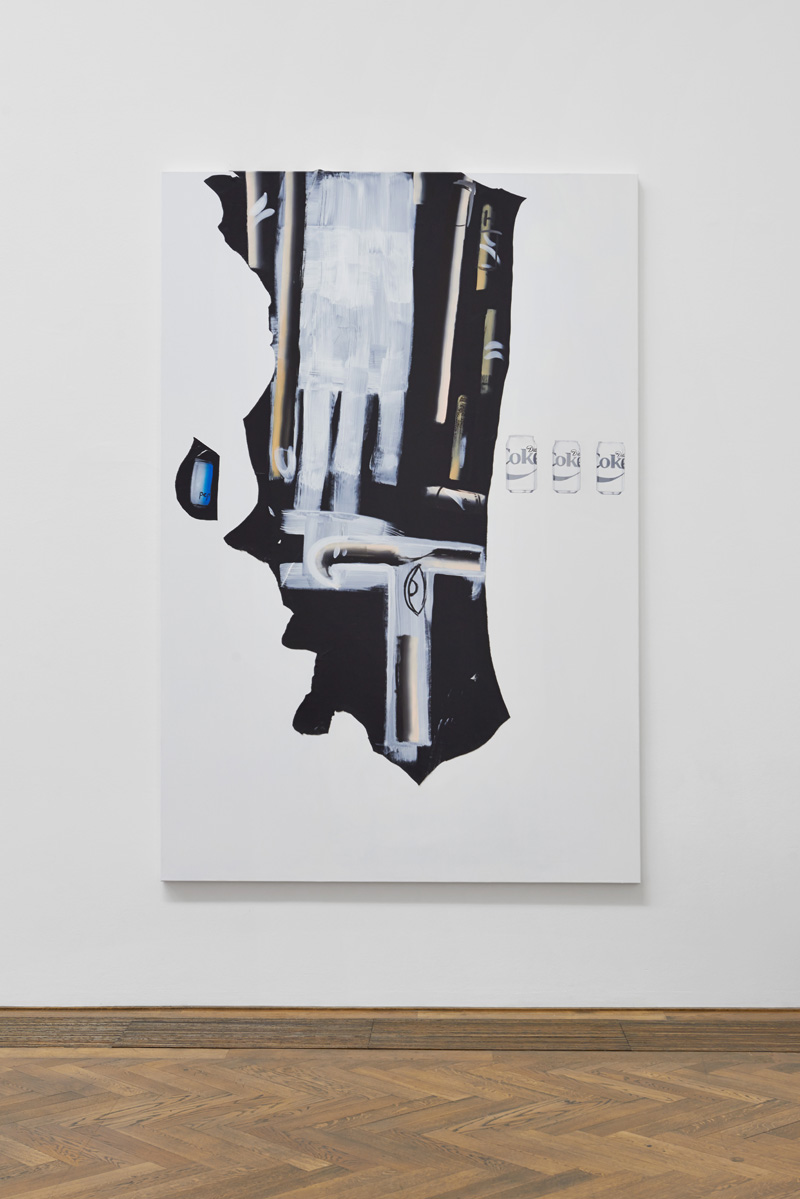 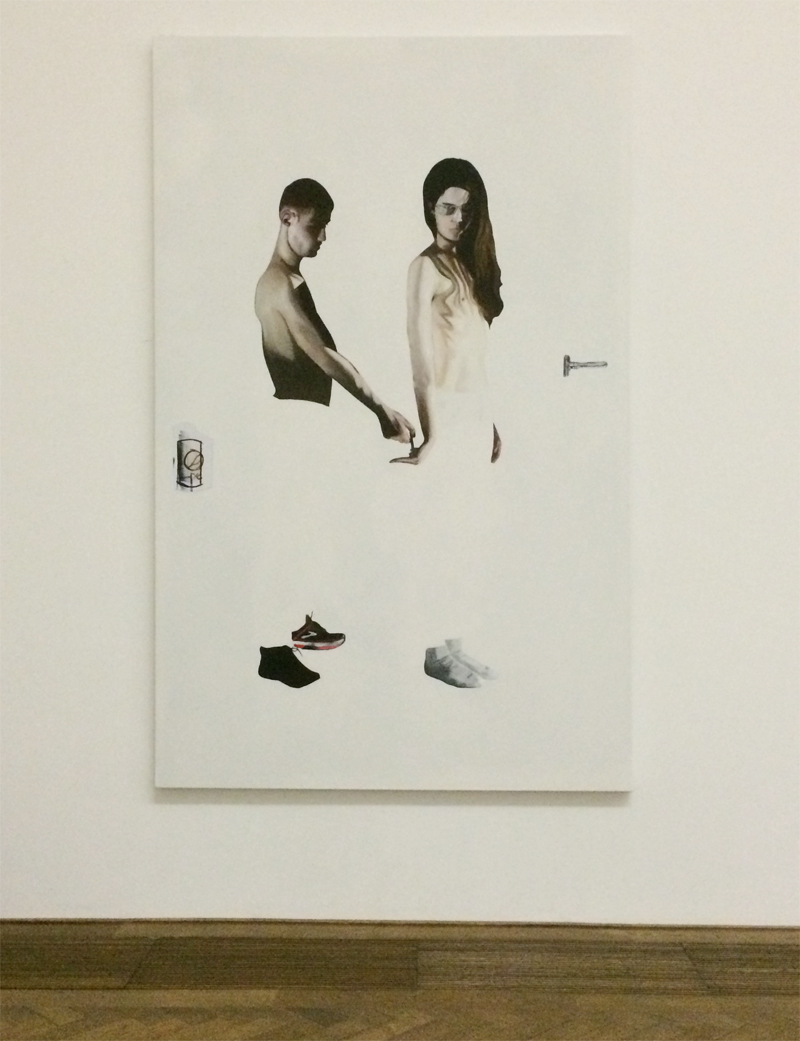 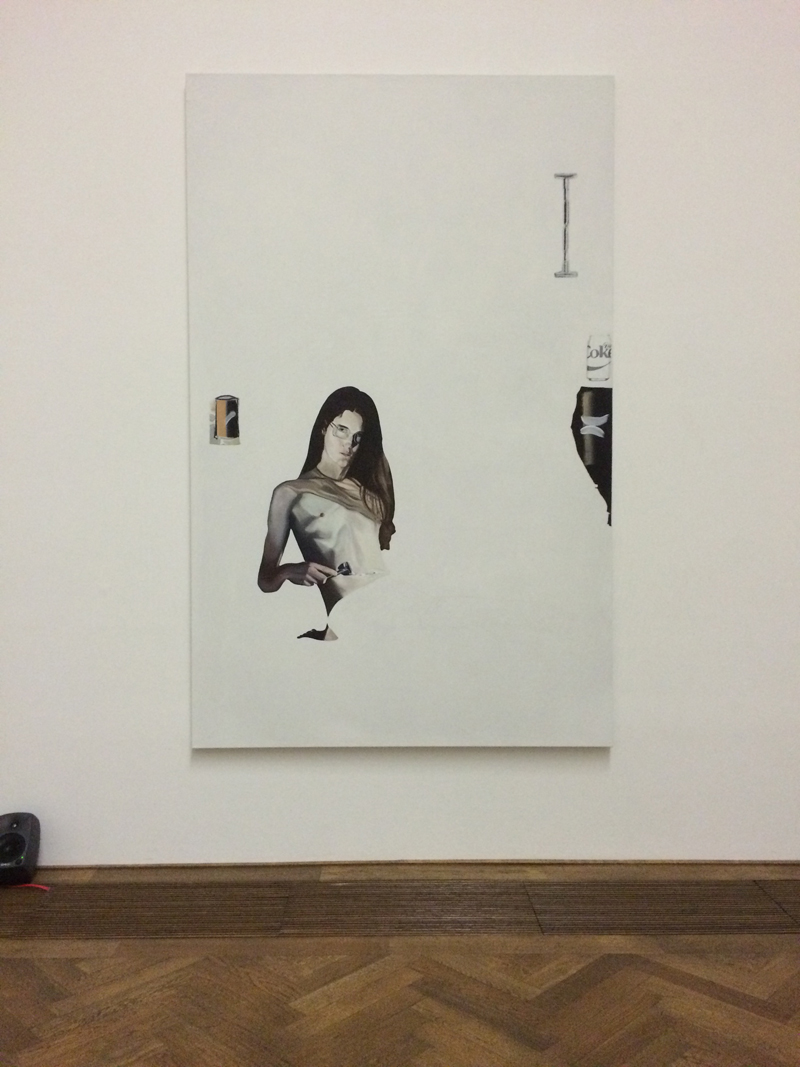 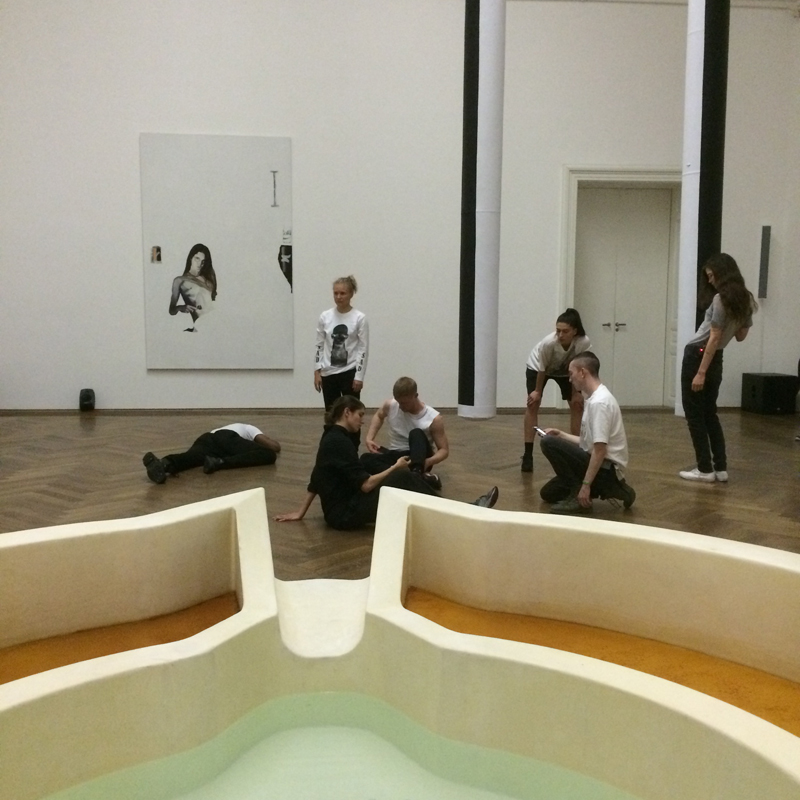 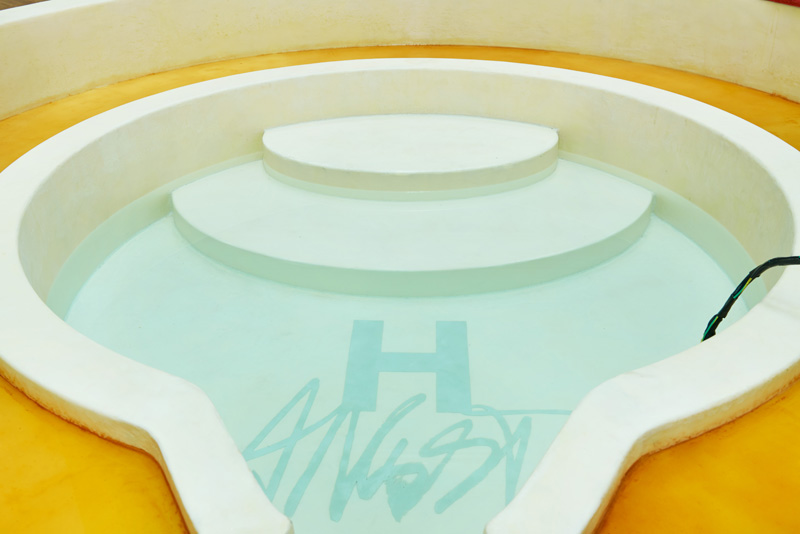 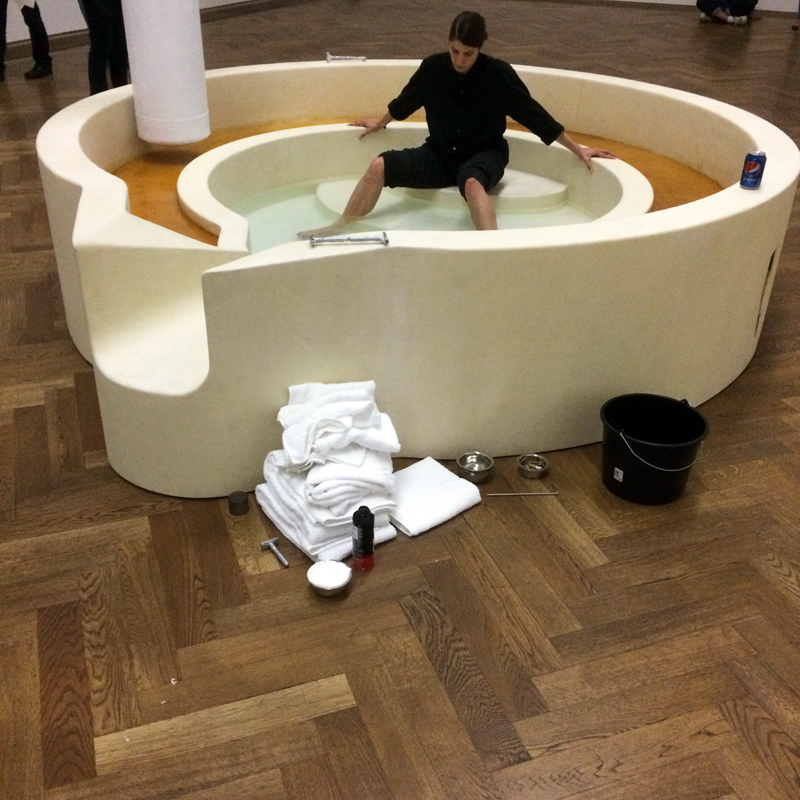 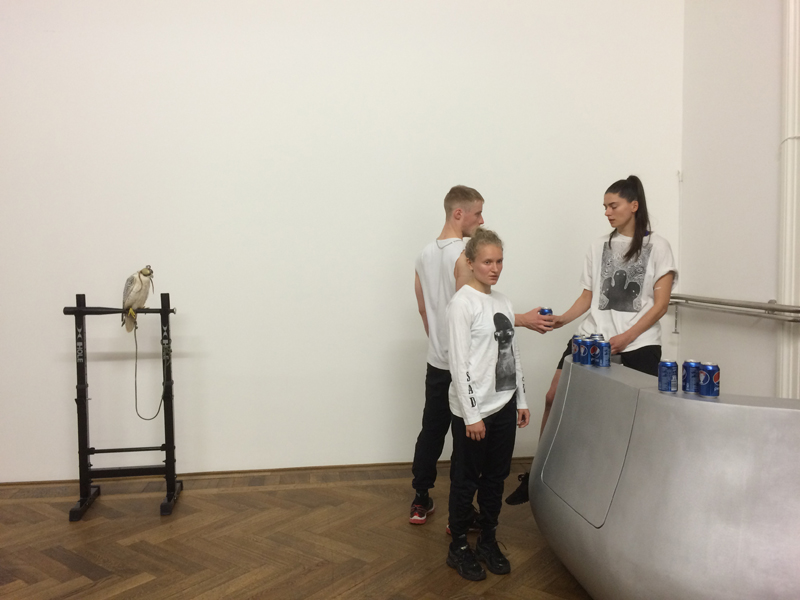 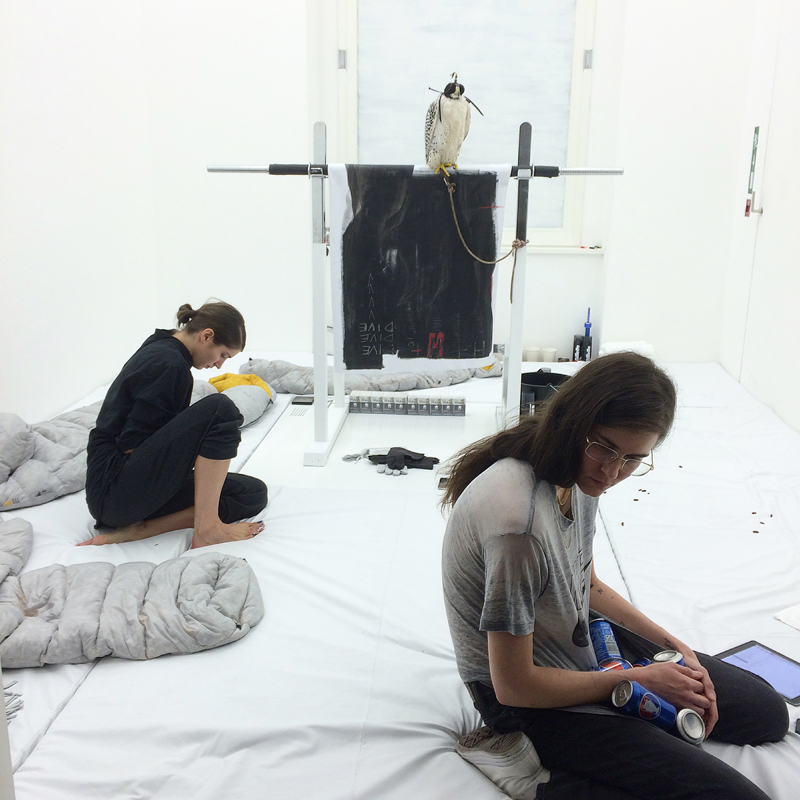 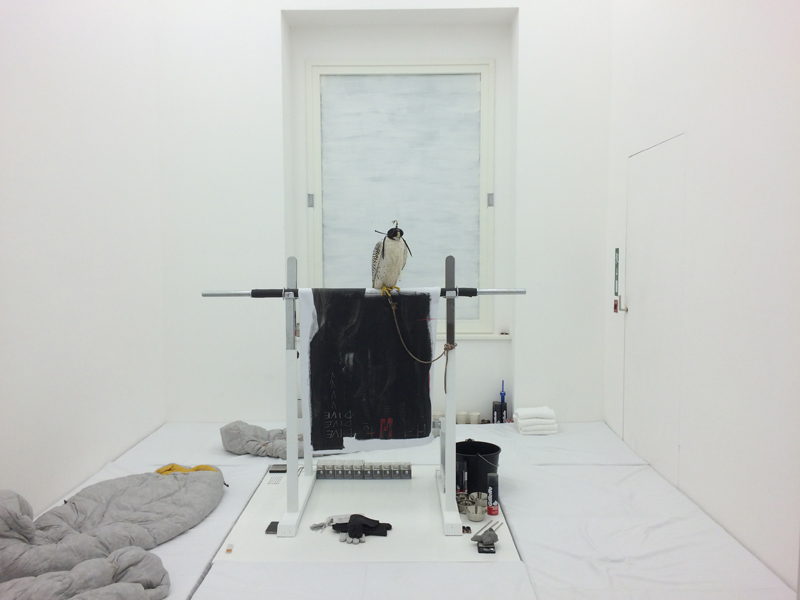 Additional photos are artlead’s own, taken with an iphone during the performance of The Lover on Sunday 12 June.