The artist Alicja Kwade (°1979, DE) uses different strategies in her work, based on thorough scientific-artistic research. She manipulates everyday objects and materials – a pallet, a bicycle, a door, a nightlight, a mirror – and turns them into new shapes which she presents as separate sculptures or installations. The result often feels introverted and formal, but also frequently has a humoristic undertone. Kwade creates sensory illusions that test our thought and perception. She pushes the viewer to contemplate the nature of objects and to question what is actually really ‘true’ in the reality that surrounds us.

Join us for a virtual tour through her current exhibition at de Appel arts centre, Amsterdam.

Time, and the way in which we measure time, are central themes in Alicja Kwade’s work. How does one experience the present, or the passing of time from past to future? In this work, Kwade places the hands of pocket watches on a white wall. As we walk past it, with every step we take, time passes. We go from hours to days. The passing of time flows over the wall, so to speak, and unveils a rhythm that refers to Isaac Newton’s concept of the obsoleteness of time. “True and mathematical (…), of itself, and from its own nature (flows) equably without regard to anything external.”

By subtly suggesting time with just the hands of clocks, Kwade simultaneously indicates how impossible it is to fully comprehend time with our limited every-day perception. 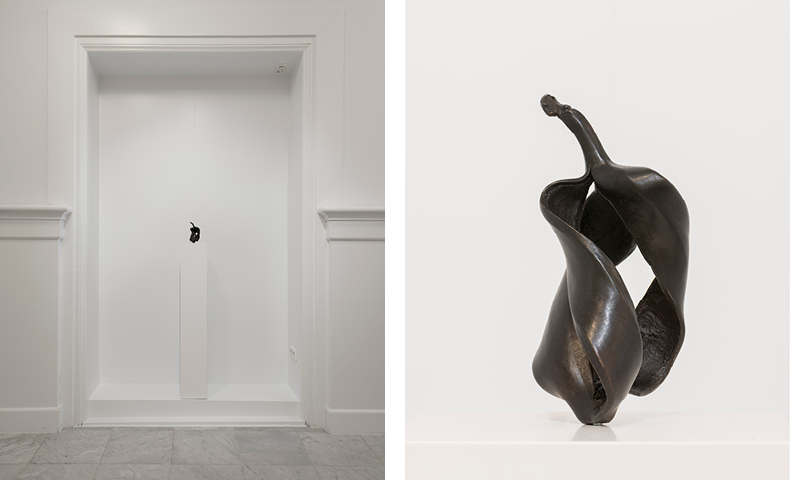 In her work, Kwade frequently reflects on the structures of reality, the essence of things. A quantum is the smallest particle in our cosmos. In these tiny particles the world looks completely different from reality, as we directly perceive it. Sometimes matter behaves as a wave, and sometimes as a particle, and it can even manifest itself in different states at once. In essence, everything is mobile and variable, yet static at the same time, just like a falling banana peel cast in bronze. 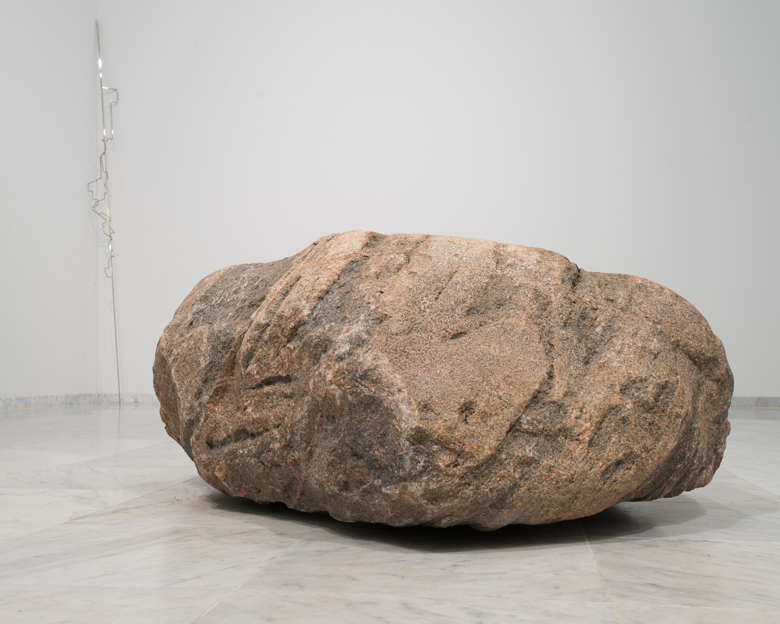 At first glance this appears to be a normal rock. Looking more carefully, however, you will notice that the rock (which weights approximately 700kg) is slowly turning on its axis; counter-clockwise, so against the rotation of the earth. For those who are patient: it takes the rock a total of 23 hours, 56 minutes and 4,099 seconds to make a complete rotation.

This is the exact same amount of time as a sidereal day, which is the amount of time it takes for the earth to rotate 360 degrees in relation to the fixed stars. The rock can be seen as the only thing on earth that is not moving and as such, exempt from the laws of physics.

This work is a part of the series Time Zone in which Kwade has immortalized the ways in which society has historically documented time in a brass and steel sculpture. Originally the different time zones of the world where divided by straight, vertical lines. However, due to geographical developments and international trade, the areas shifted into arbitrary borders. Only on the poles, territory that belongs to no one, the zones are still divided by straight borders.

Here, time manifests itself in a straight panel. Kwade shows that the division of time is artificial, a product of all sorts of political and economic structures, and conjures the question of other ways to give structure to time.

Eadem Mutata Resurgo, ‘changed and yet the same, I rise again’: the title of this piece could almost be a motto for Kwade’s oeuvre. Combined with the image of a spiral, these words first appeared on the tomb of Jacob Bernoulli (1654–1705). This Swiss mathematician did much research into the logarithmic spiral, a curved line that continues upon itself when drawn out. It is a shape that occurs frequently in nature, for example in the shells of snails or in our Milky Way. Inspired by this scientific natural phenomenon this sculpture was created. The shape seems paradoxical: a door is meant to close, but the spiral suggests infiniteness. It is as though Kwade is attempting to open a door to an alternate universe. 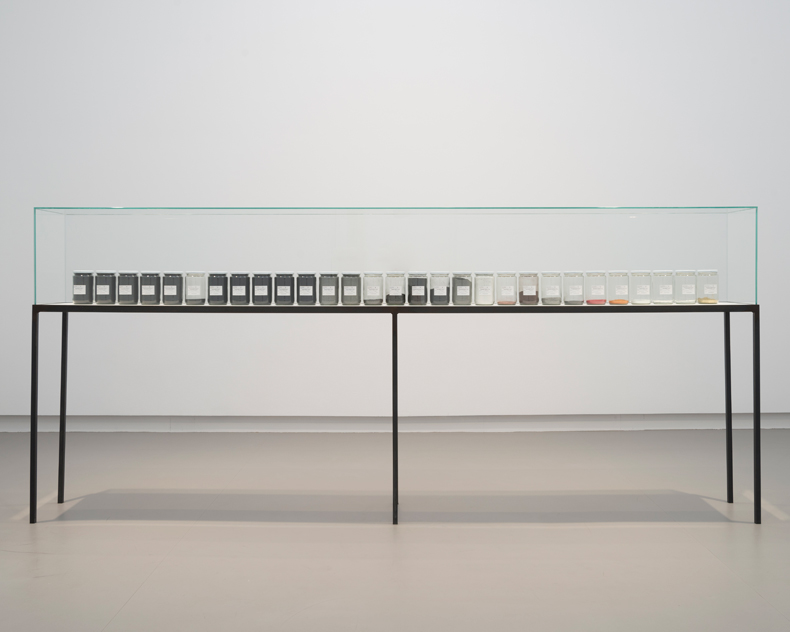 A Bicycle deconstructed into parts (each 0.5 mm) and pulverized, subsequently stored in 29 glass jars with labels

In this work, Alicja Kwade brings a bicycle back to its essence. First, she divided the bicycle into parts. All the ground materials (iron, rubber, aluminum, foam, textile, lacquer etc.) were then pulverized into 0.5 mm grains and divided over 29 jars that are presented alongside each other. Although the materials are the same, the body of the object has been transformed. What exactly are we looking at now? Not a bicycle, this much is clear, but without these materials the bicycle would have never existed in the first place. It is still present in memory. One could say that the material has but changed in appearance, a different exterior. Kwade exemplifies how the shape of objects generates meaning and value.